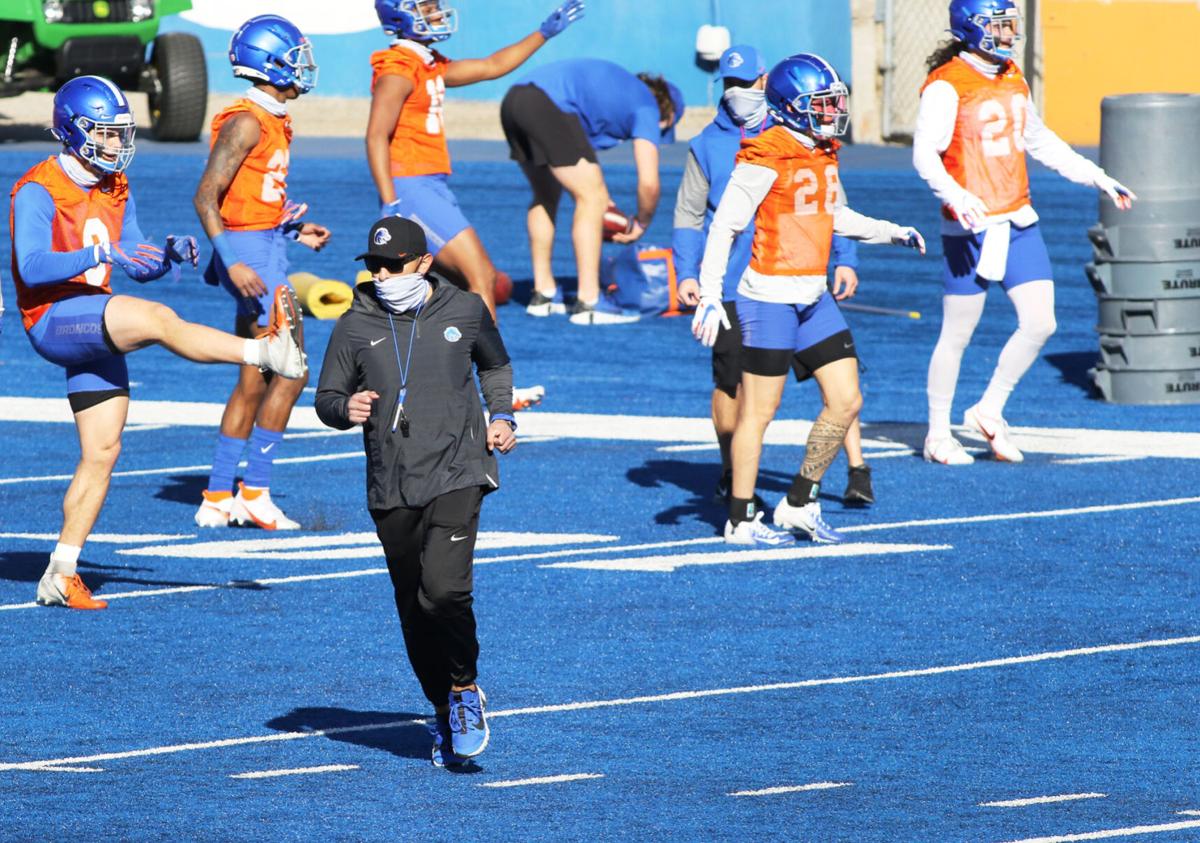 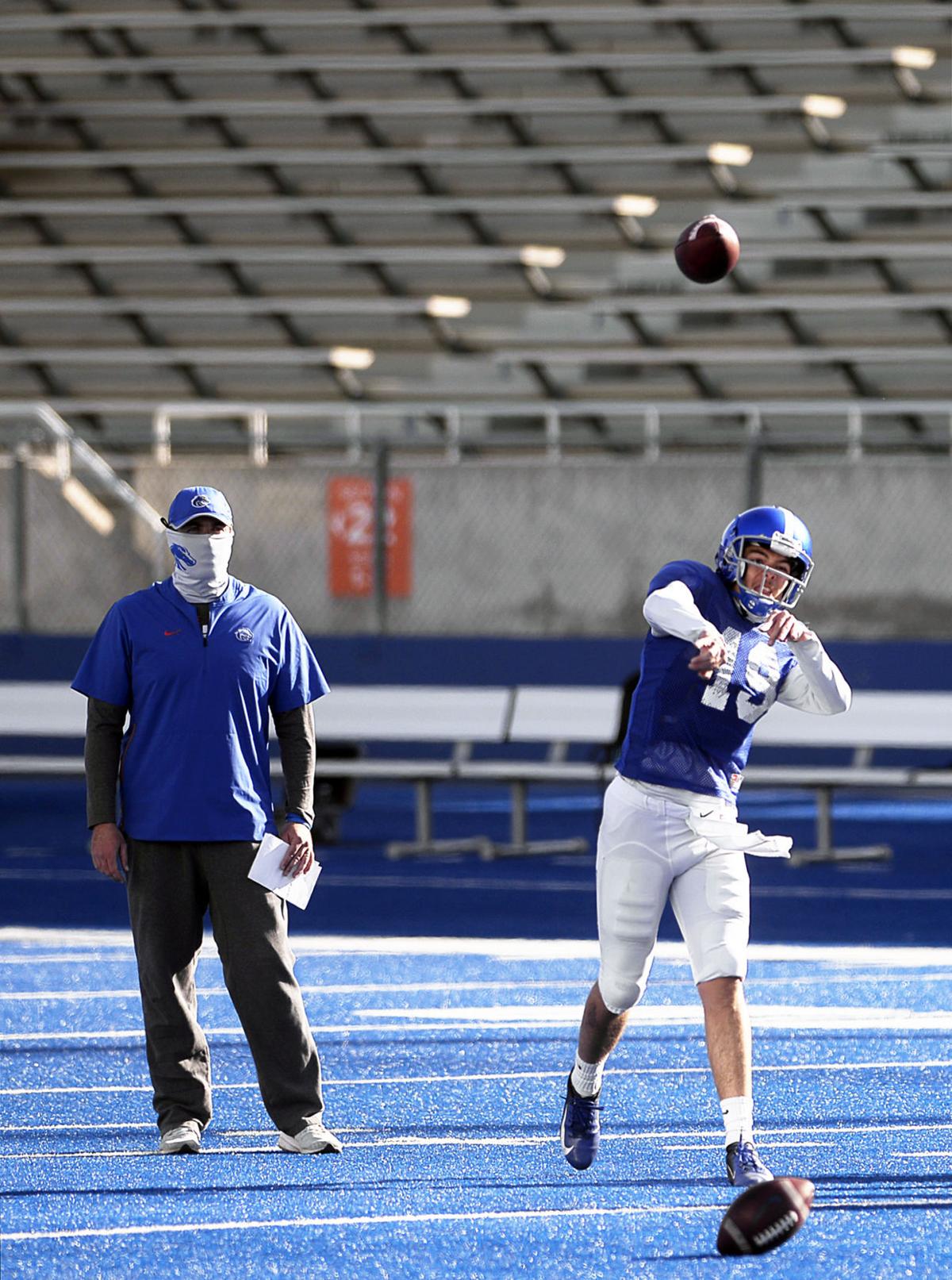 BOISE — The Boise State football team will conclude its 15 spring practices Saturday afternoon with a modified scrimmage for fans at 4 p.m. inside Albertsons Stadium.

The ‘spring game’ as it is traditionally known will allow more than 5,000 fans and media members the chance to see the changes to both the offense and defense brought on by new coach Andy Avalos.

Here’s four things to watch if you are one of the lucky ones to be in attendance:

QUARTERBACK BATTLEThis will top the storylines for the Broncos from now until the season opener against UCF on Sept. 4. Everyone likes a good quarterback battle — and the Broncos appear to have a good one. Incumbent Hank Bachmeier is 12-2 as a starter but has had his two years derailed by injuries and COVID-19. He enters his third year in the program in an open competition with former USC transfer Jack Sears, who lost the battle to Bachmeier last year but was very impressive in his only full game of action against Air Force. Filling in while Bachmeier was out with COVID-19, Sears completed 17 of 20 passes for 280 yards and three touchdowns. He started the following week against BYU but was knocked out due to a concussion early in the game. Bachmeier returned the following week and Sears ended up getting COVID-19 himself and didn’t play again the rest of the year. But both are back and healthy and apparently in a wide-open competition thanks to a fresh set of eyes and decision makers in Avalos and new offensive coordinator Tim Plough. Avalos said no decision will be made on a starter until this fall, but how the two look Saturday — and who gets more first team reps — could give us an idea as to the leader heading into the summer.

NEW OFFENSEPlough, the former UC Davis offensive coordinator, has brought his fast-paced, high-scoring offense with him as he starts his first season with the Broncos. What exactly is it going to look like and how different will it be from Boise State offenses in the past? Saturday may give us a good glimpse. Players and coaches have described the offense as much quicker and more multiple than years past. The Broncos won’t huddle much and will instead push the pace. They won’t substitute much in hopes of helping speed things up. Just how fast are we talking? We’ll see on Saturday. The offense itself appears to be based around the RPO (run-pass option) craze that has become more and more popular in college football. The quarterbacks have several options on every play, including the chance to either run or pass the ball based on what the defense does. If a quarterback elects to throw there will be several options for him — many of which will be shorter passes with hopes of gaining more yards after the catch. But these descriptions come from what others have said and not what the Broncos have shown with much of spring camp closed to the media, so Saturday should be a nice look at what is to come this fall.

DEFENSIVE LINEThe defensive line has consistently been the group mentioned most this spring when players and coaches have talked about the positives. Tackles Scott Matlock and Scale Igiehon have been talked about maybe more than anyone else on the team as standouts. Avalos mentioned both again on Wednesday. A year ago the Broncos had to cancel a game against San Jose State due to a lack of depth along the defensive line from injuries and COVID-19.

The depth appears to be much stronger heading into the season. In addition to Matlock and Igiehon, the Broncos have a number of talented players along the line in nose tackles Divine Obichere, Keeghan Freeborn and Herbert Gums, defensive end Shane Irwin and STUDs Isaiah Bagnah and Casey Kline. And that group doesn’t even include starting defensive end Demitri Washington, who is out this spring due to an injury but should be ready to go by the fall. Even quarterback Hank Bachmeier gave praise to the defensive line earlier this week, saying the pressure they are bringing has made things tougher on the offense and in particular the passing game. Former defensive line coach Spencer Danielson is now the defensive coordinator, while former Vanderbilt and Utah State defensive line coach Frank Maile is now leading the group up front. The defensive line could cause a lot of problems for offenses next season — and that includes Saturday against Boise State’s offense.

GAMEDAY ATMOSPHEREAs many as 6,300 fans could be inside Albertsons Stadium — the most since 23,561 watched Boise State beat Hawaii in the Mountain West Championship on Dec. 7, 2019. Boise State only had three home games last season and one was played with no fans. The other two had just 1,100. Fans will be seated in predetermined socially distanced pods of two, four or six tickets spread out throughout the stadium. Gates will open at 2:30 to give ample time for fans to socially distance while entering the stadiums. Masks will be required at all times inside the stadium. Limited, pre-packaged concessions will be available for purchase. After playing in mostly empty stadiums last season — and not even having a spring game in 2020 — it should feel more like an actual football game atmosphere. “It’s been a long time since we’ve had some fans,” Bachmeier said. “This is going to be like a sellout crowd compared to (before). It’s been a really long time, so it’s going to be awesome to have fans and for the spring game to happen.” Parking is free but tailgating is not allowed outside the stadium prior to the game.