In this May 11, 2016, photo, the sun rises over Oahu’s Hanauma Bay near Honolulu. Boise State will play Hawaii today at Aloha Stadium in Honolulu. 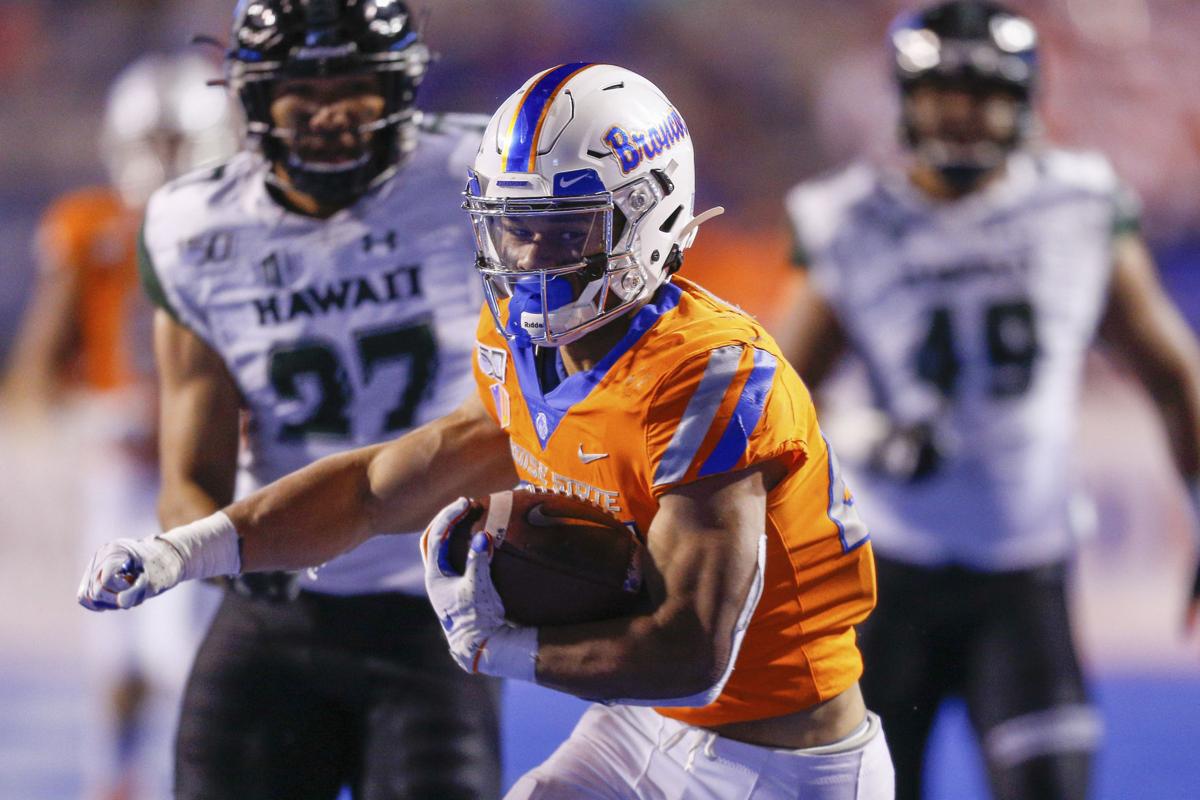 Boise State running back George Holani (24) dives into the end zone on a 40-yard touchdown run against Hawaii in a game Oct. 13, 2019. 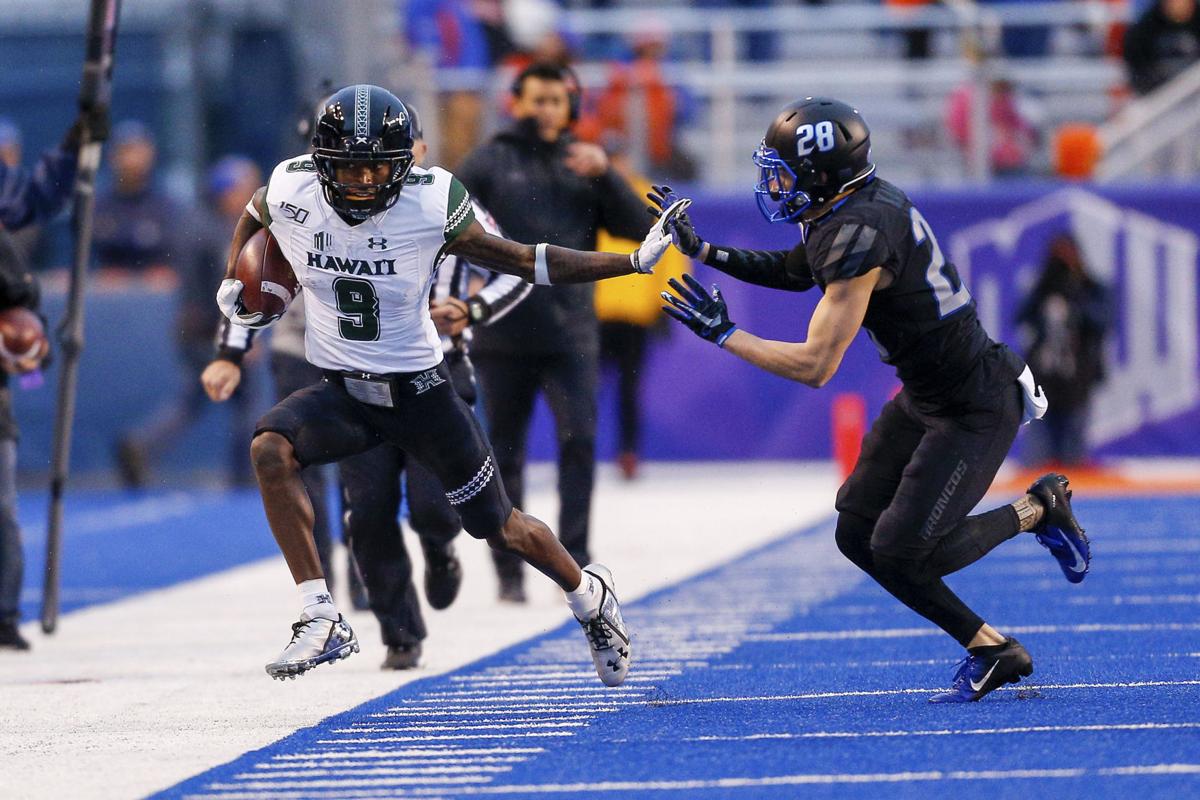 Hawaii wide receiver JoJo Ward (9) runs with the ball as Boise State defensive back Kekaula Kaniho (28) pushes him out of bounds during the Mountain West Championship Dec. 7, 2019.

In this May 11, 2016, photo, the sun rises over Oahu’s Hanauma Bay near Honolulu. Boise State will play Hawaii today at Aloha Stadium in Honolulu.

Boise State running back George Holani (24) dives into the end zone on a 40-yard touchdown run against Hawaii in a game Oct. 13, 2019.

Hawaii wide receiver JoJo Ward (9) runs with the ball as Boise State defensive back Kekaula Kaniho (28) pushes him out of bounds during the Mountain West Championship Dec. 7, 2019.

How different will the trip to Hawaii be for the Boise State football team?

The two Hawaii natives on the team, brothers Kekaula and Kaonohi Kaniho, may not even be able to see their family while in town.

Strict COVID-19 restrictions in Honolulu have forced the Broncos to alter their trip, and that means potentially not even allowing players to see family members in the lobby of the hotel before the game.

“This was the game my family had circled back four years ago when we knew we’d be coming here my senior year and especially when my brother committed it would be both of us playing back home on the same team together,” Kekaula Kaniho said. “It’s going to be a bummer. It was going to basically be the whole island coming to support us.”

Boise State has had to navigate a number of issues stemming from a six-hour flight across the Pacific Ocean in the middle of a pandemic. The Broncos typically would fly on Thursday to have the extra day to get used to the three-hour time difference and the change in weather, but didn’t leave this time until Friday afternoon.

That leaves the Broncos only about 24 hours from touchdown to kickoff, a short turnaround both mentally and physically for a bunch of large human beings crammed into small airplane seats for six hours.

“A lot of times we’d get there and have a practice and get acclimated a little bit and let our bodies recover from the travel and then go do something, maybe on Thursday night or Friday morning do something fun as a team like walk along the beach or let the guys go for a couple hours, but that experience is going to be different now,” Boise State coach Bryan Harsin said. “We’re going to fly there, get off, go eat, have meetings, and go to bed. We’ll wake up, have meetings, go to our room, have pregame meal and leave to go play the game.”

Boise State’s traveling party has been instructed not to leave the team hotel from the time they arrive on Friday evening until when they board the bus to head for the stadium on Saturday.

“Based off what is happening in Hawaii I think it’s best for us,” Harsin said. “We’re going to be respectful of what they are asking us to do, just basically show up, play the game and leave. That’s really our focus.”

Nobody on Boise State’s roster has played a game at Hawaii and only a handful of players or coaches have ever been there even for vacation.

“Last time I was in Hawaii I was on my honeymoon and that was a long time ago. This is a much different situation,” defensive coordinator Jeff Schmedding said. “The quick turnaround kind of is what it is. It’s due to a few things obviously with the situation that we’re in. It’s not like you can land a day early and go do anything.”

While a trip for a bowl game or even a normal arrival two days early would typically provide the players a rare chance to experience Hawaii, they’ll now get to see the beach two times — when they land and when they take off.

“It’s a business trip for us so we’re not really worried about exploring the island,” cornerback Jalen Walker said. “COVID is happening and there’s a lock down so we can’t really go out or do anything. We just want to go over there, be focused and do our job.”

Boise State has done a good job in this situation in the past, winning three straight games against Hawaii on the island by an average of nearly 40 points per game. But the Broncos had the extra day to prepare for those three matchups, and more time to recuperate following the six-hour flight.

“Obviously it’s a long flight, but we’re going to act like it is any away game and treat it with a Swat Team mentality,” Williams said. “Get in, get our dub (win) and get out.”

The Broncos played Hawaii twice last season in Boise and won both games, including a 31-10 victory in the Mountain West title game. Hawaii coach Nick Rolovich left for Washington State after the season, and former Tulsa, Pittsburgh and Arizona State coach Todd Graham is 2-2 in his first year.

Boise State is coming off an impressive 52-21 win against Colorado State last Thursday when the Broncos blocked three kicks for touchdowns in the same game for the first time in program history.

The Broncos have won eight straight against Hawaii, but they’re dealing with a number of factors including the short turnaround and the absence of several players due to COVID protocols that figure to make the game no easy task.

“They are a really good home team,” offensive coordinator Eric Kiesau said. “Over the years Hawaii has always played better at home. I don’t know if it’s because they don’t have to travel and they feel more settled in or what, but this will be a big challenge for us. We have to come and play our best.”

As for the Kaniho family, Kekuala is hopeful his parents and others will at least be able to wave to them from the parking lot of the hotel when they arrive in town or as they leave for the game. The younger Kaniho has a young daughter that still lives on the island that he is hoping to be able to see.

Normally this would have been the trip of the lifetime for the Kaniho family and the Broncos. Now they hope to just make the most of it.

“We’re hoping they can at least stop by the hotel or maybe wave signs or something from the outside,” said Kekaula Kaniho, who noted their family is hoping to fly to Boise for Thanksgiving next week. “We’re hoping we can see them for a little bit, but we understand everything that’s going on and if they don’t get to see us it’s alright.”

A Boise State win would make it all worth it.