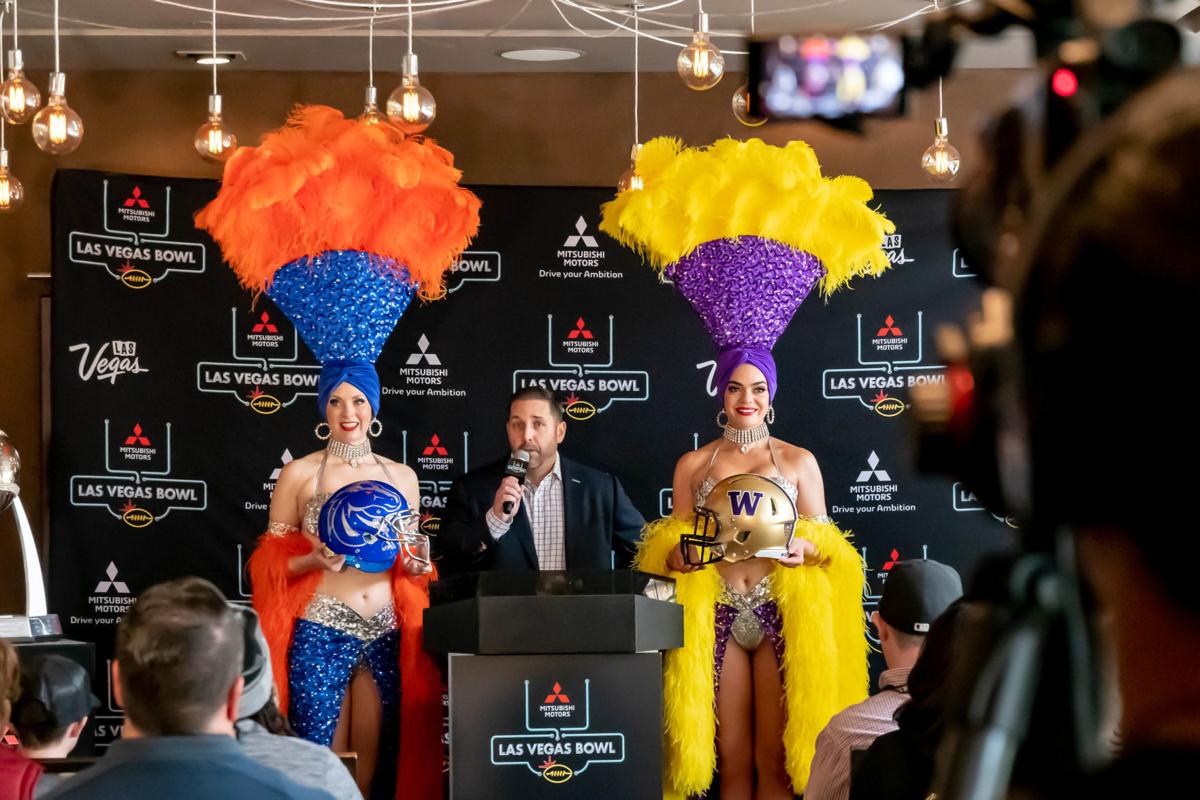 Las Vegas Bowl executive director John Saccenti announces Boise State and Washington as the two participants in the 2019 Las Vegas Bowl during a press conference on Sunday in Las Vegas. 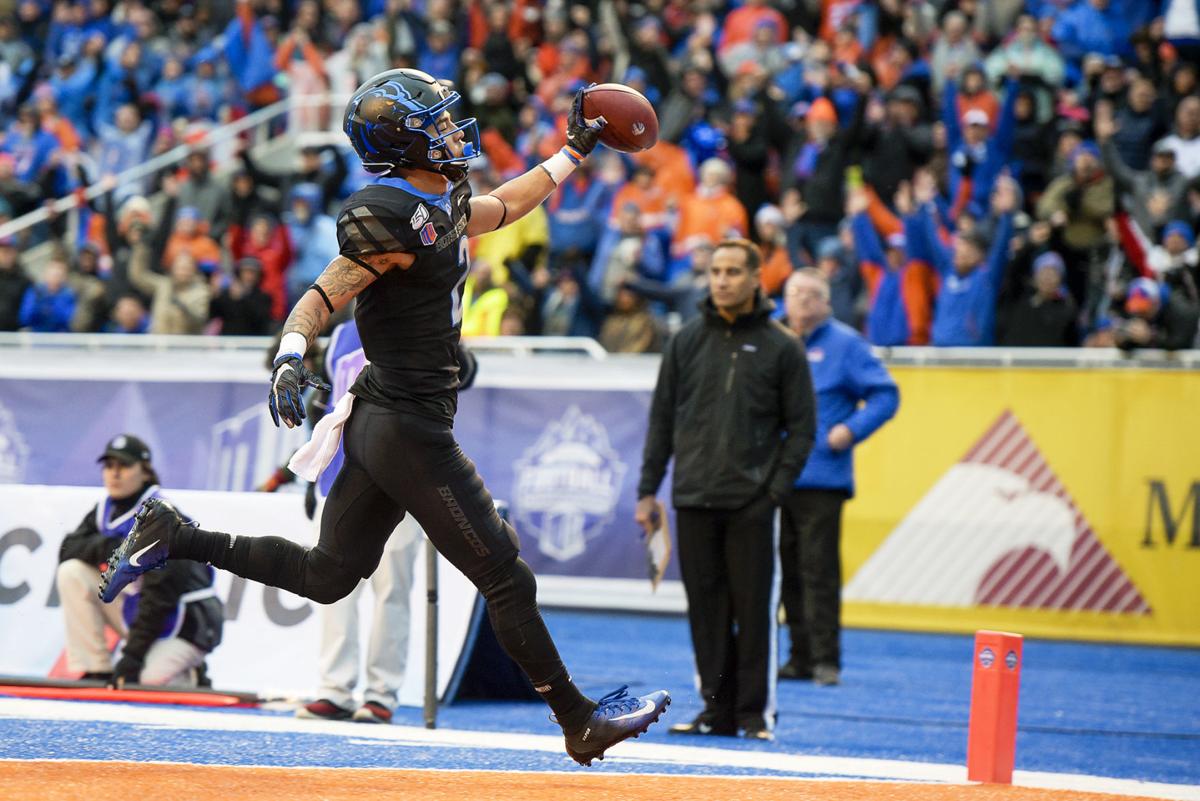 Boise State wide receiver Khalil Shakir (2) runs into the end zone for a touchdown during the Mountain West Conference championship game against Hawai’i on Saturday, Dec. 7 at Albertsons Stadium in Boise. BSU won the game 31-10.

Las Vegas Bowl executive director John Saccenti announces Boise State and Washington as the two participants in the 2019 Las Vegas Bowl during a press conference on Sunday in Las Vegas.

Boise State wide receiver Khalil Shakir (2) runs into the end zone for a touchdown during the Mountain West Conference championship game against Hawai’i on Saturday, Dec. 7 at Albertsons Stadium in Boise. BSU won the game 31-10.

The Boise State football team will help send off former coach Chris Petersen when the Broncos and the Washington Huskies meet in the Las Vegas Bowl on Dec. 21.

Petersen, who went 92-12 and won two Fiesta Bowls as Boise State’s head coach from 2006-2013, announced recently that he will step down following the bowl game to “recharge” after 15 consecutive seasons as head coach.

“There’s a lot of other teams I’d probably like to be playing for this last time,” Petersen said at a press conference. “But it is what it is. It’s interesting how sometimes these things work out.”

Boise State coach Bryan Harsin, a former assistant coach under Petersen, also didn’t seem overly thrilled about the matchup when speaking shortly after it was announced on Sunday.

“There’s an obvious storyline in this game,” Boise State coach Bryan Harsin said. “It is what it is. ... The most important thing that we all have to consider is not overshadowing the players that are actually going to play in this game, which is going to be a shame if the story continues to be not about the game and the players playing in it.”

Unfortunately for all parties involved, there’s no way to avoid it given Petersen’s history with Boise State.

Many Washington assistant coaches also previously coached at Boise State, and Harsin was the offensive coordinator for Petersen for Fiesta Bowl wins in both 2007 and 2010.

“I could already tell what’s going to be said about the game,” senior captain David Moa said when he heard about the matchup. “I’m just very excited. I can promise this team is also.”

Sure, the Broncos wanted to land in the Cotton Bowl as the top-ranked Group of 5 team, but a nationally televised game in Las Vegas against a solid Pac-12 team is not a bad consolation prize.

The Las Vegas Bowl will kick off on Dec. 21 from Sam Boyd Stadium at 5:30 p.m. MT on ABC. Rece Davis and Kirk Herbstreit will be on the call, providing the Broncos with an opportunity to make yet another statement on the national stage.

“This is a big bowl game,” Harsin said. “Let’s be honest about it. Boise State and Washington, where we’re playing — one of the best places to play. The time of year, the time slot, where it’s at, with weather and things like that, it’s really one of the better bowl games.

“And the two opponents that are in it right now, there’s a lot of things to really like about the two teams and the opportunities that both teams have.”

Boise State (12-1) capped an undefeated Mountain West season with a 31-10 win over Hawaii in the Mountain West Championship on Saturday evening.

The Mountain West champion typically goes to the Las Vegas Bowl to play the No. 6 team from the Pac-12. Thanks to the Pac-12 only getting one team in the New Year’s Six after Utah’s loss to Oregon, Washington slid down and became an option in Las Vegas. It was a no-brainer for the Las Vegas Bowl to choose them over Washington State given the connection between Petersen and Boise State.

It will mark the second trip to the Las Vegas Bowl in three years for the Broncos, who beat Oregon 38-28 in the 2017 Las Vegas Bowl. It’s their fifth appearance in the last 10 years in the game, and probably their last. The Las Vegas Bowl will end ties with the Mountain West starting in 2020.

This will be Boise State’s last football game in Las Vegas until 2023 when they play at UNLV in the new Raiders stadium.

“We always travel well at the Vegas Bowl,” Harsin said. “That’s one of the benefits. I think this game will travel well, Boise fans being there. I think it will be a great matchup, I really do. Washington is really good, and I think our season has shown that we’re very good. That’s what you want to have in a bowl game at the end of the year, two good teams playing against each other in an exciting matchup.”

Washington (7-5) lost four of its final seven games to end the regular season, including a stunning 20-14 loss at Colorado on Nov. 23. They lost close games to both Oregon and Utah, and also lost to Stanford and California.

The Huskies already named defensive coordinator Jimmy Lake as the next head coach, but his duties will start following the bowl game. Lake was a former Boise State assistant coach during the 2012 and 2013 seasons.

Who knows if Petersen will ever coach again, but it seems fitting that his last game (for now) is against Boise State. Petersen spent 13 seasons with the Broncos, including five as offensive coordinator from 2001-05. He was promoted to head coach in 2006 when Dan Hawkins left for Colorado.

Petersen left for Washington after the 2013 season and the Broncos hired Harsin to replace him. The two worked together for 10 seasons at Boise State before Harsin left in 2011 to be the co-offensive coordinator at Texas.

Boise State will be looking for its first 13-win season since they went 14-0 and won the Fiesta Bowl in 2009.

“I’m excited,” safety Kekoa Nawahine said. “They are a good team and I know it’s going to be a fun, exciting bowl game. ... The preparation starts now. We don’t have much time, which is exciting. We have a game coming up quick.”

Petersen coached Boise State in three Las Vegas Bowls in 2010, 2011 and 2012. He has faced the Broncos once since going to Washington, when the Huskies came to Boise in 2015.

Boise State’s players and coaches found out about the trip to Las Vegas and the matchup with Washington during the annual team banquet on Sunday afternoon. Harsin informed the group once the matchup was official.

“Everybody clapped their hands because we knew we were going to face a really good opponent,” Moa said. “I think everybody was just very, very excited for this opportunity.”

Tickets in Boise State’s allotment are $81.75 and can be purchased at BroncoSports.com. The host hotel for the Broncos is the Hard Rock Hotel and Casino just off the strip.