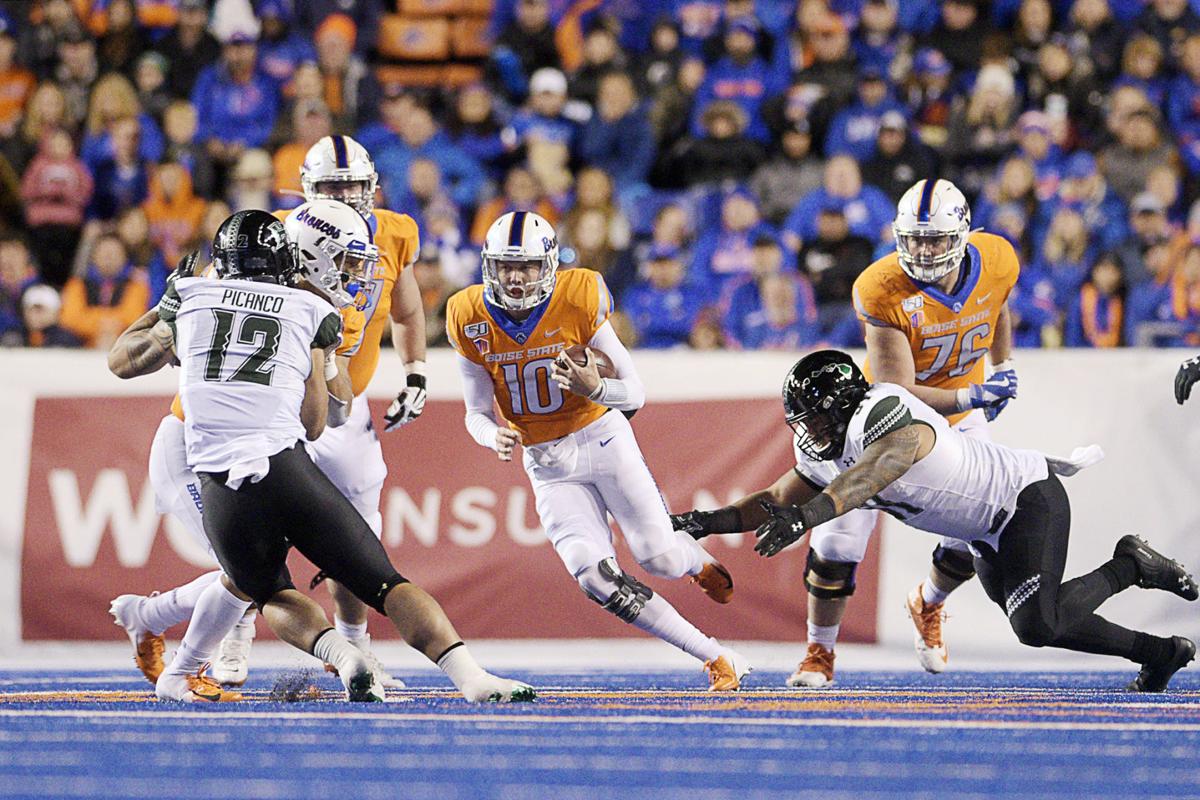 Boise State quarterback Chase Cord (10) scrambles during the game against Hawaii on Saturday at Albertson’s Stadium in Boise. 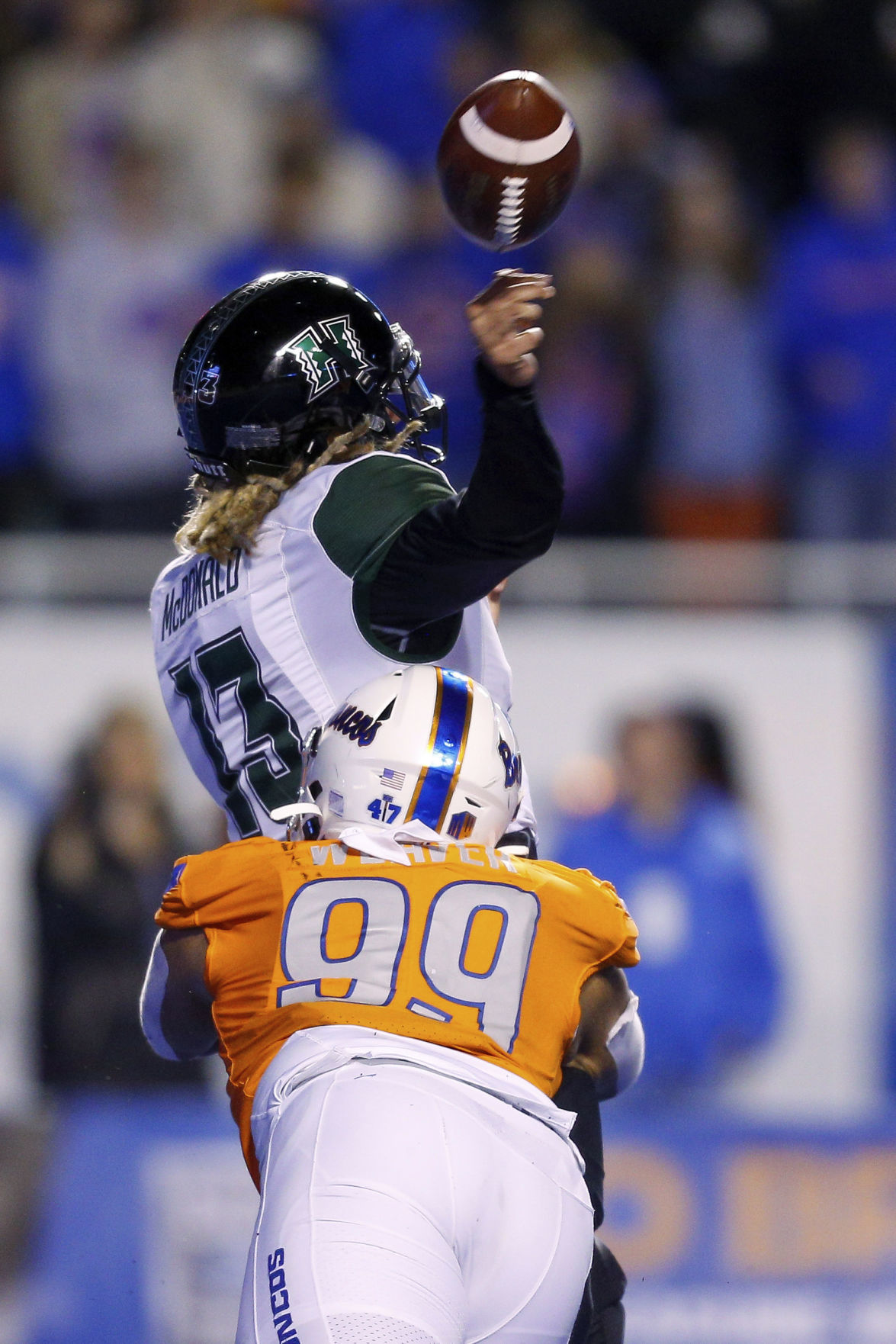 Hawaii quarterback Cole McDonald (13) has the ball knocked free by Boise State linebacker Curtis Weaver (99) during a game on Oct. 12 at Albertsons Stadium. 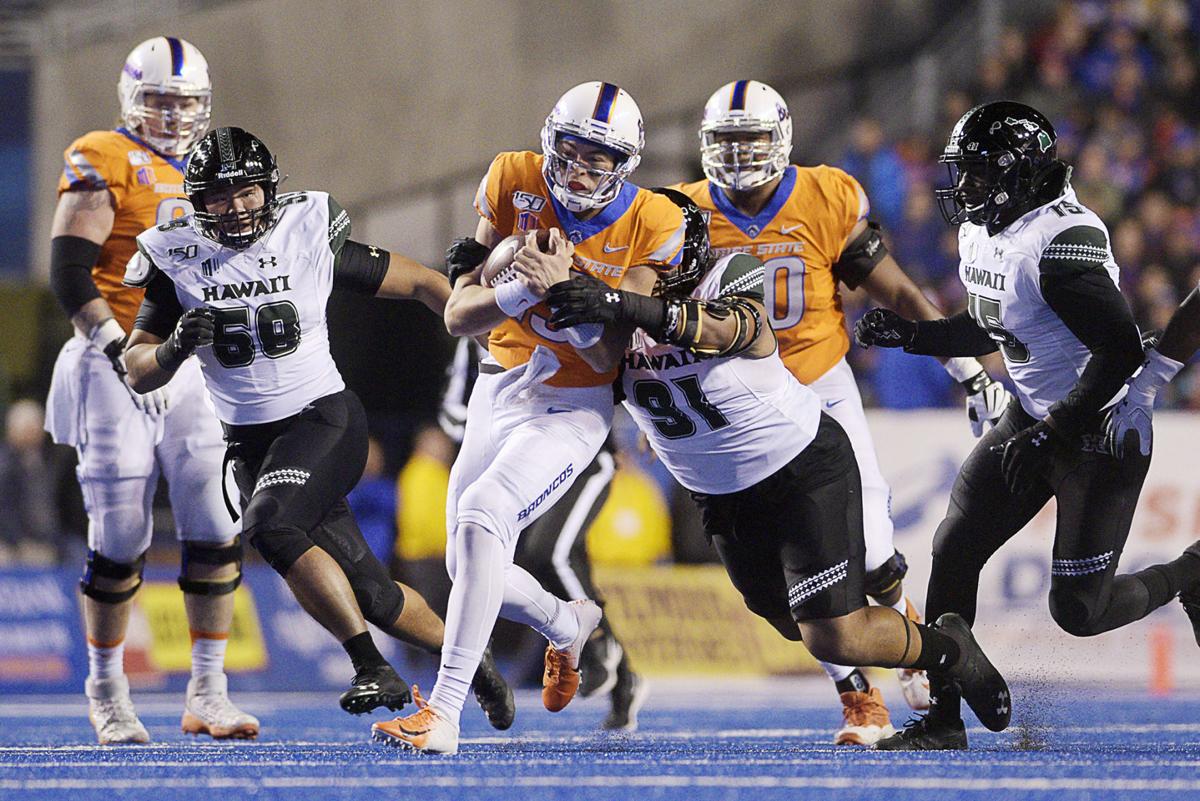 Boise State quarterback Hank Bachmeier (19) scrambles the ball on the play during the first half of the game against Hawaii on Saturday at Albertson’s Stadium in Boise.

Boise State quarterback Chase Cord (10) scrambles during the game against Hawaii on Saturday at Albertson’s Stadium in Boise.

Hawaii quarterback Cole McDonald (13) has the ball knocked free by Boise State linebacker Curtis Weaver (99) during a game on Oct. 12 at Albertsons Stadium.

Boise State quarterback Hank Bachmeier (19) scrambles the ball on the play during the first half of the game against Hawaii on Saturday at Albertson’s Stadium in Boise.

Bachmeier was injured in the second quarter of Boise State’s 59-37 win over the Hawaii Rainbow Warriors at Albertsons Stadium.

Coach Bryan Harsin confirmed the injury was non season-ending and speculated it might be a 'hip pointer', but didn't elaborate on his status for next week's game at BYU.

The blow was softened some by the play of backup quarterback Chase Cord, who took over and threw three touchdown passes to help the 14th-ranked Broncos improve to 6-0 on the season.

Even third-string quarterback Jaylon Henderson joined the fun, tossing a 25-yard touchdown pass to George Holani in the third quarter.

Cord lost out to Bachmeier for the starting job during fall camp, but looked more than capable Saturday should he be needed to fill in moving forward. The redshirt sophomore completed 12 of 18 passes for 175 yards and three touchdowns.

"I think Chase played exceptionally well tonight," Harsin said. "He hit a few big plays in there. Chase has good command when he's in there. I think that's one thing he shows when you watch him play the position, he's got good command and good feel.

"I liked what Jaylon did and what Chase did. ... Those guys are ready to go."

The injury to Bachmeier dampened things some, but the win was one of Boise State’s better performances of the season. Hawaii came in with the highest-scoring offense in the conference and one of the best passing attacks in the country, but the Boise State defense forced four turnovers and held the Warriors well below their season averages for points, total yards and passing yards.

Holani had nine rushes for 64 yards and a touchdown also had three catches for 38 yards and two more scores. The three touchdowns were a career high for the true freshman running back.

John Hightower had seven catches for 141 yards and two touchdowns to lead the Boise State offense, while Khalil Shakir had three catches for 57 yards and a touchdown.

Boise State was leading 17-7 early in the second quarter when Bachmeier was hit by Hawaii linebacker Kana’i Picanco while attempting to run for a first down near the Warriors’ 20-yard line. Bachmeier fumbled the ball on the play, and Hawaii recovered.

There was concern in recent weeks over the high number of hits Bachmeier has been taking. He had the first down before appearing to be hit hard in the ribs or hip, and remained on the turf for a minute before being helped off the field.

Bachmeier went into the medical tent, where he remained for several minutes. He was eventually helped to the nearby Idaho Sports Medicine Institute in the southwest corner of the stadium, presumably for further testing. He walked gingerly back to the locker room late in the second quarter, and was seen back on the sideline in the second half wearing Boise State sweats.

"It's tough seeing somebody go down, but all the quarterbacks have been preparing and they all know what they are doing," Hightower said. "They are all capable. ... We have confidence in all our quarterbacks. No matter who is back there we know that they are going to get the job done."

Boise State took a 7-0 lead on a 5-yard run from Shakir out of the wildcat formation just 4:01 into the game. Shakir was one of five players to take a snap as quarterback during the first half.

Hawaii native Kekaula Kaniho then forced a fumble and recovered it for the Broncos to set up another score. Bachmeier found Hightower for a 26-yard touchdown to make it 14-0 with 8:20 left in the first quarter. Bachmeier was 3 of 9 for 58 yards and a touchdown before leaving the game.

Cord took over for Bachmeier with the Broncos leading 17-7 in the second quarter. He found Shakir for a 33-yard touchdown pass with 5:52 left before halftime to up the lead to 24-7.

Robert Mahone then scored on a 13-yard run to make it 31-7 with 2:26 left in the second quarter, but Hawaii’s Melquise Stovall found the end zone on a 21-yard pass from Cole McDonald with 41 seconds left before the half to make it 31-14 at the break.

Cord continued his strong play on the opening drive of the third quarter, finding Hightower for a 42-yard touchdown to up the Boise State lead to 38-14 just 2:35 into the second half.

Henderson’s 25-yard touchdown pass to Holani made it 45-14 with 8:24 left in the third quarter, and Cord found Holani for an 8-yard score to make it 52-21 on the final play of the third quarter.

Bachmeier, Cord and Henderson all had touchdown passes to mark the first time Boise State had three different players throw touchdown passes in the same game since they had four do it on Nov. 8, 2008, in a 49-14 home win against Utah State. In that game Kellen Moore threw two touchdowns, while Tanyon Bissell, Vinny Perretta and Mike Coughlin each had one.

"Hank went down but we know it's next man up and Chase and Jaylon came in and did a great job," Boise State STUD Curtis Weaver said. "There was no drop off there."

Boise State entered the game ranked No. 14 in both major polls but will likely move up at least one spot when the new polls come out. No. 11 Texas lost to No. 6 Oklahoma and should fall behind the Broncos in the rankings.

But much of the concern and attention in the immediate future will be on the star quarterback Bachmeier, who ranked second in the Mountain West in most quarterback statistics including passing yards and passing touchdowns entering the game.

Up next for Boise State is a road game at BYU next Saturday in what figures to be a hostile environment with the undefeated Broncos coming to town. Kick off from LaVell Edwards Stadium in Provo is set for 8:15 p.m. and the game will be televised nationally on ESPN2.