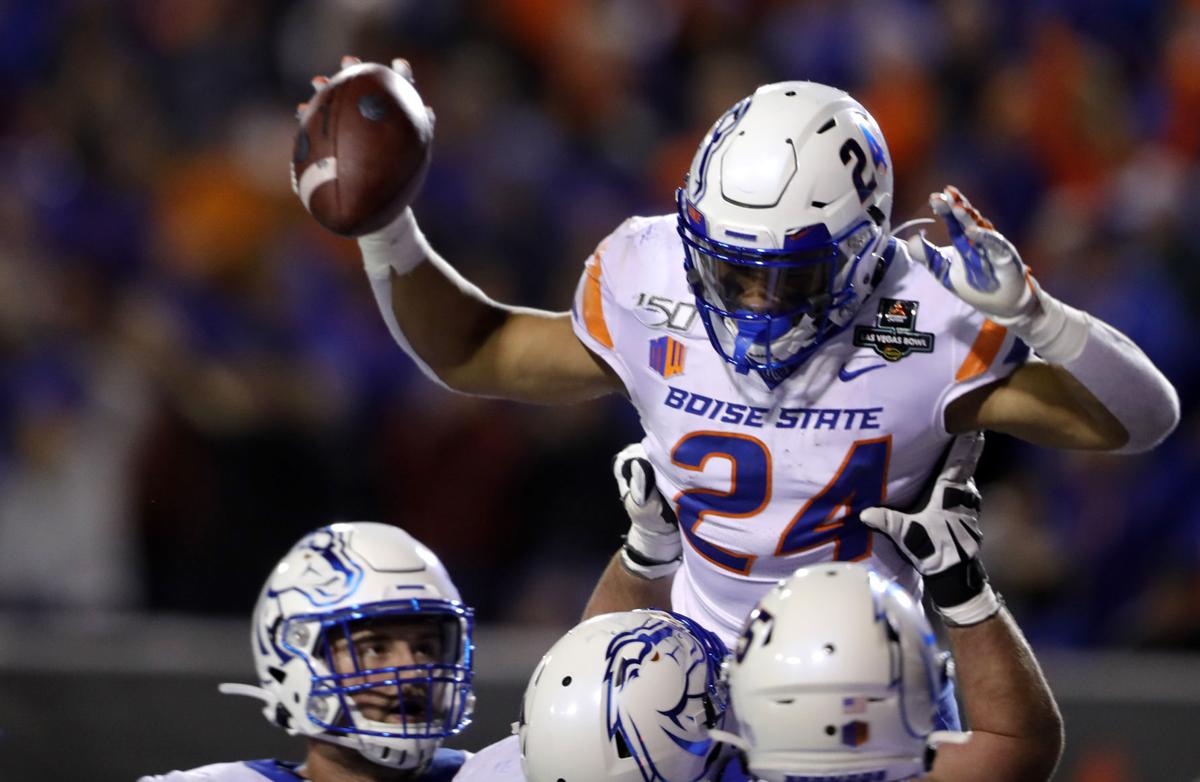 Boise State running back George Holani (24) and teammates celebrate his touchdown during the Las Vegas Bowl on Dec. 21. 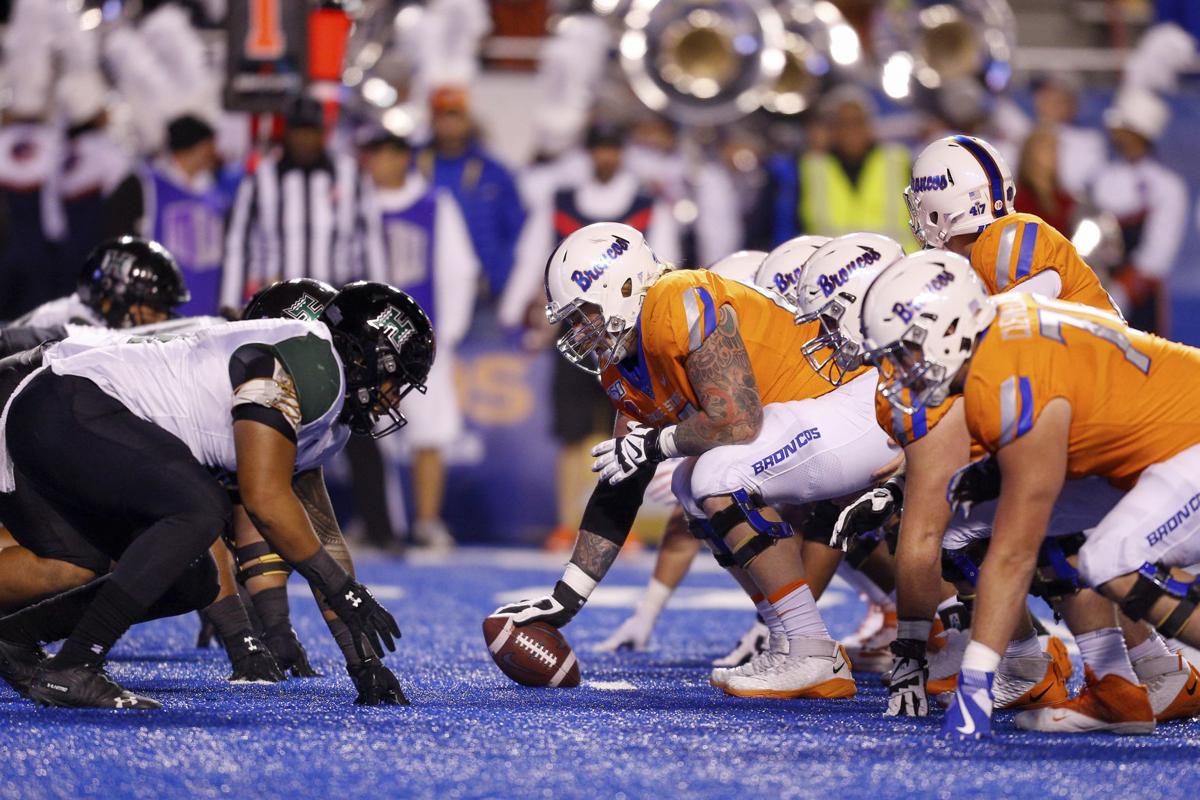 Boise State lines up against Hawaii in the first half of a game Oct. 12. 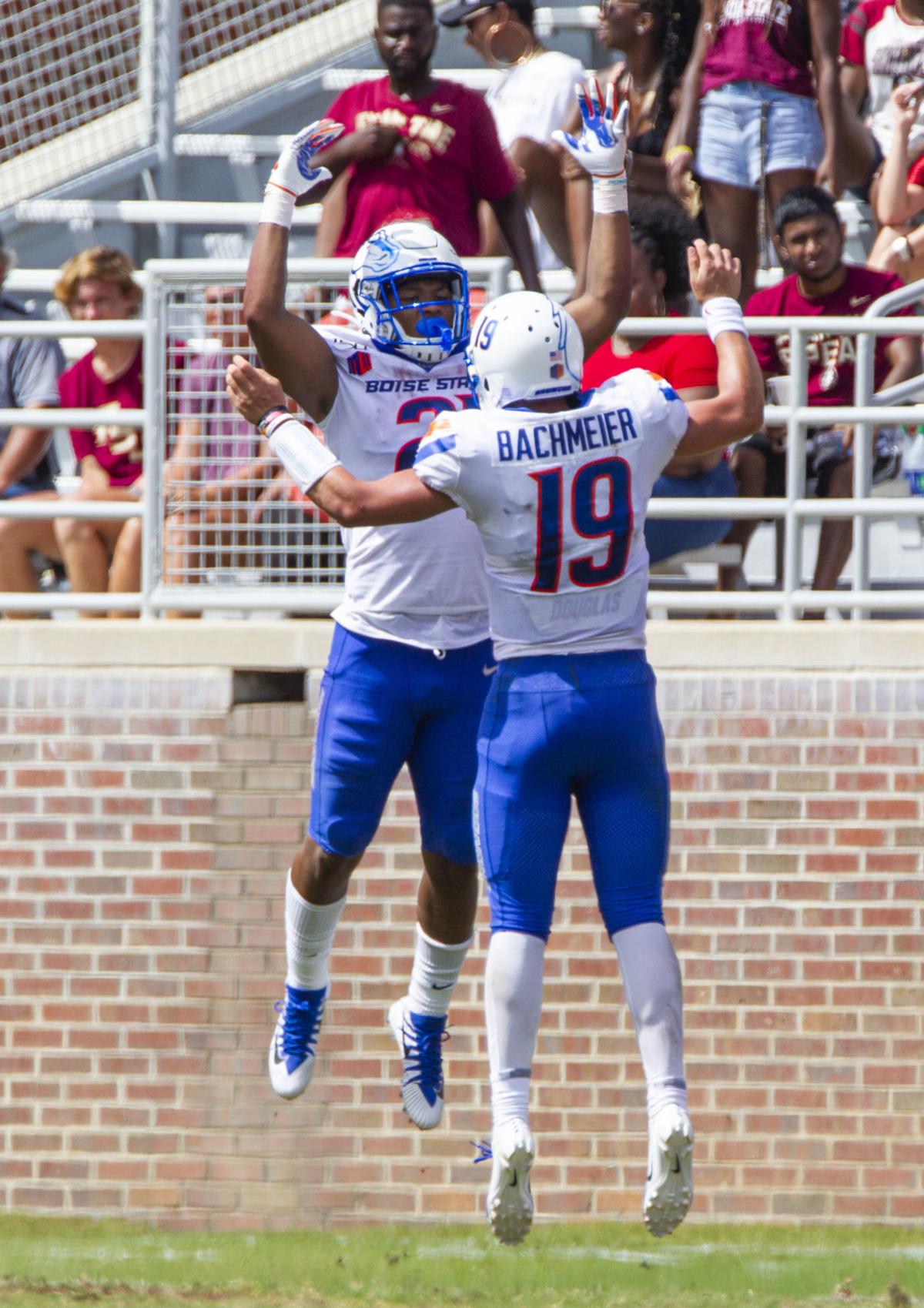 Boise State running back George Holani (24) and teammates celebrate his touchdown during the Las Vegas Bowl on Dec. 21.

Boise State lines up against Hawaii in the first half of a game Oct. 12.

BOISE — The sting from a blowout loss to Washington in the Las Vegas Bowl is starting to wear off and the Boise State football team will soon officially turn the page to start preparing for 2020.

The Broncos will start their winter conditioning program in mid-January and, believe it or not, spring practice is only about two months away.

A 12-2 season that featured a road win at Florida State and a Mountain West Conference title should ultimately be seen as a great year, but losing out to Memphis for the Cotton Bowl bid and the 38-7 loss to former coach Chris Petersen on national TV in the finale takes some of the shine away.

Boise State has since lost STUD Curtis Weaver and left tackle Ezra Cleveland to the NFL, in addition to a number of impact seniors including wide receiver John Hightower, safety Kekoa Nawahine, defensive lineman Chase Hatada and five other starters along the offensive and defensive lines.

But the Broncos bring back quarterback Hank Bachmeier, running back George Holani and wide receivers Khalil Shakir and CT Thomas on offense, and the top three tacklers from last season return on defense in linebackers Riley Whimpey and Benton Wickersham and nickel Kekaula Kaniho.

The 2020 schedule will be one of the tougher ones the Broncos have played in recent memory, which sets them up nicely for a run at the Group of 5 spot in a New Year’s Six bowl game. Boise State will face eight teams next season that played in bowl games in 2019.

The Broncos get a rematch with Florida State on The Blue in maybe the most anticipated sporting event in the city of Boise’s history on Sept. 19. They also host BYU and Utah State at Albertsons Stadium and travel to Marshall, Hawaii, Air Force and Wyoming.

Georgia Southern, the only team to beat Appalachian State this year, visits The Blue for the season opener on Sept. 5.

The coaching staff will also have a new look next season. Boise State is still searching for an offensive coordinator and quarterbacks coach after Zak Hill left for Arizona State in mid-December. It’s always possible other coaches could still leave as well.

Here’s a quick look at each position for the Broncos, and what the group looks like heading into next season:

QUARTERBACK: Why Bachmeier started the Las Vegas Bowl still remains a mystery. He struggled in his first game action in seven weeks, and Boise State scored just seven points as a result. Senior Jaylon Henderson played well down the stretch and led the Broncos on their only touchdown drive in the bowl game, but he graduates. Bachmeier and Chase Cord return as the only scholarship quarterbacks on the roster heading into the spring. Bachmeier went 7-0 in his first seven starts, but dealt with two separate injuries. He has a ton of talent and should be an asset for the Broncos next year — assuming he can stay healthy.

RUNNING BACK: Holani, a true freshman, extended Boise State’s streak to 11 straight seasons with a 1,000-yard rusher despite starting the season third on the depth chart. He finished with 1,014 yards and seven touchdowns on 192 attempts and looks to be the next star running back for the Broncos. Robert Mahone and Andrew Van Buren both had disappointing seasons, but both return next season to provide the Broncos with solid depth at the position. Running back should be an area of strength for the Broncos in 2020.

WIDE RECEIVER: Hightower will be a big loss for the Broncos after he led the team with 943 receiving yards and eight receiving touchdowns. His speed and big-play ability helped stretch the defense, and the Broncos don’t appear to have a similar player on the roster just yet. Solid contributor Akilian Butler also is gone, but the No. 2 and No. 3 receivers return in Shakir and Thomas.

Both could be two of the better wide receivers in the league next year. Shakir led the team with 63 catches and had 872 yards and six touchdowns, while Thomas had 41 catches for 522 yards and five touchdowns. Octavius Evans and Stefan Cobbs both also return for what should be a deep group again next year.

TIGHT END: Boise State returns its top pass-catching tight end in the 6-foot-6 John Bates, who had 22 catches for 273 yards and one touchdown. But they lose a pair of key contributors in Garrett Collingham and Matt Pistone. Collingham had 13 catches for 113 yards and three touchdowns, and also added a rushing touchdown. Pistone was a blocking tight end that was a key piece of the Broncos’ rushing attack. Both were quietly big parts of the offense that will be tough to replace. A pair of youngsters in Tyneil Hopper and Cole Ramseyer will have to step up and play bigger roles in 2020.

OFFENSIVE LINE: Offensive line coach Brad Bedell faces quite the challenge next season with the departure of four starters up front, including a pair of first team All-Mountain West picks in Cleveland and left guard John Molchon. Center Garrett Larson and right guard Eric Quevedo both also graduated, leaving only right tackle John Ojukwu as a returning starter. The group struggled early in the season but became a solid unit by the end of the season. One positive is that injuries allowed some younger players to get valuable playing time. Potential replacements in 2020 include Jake Stetz (two starts at left guard, two starts at right guard), Kekaniokoa Holomalia-Gonzalez (two starts at left guard), Garrett Curran (one start at right tackle) and Donte Harrington (missed 2019 season due to a torn ACL).

DEFENSIVE LINE: The Broncos say goodbye to all four starters along the defensive line, but the loss of Weaver is maybe the single biggest departure from the roster. His 34 career sacks were the most in Mountain West history and No. 2 in Boise State history. He was the only player in the country to have at least 9.5 sacks in each of the past three seasons. Demitri Washington played in 13 games as the backup STUD to Weaver and had 5.5 tackles-for-loss and 4.5 sacks. He’ll likely be the starter, with sixth-year senior Sam Whitney also contributing after missing 2019 due to injury. Hatada will also be tough to replace after he finished second on the team with 13 tackles-for-loss and six sacks at defensive end. Veterans David Moa and Sonatane Lui also depart, leaving the Broncos with big holes to fill in the middle. Scale Igiehon should emerge as an impact player next year on the inside, while Scott Matlock, Jabari Watson and Keegan Freeborn will likely have bigger roles. There’s no obvious replacement for Hatada at defensive end, which is somewhat concerning heading into the offseason.

LINEBACKER: This figures to be one of the strongest and deepest positions on the field for the Broncos next season with the return of starters Whimpey and Wickersham and both major backups in Bruno DeRose and Brandon Hawkins. Whimpey led the Broncos with 83 tackles and had seven tackles-for-loss, while Wickersham took over for the injured Ezekial Noa and finished third with 63 tackles. Boise State will get Noa back next season, which will be a big addition considering he was leading the team in tackles when he suffered a broken wrist and torn ACL in the fourth game against Air Force. The Broncos were fairly thin and inexperienced at linebacker the past two seasons, but should have a wealth of talent and depth in 2020.

SECONDARY: The lone loss in the secondary is safety Nawahine, who led the Broncos with three interceptions and two fumble recoveries and was second with 68 tackles. His veteran leadership and playmaking ability will be missed in the secondary next season. The Broncos get starter DeAndre Pierce back at safety after he went down with an injury midway through the season, and JL Skinner, Tyreque Jones, Jordan Happle and Evan Tyler should be more than enough talent to fill the other safety spot. Corners Avery Williams and Jalen Walker both return, and the Broncos have plenty of young talent behind them including Markel Reed, Tyric Lebeauf, Chris Mitchell and Marques Evans. Williams’ 36 career starts are the most on the team entering next season.

SPECIAL TEAMS: For the second straight season Boise State will be in need of a kicker, and they can only hope to find someone as reliable as Eric Sachse. The graduate transfer made 14 of 17 field goals in his only season with the Broncos. Specialist Gavin Wale was signed a year ago and given a scholarship, but he's mostly seen as a punter. After redshirting this season he'll compete with Joel Velazquez for punting duties next season. Velazquez punted 56 times for an average of 39.3 yards per punt. He'll be a redshirt senior. Velazquez also likely will compete at kicker next season with whoever the Broncos bring in. He served as the Broncos' kicker on long attempts and went 1 for 2 in 2019, making a 52-yarder at UNLV. Boise State likely will look to add at least one kicker to the mix prior to next season. Avery Williams was the Mountain West Special Teams Player of the Year and returns in 2020 after returning two punts for touchdowns. Kick returner John Hightower is gone.