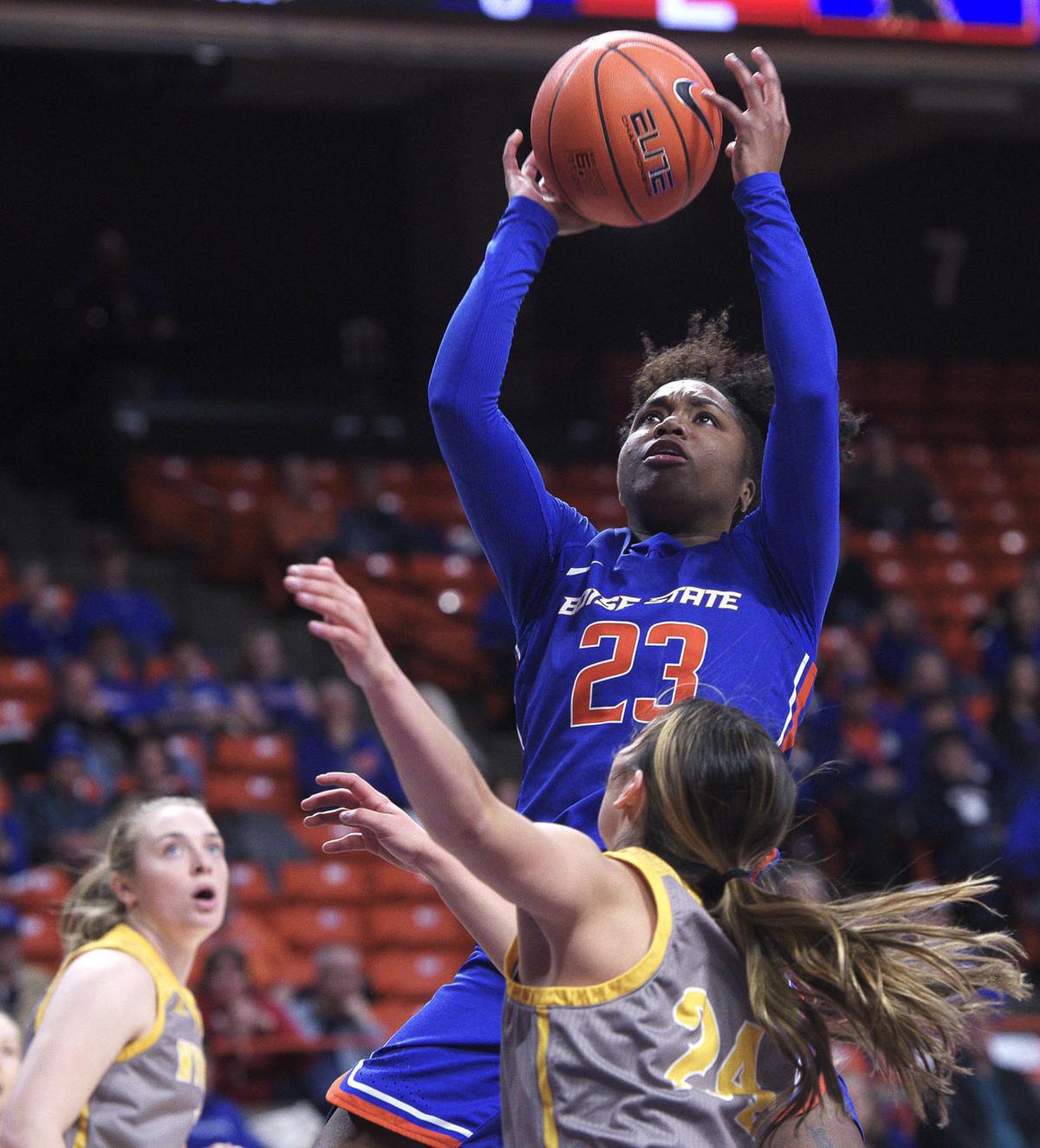 Boise State guard Jayde Christopher (23) shoots the ball during the game against Wyoming on Wednesday at ExtraMile Arena. 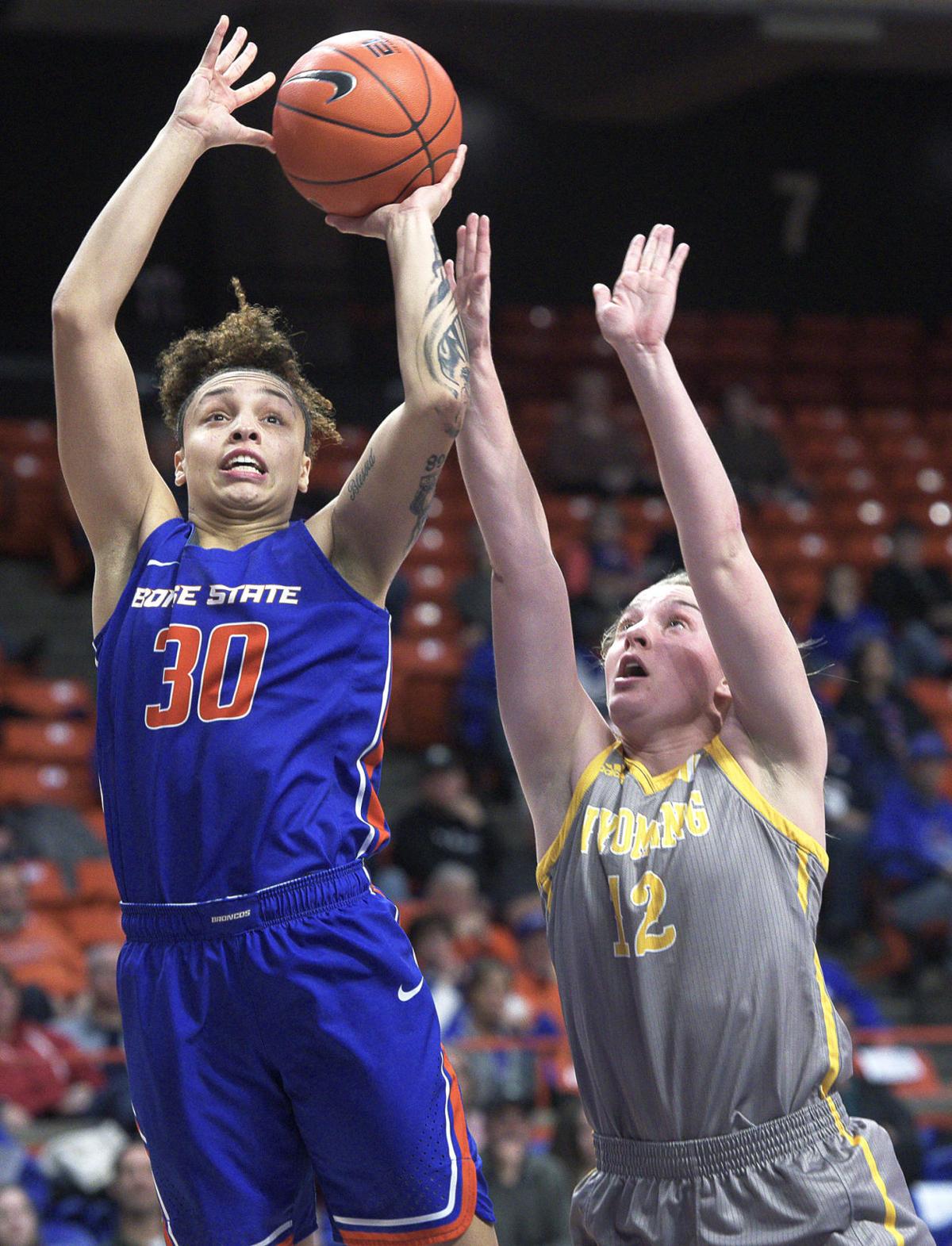 Boise State guard Jade Loville (30) shoots the ball during the game against Wyoming on Feb. 5 at ExtraMile Arena. 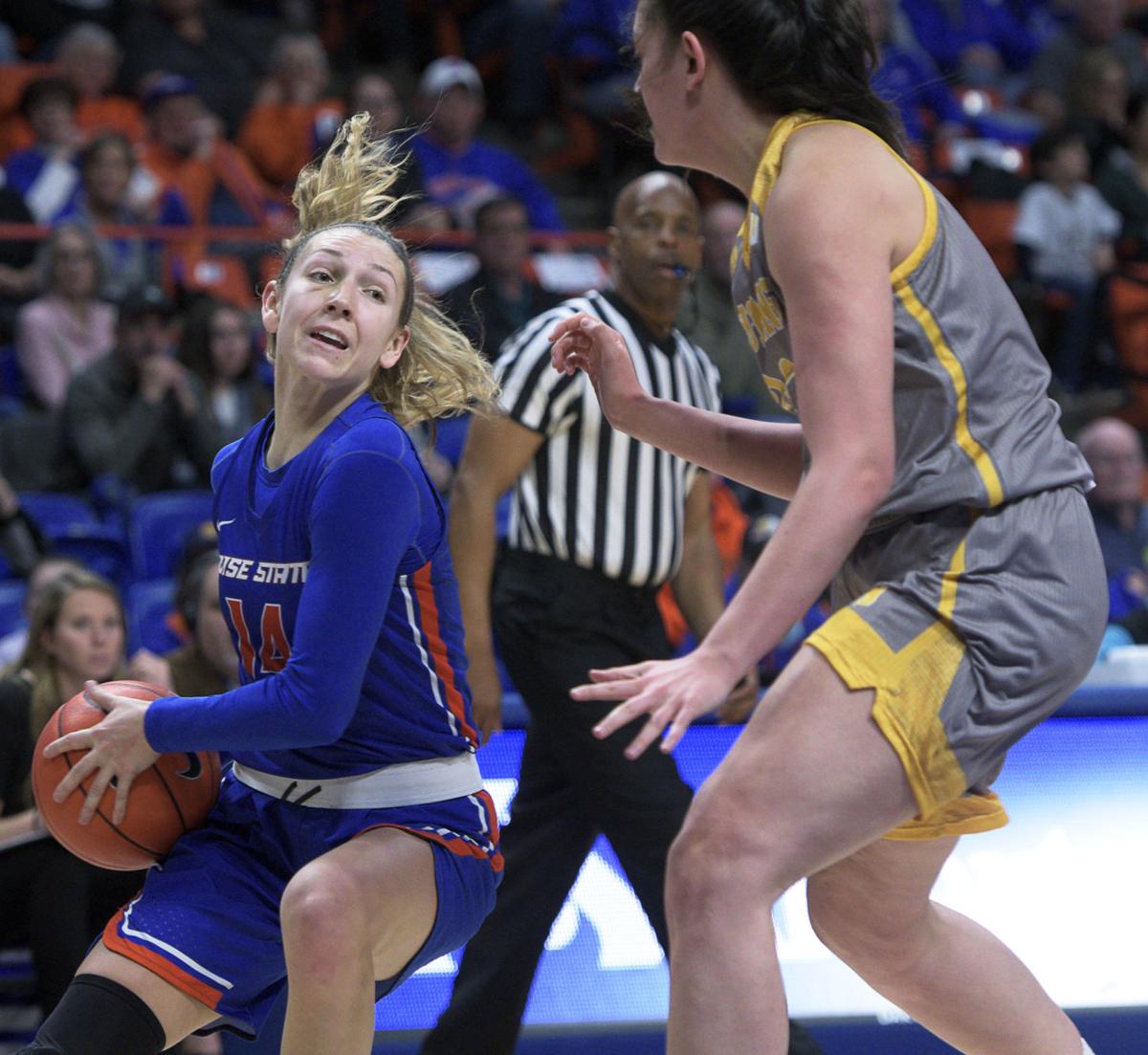 Boise State guard Braydey Hodgins (14) dribbles the ball in the corner during the game against Wyoming on Wednesday at ExtraMile Arena.

Boise State guard Jayde Christopher (23) shoots the ball during the game against Wyoming on Wednesday at ExtraMile Arena.

Boise State guard Jade Loville (30) shoots the ball during the game against Wyoming on Feb. 5 at ExtraMile Arena.

Boise State guard Braydey Hodgins (14) dribbles the ball in the corner during the game against Wyoming on Wednesday at ExtraMile Arena.

BOISE — The Boise State women’s basketball team avenged its first conference loss of the season with one of its strongest defensive outings of the year.

The Broncos held Wyoming to 17-of-42 shooting in the second half and forced 24 turnovers as Boise State took a wire-to-wire 67-48 win Wednesday at ExtraMile Arena.

“I guess it’s always our main goal to get the defensive stops,” said Jayde Christopher, who led the Broncos with a career-high six steals. “But this game was really one that we wanted to redeem ourselves.”

The win moves Boise State (16-8, 8-4 Mountain West) into fourth place in the conference standings and gives the Broncos back-to-back wins to begin February after ending January with losses to Fresno State and San Jose State. Boise State entered the game with an 0-4 record against the top five teams in the Mountain West, including a 73-68 loss to Wyoming on Jan. 1 in Laramie.

“It feels like everyone has their legs under them now,” said Riley Lupfer, who led the Broncos with 18 points. “I don’t want to say we were on a downhill slide, but we’re playing Bronco basketball again, and that feels good.”

“I think it was just limiting open shots,” said Lupfer. “We were helping off the right side, we were keeping them in front of us, so they couldn’t get those kick-out 3s. That’s what they killed us on the first time around, and I feel like this time it was ‘I’m going to keep my man in front of me.’”

Lupfer, who coach Gordy Presnell said had been battling an illness in recent weeks, had her highest scoring output since scoring 18 on Dec. 4 in the Broncos’ Mountain West opener.

She had 10 of those points during a third quarter which Boise State outscored Wyoming 18-7 to turn a 30-23 halftime lead to 48-30. All 10 of points came during a 14-3 run during the final seven and a half minutes of the quarter, in which Boise State didn’t allow Wyoming to hit a single field goal.

“It’s so hard to get her a shot,” Presnell said about Lupfer. “Our players are trying to call on her number and they just face guard her everywhere she goes. She hit a couple really tough shots. She was 7 for 9, so I was excited for her. She’s finally pretty healthy, so I was glad that she was ready.”

Boise State led from the start, with A’Shanti Coleman hitting a layup 30 seconds in, and the Broncos built their lead up to 21-9 on a buzzer-beating layup by Braydey Hodgins at the end of the first quarter.

But Boise State, which has blown double-digit leads in three of its four Mountain West losses, saw Wyoming open the second quarter on a 10-0 run to cut the lead down to two points.

Jade Loville ended Wyoming’s run with five straight points of her own and Boise State took a 30-23 lead into halftime. Wyoming never got any closer than seven points in the second half.

“We’ve been pretty good this year at getting a lead and then giving it up,” said Presnell. “I was just really pumped with that third quarter, to come out playing pretty fired up.”

In that third quarter, Wyoming hit 2 of 10 from the field, part of a stretch between the second and fourth quarters where Wyoming was 2 of 16.

“It was a total team effort and they got after it defensively,” said Presnell. “They got after it and turned the ball over 24 times. We don’t turn people over very much. I thought Jade Christopher was everywhere in the backside. It was just a really good great effort.”

Loville finished the game with 10 points, while Coleman scored nine.

Boise State will be back at ExtraMile Arena on Saturday for a game against Utah State.