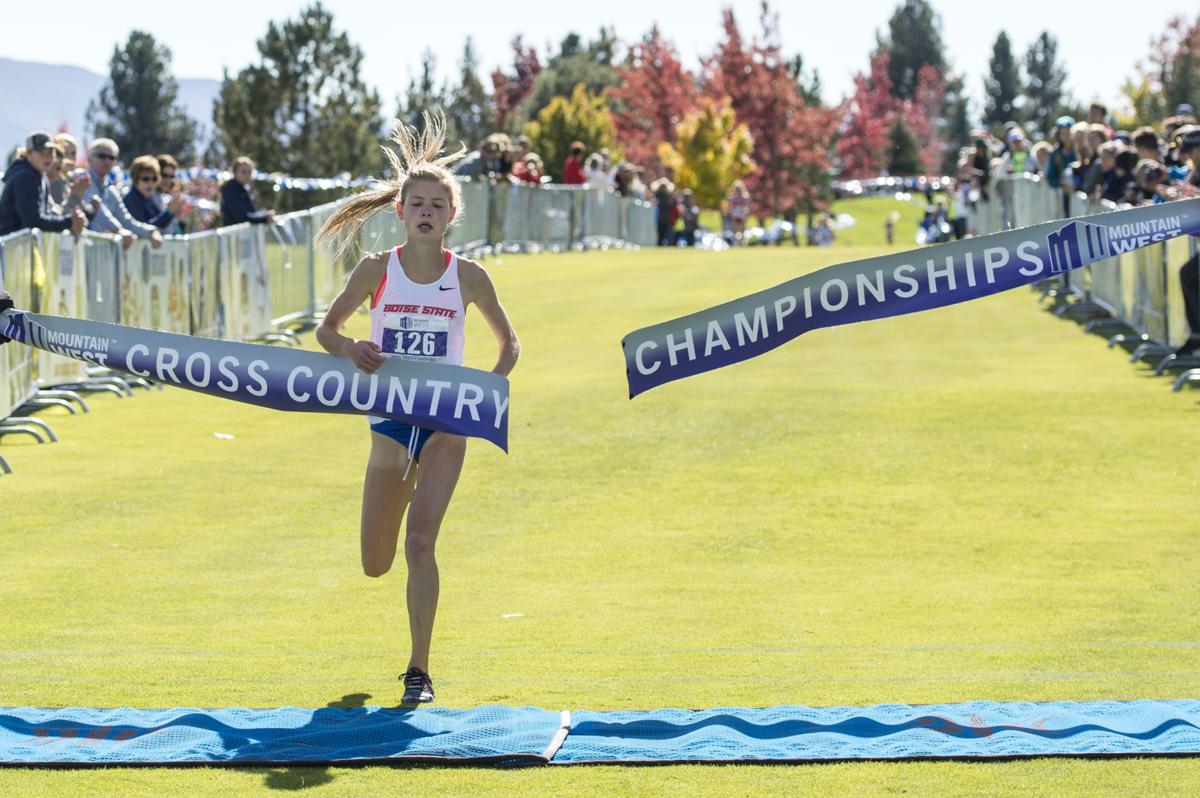 Ostrander crosses the finish line in first place at the 2015 Mountain West Women’s Cross Country Championships on Oct. 30, 2015 at Montreux Golf Club in Reno, Nev. Ostrander went on to have a runner-up finish at the NCAA Championships before missing last season entirely with an injury. 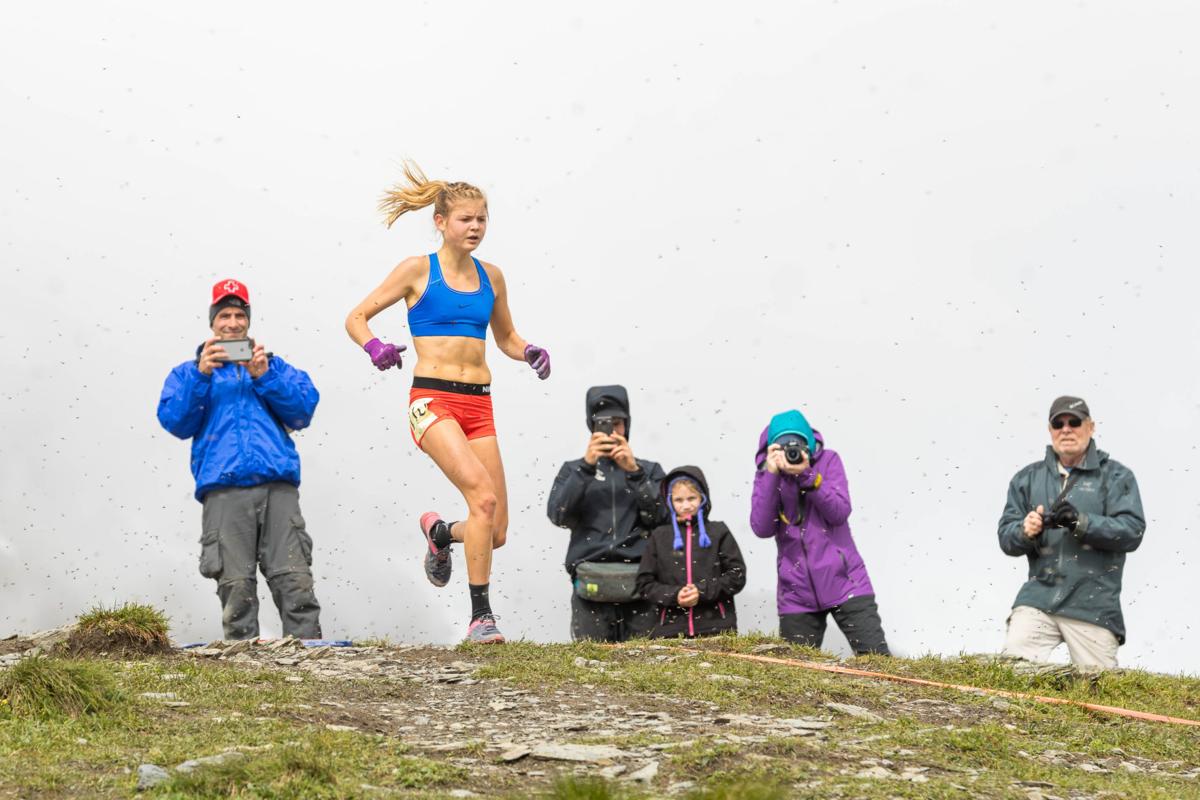 Allie Ostrander runs past a crowd of spectators during the Mount Marathon race on July 4 in Seward, Alaska. 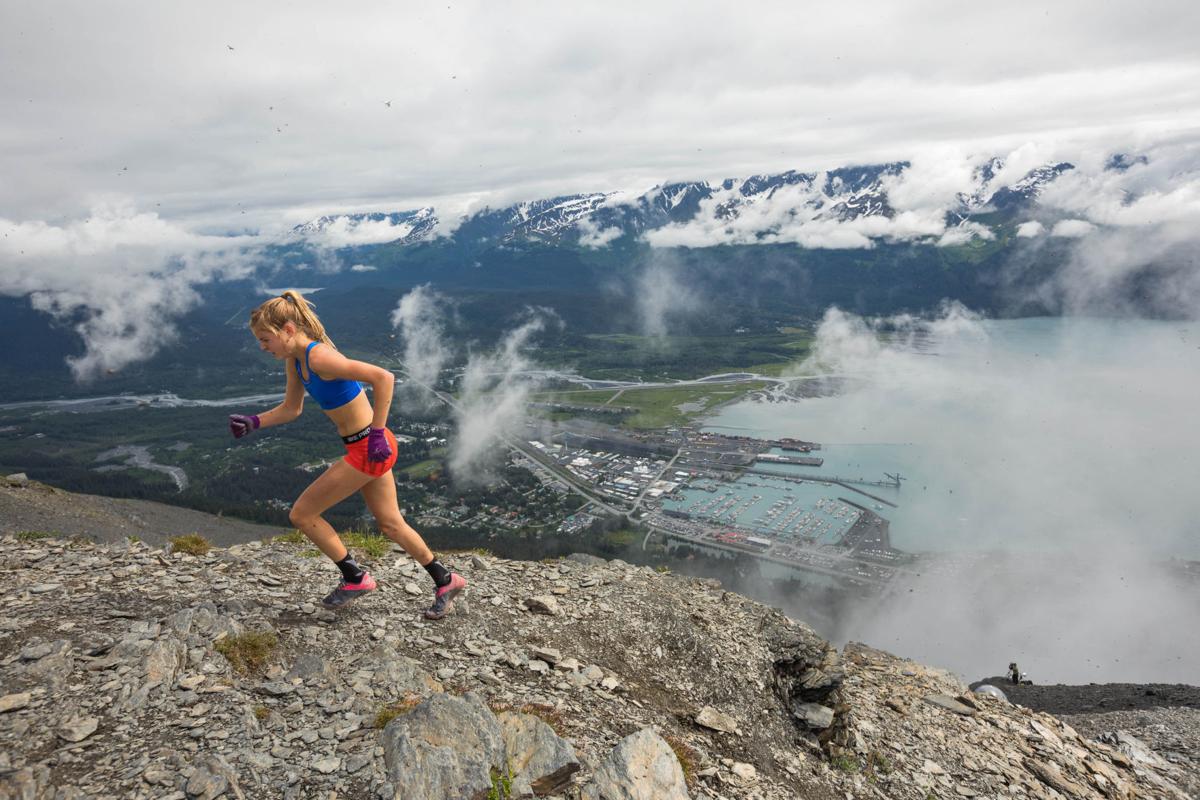 Allie Ostrander runs up the mountain during the 2017 Mount Marathon race on July 4, 2017 in Seward, Alaska. Ostrander won the race with the second fastest women's time in history. 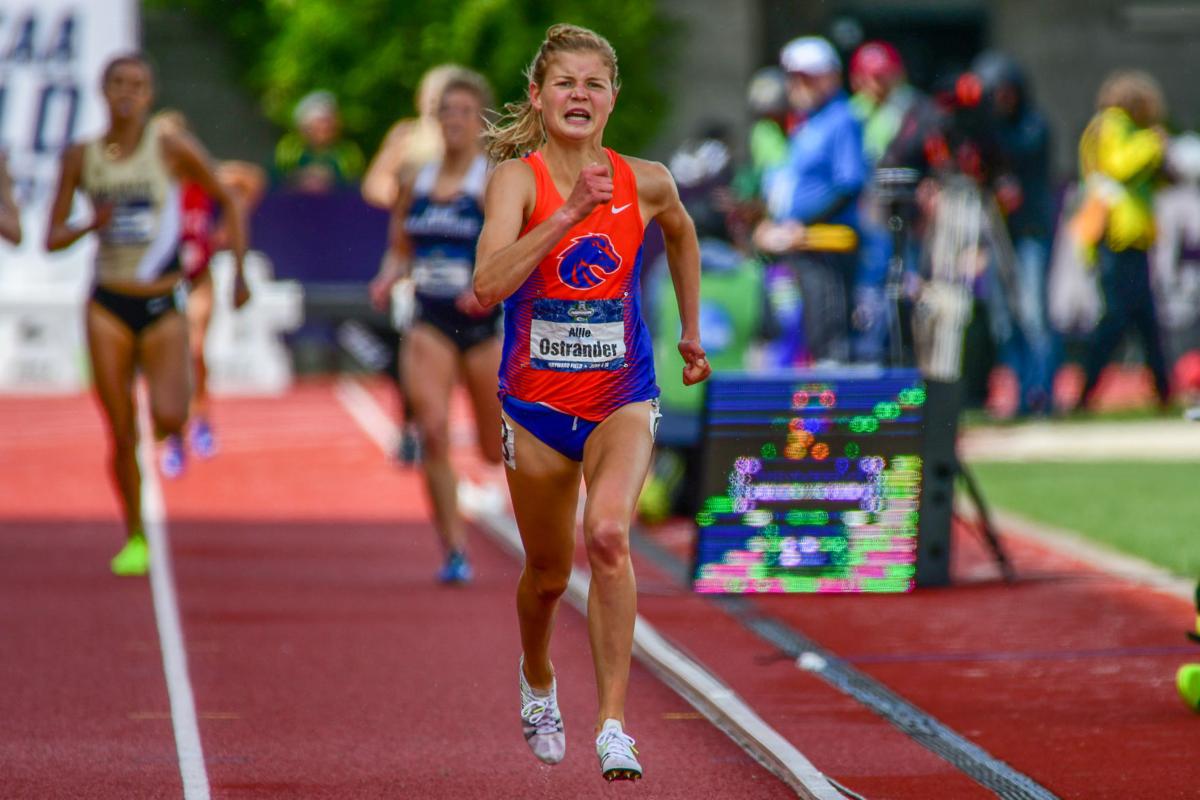 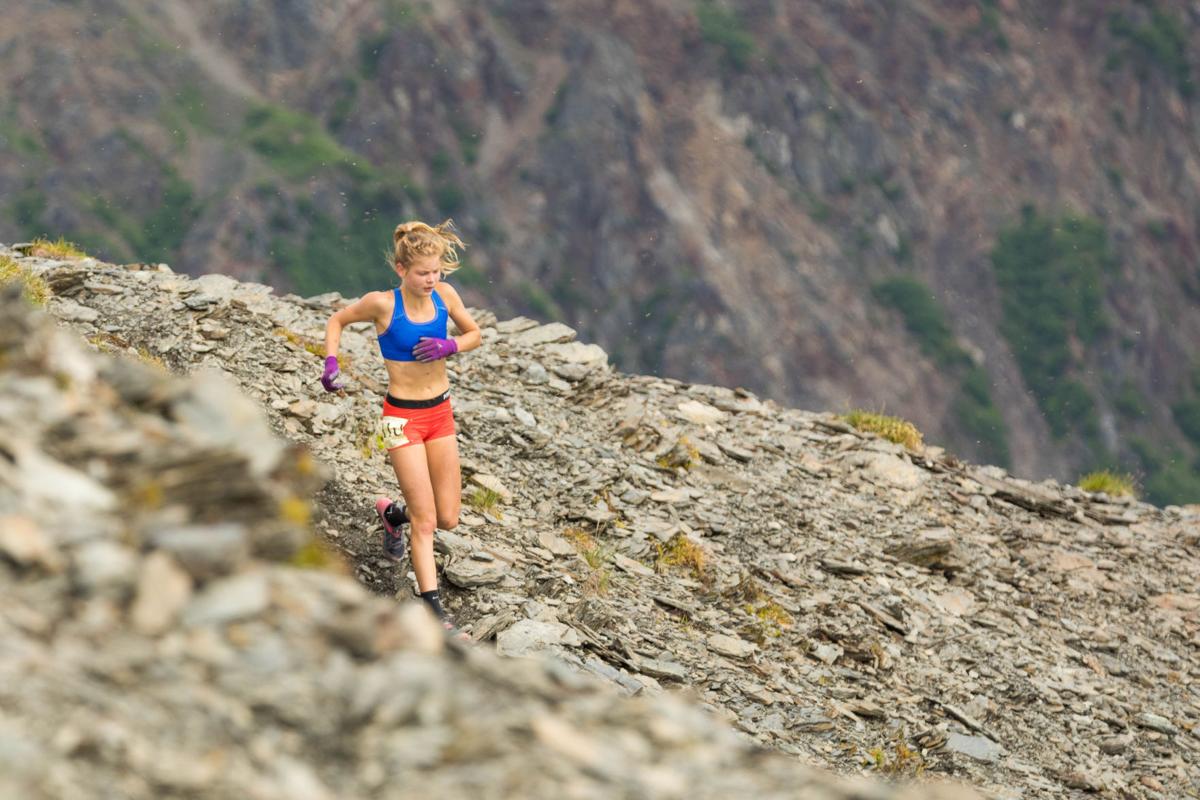 Allie Ostrander sprints down the mountain during the Mount Marathon race on July 4 in Seward, Alaska.

Ostrander crosses the finish line in first place at the 2015 Mountain West Women’s Cross Country Championships on Oct. 30, 2015 at Montreux Golf Club in Reno, Nev. Ostrander went on to have a runner-up finish at the NCAA Championships before missing last season entirely with an injury.

Allie Ostrander runs past a crowd of spectators during the Mount Marathon race on July 4 in Seward, Alaska.

Allie Ostrander runs up the mountain during the 2017 Mount Marathon race on July 4, 2017 in Seward, Alaska. Ostrander won the race with the second fastest women's time in history.

Allie Ostrander sprints down the mountain during the Mount Marathon race on July 4 in Seward, Alaska.

That’s how long it will have been since Allie Ostrander’s last cross country race by the time she steps to the starting line at the Greater Louisville Classic in Louisville, Kentucky on Saturday.

While the Boise State junior runner has already accomplished a lot in her career thus far — a national title, an All-American honor and multiple Mountain West championships just to name a few — she is far from satisfied after missing last year’s entire cross country season.

After 679 days, Ostrander is eager to make her long-awaited return.

“Oh I’m feeling great. I’ve had a good summer of training and I’m ready to go,” Ostrander said. “I’ve been on the track but it’s just not the same as being on those trails and courses. I’ve really missed that.”

Ostrander was fresh off of arguably the most impressive freshman season in program history. She was the Mountain West Women’s Cross Country Athlete of the Week three times, the first runner in conference history to achieve that feat.

She then claimed the women’s individual title at the Mountain West Championships to become just the second freshman in the league’s history to do so before finishing runner-up at the NCAA Division I Championships.

But before Ostrander could come back for an encore in her sophomore year, it happened. While training the summer before her sophomore campaign, Ostrander started to feel pain she had never felt before.

She tried to shake it off but the pain only grew worse in the passing days and it quickly got to the point where Ostrander simply couldn’t run anymore.

Following a scan, it was determined that Ostrander had suffered a sacral stress fracture. According to the National Institute of Health, a sacral stress fracture “involves tiny cracks in the sacral bone or better known as the triangular bone at the base of the spine caused by the repetitive movements, often by overuse, such as long distance running.”

Ostrander was forced to sit out for three months as a result, marking the end of her season before it even began. With Ostrander on the shelf, the Boise State women’s cross country team missed the NCAA Division I Championships for the first time in two seasons.

“It was a mentally and emotionally draining time for me,” Ostrander said. “It was extremely upsetting to not be able to run, especially having trained all throughout the summer.

“But it was all valuable experience. It helped me gain a lot of perspective about myself and really made my appreciation for running grow.”

Ostrander has since returned to running and it appears like she hasn’t lost a step. She began by winning a national title in the steeplechase at the NCAA Division I Outdoor National Championships in June at Hayward Field in Eugene, Oregon.

She then followed that up with a win at the Mount Marathon race in her home state of Alaska a month later. The race is a 3.1 mile run with a 3,000-foot climb and descent of Mount Marathon in Seward, Alaska, which is about two hours from Ostrander’s hometown of Kenai. It’s a Fourth of July tradition in the area and one of the most popular races in Alaska.

The 20-year old finished the up-and-down race with a time of 49:19, the second-fastest women’s time in the event’s 102-year history. It was the 10th time Ostrander had partaken in the race. She previously finished second in 2015 and was a six-time junior winner before that.

“I enjoyed doing it and I was glad I was finally able to win. Well enjoy is kind of a stretch,” quipped Ostrander. “It’s fairly dangerous and a really technical course with steep inclines and deep declines. It’s a really, really tough race mentally and very physically challenging in a lot of different ways.

“But it’s a good experience that really helps build mental toughness and was great training for this coming season.”

Now back in the full swing of things, Ostrander turns her attention to Saturday’s season opener. The race is actually the second on the schedule but will serve as the Boise State women’s cross country team’s first race of the season after the Oregon XC Preview on Sept. 7 was canceled due to poor air quality.

The team will certainly be glad to have Ostrander back.

“She is a huge talent and is going to help us out tremendously this season,” senior graduate transfer Megan Lacy said. “She loves to compete in anything she does and it really shows out there when she does.”

The Broncos enter the season ranked No. 14 in the country. They were No. 19 in the U.S. Track & Field and Cross Country Coaches Association preseason rankings and picked second in the Mountain West preseason poll behind nine-time defending league champion, New Mexico.

Boise State will be looking to qualify for the NCAA Division I National Championships for the second time in three years. The Broncos placed 11th in both 2014 and 2015.

Joining Ostrander this season will be a bevy of talented runners. Junior Brenna Peloquin earned All-American honors last season with a sixth-place finish at the NCAA Division I Championships. She was ranked ninth by FloTrack in its preseason countdown. 2016 Mountain West Women’s Freshman of the Year, Clare O’Brien also returns along with Minttu Hukka, Anna McDonald, Alexis Fuller and Gracie Tostenson as well as many others.

Ostrander herself was ranked second by FloTrack behind the defending champion, Missouri senior Karissa Schweizer. But Boise State cross country coach Corey Ihmels thinks Ostrander can be No. 1 by season’s end.

“The one thing about Allie is if you can get her to the line healthy and feeling pretty good, she’s pretty hard to beat,” Ihmels said. “At the end of the day when the gun goes off, I get to sit back and watch. It’s quite the show and I wouldn’t bet against her.”

For Ostrander, she’s just happy to be back out there again.

“After everything I’ve endured, just making it through this season injury-free is goal No. 1,” Ostrander said with a laugh.