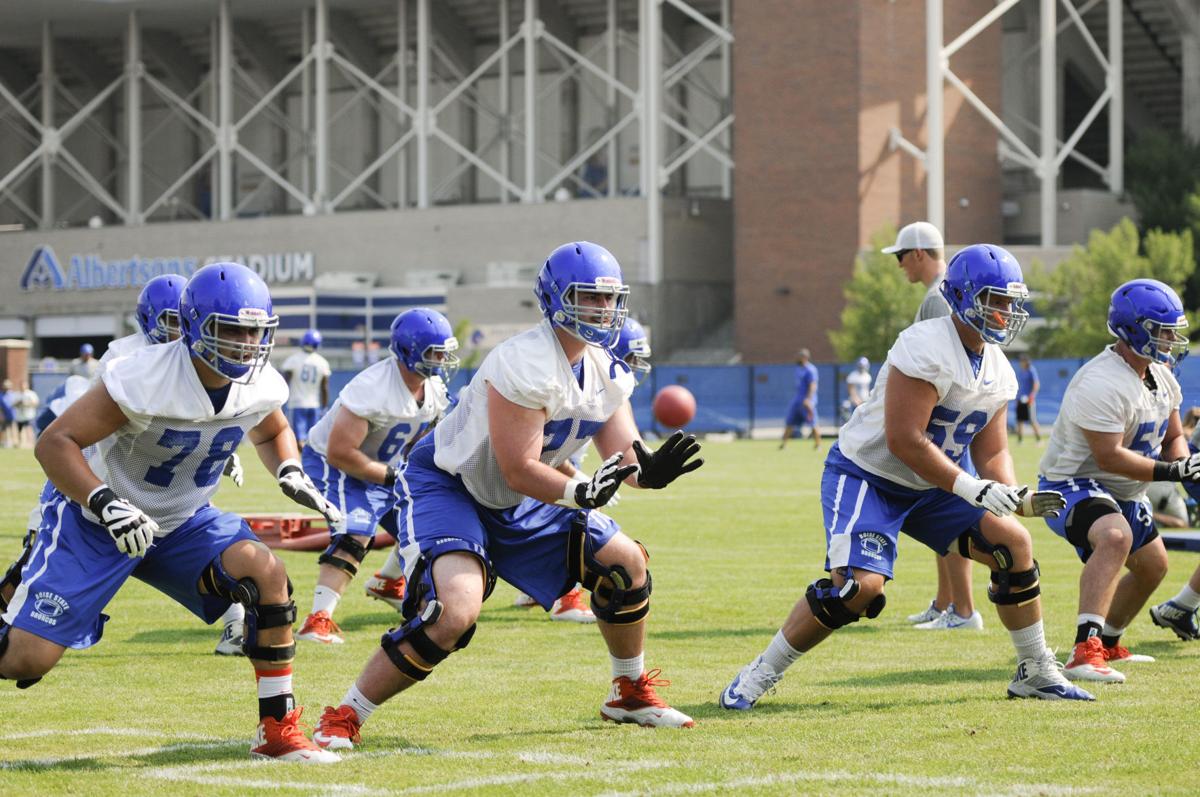 The Boise State offensive line works on drills during practice on Aug. 1, 2017. 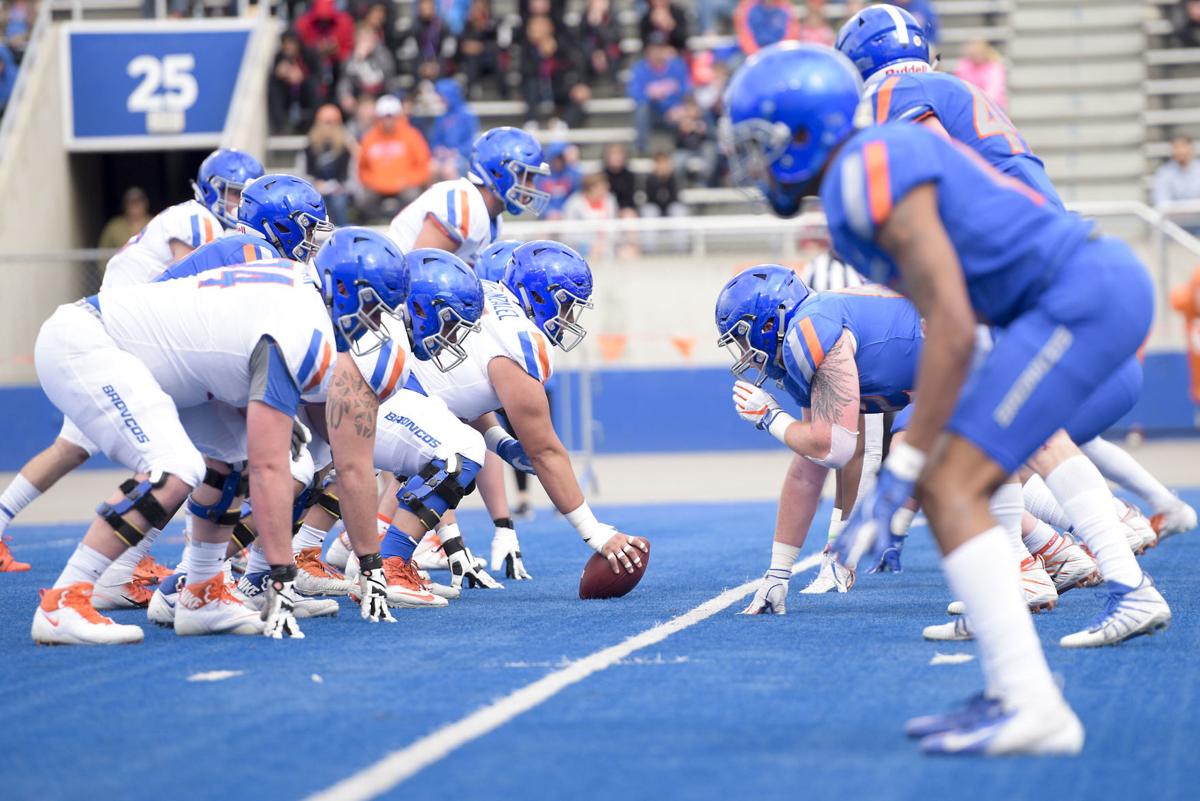 Members of the offense and defense line up for the snap during the 2019 Spring Game at Albertsons Stadium. 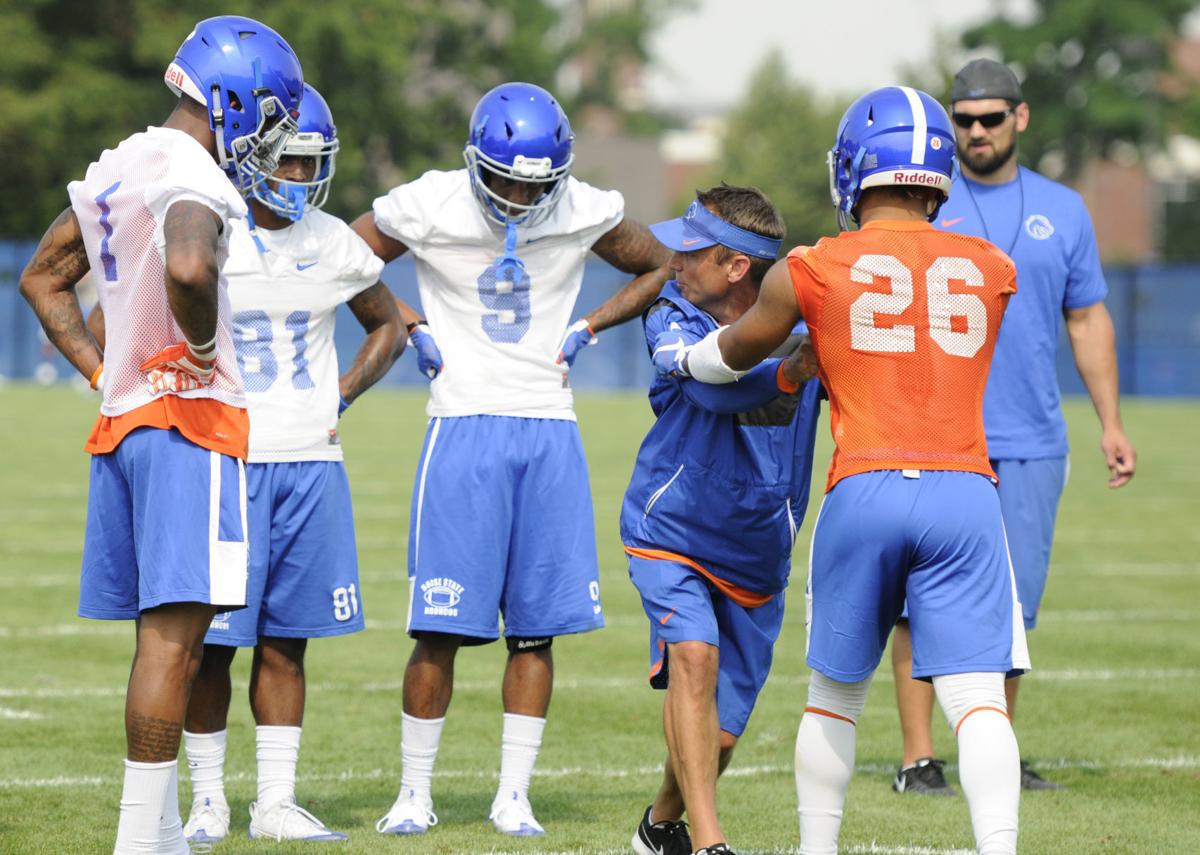 The Boise State offensive line works on drills during practice on Aug. 1, 2017.

Members of the offense and defense line up for the snap during the 2019 Spring Game at Albertsons Stadium.

BOISE — Imagine a Boise State football practice this fall in which the quarterbacks are not allowed to be near each other. Same for the running backs or wide receivers or any other position group.

It sounds crazy, but it may have to be the new normal if teams hope to avoid COVID-19 outbreaks and the potential of having to cancel games during the season.

Everyone agrees there’s no way to maintain proper social distancing in a contact sport like football, but all possible precautions and scenarios figure to be examined and explored the next six weeks before practices start in August.

Football, as we know it, likely won’t be the same anytime soon.

“Right now it’s about making sure they are safe in the weight room and trying to go outside and condition,” Boise State associate athletic director for sports performance health and wellness Marc Paul said earlier this week during a Zoom interview with reporters. “When we get to practices, I don’t know what that’s going to look like if I’m honest with you. Nobody really does.

“This comes down to health and safety and making sure these kids are safe, and our staff. We’re trying to figure this out for everyone’s sake.”

Boise State announced Friday afternoon that campus will remain closed until July 6 after more than 28 positive COVID-19 tests on campus in the past week. There were eight announced Monday, and 20 more confirmed on Friday. This is campus-wide, but voluntary workouts for student-athletes are impacted as a result.

When football players return and are able to get into workouts, practices and meetings, things won’t be as they’ve been in the past. Position meetings likely will have to be altered so an entire group like the offensive line is not squeezed together into a small room.

If one offensive lineman comes down with COVID-19, the Broncos would be OK. But if half the group tests positive a few days before the game? It could mean having to potentially cancel the game.

Same goes for team travel to away games. The school plans to rent additional buses if needed to maintain social distancing for all sports, and traveling parties will be limited to essential team and game personnel only.

But what about during a practice or game itself and some of the simplest required items such as a football?

“We’re coming up with protocols as we speak for all the equipment,” Paul said. “The footballs. How often do those need to be disinfected? What are we doing with water? Everybody used to just take a drink and pass it to the next guy, but those days have to be gone.”

Paul said they are exploring the use of face shields that cover the entire face mask of a football helmet including the nose and mouth as an extra precaution.

“Nobody has worn them yet and depending on the weather are those going to fog up and obscure vision and cause other issues?” Paul said. “They might not, but nobody knows yet because we haven’t gotten to that point (of testing them).”

Paul said all sports will be impacted and discussions are currently going on to try and make precautions for each specific sport.

“We have some ideas and theories but at some point you have to play the game, you have to practice the game,” Paul said. “Whether it’s football or if you have swimmers lined up on the blocks, or track and field runners bunched up together on the course. Each sport presents unique challenges, and what those final products look like remain to be seen.”

Paul wouldn’t say whether he expected football and other sports to happen this fall.

“That’s a great question and one everybody is asking, but those decisions are made by people a heck of a lot higher up than me,” Paul said.

Boise State announced Wednesday that of the 230-250 total COVID-19 tests administered to student-athletes, coaches and staff since they began returning to campus on June 1, there have been four positive cases. Three of the four were detected before the individual returned to campus.

Workouts were stopped and campus was shut down Monday due to the outbreak on campus, although it’s unclear how many positive cases were from within the athletics department. Paul said everyone in the athletic department will be retested before resuming voluntary workouts on July 6.

“Our players have been remarkable and our coaches and staff,” Paul said. “They are all good with it. We’re trying to stay proactive and communicate a lot. … It’s hard sometimes to hear that we have to slow down or stop, but everybody understands.”

Outbreaks at other schools including LSU were results of players visiting bars and nightclubs. Paul said all they can do is inform players of the risks and the consequences by going certain places or gathering in large groups, but that the onus is on the student-athlete to do the right thing to take precautions when they are not on campus.

“The whole thing comes down to education,” Paul said. “It’s a lot of reminders that if you do something socially, wear a mask, stay six feet apart. We are constantly harping on these things. When they go out and whatever they do, we can’t babysit them. They are college kids and they are learning how to figure out life, so we’re not going to put spies around and do that stuff.

“We’re constantly hammering the education piece, and when they come back to the facilities we do our daily screening assessment to ask questions about symptoms and where they’ve been. It’s a lot of tracking and monitoring and continuing to reinforce what the standards are.”

Paul said the hardest part of trying to plan is not knowing what will happen. The hope is that the virus subsides enough to allow for college athletics to start on time and go uninterrupted, but the football opener against Georgia Southern on Sept. 5 still feels like lightyears away.

A lot can change between now and then. And Boise State is doing all it can to be ready.

“I was on a call recently and somebody said I feel like I’m building the airplane as I fly it,” Paul said. “And that’s actually pretty accurate. A lot of times we don’t even know we’re going to have an issue until the issue pops up. We don’t have all the answers, but we have a lot of ideas.”