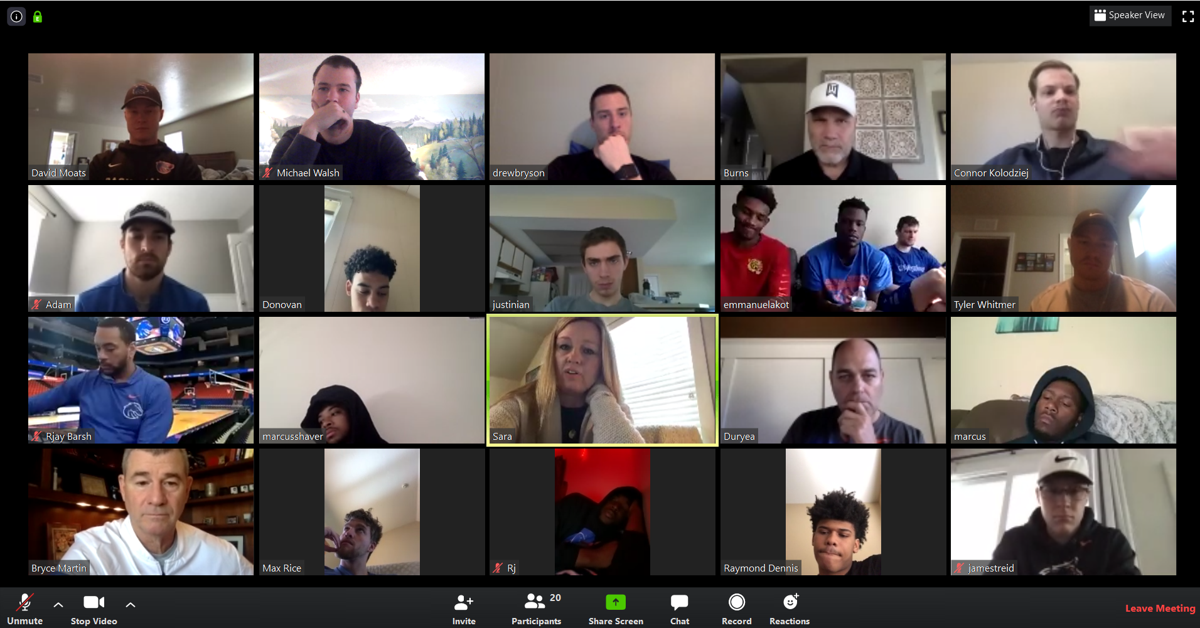 Members of the Boise State men’s basketball team participate in a virtual team meeting on Zoom in March. Head coach Leon Rice (Bottom left) is holding weekly meetings with his players and staff on Zoom during the ongoing COVID-19 pandemic. 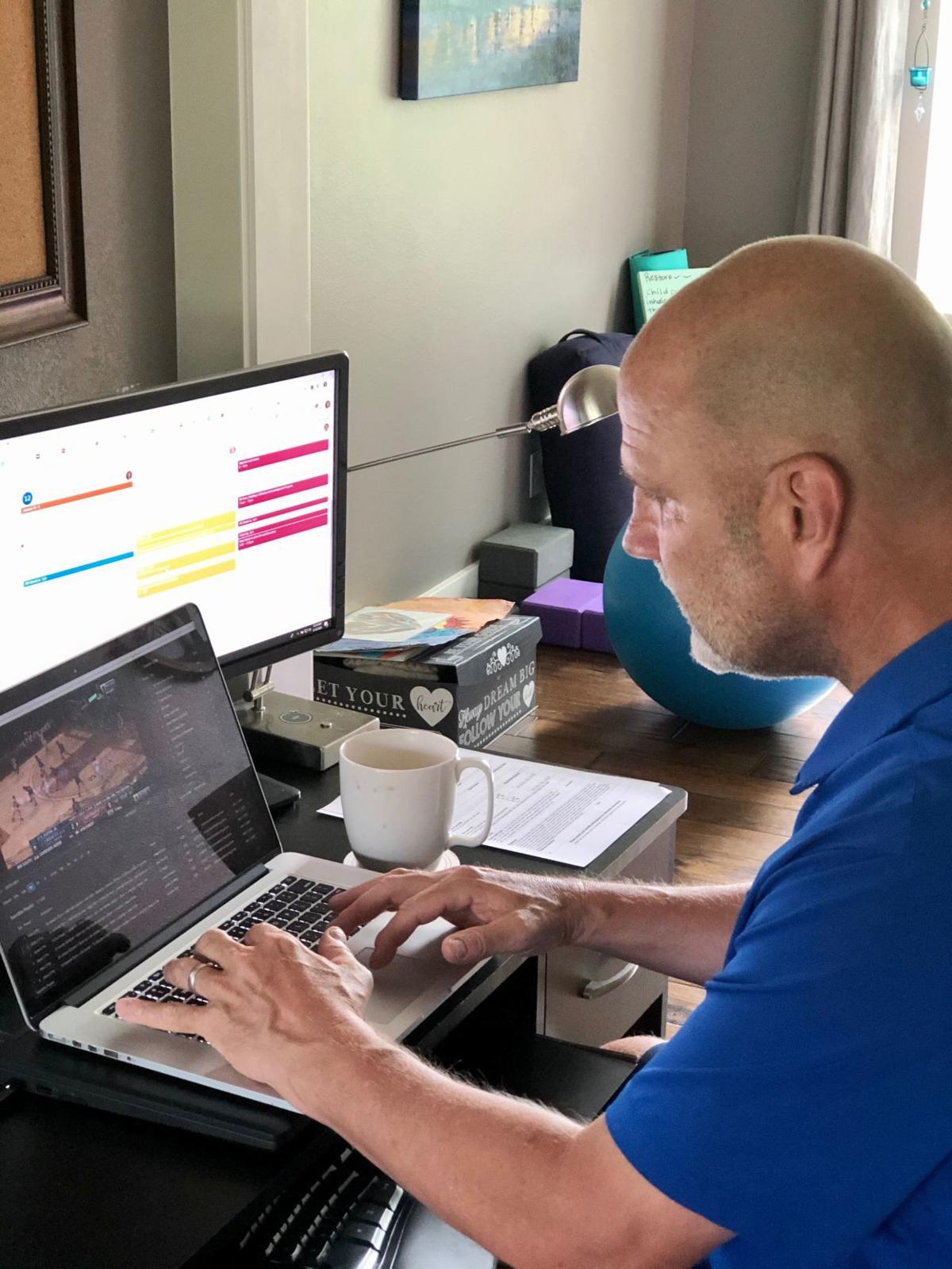 Boise State assistant men’s basketball coach Mike Burns works from his home office on Monday morning. Coaches are working from home due to the COVID-19 pandemic.

Members of the Boise State men’s basketball team participate in a virtual team meeting on Zoom in March. Head coach Leon Rice (Bottom left) is holding weekly meetings with his players and staff on Zoom during the ongoing COVID-19 pandemic.

Boise State assistant men’s basketball coach Mike Burns works from his home office on Monday morning. Coaches are working from home due to the COVID-19 pandemic.

BOISE — The sight of a shirtless Tim Duryea on his computer screen wasn’t one Leon Rice expected to see this summer.

But that’s where the Boise State men’s basketball team and others are at these days due to the ongoing COVID-19 pandemic that has shut down college athletics.

Boise State has been forced to hold weekly video chats on Zoom because coaches are working from home and most players returned home to be with their families. And Duryea, the third-year assistant coach, took home the prize for best background on a recent Zoom call when he showed up shirtless while appearing to be on a boat.

“I had never been on a Zoom call or even heard of a Zoom call before all of this,” Duryea joked. “I wish I would have bought Zoom stock.”

Like many others Boise State’s basketball program has had to adjust during this time. Instead of individual workouts in the gym and team meetings in the locker room, the Broncos have had to do things virtually. They meet as a team once a week on Zoom, and have smaller, individual sessions more frequently.

Players have been instructed to try and do workouts at home, but finding an available gym or basket to actually play basketball is nearly impossible right now. Even local outdoor parks in cities like Boise have been closed due to social distancing guidelines.

“They’ve done a great job doing stuff on their own,” Rice said. “We’ve got driven guys that take responsibility and ownership of their own development, and they are finding ways to get better. You just have to be creative.”

But that doesn’t mean it’s been easy, or fun. And as the pandemic rolls on and the uncertainty of when the Broncos might be able to get back together in a gym continues, they are fighting against frustration to stay motivated.

“I think it’s been really hard on them to be honest with you,” Duryea said. “We get on Zoom calls and I try to look at everyone and see who is struggling more than others based on where they are at and what they have available to them .... I think they are about at the end of their rope to be honest. They want to get back out there and be able to get in a gym and do what they’ve done their whole lives.”

Three players, Canadians Abu Kigab and Emmanual Akot, as well as Serbian Mladen Armus, were unable to return home to be with family. The three of them are currently living together in an apartment near campus while they await the OK to get back in the gym.

“We really worry about our international kids because they are here without their families and can’t go home,” Duryea said. “I feel for those guys and we’re trying to keep a close eye on them, but I think it’s hard.”

Business must continue, though, for the Broncos, particularly for the coaches. Boise State still has two scholarships available to use in recruiting, and the Broncos are trying to finalize a schedule for next season.

And all that work is being done from home. Assistant coach Mike Burns has a makeshift office set up in part of his kitchen, where his main task has been trying to finish the schedule.

“It’s a little bit like Groundhogs Day because every day is the same and one kind of runs into the other,” Burns said. “We can do most everything we need on the phone or email or Zoom, but it’s been a weird time because we are so used to being around our guys and being at school and in the office and the gym. Not having that ability right now is definitely unique.”

Burns said scheduling games has become tougher due to budget concerns faced by schools across the country. Boise State is looking to play an extra ‘buy game’ against a Power 5 team to help save the athletic department some money, but other schools are in the same boat. Some teams don’t have as much money to use in scheduling, while others are trying to limit travel.

“Everybody is having the same issues,” Burns said. “I talk to a lot of schools throughout the course of a week in regards to scheduling and everybody from the Power 5 schools down to the lowest of the low majors are feeling the financial crunch. It will be interesting to see how it plays out through the fall and what happens with football and those kinds of things, but it’s definitely a time of uncertainty.”

Burns said a ‘pandemic clause’ has been added to scheduling contracts to account for things such as playing a game with no fans or having to change the date or cancel the game should the college basketball season be impacted by the coronavirus.

“Nobody knows with certainty what the future holds,” Burns said. “We’ve done that to protect ourselves if something doesn’t go as planned.”

Recruiting also has been a big challenge. Boise State has been unable to bring prospects to campus for visits, and coaches have been unable to travel to see players. The Broncos put together a ‘virtual visit’ in which a video shows the town, the campus and the basketball facilities to recruits.

“We’re all on level playing fields,” Duryea said. “But here at Boise State we have so much to sell when they get on the ground that we’d like to have them here way more than a virtual tour, but virtual is better than nothing.”

The Broncos are still in search of a potential graduate transfer post player that could play immediately this season.

“I think all options are available depending on the position, but the bigger the player right now the more immediate the need where we’d be looking at a grad transfer,” Duryea said. “We would look at one more immediate-need type guy on the front line.”

Boise State champions itself as a development program that sees big progress and improvement in the offseason. They’ve already missed two months of offseason training, and not being able to start the summer program in June would be another blow.

The Broncos have four players that redshirted last season following transfers from other Division I schools, and getting the group to mesh in the spring and summer would have been a plus.

“It’s hard because we have some kids that really need the benefit of a good summer program,” Duryea said. “Knowing it’s going to be a while before we can get someone here, if at all, that’s kind of been weighing on the staff a little bit because we have a lot of new bodies and faces and these kids need a summer of individual workouts very badly. It’s going to hurt us if we can’t have a summer program.”

One potential positive for the Broncos? Rice said Derrick Alston Jr. has been participating in team meetings and activities while he contemplates a jump to the NBA. Alston declared for the NBA Draft, but has until June 3 to decide whether to keep his name in the draft or return to Boise State for his senior season.

“Derrick has been great throughout,” Rice said. “He’s already asserted himself as a leader for next year, which is great, regardless of which direction he goes. That’s the right way to do it.”