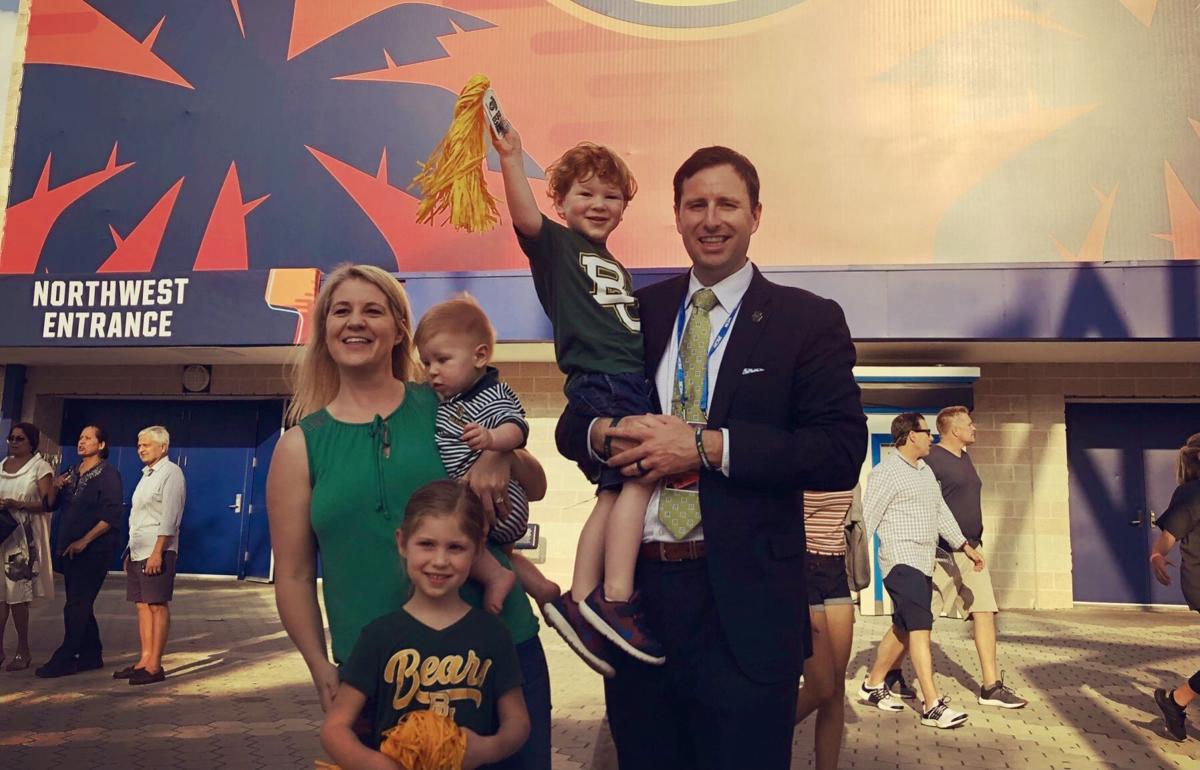 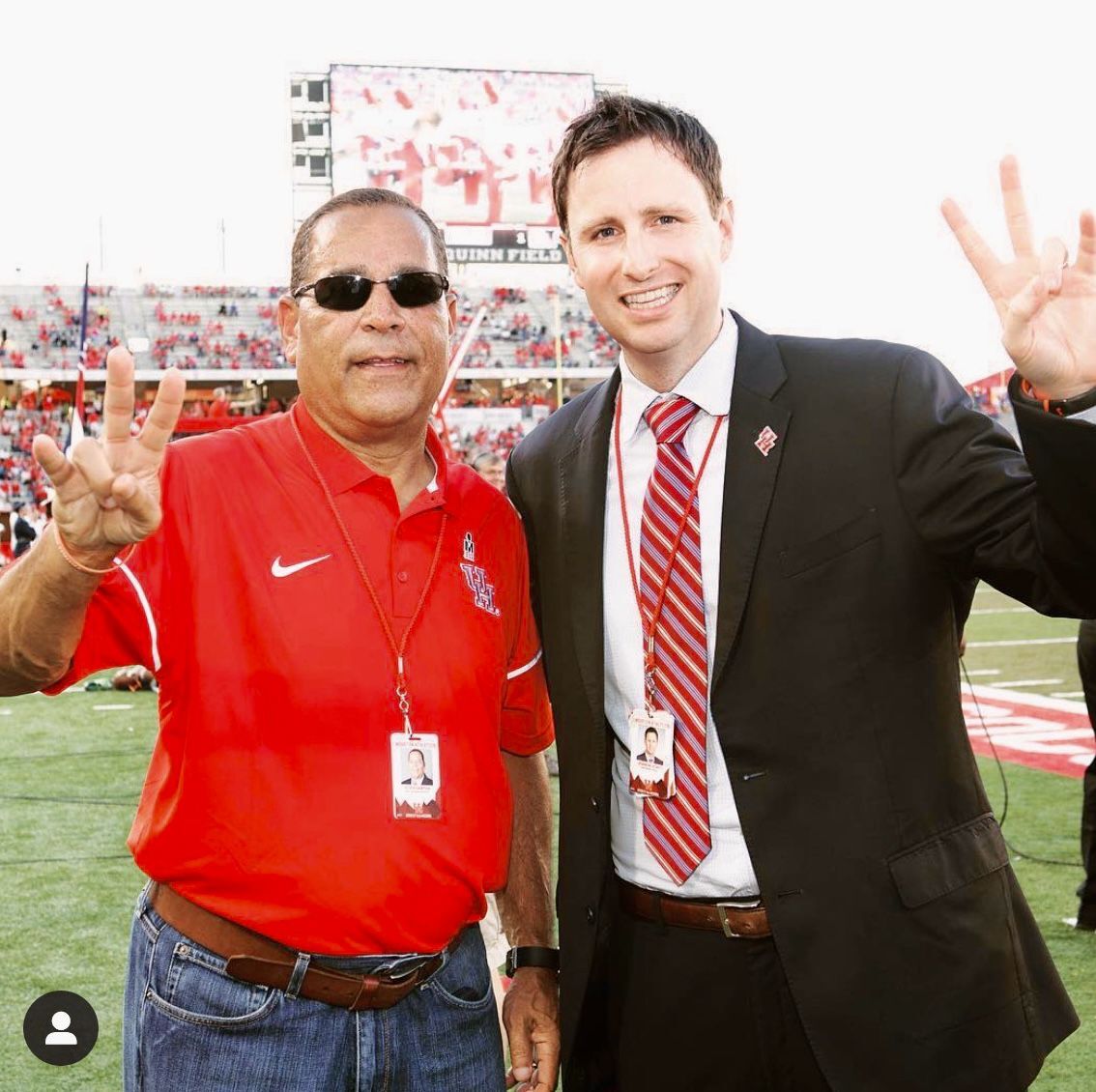 BOISE — Jeramiah Dickey and his family will find themselves in a tough dilemma when Baylor and Houston meet Saturday at 3:14 p.m. on CBS in the first of two Final Four matchups.

Boise State’s new athletic director arrived in January after spending four years at Baylor. Before that, he spent seven years at Houston. He remains in contact with both head coaches, Houston’s Kelvin Sampson and Baylor’s Scott Drew, and has close connections with friends at the two schools.

“It will be hard to watch and not pull for both,” Dickey told the Idaho Press. “I guess it’s a win-win for me. I’m excited. My kids are excited. My daughter, she grew up with Houston and she’s still a Cougs fan. The boys are all about the Bears. It’s a divided household right now.”

Dickey’s wife Elizabeth, daughter Emerson, and sons, Elijah and Easton, just joined him in Boise this week. Maybe the first order of business at the new house? Making sure the TV is set up by Saturday afternoon.

Seeing his two previous employers reach the Final Four is admittedly cool. But it also gives Dickey confidence that Boise State’s basketball program can soon also have success on the national level.

“Being at both places you see the work that goes into it and really what it does is strengthen my belief in the process,” Dickey said. “You look at what coach Sampson has done at Houston and it’s unbelievable considering Houston hadn’t really done much from a basketball standpoint for a while. Same thing at Baylor with Scott — his record speaks for itself.”

Dickey was hired in January as Boise State’s athletic director after previously serving as the Associate Vice President for Athletics at Baylor. He was just back in Waco, Texas, two weeks ago to sell his home and move his family to Boise, and had the chance to go see several of his friends and former coworkers on campus before he left.

Baylor is making its first appearance in the Final Four since 1950. When Drew took over in 2003, the program was in the middle of a scandal that saw one player kill another player and then-coach Dave Bliss try to cover his own rules violations by claiming the player that died was a drug dealer.

In Drew’s first year in 2003 the Bears only had six scholarship players and had to fill the roster with open walk-on tryouts on campus. Two years later the sanctions hit and they weren’t able to play any nonconference games. Yet Drew has led the Bears to at least 20 wins in 11 of the past 13 years — and now into the Final Four.

Dickey was the Vice President of Athletic Operations at Baylor from February 2017 to February 2018 before being promoted. He worked closely with Drew and women’s basketball coach Kim Mulkey among others, and he’d have been with the team at the Final Four this week had he still been there.

“It’s emotional in a lot of ways,” Dickey said. “You look at the staff and I think Scott would be the first to tell you, it takes a team. I’ve been so excited and happy for the people I worked with daily that had a role in that — the external team, Mack Rhoades the AD, all those folks. To have such a challenging season and for it to end in Indianapolis like this, I couldn’t be more happy for them.

“A lot of people played a part. My part was small in comparison to the collective team. It all goes into the process and it’s just been exciting to watch from afar. I still feel like I’m part of it. When you make a change in the middle of the season like this, I’ve still got the updates on my phone and people texting me, donors and staff, and I’m following up with people there as I’m watching. It’s hard not to be part of it, but I’m just so happy and excited for all of them and especially for Scott. He’s earned it and I hope he enjoys it.”

Dickey was also at Baylor when the women’s team went 37-1 and won the NCAA championship in 2019.

While at Houston the program hired Sampson in 2014 and Dickey built a strong relationship with the legendary coach. In a press release issued by Boise State when Dickey was hired, Sampson said he loved him and called it a “grand slam” for the Broncos.

“I got to see coach Sampson early on in the process and how he went about his business,” Dickey said. “Coming into a football school and you’ve seen the videos this week resurface of him out on campus trying to attract fans and get people excited about basketball again, it was really neat to see. He was willing to do anything and everything. It reminds me of when Leon (Rice) started here. You need people like that in your fox hole that are willing to do whatever it takes to get the program to another level.

“I called coach Sampson and thanked him and the same thing with Scott, I reached out to him to congratulate him. They are just good people, two of the most authentic coaches and men that I’ve been around. What you see is what you get. It’s not for show, and I always respected that about them. And they probably don’t know this, but it ties in a lot to who I want to be as a leader and how I want to lead our department. Authentic leadership is important and they are two great examples of that.”

Knowing the history of both Baylor and Houston and the time and energy it took to bring those programs to national prominence has Dickey excited about the prospects of similar success at Boise State. Sure the Final Four might be a bit optimistic at this point, but Dickey said he’s seen what it takes to have success in men’s basketball — and there’s no reason it can’t happen in Boise.

Boise State has never advanced past the semifinals of the Mountain West Tournament, and the Broncos have never won a game in the NCAA Tournament. Boise State hasn’t even been in the Big Dance since 2015.

This year’s Boise State team went 1-5 down the stretch to fall out of NCAA Tournament consideration and into the NIT, where they beat SMU but lost to eventual champion Memphis in the quarterfinals.

Seeing some fans upset with the Broncos’ disappointing finish to the season has only reinforced his thoughts on Boise State’s potential.

“Absolutely,” Dickey said. “That’s been the exciting thing for me this year, to see the expectations in basketball from our fan base. That excites me. I do believe that we can get there and improve and I’m so excited for this offseason. There’s so much more that we need to do from an administrative standpoint, whether that’s in athletics or from a campus standpoint, and I believe there’s 100 percent buy-in for that.

Dickey said “I think there’s some things we’re going to be able to do” to help the basketball program from an administrative standpoint. He mentioned a “collective approach as a department” for things such as increasing student and fan attendance and improving the fan experience at games as starting points.

“That all plays into the overall success of the program,” Dickey said. “I’ve witnessed that firsthand at both Houston and Baylor. Everything counts. Everything matters.”

One thing that apparently won’t happen? A coaching change. Dickey voiced confidence in Rice and the ability for the two of them to reach new heights together.

“I told Leon this — I’m in the fox hole with him,” Dickey said. “We’re going to go out and we’re going to do great things and that’s what excites me so much about this first offseason together.”

Dickey has been active on social media since arriving at Boise State in January, which has proven to be both good and bad. He’s seen some of the negative reactions from fans towards Rice and the basketball program for their lack of success in March — and he welcomes it. Having high hopes and goals is better than nothing at all.

“They have the same expectations that they do for our football program and I think that shows you how far Leon and the staff have brought this program,” Dickey said. “To this year becoming the winningest coach in program history, it says a lot about Leon and his process.

Seeing Houston and Baylor in the Final Four doesn’t hurt either.