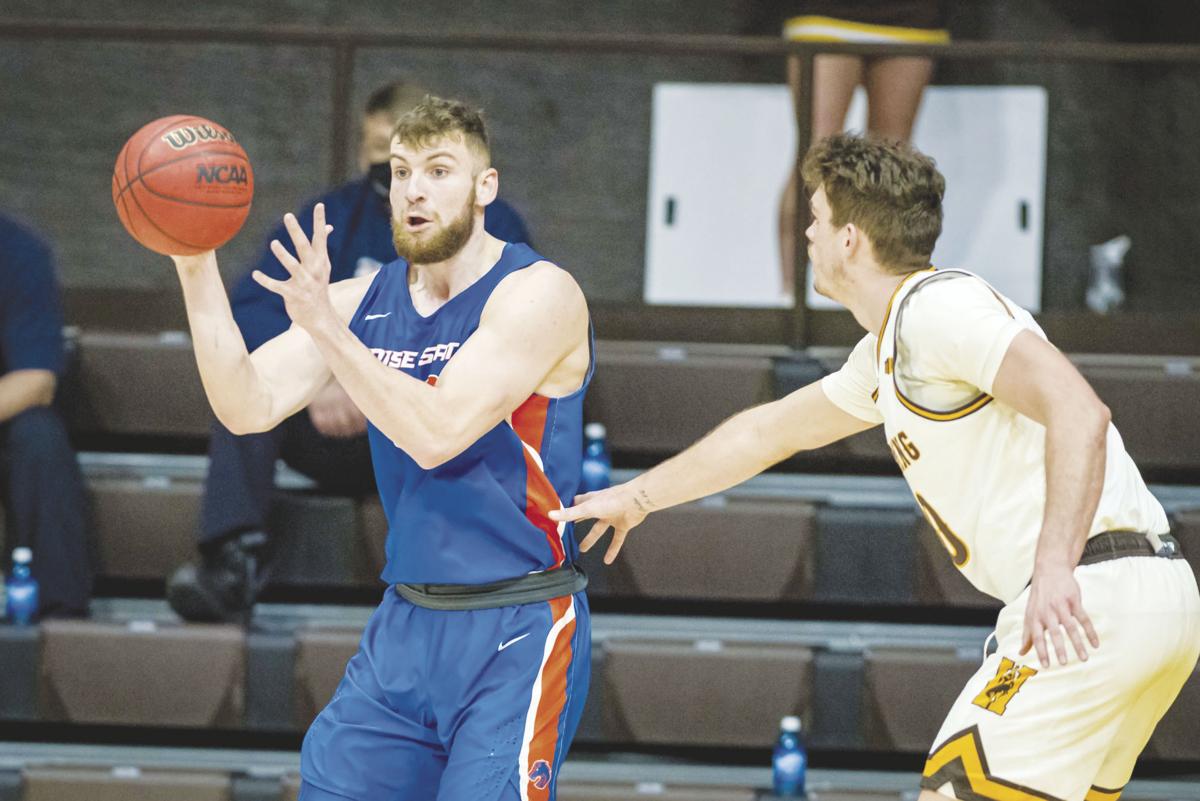 Boise State’s Mladen Armus catches the ball before taking a shot Monday night against Wyoming at Arena-Auditorium in Laramie, Wyoming. The Broncos won the game, 83-60. 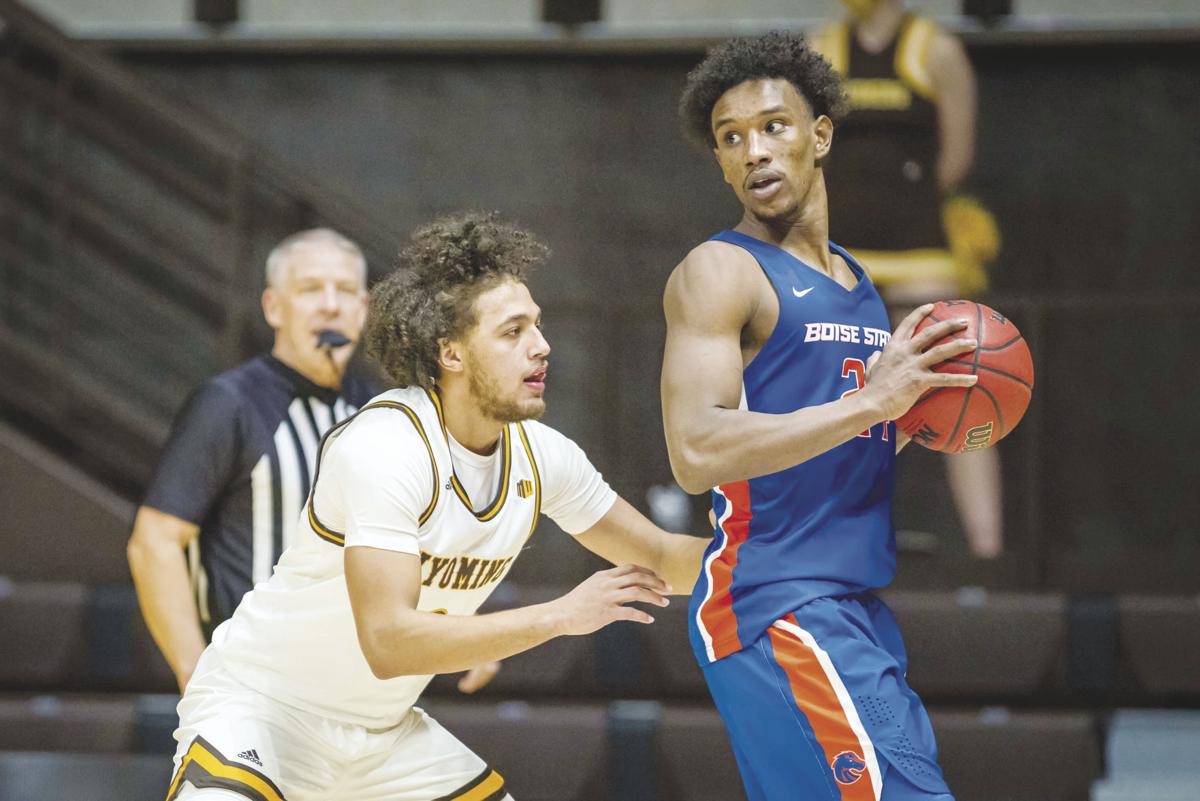 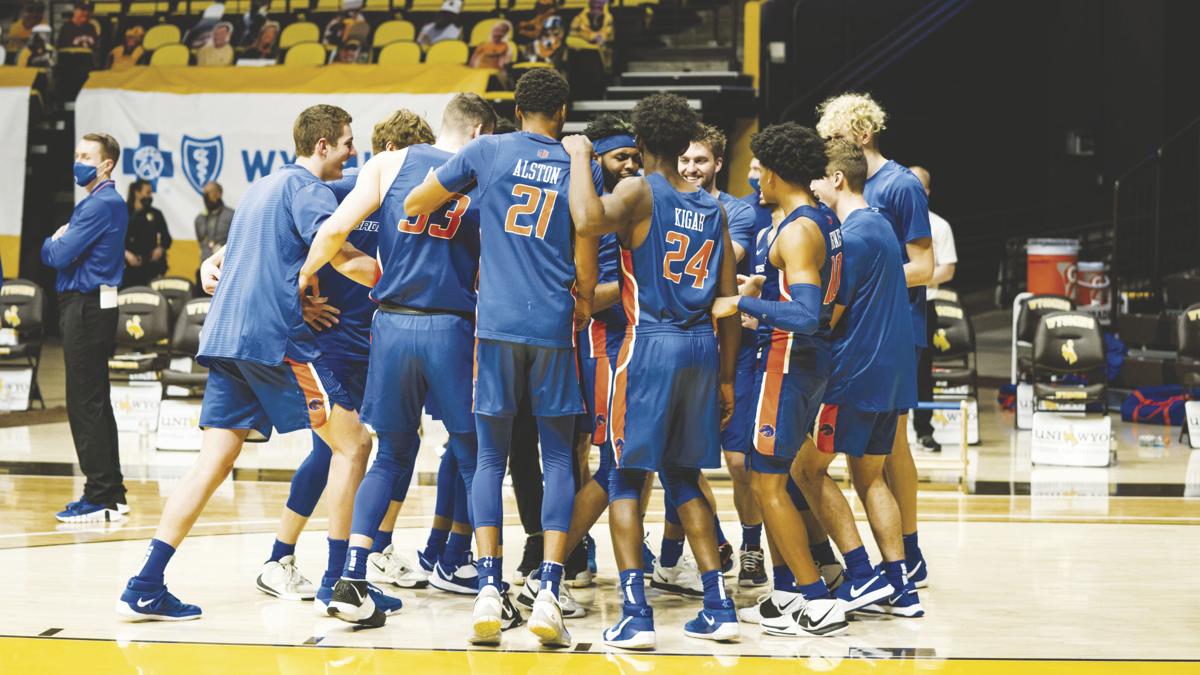 Boise State huddles up prior to the start a game at Wyoming on Jan. 11.

Boise State’s Mladen Armus catches the ball before taking a shot Monday night against Wyoming at Arena-Auditorium in Laramie, Wyoming. The Broncos won the game, 83-60.

Boise State huddles up prior to the start a game at Wyoming on Jan. 11.

LARAMIE, Wyo. — No Boise State men’s basketball team had won 11 games in a row prior to Monday night.

These Broncos have proven they aren’t like any of the others.

Boise State ended the game on a 20-2 run to turn a five-point lead into a 83-60 rout Monday night at Arena-Auditorium in Laramie.

The win established a new program record with 11 consecutive wins.

“It feels great to make history at our school,” forward Abu Kigab told the Idaho Press. “I’m very proud of my guys for playing hard and competing with an edge. For us it’s all about that growth mindset. We have to keep putting in the work and the results are going to show for themselves.”

The results showed again Monday. Devonaire Doutrive and Kigab each had 21 points for the Broncos, who led 61-43 before Wyoming ripped off a 15-2 run to pull within 63-58 with 8:19 to play.

But the Broncos answered, scoring the next nine points and 20 of the final 22 — including four 3-pointers in the final four minutes — to enter their names into the history books.

“It’s quite an accomplishment because every night there’s going to be something and some adversity you face and you have to respond and this team has been elite at responding,” Boise State coach Leon Rice said. “People will look at this and go ‘oh a 23-point win, that was easy’. No, that was not even close to easy. These guys had to battle.

“It’s hard to win Division I games and people will say that was an easy game. No it was hard fought game. Wyoming battled.”

Boise State improved to 11-1 overall on the season and 7-0 in Mountain West play.

The Broncos were without starter Emmanuel Akot for a second straight game due to a sore Achilles. The Broncos were also playing their fifth game in the past 12 days. Throw in foul trouble to both Mladen Armus, RayJ Dennis and Doutrive in the first half — and the Broncos appeared to be in some trouble.

But Kigab bailed them out with 15 points in the first half to help the Broncos lead by 43-35 at the break.

They started fast in the second half and appeared ready for a blowout win before Wyoming’s hot shooting pulled them within 5 with 8:19 to play.

But Armus and Akot had dunks and Doutrive hit a 3-pointer to cap a 9-0 run that made it 72-58. After two free throws for Wyoming, Boise State scored the next 11 points to finish the game.

Wyoming scored two points in the final 8:19 of the game as the Broncos again leaned on their defense to come out on top.

“We had a little adversity but we came together as a group,” Doutrive said. “We locked in and we told each other we can complete the mission and we made it happen.

“We have a lot of weapons on this team and real versatile guys. I feel like it could be a different person getting it done for us on different nights.”

Maybe the most notable performance came from the 6-foot-10 center Armus, who had 10 points and 14 rebounds in his best game at Boise State. He showed off some nice post moves, including two reverse layups and a nice drive from the top of the key.

“It was a great feeling,” Armus said. “I enjoyed it. It was fun. I know I have a lot to show to be honest and tonight was the moment I showed what I can do.”

Boise State scored the first eight points of the game and upped the lead to 19-10 on back-to-back buckets from Max Rice. Doutrive connected on the first 3-pointer of his Boise State career to up the lead to 24-13 before scoring on a crazy acrobatic layup while falling to the ground and hitting the ensuing free throw to up the lead to 30-17 with 9:03 left in the half.

But Wyoming scored the next seven points and ended the half on a 9-2 run to cut Boise State’s lead to 43-35 at the break. The Broncos shot 53 percent in the first half but scored just 13 points in the final 9:03 after getting off to a hot start.

Boise State played nine players in the first half after just seven saw the court in last Friday’s win against Air Force. Part of that was due to the elevation and wanting to keep guys fresh, and part was due the foul trouble.

But the Broncos had enough in the tank in the second half, even when Derrick Alston Jr. went out with an injury with about 7 minutes left in the game, to do what they’ve done plenty of lately — win. Boise State hasn’t lost since a 10-point season-opening loss to No. 8 Houston way back on Nov. 27.

But there wasn’t much time to celebrate. The Broncos have another game to prepare for.

“We don’t really talk about it,” Rice said of the streak. “We’re on to the next one.”

Boise State will look to extend the record winning streak to 12 games Wednesday night when they conclude the two-game series with Wyoming. Tip off is scheduled for 7 p.m. and the game will air nationally on the CBS Sports Network.