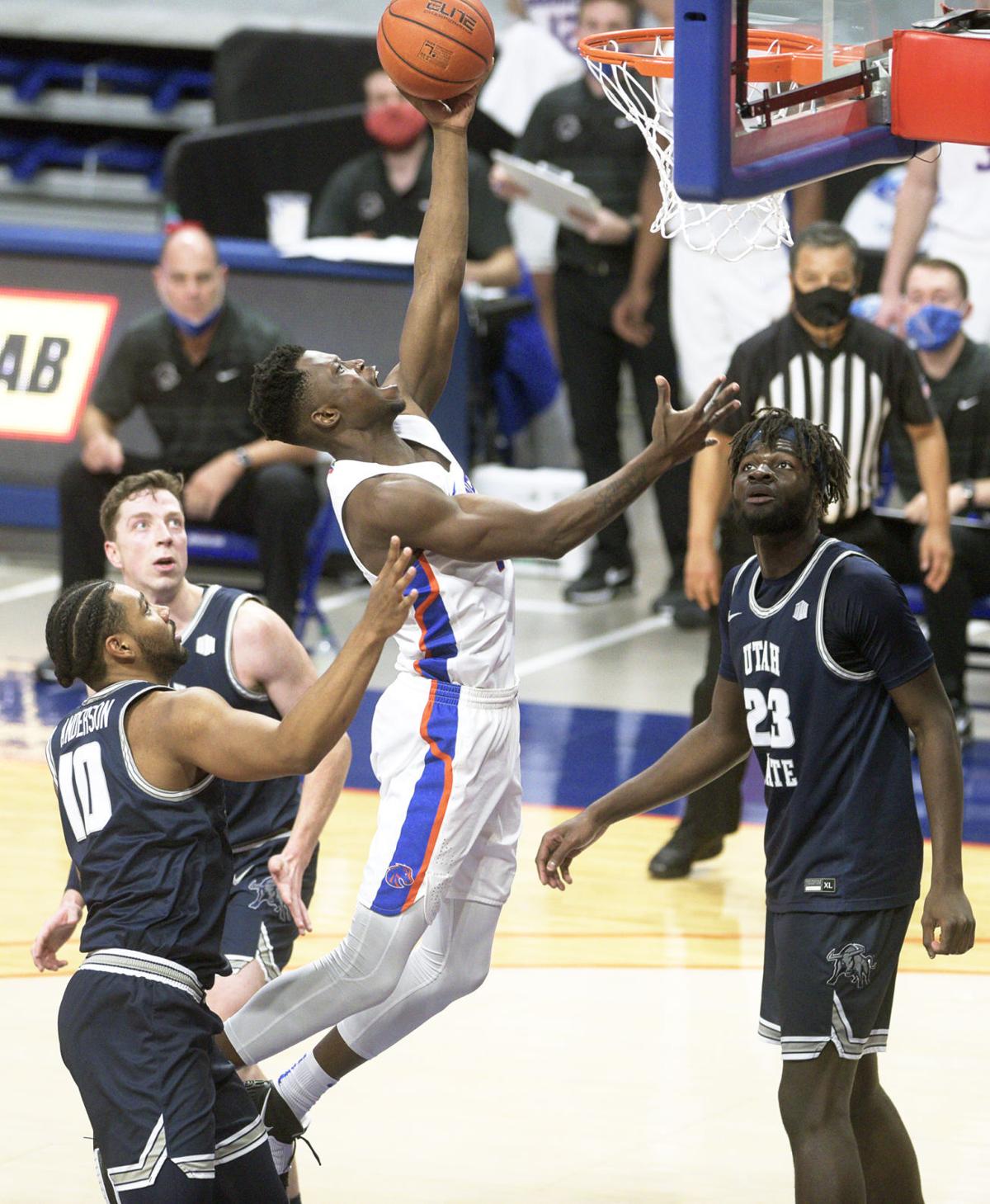 Boise State forward Emmanuel Akot (14) goes in for a layup during the game against Utah State at ExtraMile Arena on Wednesday. 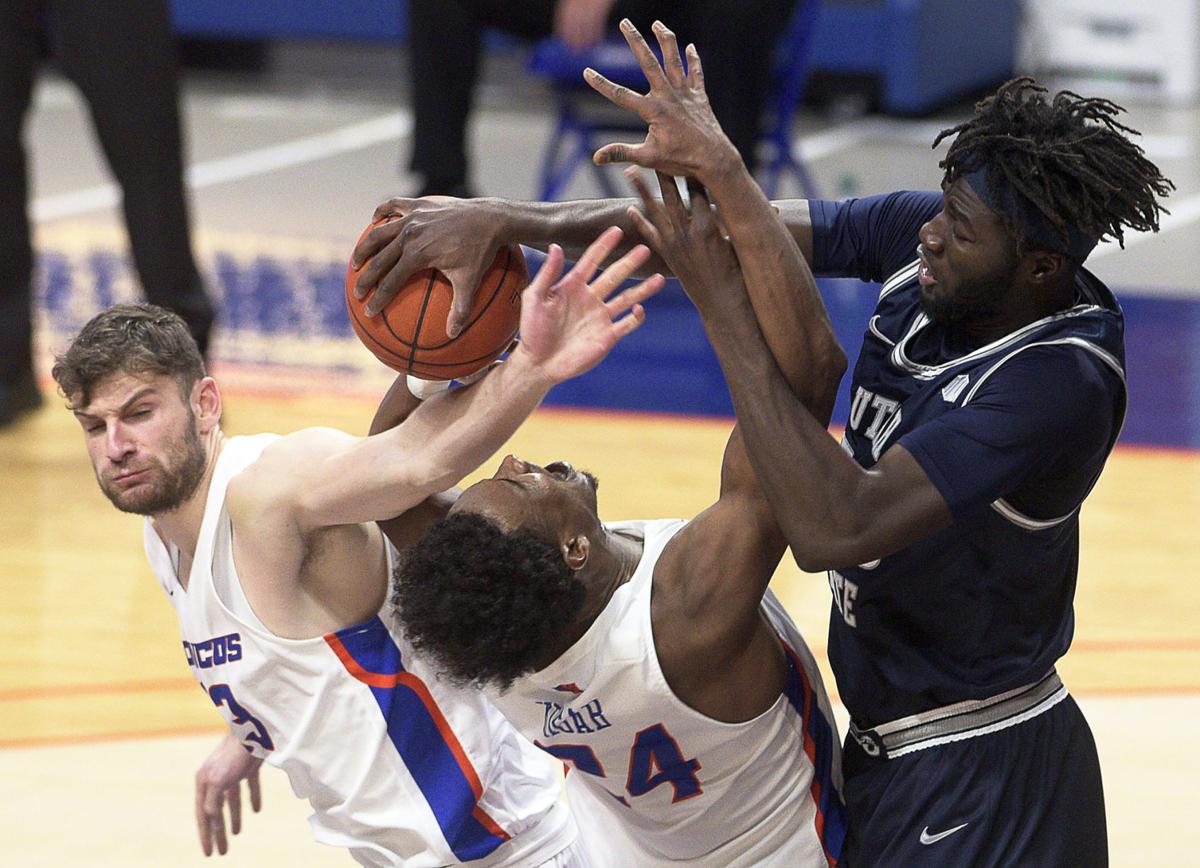 Boise State forward Mladen Armus (33) and forward Abu Kigab (24) battle with a Utah State player for control of the ball during the game against Utah State at ExtraMile Arena on Wednesday. 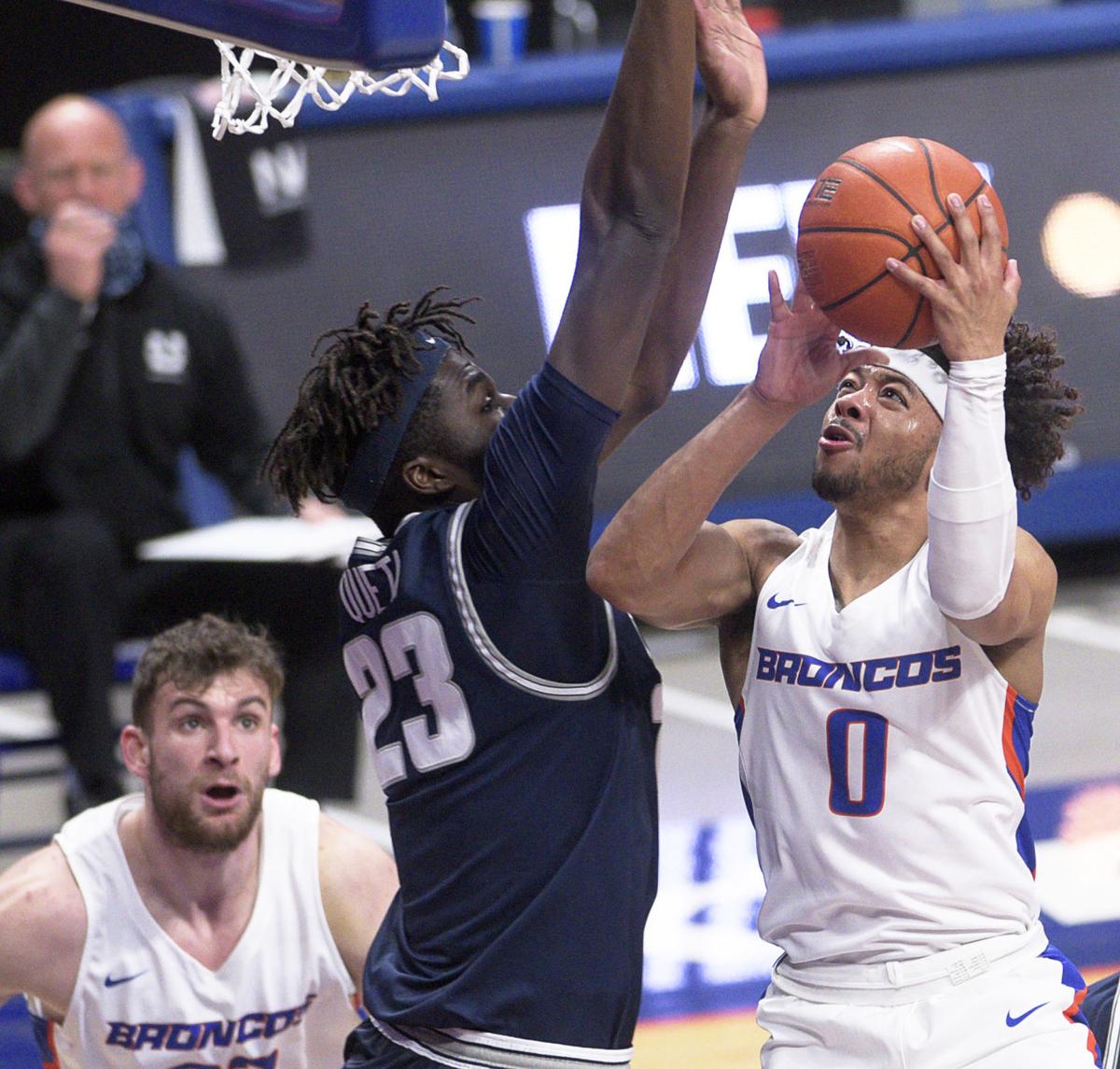 Boise State guard Marcus Shaver, Jr. (0) goes in for a layup during the game against Utah State at ExtraMile Arena on Wednesday. 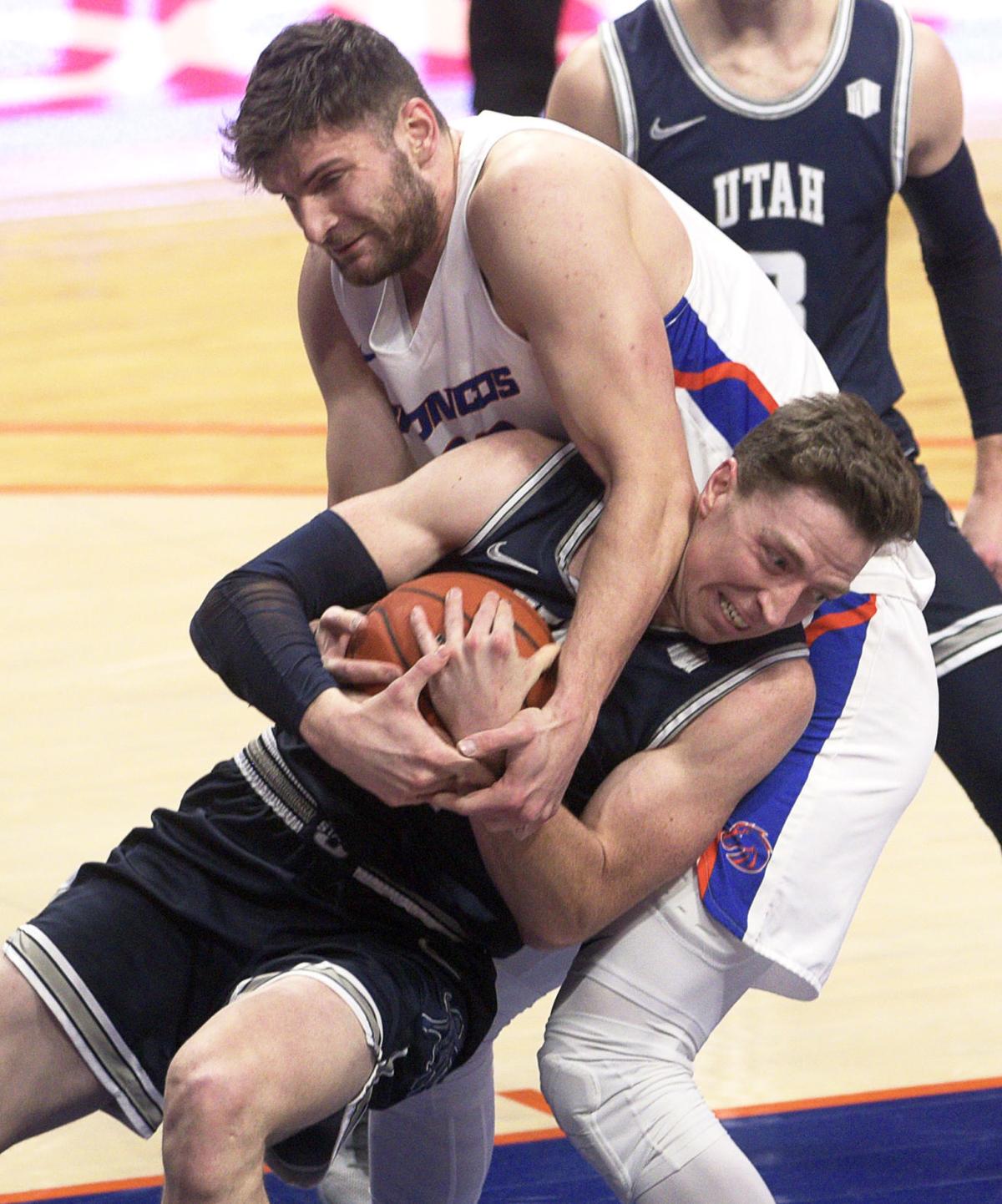 Boise State forward Mladen Armus (33) battles a Utah State player for control of the ball in a game Wednesday at ExtraMile Arena. 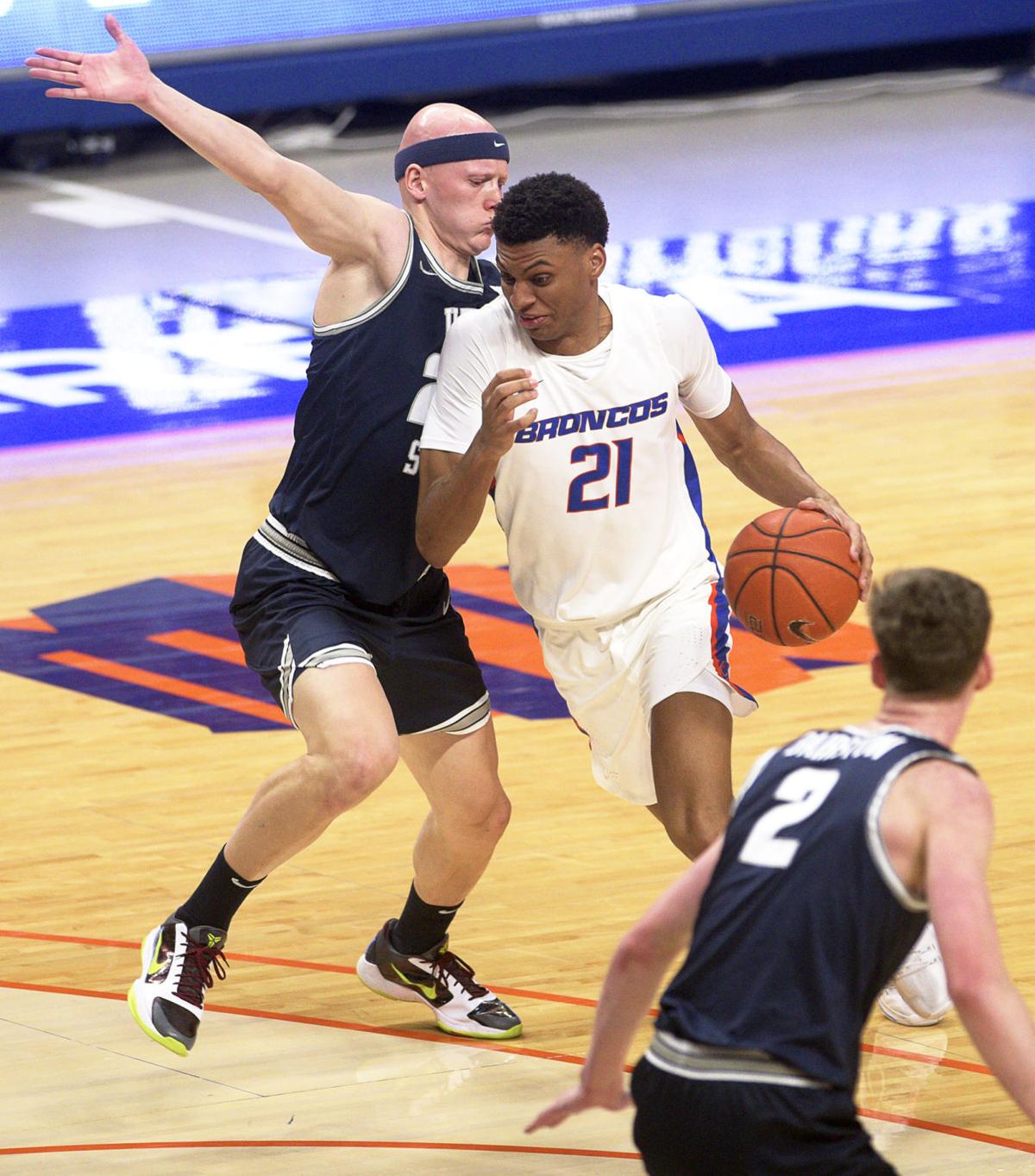 Boise State forward Emmanuel Akot (14) goes in for a layup during the game against Utah State at ExtraMile Arena on Wednesday.

Boise State forward Mladen Armus (33) and forward Abu Kigab (24) battle with a Utah State player for control of the ball during the game against Utah State at ExtraMile Arena on Wednesday.

Boise State guard Marcus Shaver, Jr. (0) goes in for a layup during the game against Utah State at ExtraMile Arena on Wednesday.

Boise State forward Mladen Armus (33) battles a Utah State player for control of the ball in a game Wednesday at ExtraMile Arena.

BOISE — Loud music blared over the speakers, fans stood and cheered, and Boise State’s players celebrated on the court.

Playing in front of 679 fans for the first time all season, the Broncos got 26 points from Derrick Alston Jr. and some huge buckets down the stretch from Marcus Shaver Jr. to overcome a second-half deficit and top Utah State, 79-70, Wednesday night at ExtraMile Arena.

With the win Boise State (17-4, 13-3 MW) moved back into first place in the Mountain West standings ahead of Friday’s rematch.

“It was good to have Bronco Nation in there cheering and supporting us because we needed them today,” Alston said. “That was a big win for us, and it was a total team effort. I’m proud of the guys and how we stuck with it.

“Winning is always a good feeling and especially to have people out there finally see us play live, it was definitely a great feeling. The crowd was very active and loud and I’m super thankful they were there.”

Alston had 18 of his 26 points in the first half to keep the Broncos in it, and Shaver took over down the stretch. The Portland transfer had eight straight points late in the second half to turn a 63-62 lead into a 71-64 advantage.

Shaver finished with 12 points — his most in nearly three weeks — and added five rebounds, two assists and a huge steal under the basket to help Boise State jump over Utah State (14-6, 11-3 MW) into the top spot in the league standings.

“I missed that feeling, the environment and playing in front of fans and family, it’s definitely a game-changer. I missed that energy and the energy the fans give us. It helps a lot.”

The Broncos won despite a career-high 32 points from Utah State center Neemias Queta, a 7-foot-1 NBA prospect who did pretty much whatever he wanted. Queta made 12 of 21 shots from the field and 8 of 9 free throws and also grabbed 10 rebounds in 32 minutes.

Queta likely would have done even more damage had he not been limited a bit due to four fouls.

“Queta is one of the best big guys we’ve seen in a long, long time and we’ve seen some good ones,” Rice said. “He’s a heck of a player and they have a great plan to get him the ball and they have shooters all around him. He can drive a hard bargain at anybody. We’ve got some pretty good defensive big guys, but he’s a load down there.”

RayJ Dennis, Abu Kigab, Mladen Armus and Max Rice each added eight points for the Broncos, who won despite being outrebounded 37-32.

The Boise State athletic department distributed roughly 900 tickets for Wednesday’s game, but the listed attendance was 679. The cheerleaders attended for the first time all year, while the band is expected to be on hand Friday.

Boise State trailed 54-51 midway through the second half when Shaver stole the ball under the Broncos’ basket and found Rice for a huge 3-pointer to tie the game at 54-all.

After a Kigab 3 put the Broncos up 57-56, Rice drove and scored and drew a foul on Queta. Rice hit the free throw and the Broncos went up 60-56.

After two buckets from Utah State, including one from Queta to tie the game at 60-60, Dennis nailed a huge 3-pointer in the corner to put the Broncos up 63-60.

The Broncos never trailed again, thanks in large part to Shaver. He hit a bucket to make it 65-62, and then followed a basket from Utah State with a long 3-pointer at the end of the shot clock to push the lead to 68-64.

Shaver then drove the lane on Boise State’s next possession and scored on a tough layup, got the foul call and made the free throw to push the lead to 71-64 with 4:09 left.

“That was anybody’s game and we made a few shots,” Rice said. “We made some hustle plays that were big. ... That’s what we need this time of year to win these games. We need everybody playing at their best. DA kind of carried us a little bit in the first half and then everybody else helped him a lot more in the second half.

“If he has to go get 36, we probably don’t win that game. But his 18 in the first half kept it close and then everybody kind of chipped in in the second half. We had some big bucket from the other guys.”

It was a game many had been anticipating for some time, and one that had even extra hype once it was announced a day earlier that 900 fans would be allowed. It lived up the billing and then some, with the two teams combining for 12 ties and six lead changes in the back-and-forth affair.

But while one win is nice, a win Friday would be huge in helping the Broncos secure a spot in the NCAA Tournament. And the Broncos had already turned their attention toward the next one Wednesday night.

“I think we already kind of turned it,” Alston said. “We’re going for the sweep. Friday is a big one for sure.”

Boise State has now won three games in a row following a two-game sweep by Nevada that had many wondering whether the Broncos were just in a rough stretch or being exposed for playing an easier schedule earlier in the season.

It appears to have just been a short rut.

“There’s good teams and everybody is playing good right now,” Rice said. “The other team is not going to just come lose the game. You have to go find a way to win it. And we were fortunate to find a way tonight.”

Friday’s game is scheduled for 8 p.m. and it will be televised nationally by FOX Sports 1.