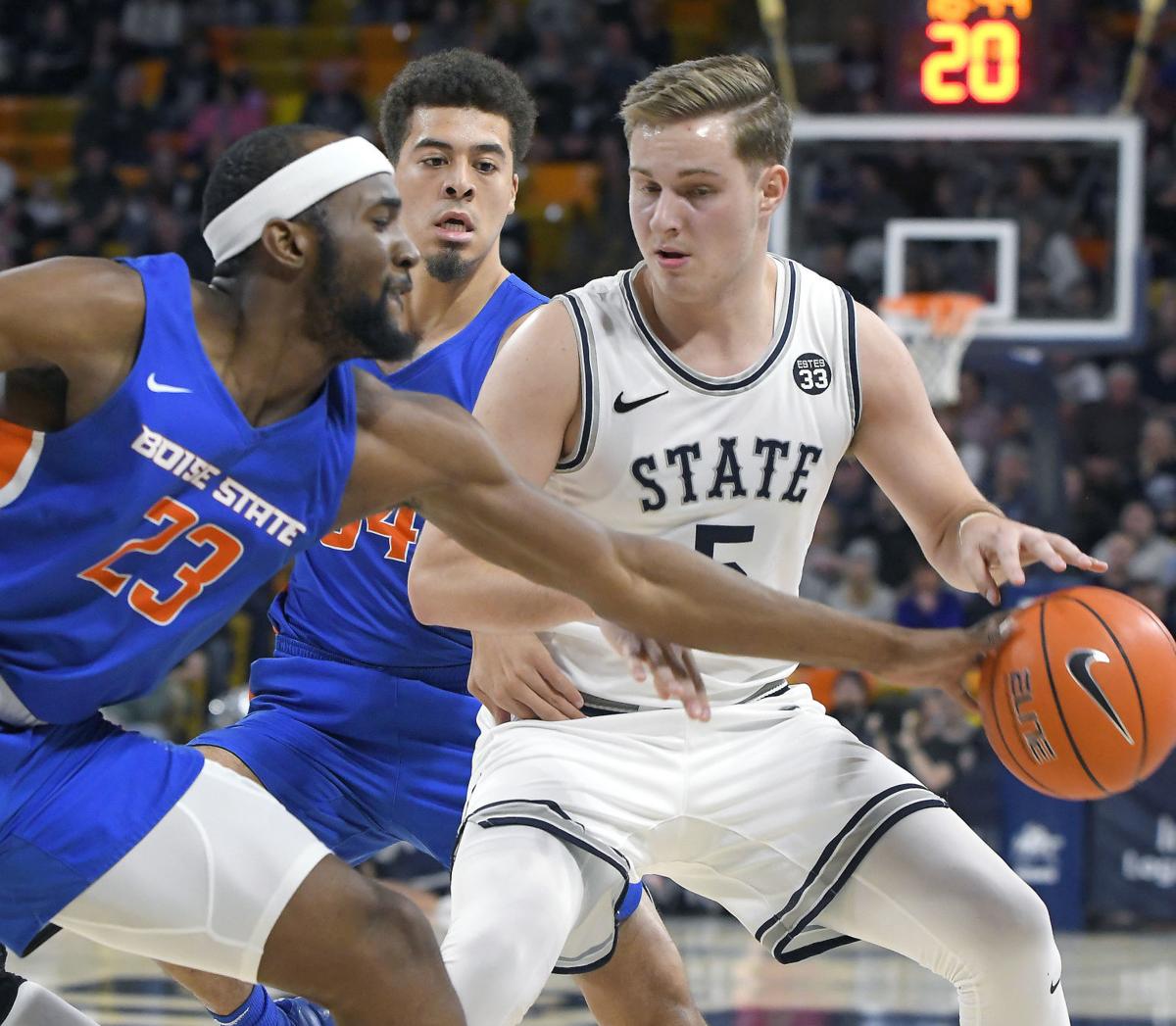 Boise State forward RJ Williams (23) knocks the ball out of the hands of Utah State guard Sam Merrill (5) during a game Saturday. 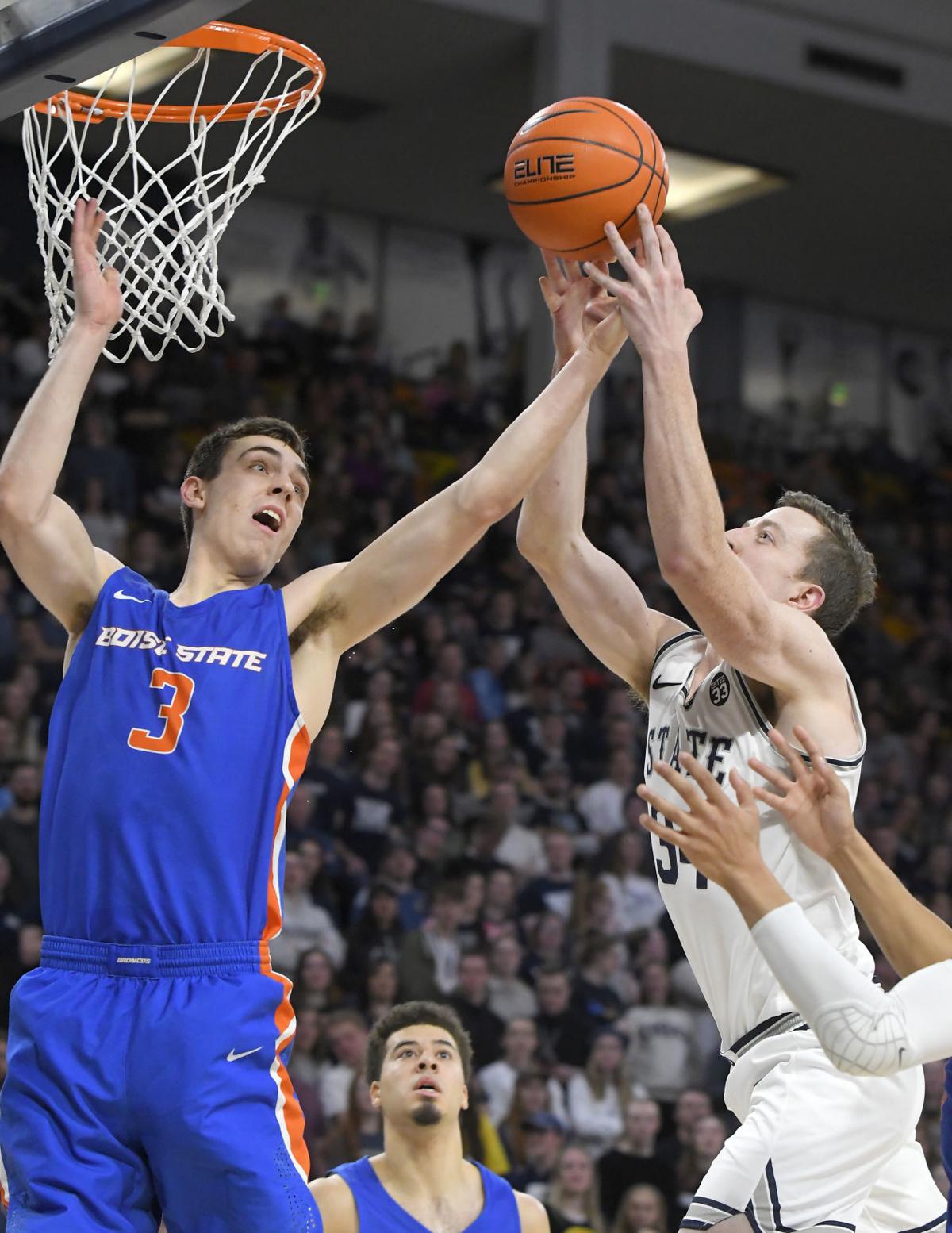 Boise State forward RJ Williams (23) knocks the ball out of the hands of Utah State guard Sam Merrill (5) during a game Saturday.

LOGAN, Utah — Down by 11 points in a hostile environment, the Boise State men’s basketball team did all it could to pull off another crazy comeback against Utah State late Saturday night.

The Broncos didn’t have quite enough magic this time around.

Boise State rallied to pull within one point in the final minute, but couldn’t get over the hump in a frustrating 70-61 loss in front of a sellout crowd at the Dee Glen Smith Spectrum.

"Under a minute and it's a one possession game and that's where we wanted to be," Boise State coach Leon Rice said "Our guys were competing. I was really proud with the way they fought. "

The game featured 49 fouls and 54 free throw attempts - 35 of which came from Utah State. There were two flagrant fouls called against Boise State, two double fouls and a key no-call when Alex Hobbs was driving for a go-ahead layup with two minutes left.

"There were some weird plays that I'm interested to look at," Rice said. "I'm not allowed to comment on the officiating. I think you guys are going to have to give your own opinions on those because I'm not allowed to."

Down 62-61 with 32 seconds left, a foul on Boise State’s Riley Abercrombie was ruled to be intentional, which gave Neemias Queta a pair of free throws and then Utah State the ball.

Queta hit them both, and the Broncos were forced to foul the near-automatic Sam Merrill. He hit both free throws to give Utah State a two-possession lead at 66-61 with 29 seconds left, and the Broncos didn't score again.

"My brain is really, really searching for the way to say it, but I can't comment on any of that," Rice said. "I'm not allowed to. There's really nothing I can say about that, so I'll say this. I'm really proud of our guys, we battled through a lot of adversity and battled through a tough place to play, a good opponent, some tough circumstances that maybe should be reviewed, but we'll see."

Boise State (16-9, 8-5 MW) dropped into a third-place tie with Utah State and Nevada in the Mountain West standings with five games left.

Justinian Jessup had 20 points and Hobbs added 15 for the Broncos, who hung tough in maybe their toughest road environment yet but couldn’t make enough shots down the stretch.

"We were where we wanted to be," Hobbs said. "It speaks to the belief in us and the belief the coaching staff has in us. We were down 11 at the half but we felt like if we could fixed our lapses with the game plan we had we would make a run in the second half and be there at the end."

Utah State dominated the glass to a 48-31 margin, and had a 30-11 advantage in made three throws.

Both teams dealt with crazy foul trouble. The Broncos had two players — post players RJ Williams and Robin Jorch — foul out before the game was over. That left the smaller, skinnier Abercrombie to have to come off the bench and try to guard the 7-foot Queta, who was allowed to do whatever he wanted inside down the stretch.

Queta had 21 points, eight rebounds and five blocks and went 11 for 14 from the foul line.

"He's big and the hard part is if he's allowed to dislodge and dislodge, those guys have no chance because they are giving away 50 pounds," Rice said. "You just tell them to hold their ground and hope they get rewarded for it."

Derrick Alston, Jessup and Williams didn’t score in the first 12-plus minutes of the game, but the Broncos somehow only trailed 22-11 after Alston finally entered the scoresheet on a free throw with 7:01 left. Jessup followed with his first points on a basket with 5:58 left and Hobbs followed with a free throw to cut the Utah State lead to 24-15.

Jessup hit a 3-pointer to bring the Broncos within nine at 27-18, but that’s when things got wacky.

A scrum on the floor led to a foul on Queta with 4:13 left. But after screaming from the fans and a lengthy video review, an additional foul was called on Williams. Both Williams and Queta each hit a pair of free throws, and Merrill hit a 3-pointer on Utah State’s ensuing possession to give the Aggies a 32-20 lead.

Merrill got called for his third foul with 2:27 left, and Alston and RayJ Dennis both had baskets to send the Broncos into the locker room with a 35-24 deficit.

The Broncos were frankly lucky to only be down 11 points at the break after shooting just 2 of 13 (15.4%) from 3-point range and getting outrebounded 24-15. The Aggies also had a 12-4 advantage in made free throws, but made just 1 of 9 from beyond the 3-point arc to let the Broncos stay within striking distance.

Boise State charged out of the gates in the second half and cut the deficit to 37-31 on a dunk from Williams. Alston had a layup attempt blocked by Queta that would have brought the Broncos closer, and Utah State followed with five straight points to surge back ahead 42-31 with 15:01 left.

Merrill picked up his fourth foul early in the half and sat on the bench for quite a while. The Broncos took advantage, going on a 9-0 — capped by an and-one from Jessup — to trail by just two at 42-40 with 11:50 to play.

A driving layup from Hobbs pulled them within one at 60-59 with 2:30 left, but the Broncos were unable to take the lead. Hobbs had a chance on the next possession, but he missed a layup and no foul was called on Utah State.

"Its my job to make it so I'm not going to say if it was a foul or wasn't a foul," Hobbs said. 'That's a shot I feel like with or without the foul I should finish, so I'll get back in the gym and leave it out of their hands next time and just have the skill to make it."

The Aggies cemented the game at the foul line, not allowing the Broncos to pull off what would have been a second big comeback against them in three weeks.

"This was set up to be a tough night and a lot of teams could have got buried here and it could have been a 30 point loss," Rice said. "There's no moral victories, we're way beyond that...but I love this team and I love being around them and coaching them and going to battle with them because I know I can count on them to keep fighting."