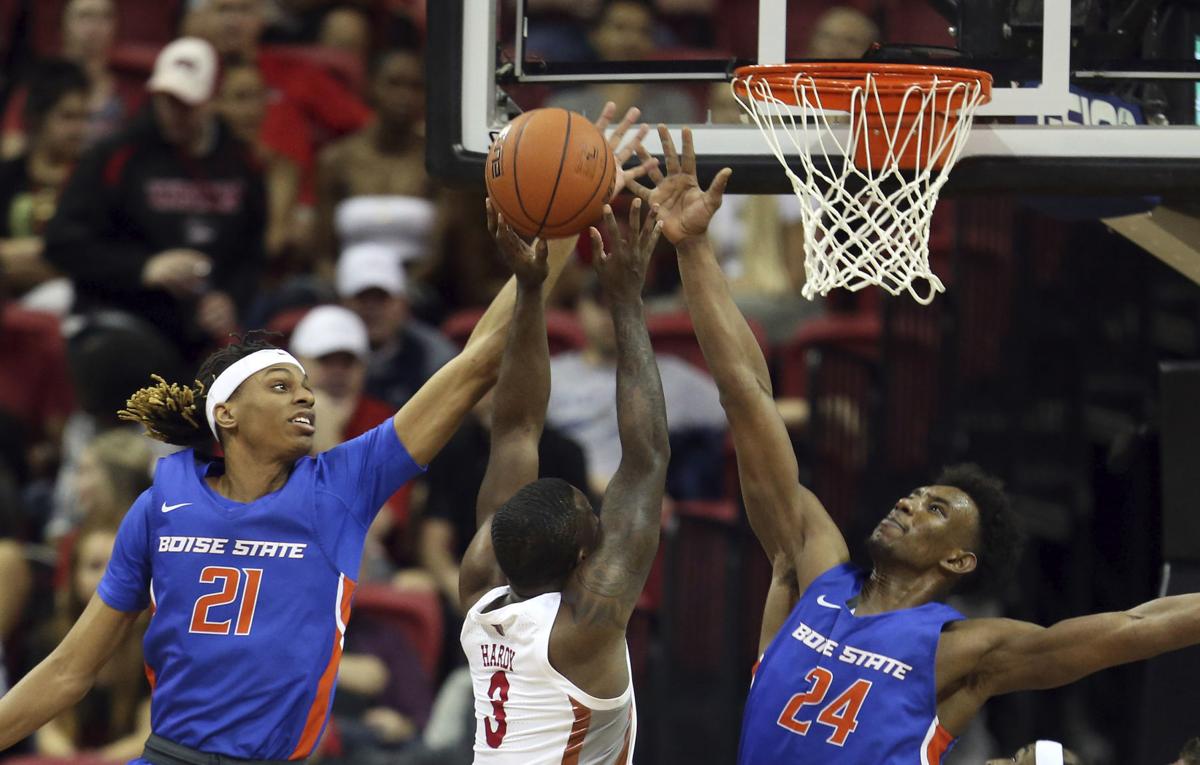 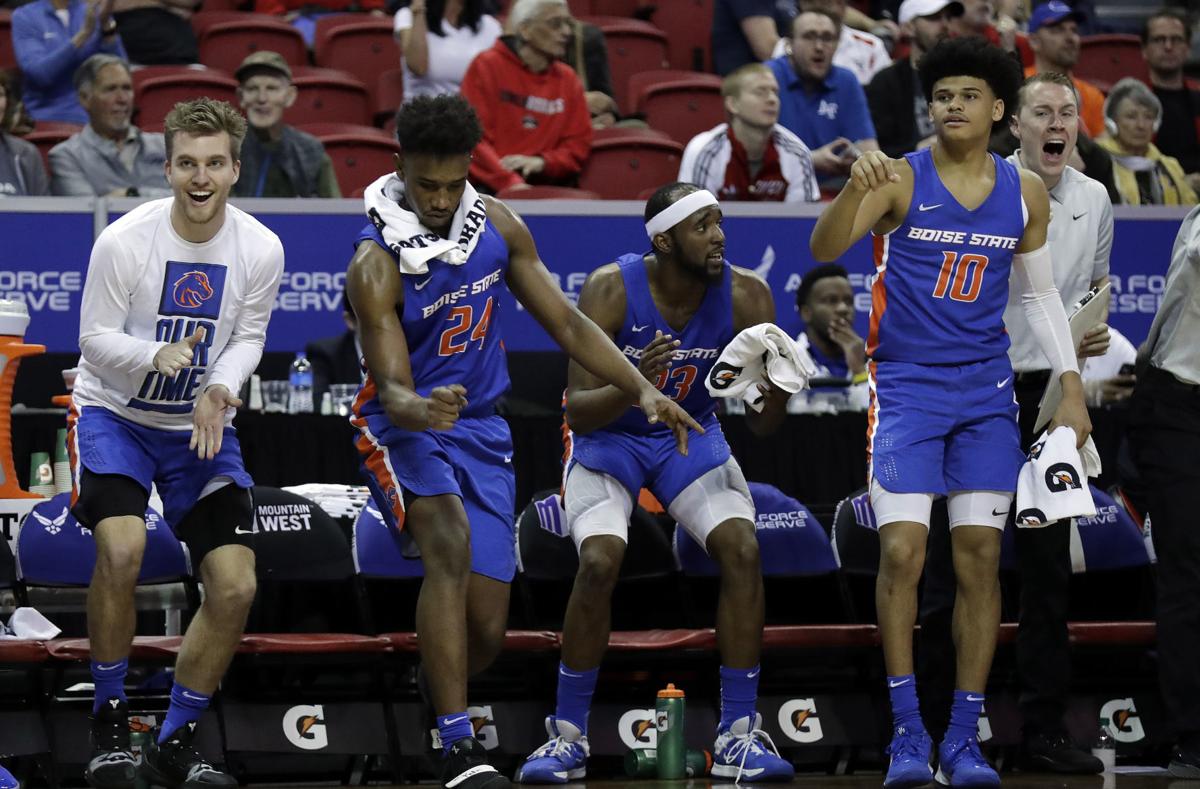 The Boise State bench reacts during the second half of a Mountain West Tournament game against UNLV on Thursday. 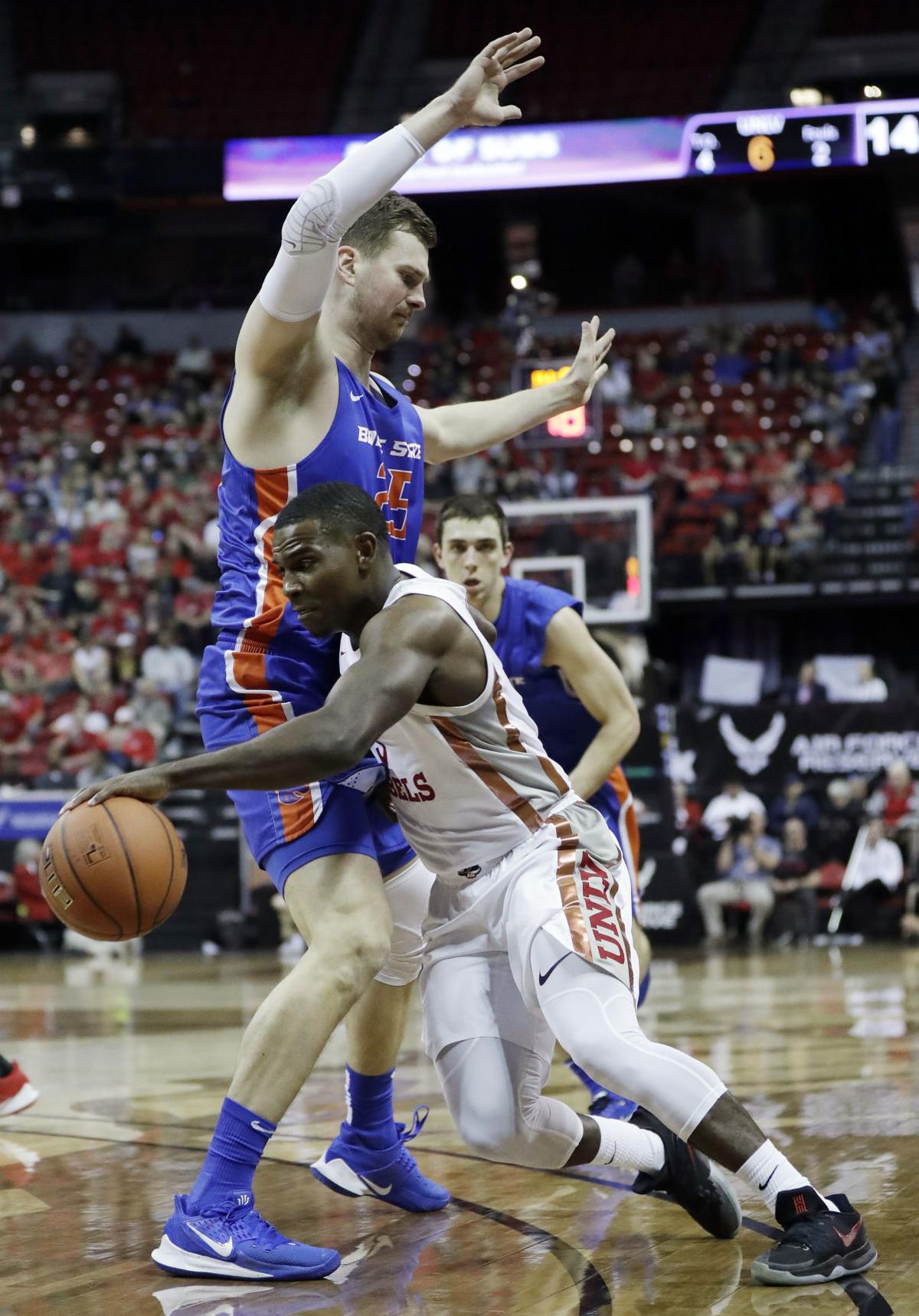 The Boise State bench reacts during the second half of a Mountain West Tournament game against UNLV on Thursday.

LAS VEGAS — Barely a week after playing maybe its worst game of the season, the Boise State men's basketball team returned to play the same team in the same building.

The Broncos won the game that mattered Thursday afternoon.

RJ Williams had 23 points and 15 rebounds and Justinian Jessup had 19 points and hit some key free throws down the stretch, as the No. 5-seeded Broncos upset No. 4 seed UNLV 67-61 in the quarterfinals of the Mountain West Tournament.

"I'm just really proud of our guys," Boise State coach Leon Rice said. "We came in here last week and they handed us our hats. But we responded the right way, like these guys always do. We adjusted some things and it was on them. They had to come back down here and play the home team and play a team that just stuck it to us."

The Broncos traveled to Las Vegas eight days ago, suffering a 76-66 loss to the same UNLV team. In one of Boise State's worst games of the season, the Broncos allowed 42 points in the paint and let UNLV shoot better than 50% from the field.

"We just flipped the switch and had a different mindset," Boise State senior Alex Hobbs said. "We came out here last week and dropped a goose egg. It was probably the worst game we played all year, but luckily enough we knew we had another 40 minutes and we spent the last week getting ready for this game and this moment."

Rice was weirdly secretive earlier this week when asked how the Broncos planned to improve upon their poor defense from last week's loss, saying "that’s why people are going to want to tune in to the game."

Those who watched Thursday saw a much different and more aggressive effort from the Broncos defensively. They strategically packed the key every time UNLV tried to drive, often with all five players on the court, and essentially built a wall on the inside to keep the Runnin' Rebels from getting to the rim.

Boise State's plan to clog up the lane forced UNLV to put up a lot of outside shots. And the Rebels struggled from deep, going just 4 for 14 in the first half and finishing 9 of 27 (33.3%).

"We really locked into the game plan," said Derrick Alston Jr., who had 16 points. "Obviously they kind of torched us in the paint last game and we knew that was going to be a big factor. We just trusted the game plan and trusted each other and had faith in each other that we could get it done."

Eight days ago the Broncos had just 13 points with 3:30 left in the half and trailed by as many as 27 points in the second half. It was a much different game from the start Thursday.

Boise State improved to 3-6 in the quarterfinal round of the Mountain West Tournament. Waiting for it is San Diego State, which is ranked No. 5 nationally and sits at 29-1.

The Broncos suffered two ugly losses to the Aztecs earlier this season, but they enter Friday night's matchup with no pressure and nothing to lose.

"We haven't played near our best games against them so hopefully we can do that and execute a good game plan and come out with a victory," Jessup said.

After Jonah Antonio hit a 3-pointer for UNLV, Williams hit a crazy turnaround fadeaway from the baseline to put the Broncos up 49-39 with 8:30 left.

"It means the world to me," Williams said about recording his fourth 20-point game with the season on the line. "It was fun whenever you can help the team like that."

But UNLV refused to go away, and back-to-back 3s from Jonah Antonio cut the Boise State lead to just 52-49 with 4:30 to play.

With Boise State badly needing points to hold off the UNLV comeback attempt, Williams found Hobbs with a beautiful bounce pass, and Hobbs made an acrobatic falling layup to put the Broncos up 63-58 with 25 seconds left.

It was Hobbs' only basket, but it was maybe the biggest and most important play all game for the Broncos.

"I just stayed ready," Hobbs said. "He was overplaying me, so I went back door and Rod hit me with a great pass and I was able to finish it."

Jessup has made 25 consecutive free throws and is now shooting 95.8% from the line for the season. He's missed just three free throws all year (68 of 71).

A year after losing a program-record 20 games, the Broncos earned win No. 20. It's the eighth time in 10 seasons under Rice they've reached 20.

And it means they'll get to play at least one more game.

"It's another opportunity to play in a Boise State uniform," Jessup said. "And we're just one game away from playing for a championship, so that's exciting."