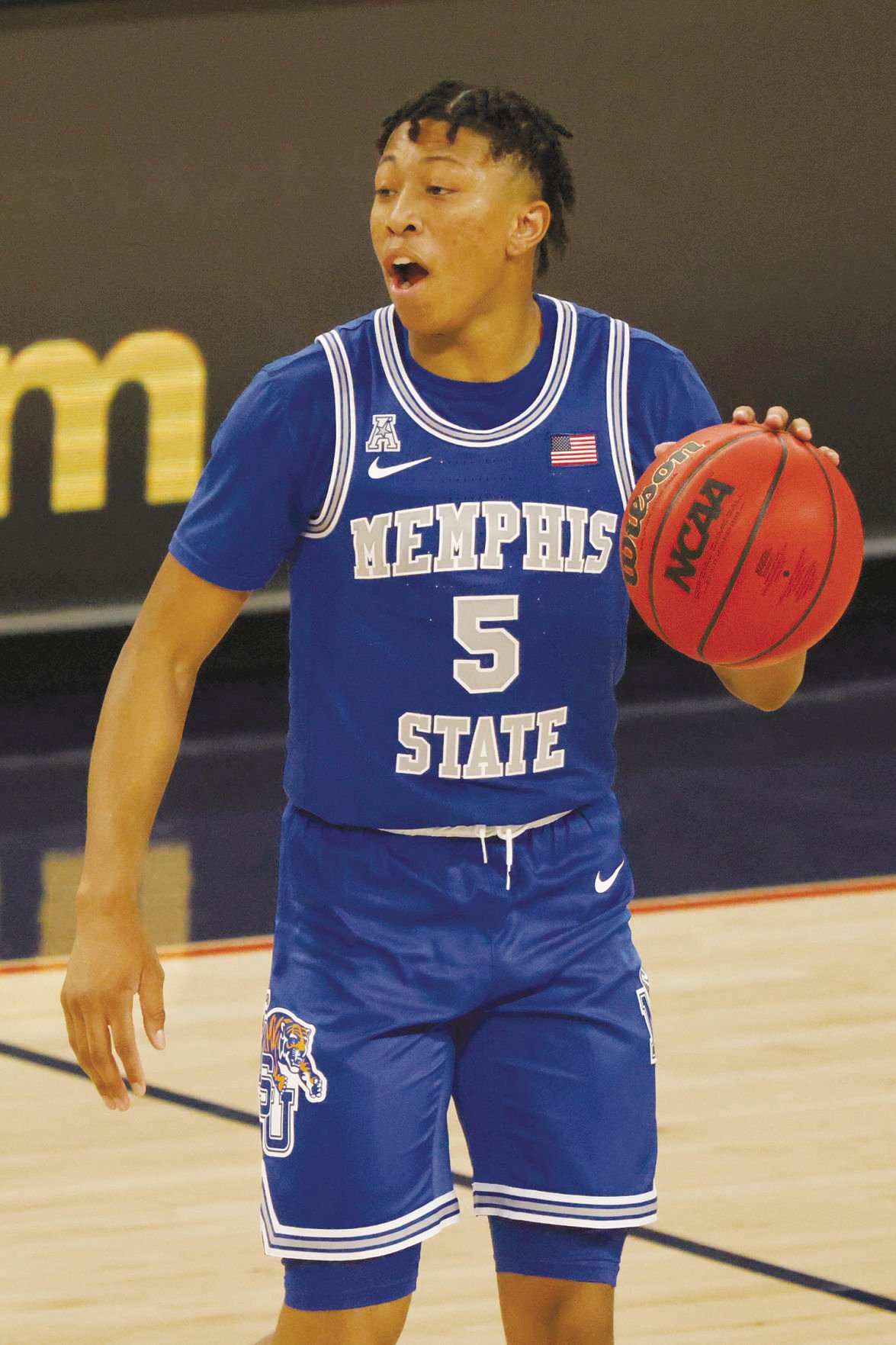 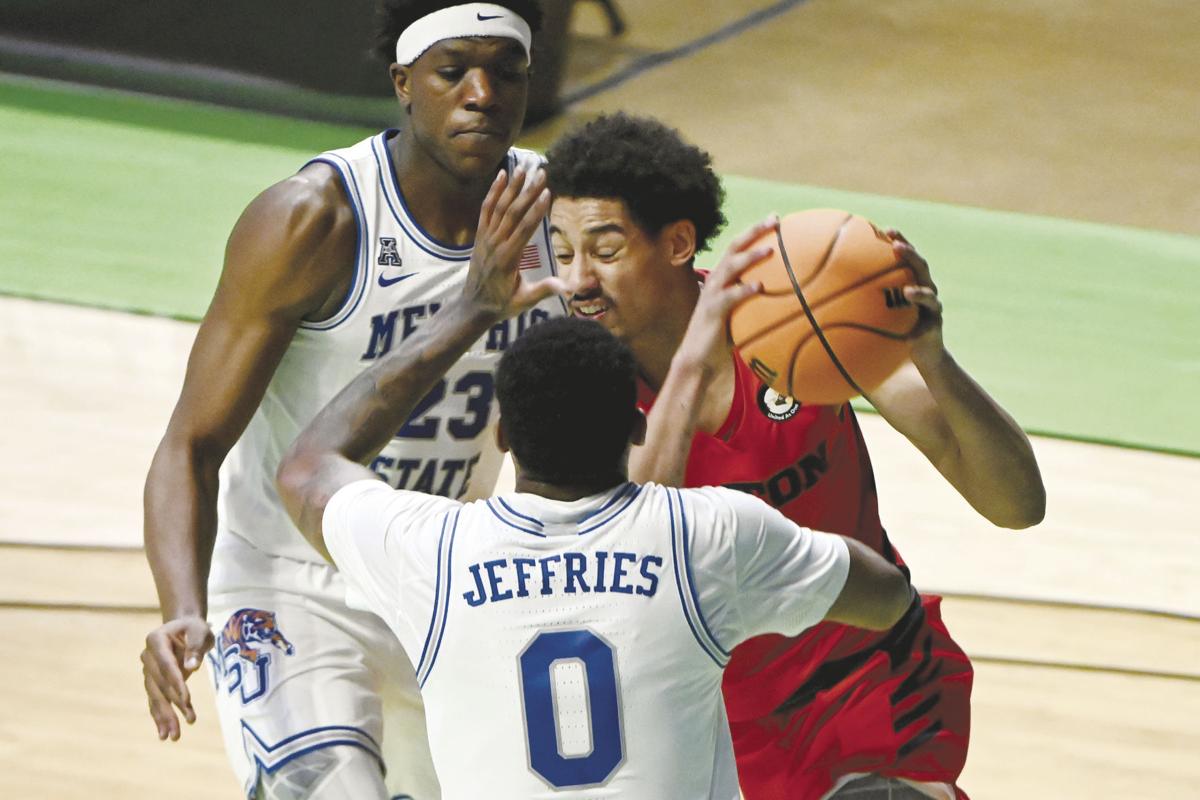 Dayton forward Zimi Nwokeji (12) drives between Memphis center Malcolm Dandridge (23) and forward D.J. Jeffries (0) in the first half in the first round of the NIT Tournament, Saturday in Denton, Texas.

Dayton forward Zimi Nwokeji (12) drives between Memphis center Malcolm Dandridge (23) and forward D.J. Jeffries (0) in the first half in the first round of the NIT Tournament, Saturday in Denton, Texas.

BOISE — One has to go back a long way to find the last time the Boise State men’s basketball team played a team with as much raw talent as the Memphis Tigers.

Former NBA star Penny Hardaway has a loaded roster at Memphis that includes six former top-100 players and nine either four-star or five-star prospects according to ESPN’s recruiting rankings.

The Broncos and top-seeded Tigers will meet Thursday at 7 p.m. on ESPN in the quarterfinals of the NIT.

“They have a lot of talented guys,” Boise State coach Leon Rice conceded.

Memphis is 11-3 in its past 14 games, and two of the losses came to No. 6 Houston by a combined five points. The Tigers lost at Houston, 67-64, on a buzzer-beating 3-pointer from the Cougars on March 7. Six days later Memphis suffered another 76-74 heartbreaking loss to Houston in the semifinals of the American Athletic Conference Tournament.

Had Memphis won either of the matchups with Houston the Cougars likely would have been selected to the NCAA Tournament and not left to be a No. 1 seed in the NIT.

The Tigers defeated No. 4 seed Dayton 71-60 in the opening round last Saturday.

“When you look at them, to me they look like a top-three seed in the NCAA Tournament,” Rice said. “They were close. They came on strong. Their situation was similar to ours in the fact that they had Houston twice in the last week and if they win one of those they are probably in the tournament.

“The first one was won by a half-court shot so that tells you they were right there and the second one was right down to the wire, so that that tells you how good they are.”

The crazy part? Memphis’ best player this season is actually DeAndre Williams, a three-star transfer from Evansville who debuted midway through the season. He’s averaging 11.3 points and 5.8 rebounds in 18 games since becoming eligible in mid-December.

Memphis has a balanced scoring attack with five players averaging between 9.2 and 12.9 points per game.

Memphis makes its money on the defensive end — which is not always the case for a team loaded with blue-chip prospects looking to get to the next level. The Tigers have one of the top defenses in the country, using their length and athleticism to make things tough on opponents.

The Tigers rank near the top of the sport in several KenPom defensive categories including adjusted defensive efficiency (No. 3), effective field goal percentage defense (No. 5) and opponents’ 3-point percentage (No. 2 at just 27.4%).

Memphis also ranks No. 8 nationally in steal percentage at 12.4 and No. 15 in block percentage at 14.0. Only once this season did Memphis give up more than 75 points, and the Tigers rank No. 19 in scoring defense at just 62.8 points allowed per game.

“Man, their defensive numbers are off the charts,” Rice said. “That’s what jumps out at you about them, first and foremost. They are aggressive and they go after you. They’ve played some good teams too and it’s hard because there’s really no way to emulate what they do and how they do it in practice, so you can have a plan but until you go up against those players doing what they do, you aren’t going to get an accurate look at it in practice.”

Asked if putting them on the foul line was a way for the Broncos to win the game, Rice said, “It’s not a strategy like ‘let’s go in and just foul them so they have to shoot 50 free throws. I don’t think we’d survive that. But you never know what the game will tell you to do.”

The Tigers also rank amongst the worst teams nationally in turnovers. Memphis averages 16.0 turnovers per game, which is 321st in the country, and they turn the ball over on 22.1 % of all offensive possessions, which ranks 318th. The Tigers’ non-steal turnover percentage (the times Memphis turns it over when the ball is not stolen by an opponent) is 347th at 13.6%.

The stats and numbers would seemingly say Memphis has the advantage heading into Thursday’s matchup. But as we’ve already seen with upsets in the NCAA Tournament, that’s why the games aren’t played on paper.

“We know they are talented, we know they are long and athletic, but we have some talent too,” Boise State guard Emmanuel Akot said. “The rankings and all that doesn’t matter to us. We’re just excited to go out there and compete.”