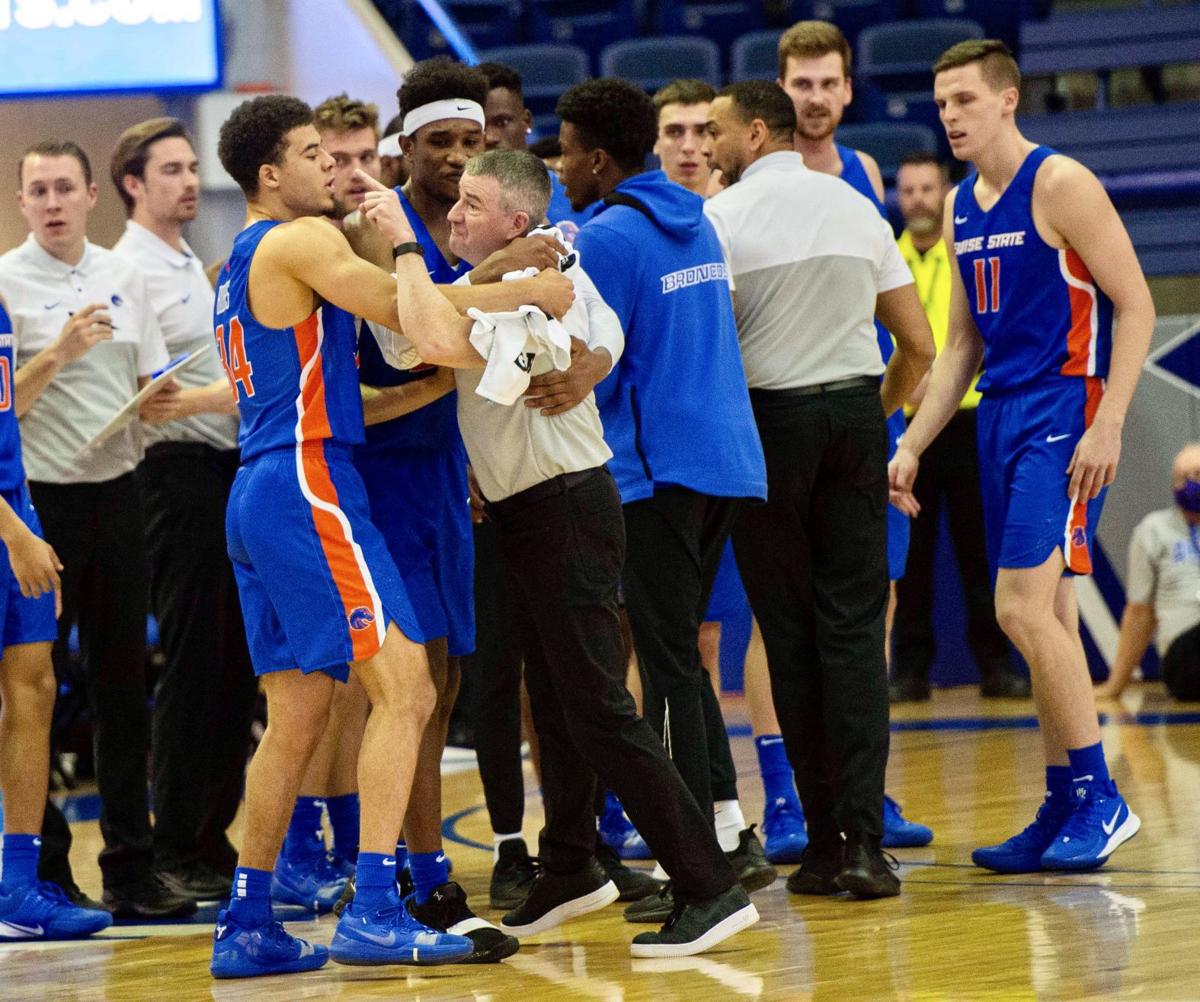 Boise State head coach Leon Rice is restrained by guard Alex Hobbs (34) and Abu Kijab (24) after being ejected during the second half Wednesday at Clune Arena. 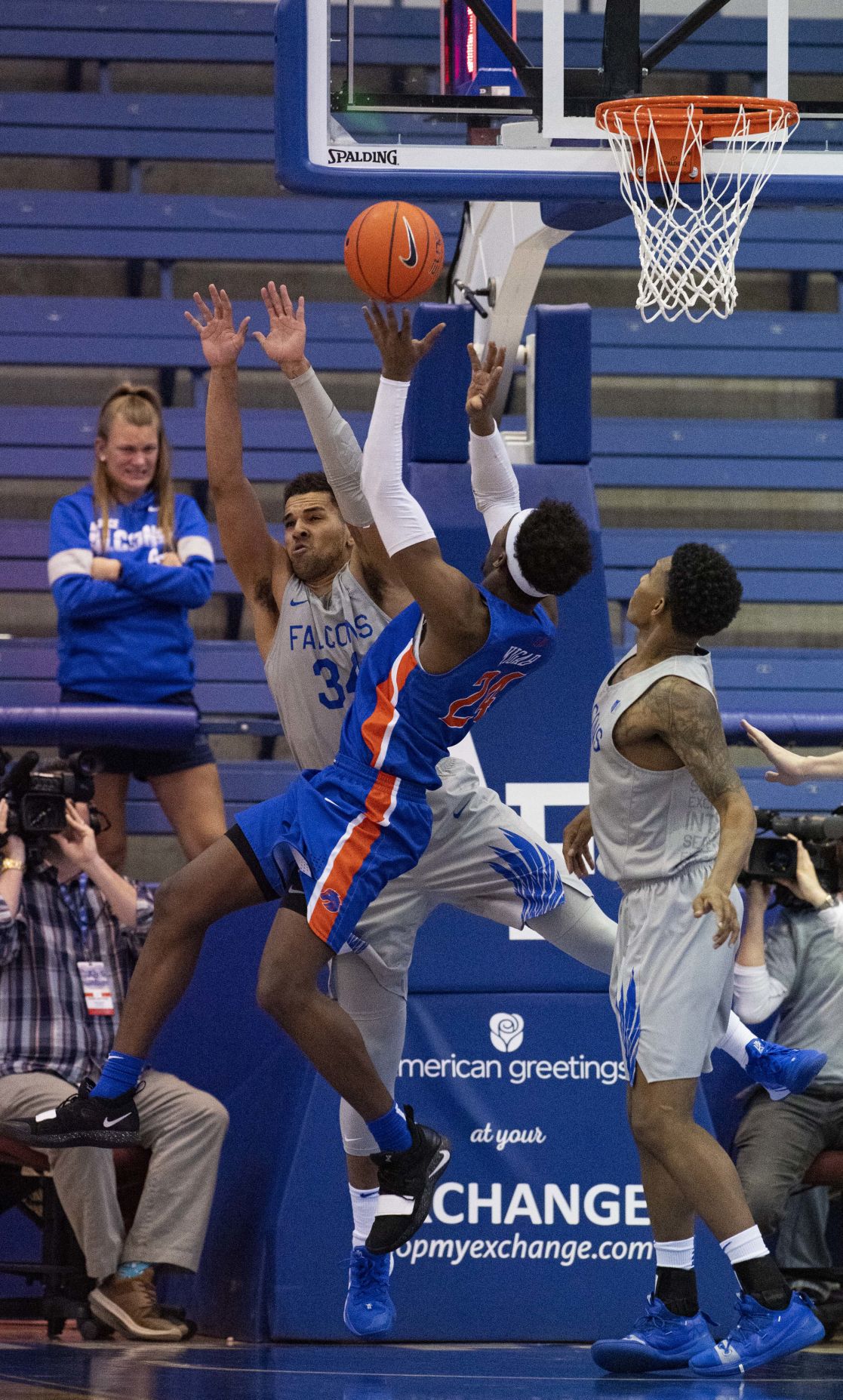 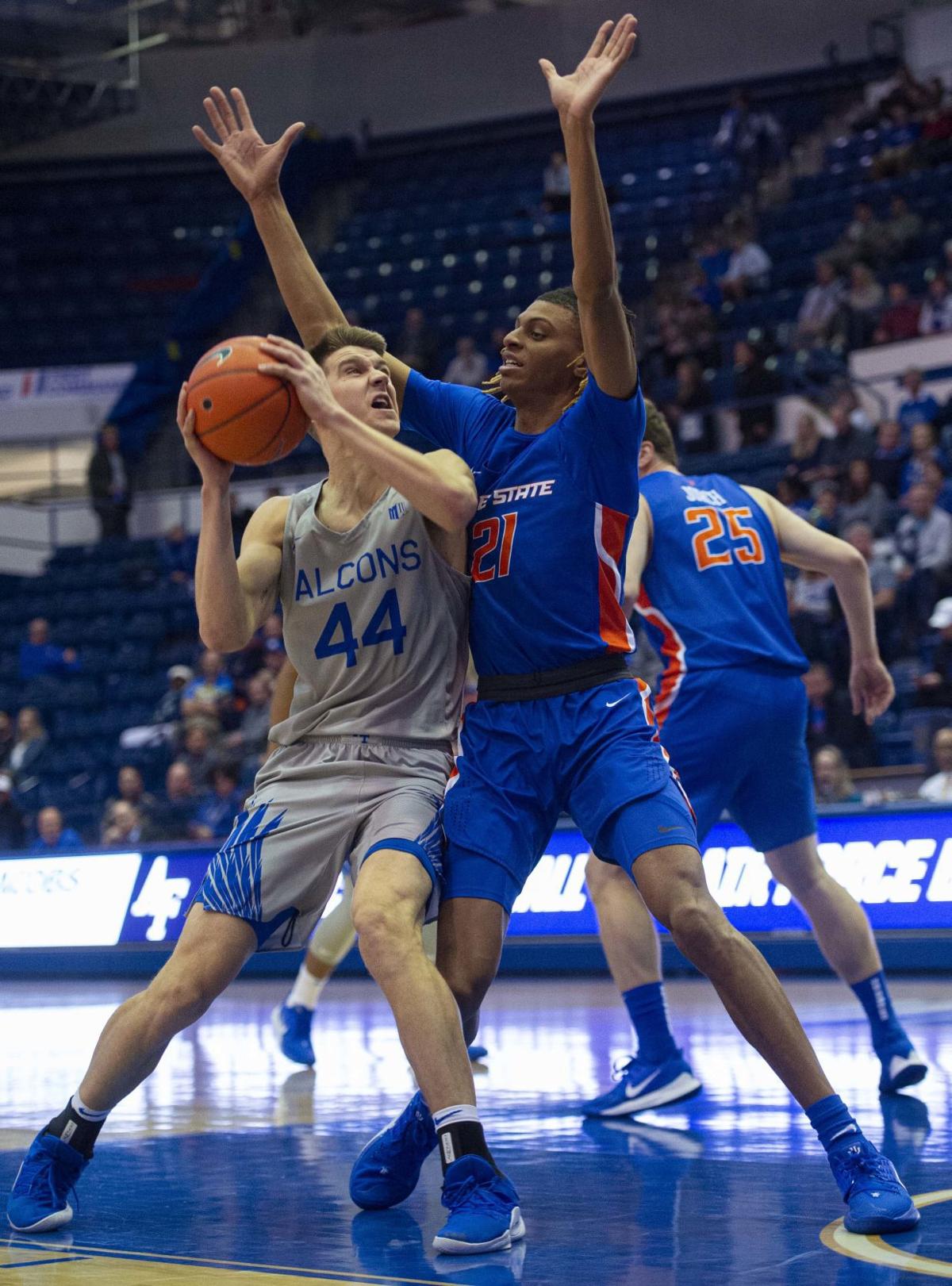 Air Force guard Keaton Van Soelen (44) goes up for a shot against Boise State's Derrick Alston (21) in a game Wednesday.

Boise State head coach Leon Rice is restrained by guard Alex Hobbs (34) and Abu Kijab (24) after being ejected during the second half Wednesday at Clune Arena.

Air Force guard Keaton Van Soelen (44) goes up for a shot against Boise State's Derrick Alston (21) in a game Wednesday.

He was ejected for the first time in his 30-plus years of coaching.

Rice was given two technical fouls and an early exit late in the first half and the Broncos couldn’t overcome a massive free throw disparity in a frustrating 85-78 loss to the Falcons at Clune Arena.

Boise State was called for 23 fouls in the game compared to 12 on Air Force. And the Falcons went 26 for 30 from the free-throw line compared to just 10 of 13 for the Broncos.

“For Leon Rice to get tossed out of a game, it tells you something,” assistant coach Mike Burns said during a postgame radio interview.

Air Force shot 50 percent from the field (27 of 54) to hold off multiple Boise State rallies in the second half. The Broncos got within two points on multiple occasions down the stretch but never were able to tie the game or take the lead.

“We made a run there and unfortunately there were a couple points where we had some open looks that really could have helped us get over the hump,” Burns said. “But at the end of the day, we just weren’t up to the task on the defensive end of the floor in the fashion that we needed to be.”

The Broncos played the second half without Rice, who was ejected with 19.2 seconds left before halftime when his frustration with the officiating boiled over.

The foul margin was 11-2 when Rice had finally seen enough.

Rice approached official Rick Randall during a timeout with 19.2 seconds left and began arguing. As Alston pulled his coach away, Rice said something that triggered Randall into giving him a technical foul.

An angry Rice then turned and charged back towards Randall as Alston, Kigab and Hobbs got between the two. As the players were holding back their arguing coach, official Tony Padilla gave Rice a second technical foul and motioned for him to leave.

Rice eventually turned and walked by himself off the court and back to the locker room, and assistants Tim Duryea and Burns were forced to coach the Broncos the rest of the game.

“It throws a wrench into the operation because we’re not accustomed to it and the kids aren’t accustomed to it,” Burns said. “You don’t want that to happen. I’ve been in that situation before myself as a head coach and it’s a lonely walk back to the dressing room. It was really unfortunate.”

It was the first technical fouls in nearly two years for Rice, who talks often with officials during games but rarely reaches the point where he’s close to getting a technical.

“He does a great job relating to officials and handles himself in the best possible fashion,” Burns said while defending Boise State’s head coach.

Rice was unable to come down to the court for the postgame radio interview due to Mountain West rules for those ejected from a game. The Idaho Press requested a phone interview with Rice, but a team spokesman said he was unavailable.

Making things worse at the time was that the two technicals resulted in four free throws for the Falcons. Boise State had just rallied to cut a 10-point deficit to four at 38-34, but Air Force’s Caleb Morris hit all four free throws to give the Falcons a 42-34 lead at the break.

Air Force finished with a 16-point advantage at the foul line, which made a huge difference in a game that was decided by just seven points.

The Broncos pulled within 50-48 midway through the second half, but missed a shot that would have tied the game. Air Force then scored the next five points to open the lead back up at 55-48, and the Broncos were unable to get it back to one possession the rest of the way.

It was the second straight loss for Boise State, which returns home for a tough matchup with preseason league favorite Utah State at 8 p.m. Saturday at ExtraMile Arena.

“It’s going to be a big challenge but our guys are up to that challenge,” Burns said. “We’ll regroup the next couple of days and coach Rice will get us rallied and ready to go on Saturday.”