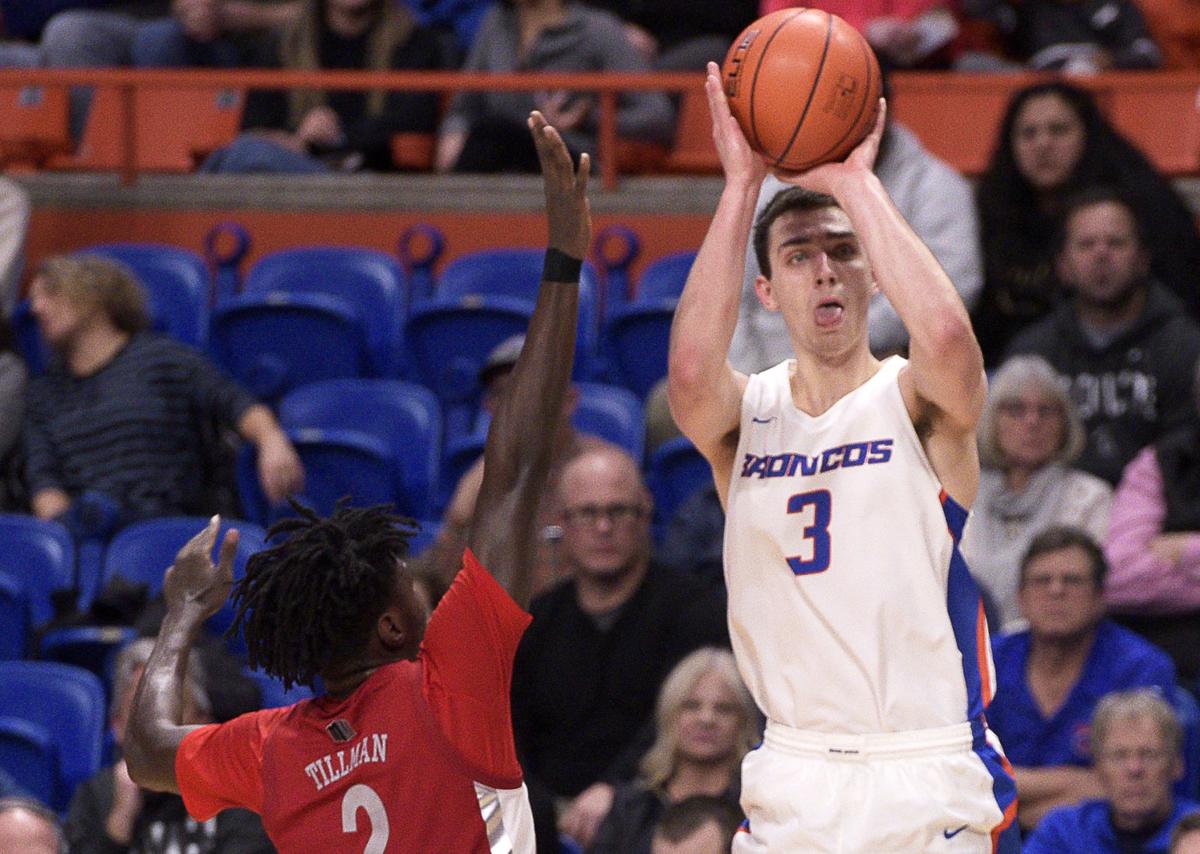 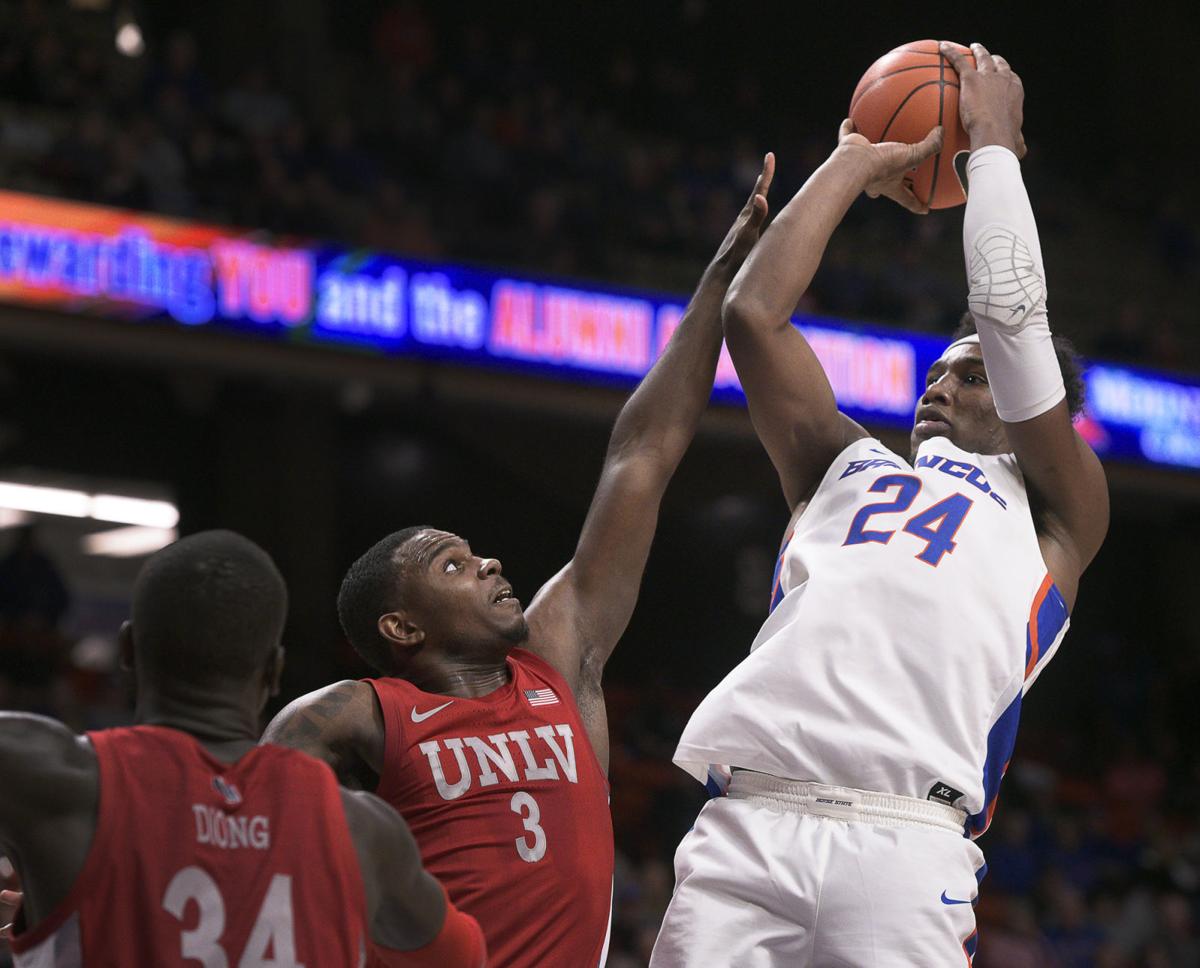 Boise State forward Abu Kigab (24) shoots the ball during the game against UNLV on Wednesday, at ExtraMile Arena in Boise. 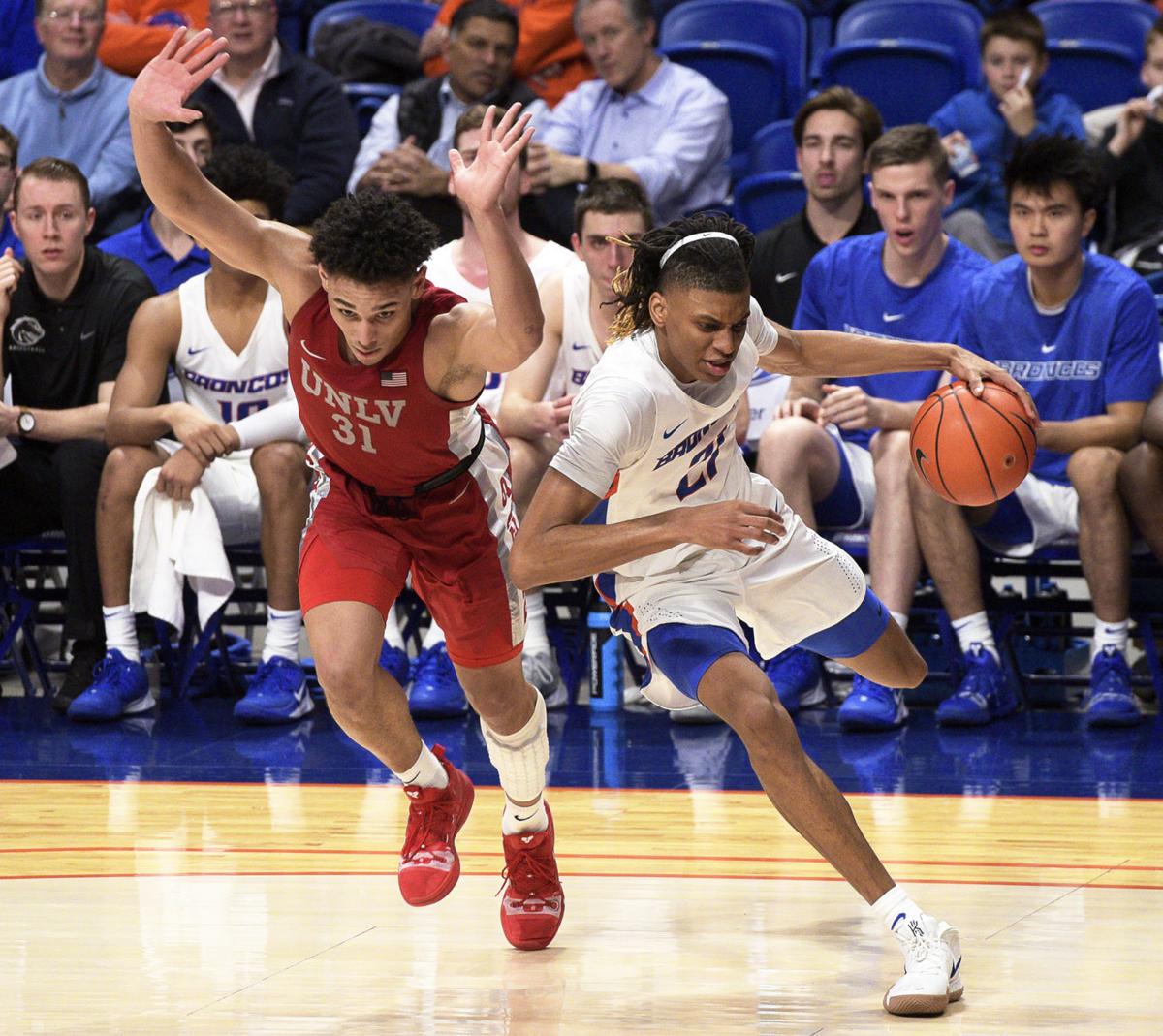 Boise State guard Derrick Alston (21) drives the ball toward the net during the game against UNLV on Wednesday, Jan. 8, 2020, at ExtraMile Arena in Boise.

Boise State forward Abu Kigab (24) shoots the ball during the game against UNLV on Wednesday, at ExtraMile Arena in Boise.

Boise State guard Derrick Alston (21) drives the ball toward the net during the game against UNLV on Wednesday, Jan. 8, 2020, at ExtraMile Arena in Boise.

BOISE — Justinian Jessup made history Wednesday night by becoming Boise State’s all-time 3-point leader, but it was a different shot that most inside ExtraMile Arena will remember most.

The senior connected on a big 3 with 40 seconds left to stem a late UNLV rally and help the Broncos to a 73-66 win.

Jessup made 5 of 6 from 3-point range Wednesday, the first of which moved him past Anthony Drmic and into sole possession of first place on Boise State’s career 3-point list with 276. He made four more and sits at 280 career made 3s, just 16 shy of Jimmer Fredette’s Mountain West record of 296.

“Man I just feel so thankful,” said Jessup, who was surprisingly open about what breaking the record meant to him. “All the credit goes to God and the teammates I’ve had my four years here. That’s why I’m in this position. Shooters aren’t anything without the guys passing to them.”

“Some of the names on that list are amazing players,” Jessup said. “Coby Karl, Drmic obviously, my old coach Roberto (Bergersen), that just plays even a bigger part of it, the guys on that list.”

Derrick Alston had maybe the quietest 26-point, 10-rebound game in school history due to Jessup’s record-breaking night. Alston made 10 of 12 free throws and went 7 for 19 from the field to reach 20 points for the 11th time this season.

Oregon transfer Abu Kigab had 12 points and reached double figures for the sixth time in seven games since becoming eligible.

A crowd of just 4,509 watched Boise State (11-6, 3-2 MW) win for the fifth time in the past six games. The Broncos held UNLV to 37.7 percent shooting to improve to 10-0 this season when holding an opponent below 45 percent from the field.

But the story of the night was Jessup, who entered the game tied with Drmic after making two 3-pointers in a loss at Nevada last Saturday.

Jessup had a hard time finding open space to shoot for much of the first half. He missed his first 3-point attempt midway through the half, and didn’t attempt his second until the record-setter with 40 seconds left.

“I thought the record would stand a little bit longer but he’s a great shooter so I’m not surprised by it at all,” Drmic told the Idaho Press recently. “That’s a lot of 3s but records are meant to be broken and good for him. It shows how much work he’s put into his shot and how good he is at shooting….It’s pretty awesome and I’m happy for him.”

Boise State oddly acknowledged the feat on the video board at halftime, when the Broncos were in the locker room and many fans were at the concession stands.

Jessup is up to 53 triples for the season and is on pace to challenge Abe Jackson’s single-season program record of 92 made 3s. He previously has finished with 90 and 87 the past two seasons.

“If you could have seen our locker room when we talked about it after the game it was pretty cool,” Boise State coach Leon Rice said. “The guys all stormed him when I talked about him and they are really proud of Justinian because he’s so humble. When a guy does that and he’s so humble the rest of the team really takes a lot of pride in it.”

Former Boise State guard Coby Karl, who sits in third place on Boise State’s all-time list, passed along a message to Jessup through the Idaho Press on the accomplishment.

“Thank you for being an example of consistency for our program and showing these young kids that perseverance will pay off,” Karl said. “The one piece of advice I’d give him is shoot more.”

The Broncos went up 33-29 on Jessup’s historic 3, and Alston followed with a 3-pointer of his own as time expired to give the Broncos a 36-31 lead at the break.

Jessup heated up in the second half, hitting a trio of 3-pointers in a span of less than three minutes to open up the Boise State lead to 50-39 with 14:17 to play.

UNLV got within five at 67-62 in the final minute, but Jessup took advantage of a mismatch and hit the game-clinching 3 over the outstretched arms of 6-foot-11 center Cheikh Mbacke Diong as the shot clock was expiring.

Jessup talked more about himself than he typically likes to because of the nature of his accomplishment, but proved his humbleness with a response about the night.

“Really I wanted to win the game most importantly because this was a really big win,” Jessup said. “I hope this doesn’t overshadow that.”

Up next for Boise State is a tough road test at No. 7 San Diego State on Saturday. The Aztecs are one of two undefeated teams left in the country at 16-0.