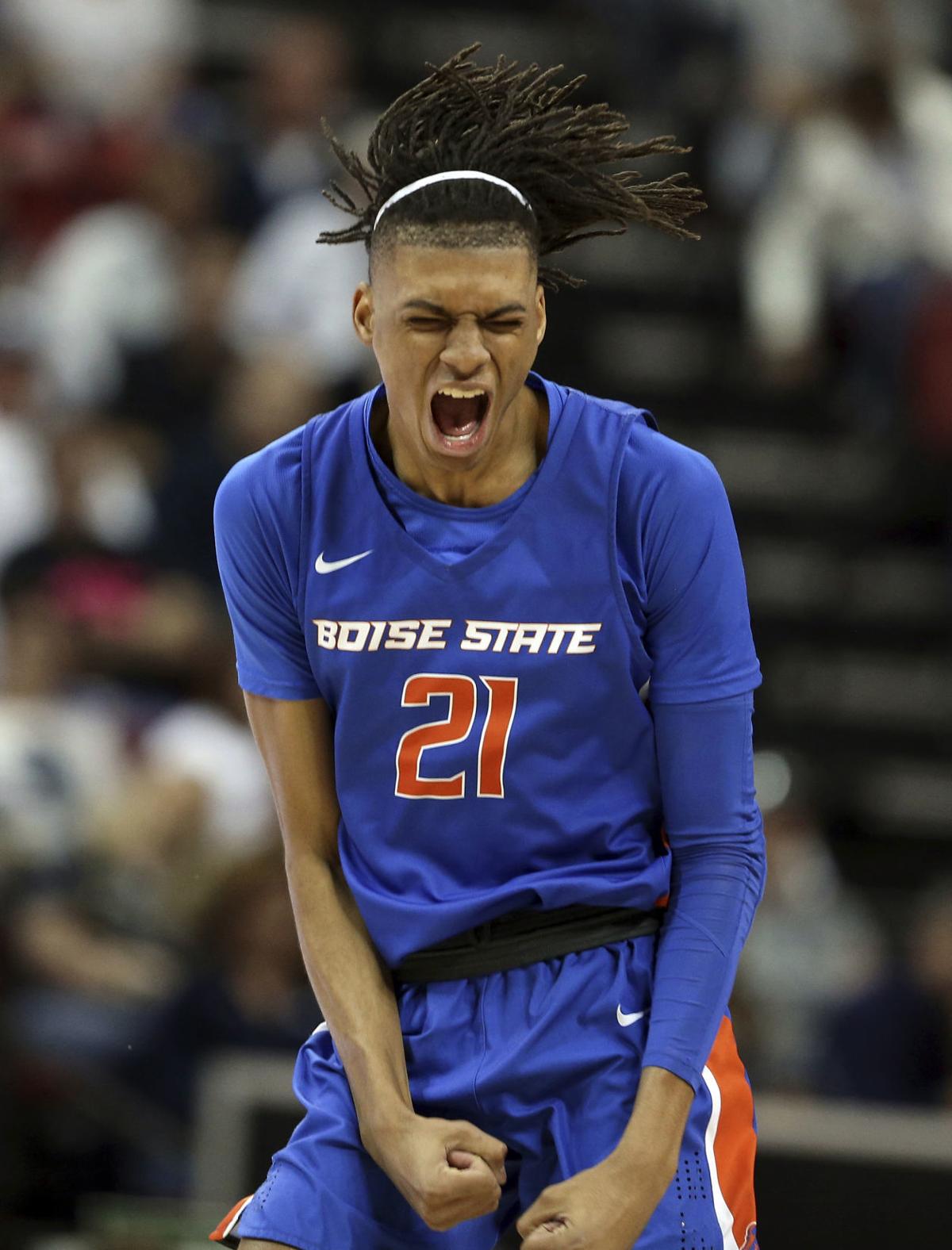 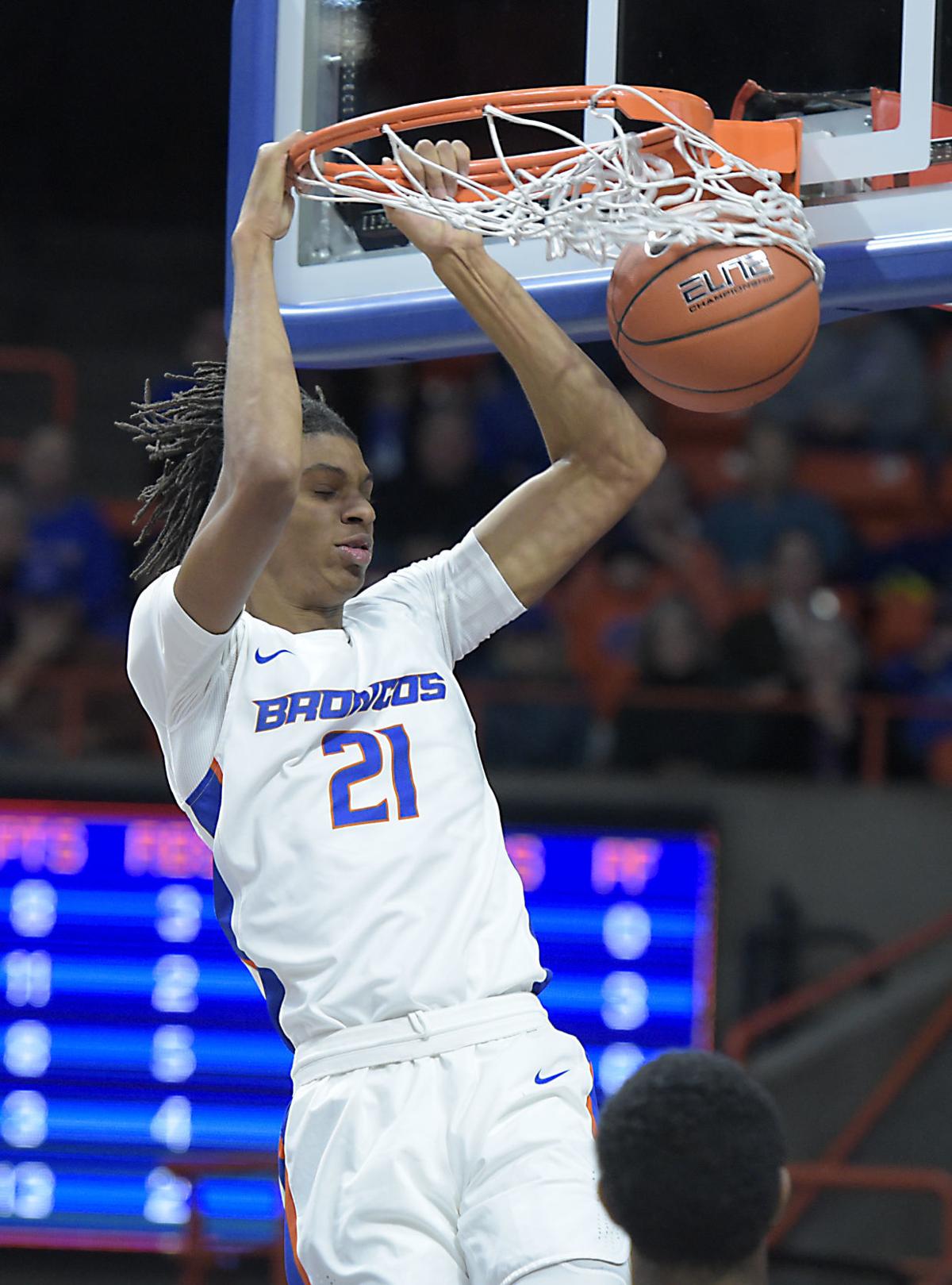 Boise State guard Derrick Alston (21) slams down a dunk during a game Dec. 8, 2018, against Central Washington. 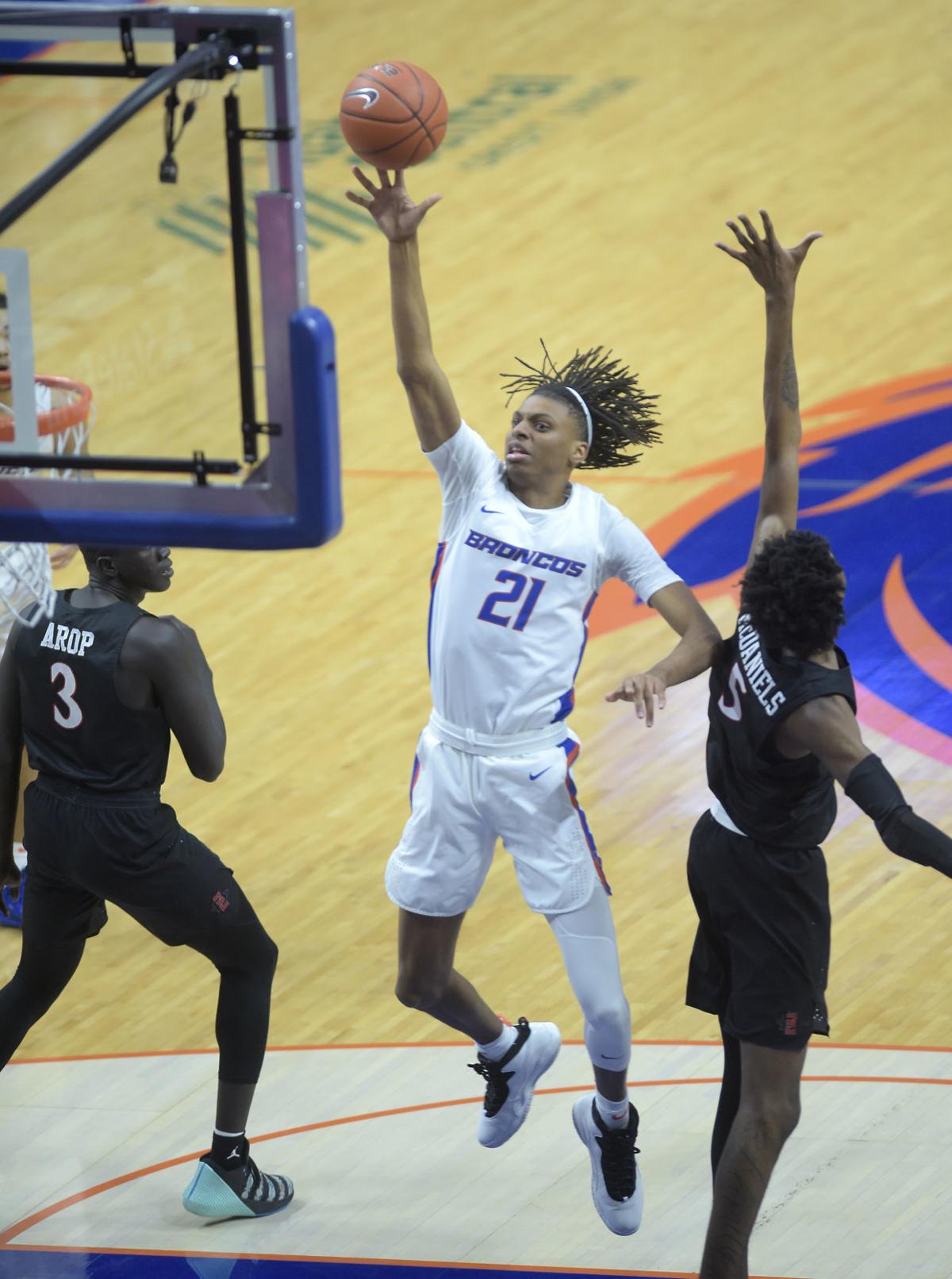 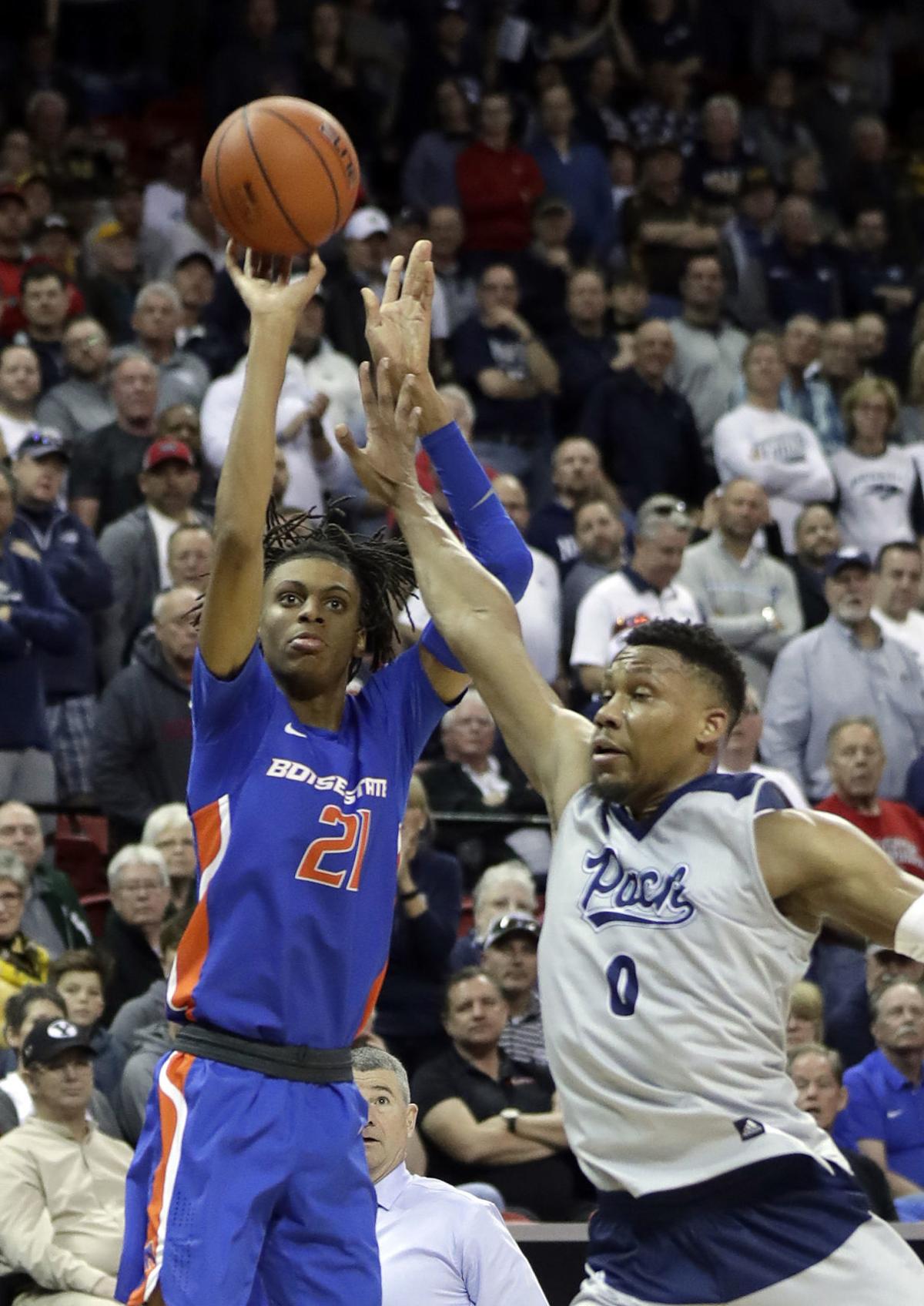 Boise State guard Derrick Alston (21) slams down a dunk during a game Dec. 8, 2018, against Central Washington.

BOISE — There is no real way to accurately explain the jump Boise State forward Derrick Alston Jr. made last season.

As a redshirt freshman two years ago, Alston was a skinny walk-on that saw action only in garbage time. He played just 26 total minutes over 11 games and scored seven points. He made three baskets all season.

A year later? Alston scored 20 points at least nine times, surpassed 30 points twice and finished as Boise State’s second-leading scorer at 13.4 points per game. His increase of 12.8 points per game from the 0.6 he averaged as a freshman was the biggest jump in school history, and the second-largest in the country last year.

“It was amazing,” Boise State coach Leon Rice said. “We didn’t know what we had.”

In barely a year’s time the 6-foot-9 Alston has gone from a no-name guy on the end of the bench to an NBA prospect. In a year or two he could follow Chandler Hutchison as the second player drafted from Boise State since 2018.

“It’s a whole 180 from last year,” Alston admits about the outlook of his basketball future. “I’m just thankful for the coaches and my teammates for giving me the opportunity to just be part of the team. The years before I was watching on the sidelines and helping other guys get ready to play. Now being in this position and being able to step in and be more of a leader and have this opportunity, it’s just something I’m very thankful for.”

Alston’s father, also named Derrick, was the No. 33 overall pick by the Philadelphia 76ers in the 1994 NBA Draft, and he played 18 years professionally both in the NBA and overseas. He’s currently the head coach of the Westchester Knicks of the NBA Developmental League.

The younger Alston put up solid numbers but nothing crazy at Strake Jesuit High School in Houston, Texas. As a senior he averaged 14.6 points and 5.1 rebounds per game and was named first-team all-district. He was honorable mention all-district as a junior.

“He said, you’re really going to like this kid. The only thing he’s missing is strength and weight,” Rice recalled. “I was like well, yeah, he turned sideways and you couldn’t see him. I mean he was that thin. It was unreal. But he had such a good feel for the game. It’s the highest level and pretty unique for a guy that big and skilled.”

The Broncos saw potential with Alston, so they invited him to join the team as a walk-on. The first order of business? Adding some meat to his bones.

“When we got him he was 6-9, 148 pounds,” said Rice, who jokingly added “there was a safety issue putting him out there.”

Alston redshirted during the 2016-17 season and was up to 170 pounds before playing sparingly two years ago as a redshirt freshman. By the time last season started, he had added another 15 pounds to get to 185.

Quietly, Rice and his staff expected big things from Alston last season. During his redshirt freshman year NBA scouts would come to watch Hutchison during practice, and they’d ask the coaches about No. 21. It was Alston, who had an intriguing NBA-type body but had yet to actually show anything on the court.

That changed last offseason when Hutchison departed for the NBA and Alston began taking over pickup games and summer workouts. He did enough to earn a starting spot to begin the year, and it didn’t take long to realize the Broncos just might have something.

Alston had nine points and seven rebounds while playing 35 minutes against Idaho State, scoring more points in the season opener than he had in the entire previous year. He followed that up with 14 points against Jackson State, 11 against Creighton and 22 against St. Bonaventure.

Against San Diego State in January, Alston scored 30 points — yes 30 points in one game for a guy that scored seven all of the previous year — to lead the Broncos to an 84-66 blowout win.

“That San Diego State game definitely was like a wake-up call for everybody I’m sure,” Jessup said. “He just continued to improve throughout the whole year and really found his role within the offense. It was awesome to see.”

Alston went on to set a career high with 33 points against San Jose State, making him the second underclassman in school history to have at least two 30-point games in the same season.

He scored at least 20 points in five of the last seven games of the season, including 21 in a tough loss to Nevada in the quarterfinals of the Mountain West Tournament.

And he did it in different ways. He finished second on the team with 56 made 3-pointers (he shot a solid 38.4 percent from deep on 116 attempts), but also showed off an ability to drive and score inside. He led the team with 26 dunks — and many of them were thunderous.

An underrated part of his game? He finished third in the Mountain West at the free-throw line with an 81.9 percent (95 of 116) average.

“He was behind Chandler but it’s just a testament to what we believe in, grinding and hard work and player development — day in and day out getting better and working at it,” Rice said. “And that hasn’t changed. We’re still on him about that. We’re trying to make him take that next jump. If he makes that next jump? Wow.”

Hutchison made a similar jump in production, but his came from his sophomore to junior seasons. Alston did it from his redshirt freshman to sophomore year, which is why those around him can’t wait to see what the future holds.

“I think the sky is the limit for him,” teammate Alex Hobbs said. “I think he can make another big jump.”

A big key this year for Alston? Consistency. He followed up the 33-point game against San Jose State with just two points in a loss to Fresno State. After scoring 24 points against Air Force, he had just five points in the next game. He had 22 points against Utah State and then five against Colorado State.

“When guys first start becoming ‘that guy’, there’s a lot more ups and downs,” Rice said. “Now I think you’re going to see a lot more consistency out of him to where night in, night out, you can count on 15 to 18 points. … We’re seeing that consistency every day in practice and hopefully that translates over into the games. I think it will.”

The Broncos have also seen a more vocal Alston. In a recent practice he spoke up and criticized a teammate in front of the whole team for not running a conditioning drill with maximum effort at the end of practice. The player, and his group, ran the drill again.

“It’s just an accountability thing and holding guys accountable,” said Alston, who last weighed in at 188 pounds in August. “I think that’s maybe what we were missing some last year, everybody not holding each other accountable and making sure we set that bar and everyone is meeting it.”

Last year the Broncos badly missed a vocal leader that could lead by example both on and off the court. Alston appears to be sliding into that spot. Said Rice of the practice incident, “You have to tell each other what you need to hear and not what you want to hear, and that was a great example of that.”

It could be a special year for Alston as he steps into the spotlight for a more prominent role. But he won’t surprise anybody this time around, and he’s saddled with high expectations to help the Broncos rebound from last year’s 20-loss campaign.

But Alston says bring it on. He’s ready for it all.

“I feel like I’m just scratching the surface of how good I can be,” Alston said. “The coaches have been helping me out and finding different ways to get better. I’ve put in a lot of work this summer and fall to get ready for this year, and I’m just excited to show people that.”

Boise State hosts West Coast Baptist on Oct. 31 at 7 p.m. at ExtraMile in an exhibition game. The regular season opener is Nov. 5 at home against Life Pacific.