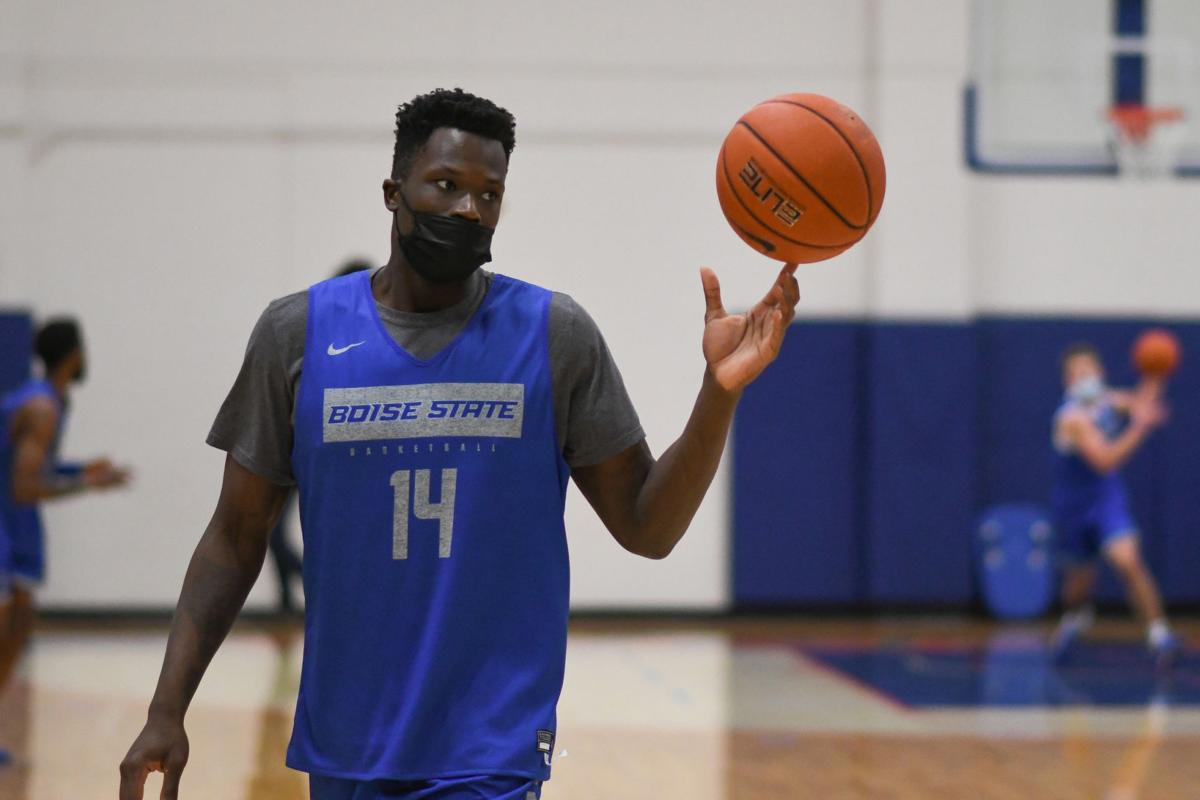 Boise State guard Emmanuel Akot waits for his chance during a drill in practice on Tuesday at Boise State University. 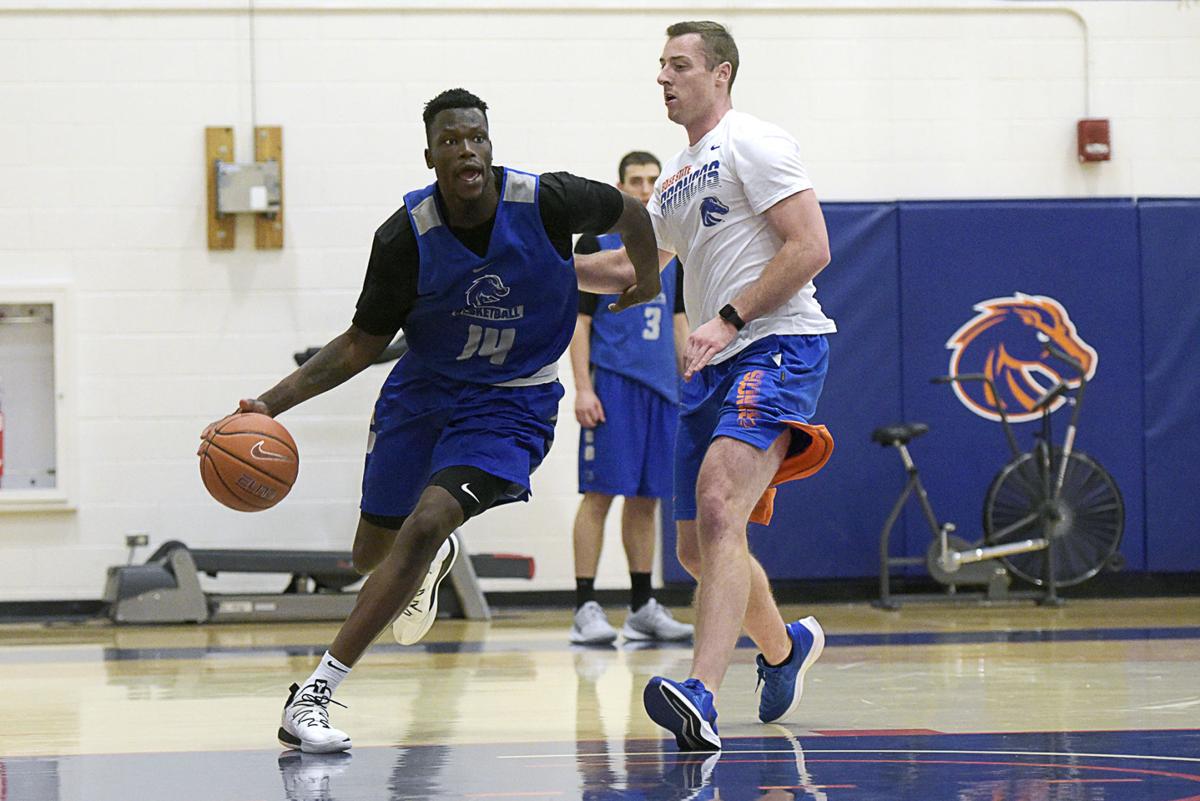 Boise State guard Emmanuel Akot waits for his chance during a drill in practice on Tuesday at Boise State University.

BOISE — Boise State forward Abu Kigab has never been on a team where the point guard was taller than him.

“Never,” Kigab said with a laugh. “It’s going to be fun. You don’t see that often, but usually when you do it’s something very special.”

Just how loaded are the Broncos this year? The primary ball handler could be 6-foot-8 Emmanuel Akot, a redshirt junior who is set to make his Boise State debut after sitting out last season following a transfer from the University of Arizona.

There is probably not another newcomer on the roster with more hype than Akot, who at No. 24 overall in the 2017 recruiting rankings from 247Sports is believed to be the highest-ranked recruit ever to play at Boise State in any sport.

The former five-star prospect joined the Broncos after two seasons at Arizona, but he sat out last season due to NCAA transfer rules. He’s a long, athletic guard similar in some ways to Derrick Alston Jr. And he figures to make an immediate impact when the Broncos open the season next week.

“The one thing I love about him is when you have those big guards that have the versatility to play four different positions, that makes them harder to guard,” Boise State coach Leon Rice said. “That’s what I’ve seen with him. And now I have two of those guys with that kind of size and athleticism.

“He’s really developed as an offensive player in the last 12 months. He’s shooting the ball at a high level right now and he distributes it. He’s kind of a jack of all trades guy because he can score inside, outside, midrange. He gives us the versatility when you can have him and DA. That makes us hard to guard.”

Akot played in 48 games for Arizona before electing to transfer in January 2019, midway through his sophomore year. He made 15 career starts and was a key contributor for the Wildcats, but saw his role start to diminish and wanted to find a better fit.

He found that in Boise, where his friend and former Canadian National Team teammate Abu Kigab had just transferred to Boise State from Oregon.

“That helped with my decision,” Akot said. “We talked and he told me how great it was here.”

Akot finished the academic semester at Arizona before joining Boise State in the summer of 2019. He believed, as did Boise State’s coaches, that he had a strong case for a waiver to be eligible right away last season.

An FBI investigation into the college basketball bribery scandal led to one Arizona assistant coach spending time in a federal prison. Another assistant coach was fired and a third was accused of wrongdoing.

But the NCAA didn’t see it the same way and ruled Akot didn’t meet the criteria to earn immediate eligibility. He was allowed to practice, but couldn’t play in games last season.

“I was pretty surprised,” Akot said. “But at the end of the day it happened and it’s in the past now. I’m looking ahead. Honestly it really benefited me to sit out and develop my game and work on things that weren’t a strength for me.”

Akot was down at first. And who wouldn’t be after finding out it would be another 12 months before being able to take the court. But Akot put his head down and went to work, choosing to try and make the most of the situation.

“Would we have loved to have him last year? Heck yeah. Absolutely,” Rice said. “But he did a great job with the hand he was dealt and he took it upon himself and committed to his development and it’s showing up now. I was really proud of him. It was hard for me to handle, I struggled with it, and I’m sure it was 100 times harder for him. It was tough on everyone but he’s been awesome.

“For a guy that had to sit out a year to have that great of an attitude after what he went through, it’s a credit to his character. He’s been doing his work in the dark and he’s raring to go, I know that.”

Akot won’t be the best pure shooter on the team, but he figures to impact the game in a number of ways due to his versatility. The word that keeps coming up when talking to his coaches and teammates about him? Playmaker.

“I’m a tall guard that likes to pass the ball, but I can also score and create shots in different ways,” Akot said. “And now I think I have more of a feel for the game with distributing the ball and dribbling and making decisions.

“I’m just excited. After being out almost two years and redshirting, finally the work will hopefully pay off. It’s been good to get all that stress behind me and now I know I get to play and it’s going to be amazing.”

Boise State has arguably the most talented roster in school history, so the Broncos have had to get creative in practice to find ways to get the best five players on the court. Scorer Marcus Shaver is a better fit off the ball, while Alston and Kigab will play on the wings. East Tennessee State 6-10 transfer Mladen Armus will start at center.

That means the best fit for Akot is at point guard, which gives the Broncos four starters standing 6-7 or taller.

“It makes us a very versatile team,” Kigab said. “Emmanuel is a great scorer and a great playmaker and I’m very confident when he has the ball in his hands. Especially with other point guards guarding him we can get him in the post and create mismatches. He can create for others because he’s a great passer. He brings a playmaking skillset and can do it all offensively.”

Having a player like Akot suit up for the Broncos is not something that happens every day. But while Akot said he’s aware of the hype and high expectations coming from the outside, he’ll be focused on one thing when he takes the court next week in Houston: Winning.

“I can feel the energy and I know the Boise State fans want me here,” Akot said. “But at the end of the day that is not something I am worried about. I want to win championships and be the best teammate I can be.

“I have aspirations of being an NBA player and you make the NBA when you win, so hopefully we can win a lot.”

With Akot in the fold, the Broncos have a chance to do just that.