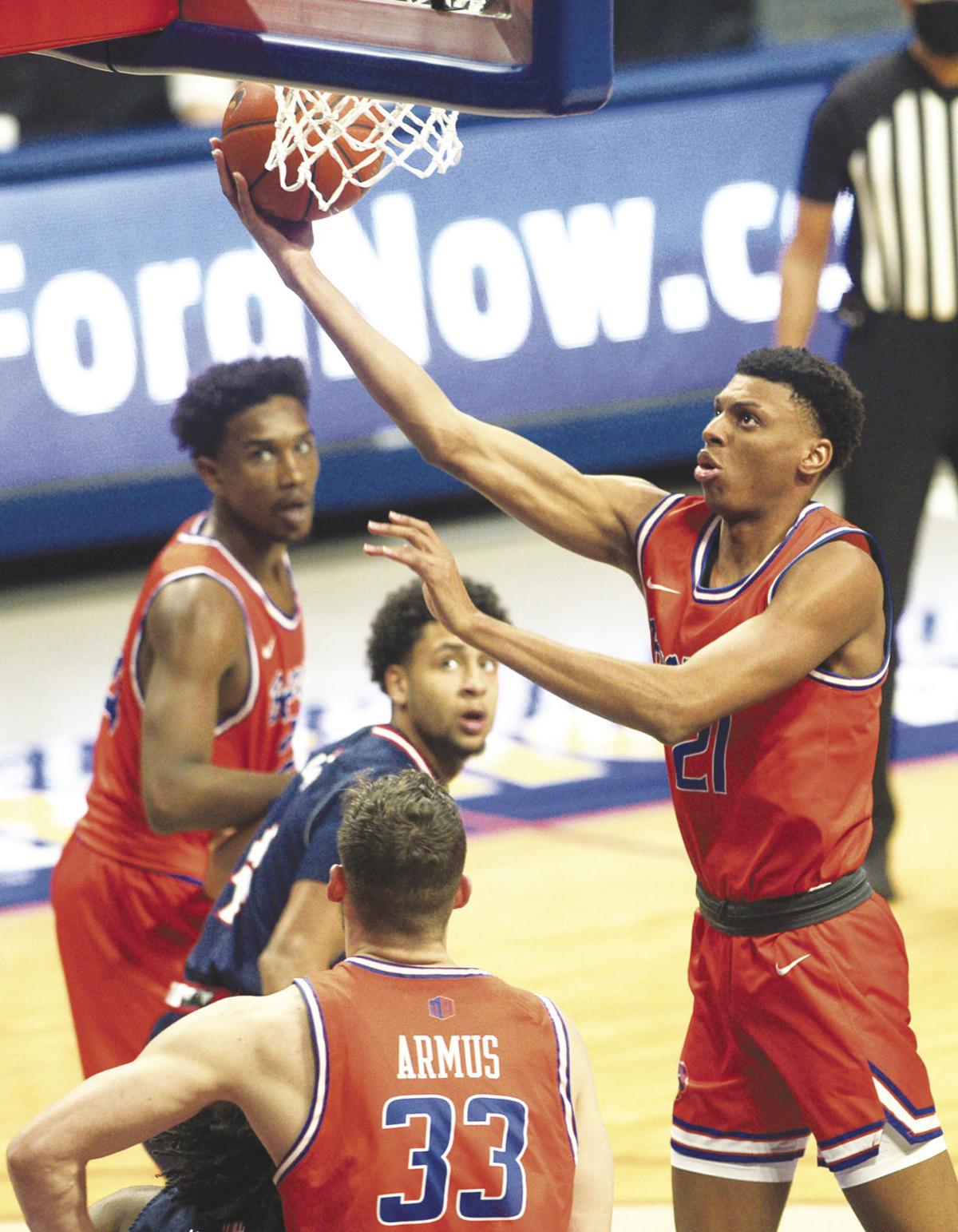 Boise State guard Derrick Alston, Jr. (21) goes in for a layup during the game against Fresno State at ExtraMile Arena on March 2. 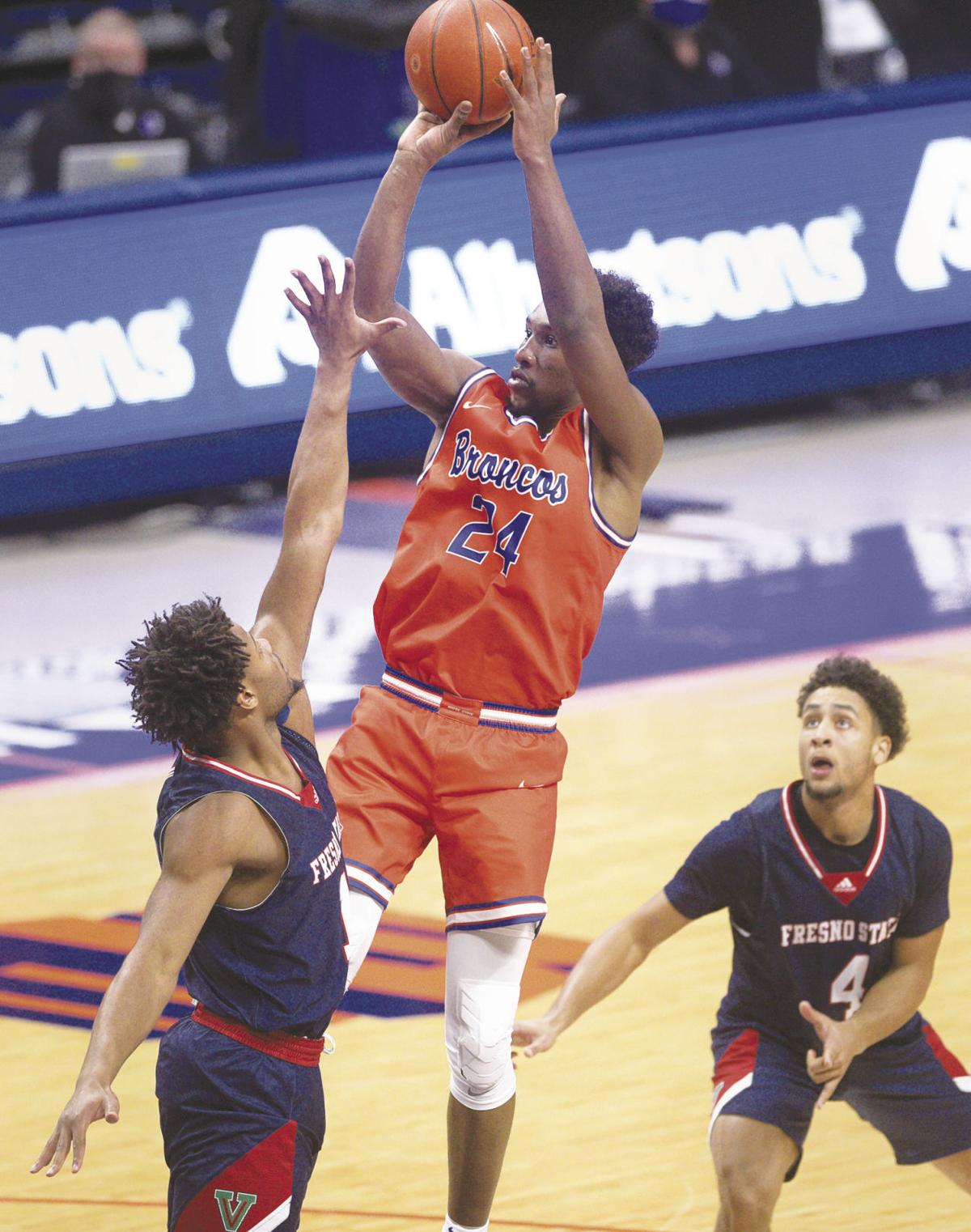 Boise State forward Abu Kigab (24) shoots the ball during the game against Fresno State at ExtraMile Arena on Tuesday in Boise. 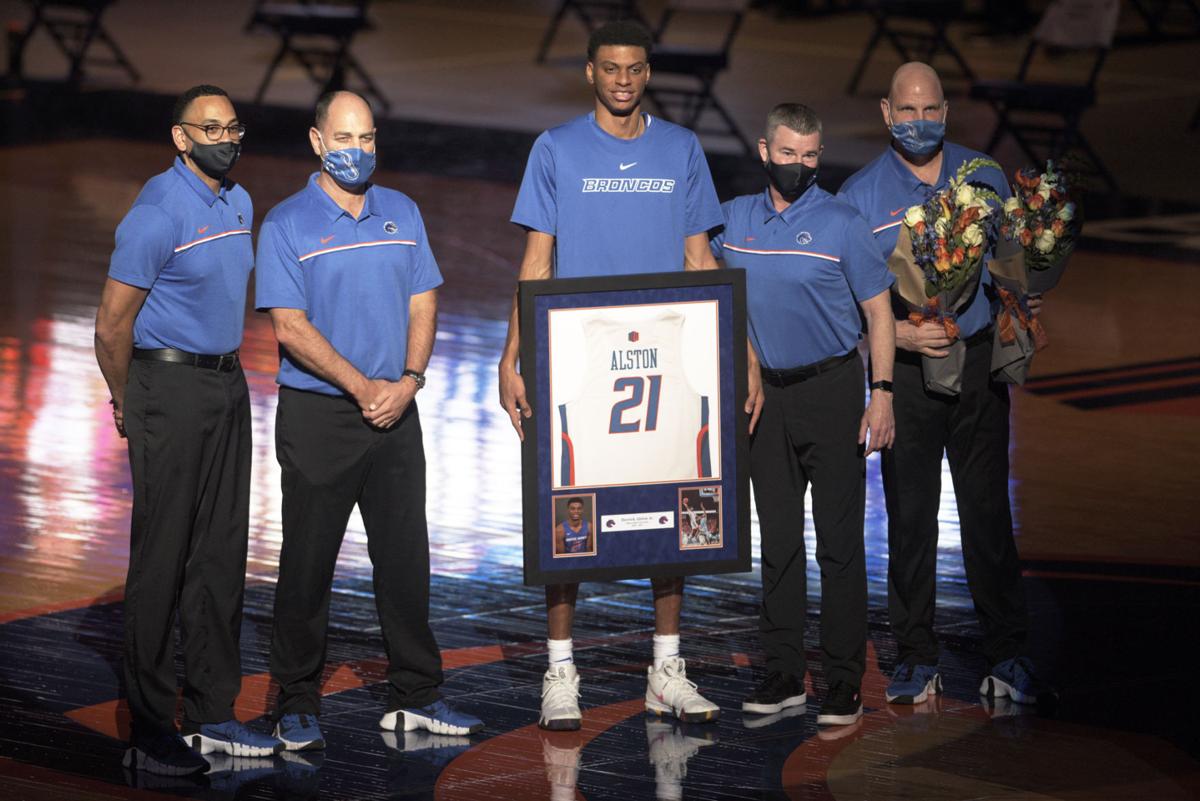 Boise State guard Derrick Alston, Jr. (21) goes in for a layup during the game against Fresno State at ExtraMile Arena on March 2.

Boise State forward Abu Kigab (24) shoots the ball during the game against Fresno State at ExtraMile Arena on Tuesday in Boise.

BOISE — For Boise State fans, it was an all too familiar result — an inexcusable, heartbreaking loss in March.

The only positive, if there is one? It didn’t come in the Mountain West Tournament.

Faced with a no-win situation — a makeup game with a team outside the top 200 in the NET — the Broncos took the worst possible result: a stunning, near-embarrassing loss that could cost them a spot in the NCAA Tournament.

A near-lock to qualify for the Big Dance just a week ago, the Broncos now likely will be headed to the NIT if they can’t find a way to win three games at the conference tournament in Las Vegas next week.

“Right now it feels devastating,” a soft-spoken Boise State coach Leon Rice said. “My guys are devastated right now. You get what you work for and I think Fresno outworked us with some things tonight.”

Boise State led 63-54 with 5:01 left. After a rough start it seemed like the Broncos would survive.

But Fresno State (11-10, 9-10 MW) caught fire, hitting two huge 3-pointers and ending the game on a 13-1 run to storm back for a three-point win. Boise State missed its last eight shots, including a desperation 3-pointer from Emmanuel Akot at the buzzer, that would have tied the game.

“We got the lead there and they got stop after stop and we settled for jump shots,” Rice said. “They were the tougher team. ... It takes grit and toughness to win those close games and they kind of out-toughed us there mentally and physically.”

In the first meeting on Jan. 20, Boise State trailed 46-43 with 10:51 left before ending the game on a 30-5 run to pull away for a 73-51 win. The two teams were supposed to play again two days later, but the game was postponed due to what turned out to be a false positive COVID-19 test just hours before tipoff.

The makeup game really didn’t mean much for the league race and also wouldn’t help the Broncos much had they won. But the league elected to have it be one of the games made up this week to try and salvage some TV money.

And the no-win situation backfired for the Mountain West and the Broncos with Tuesday’s stunning result, potentially costing the league a spot in the NCAA Tournament — and millions of additional money in revenue.

Akot had 18 points to lead the Broncos, but Derrick Alston Jr. had just 12 points on 4-of-16 shooting in a forgettable Senior Night.

It was even worse for senior Abu Kigab, who suffered a significant shoulder injury late in the second half on a hard fall to the floor. Kigab returned to the bench with a big brace and sling on his right shoulder but figures to miss significant time — potentially the rest of the season.

“That shoulder was out,” Rice said. “That was a tough one. I feel awful for him. I haven’t got the prognosis yet but I’m praying for him. It didn’t look good.”

Rice said the injury “definitely affected things” for the Broncos down the stretch — both from an emotional and physical standpoint. Kigab was starting to produce offensively and is one of the emotional leaders of the team.

Boise State trailed by 12 points in the first half and by 10 early in the second half before starting an impressive turnaround. The Broncos used a 21-4 run over about eight minutes to lead 54-47 with 8:52 left.

After Fresno State rallied to pull within one at 55-54, Alston scored eight straight points to push the Boise State lead to nine at 63-54 with 5:01 left. All appeared right in the world and it looked like Boise State would hang on.

Fresno State had different plans. The Bulldogs, who entered shooting just 31 percent from 3-point range in conference play but hit 10 of 23 from deep on Tuesday, stormed back with 10 straight points to lead 64-63 with 1:51 left.

Akot hit one of two free throws with 1:34 left to tie the game, but Isaiah Hill nailed a long 3-pointer from the top of the key to put the Bulldogs back in front 67-64 with 1:10 left.

Alston took a bad 3-point attempt from well beyond the line and missed, but Fresno State’s Orlando Robinson missed a shot with 19 seconds left to give the Broncos a final chance.

Akot dribbled the ball around the top of the key and found nobody open, and his last-second heave from the corner air balled as time expired. Fresno State celebrated an impressive win, while the Broncos stood on the court in disbelief.

Boise State had a timeout available but choose not to use it during the chaotic final possession.

“In a scattered court you usually can get some good ones but we probably should have shot the first one and we were just a little hesitant,” Rice said. “You usually can get a little better shot than if they have time to regroup their defense but in hindsight, yeah, I would have loved to take (the timeout).

“You have to dance with the ones that brought you and those are the guys we had in there. We just didn’t get it done.”

The loss was the third in a row for the Broncos following a pair of close losses at No. 22 San Diego State. Once considered the best team in program history, Boise State now faces the real possibility of missing the NCAA Tournament.

Boise State didn’t make any players available to the media after the loss — the first time this season it declined to provide at least one player for interviews.

“This has been a tough six days for us,” Rice said. “We lost the two heartbreakers there and we lost a heartbreaker today. These guys wanted it. They probably wanted it too bad and it probably affected the outcome.”

Social media was predictably full of criticism and frustration after the game, but even the most optimistic Boise State fan had little ammunition to fire back at the detractors. Boise State’s struggles in March continued, as they dropped to 20-23 under Rice in the most important month of the season.

There’s still a chance for the Broncos to rewrite the season’s story. But it will likely take wins against Nevada and San Diego State (teams they are a combined 0-4 against this season) just to get them back in the conversation.

ESPN’s Joe Lunardi dropped the Broncos out of the field in his latest bracket projection Tuesday night. He lists them as the ‘first team out’ of the 68-team field.

Winning the tournament seems like the only realistic way at this point for the Broncos to make the NCAA Tournament. But the Broncos have struggled there under Rice too, going 6-10 in conference tournament games under the 11th-year coach.

The season is not over yet. And that’s maybe the only positive from Tuesday.

“We need a couple days to get away from it and get our minds right and regroup for the tournament,” Rice said.

At this point, that’s all they can try and do.