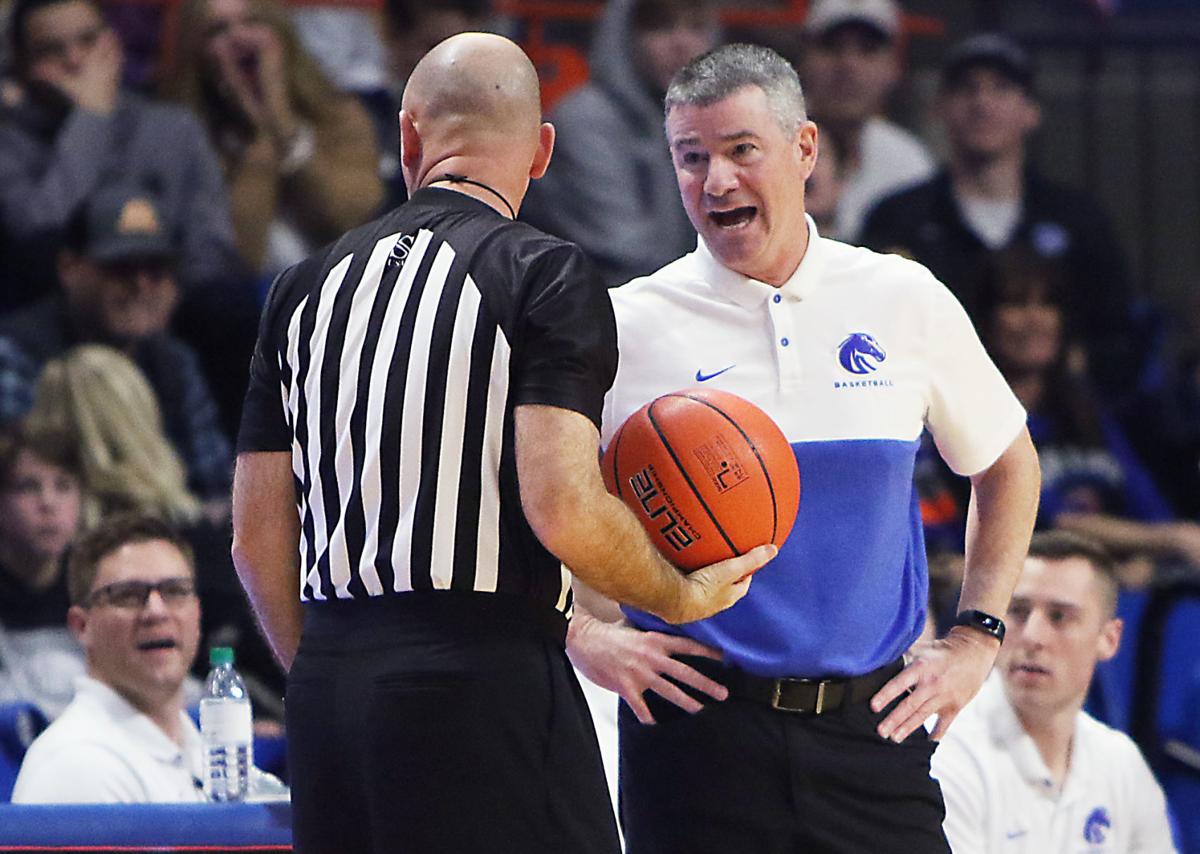 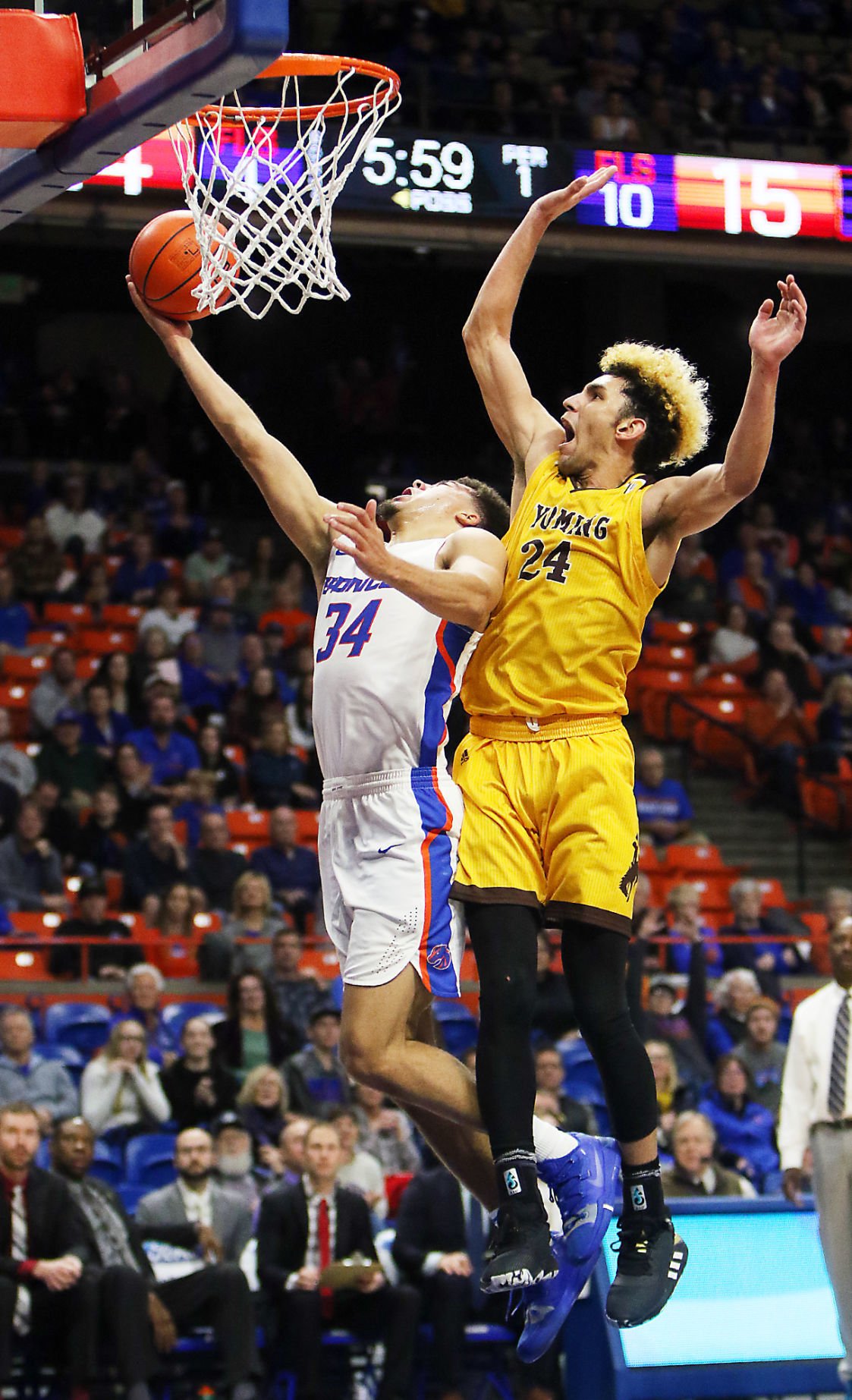 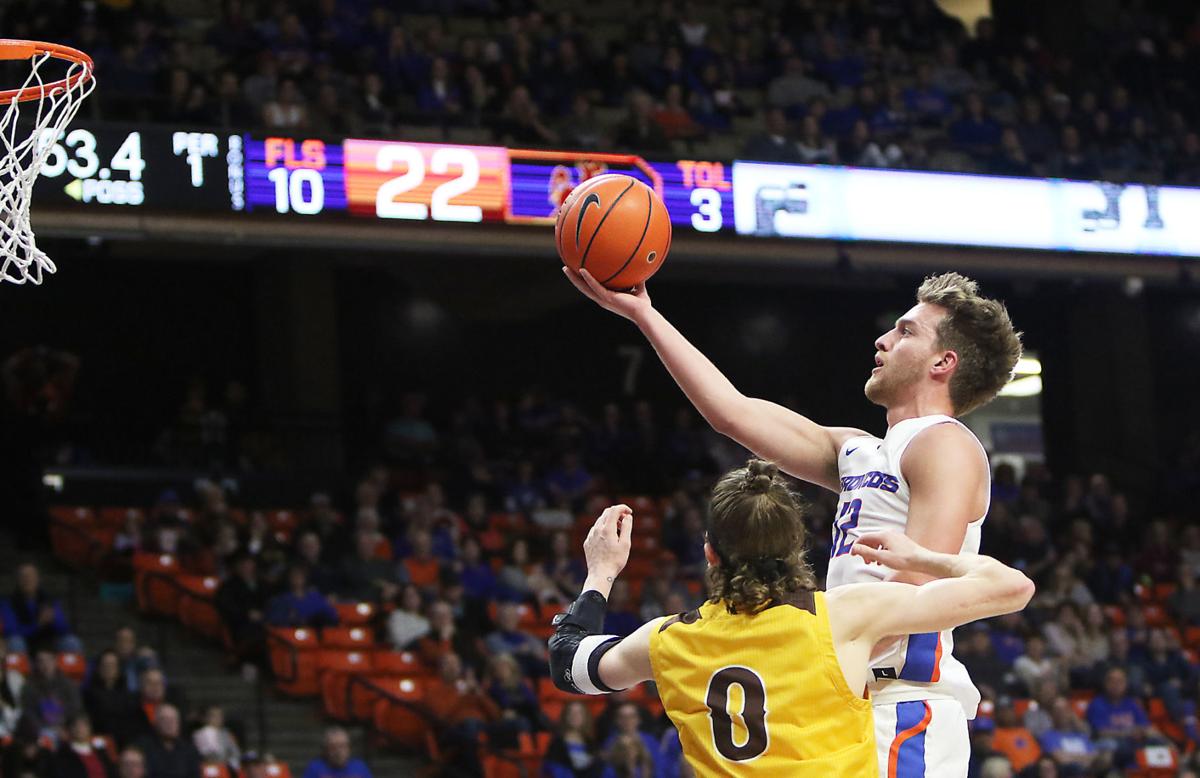 BOISE — Leon Rice wanted to watch the tape before he got too critical of the officiating. He also wanted to avoid potential discipline.

His actions during Wednesday’s game were enough to know how he felt.

Boise State and Wyoming were whistled for a whopping 46 fouls and the teams combined to shoot 38 free throws in an ugly, hard-to-watch battle at ExtraMile Arena that had both coaches arguing with the officials on seemingly every play.

Rice was calmer after the game since the Broncos came out on top.

Justinian Jessup had 20 points and six rebounds, Abu Kigab had 15 points and RJ Williams had 14 points and 10 rebounds as the Broncos did enough to survive what would have been a horrible loss in a 65-54 win over the Cowboys.

Offensive fouls, weird traveling calls and some apparent obvious violations that weren’t called contributed to a frustrating night for Rice and the 4,708 fans in attendance. But they left a little bit happier since the Broncos won.

“The referees have to call it in real time so I have to give them the benefit of the doubt,” Rice said. “But it became like the dam was broken because they got one call so they were going to give one to us as far as all those offensive fouls. … I have to look at the film and see what it really was and be fair.”

Coming off a 103-point effort four days earlier against CSUN, Boise State (10-5, 2-1 MW) scored two points in the first seven minutes of the game, made just one 3-pointer in the first half and had three starters on the bench in foul trouble for most of the night.

The result was a sloppy, slow game that had the Broncos on upset alert and trailing midway through the second half.

But Jessup scored 13 points after the break and Williams had nine — including a thunderous tomahawk dunk — as the Broncos used a 17-5 run to take a 56-46 lead with about five minutes to play.

“You aren’t going to be at your best every night and you have to find ways to get the job done on those nights and I think that was tonight,” Rice said.

The foul fest led to the Broncos finishing with more made free throws (22) than field goals (20), a stat that made Jessup chuckle upon hearing it during the postgame press conference.

“Geez,” Jessup said. “It’s super hard to try and get in a flow on offense. It’s good because we drew a lot of fouls obviously, but at the same time it kind of ruins the rhythm of the game a little bit. It’s definitely hard for guys to get going that way.”

Wyoming’s style of play made it an almost nightmare scenario for the Broncos. The Cowboys rank No. 341 in the country in tempo according to KenPom.com, but No. 5 nationally in percentage of field goal attempts that are 3-pointers. To summarize — they slow the game down and take up most of the shot clock every possession, and then take 3-pointers more than they do 2-pointers.

It can be a dangerous pair for an opponent if the Cowboys are hitting their outside shots (and they made eight from behind the arc). Throw in foul trouble and a cold night from the field, and the result would have been predictable: the 17-point underdog Cowboys hanging around and holding a lead for the first chunk of the second half.

Alston played less than six minutes in the first and was called for three fouls. He finished with four fouls, which contributed to a 1-for-10 showing from the field. His four points were a season low.

“It felt like Derrick, every time he drove he was looking around like ‘how do I not foul’ instead of driving to score like he’s so good at,” Rice said. “That makes it hard.”

It was as if the referees were getting paid by the whistle in the first half. The three officials called 21 fouls in the opening 20 minutes, including four in the first 46 seconds of the game.

Alston was whistled for three fouls in less than six minutes of action, while Kigab and Jorch had two fouls apiece. Wyoming had three players with two fouls, and Brandon Porter had three, and the Broncos were already in the one-and-one before the second media timeout.

Boise State trailed for much of the half, but took a 16-15 lead on a pair of free throws from Alex Hobbs with 5:59 remaining. Neither team led by more than three the rest of the half, and a putback from Williams just before the buzzer gave the Broncos a 27-24 lead at the break.

Wyoming hung around thanks to some hot outside shooting to start the second half, but the Broncos ultimately pulled away down the stretch.

It was Boise State’s fourth consecutive win and the ninth in the last 12 games. And while it certainly wasn’t the prettiest win during that stretch, the Broncos will gladly take it.

“It was a grind-it-out type of game,” Jessup said. “It was good we got that done. Every game won’t be like the last one where we got open shots and had a nice flow to the game. We had to adjust.”

Boise State will need to play much better moving forward as the schedule gets tougher. That starts Saturday in Reno when the Broncos travel to play Nevada. Tipoff is scheduled for 4 p.m. and the game will be televised nationally on CBS Sports Network.