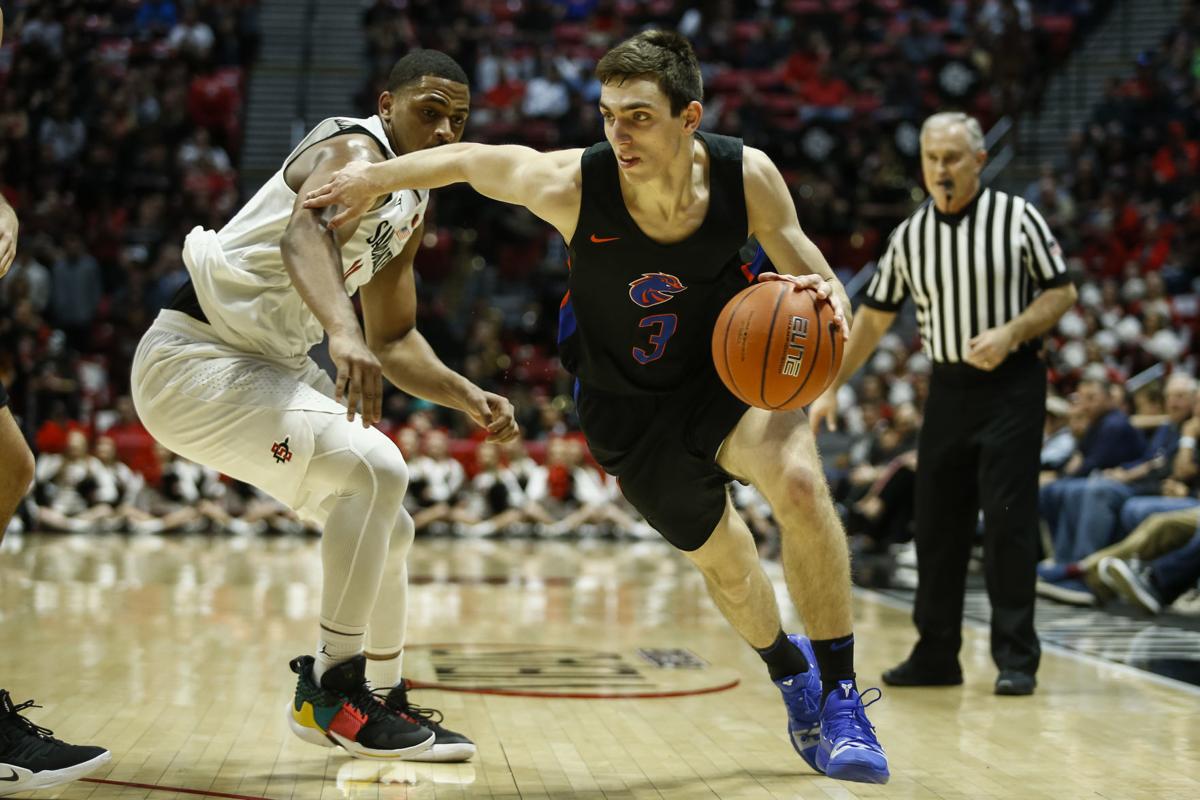 Boise State guard Justinian Jessup (3) drives around San Diego State forward Matt Mitchell (11) on his way to the basket in a game Feb. 16, 2019, at Viejas Arena in San Diego, Calif. 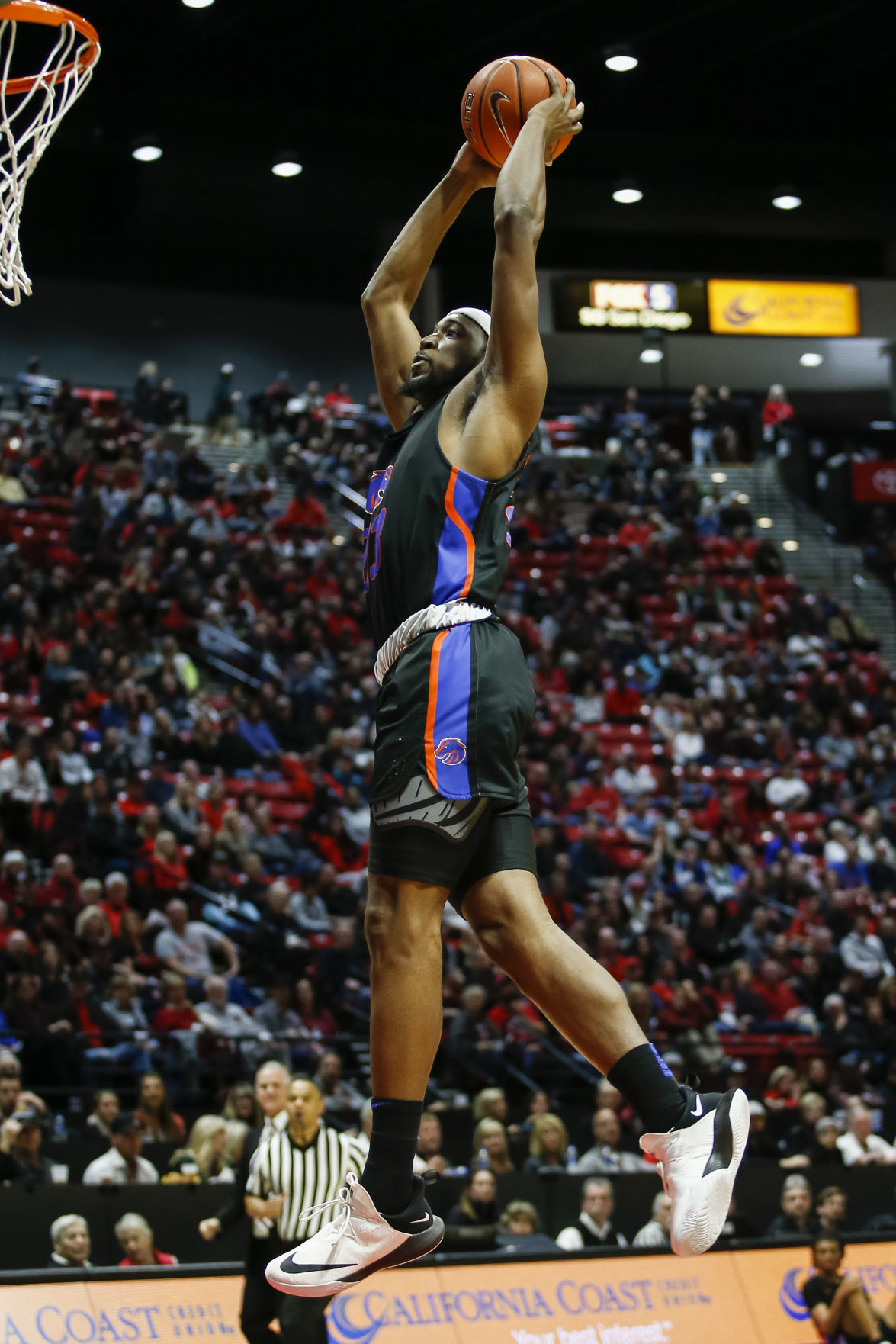 Boise State guard Justinian Jessup (3) drives around San Diego State forward Matt Mitchell (11) on his way to the basket in a game Feb. 16, 2019, at Viejas Arena in San Diego, Calif.

SAN DIEGO — History is not on the side of the Boise State men’s basketball heading into tonight’s showdown with No. 7 San Diego State at Viejas Arena.

But then again, maybe it is. Tipoff is at 8.

Boise State is just 3-27 all-time on the road against ranked teams in program history. But the Broncos’ last road win against a ranked team came in 2015 — at No. 24 San Diego State.

San Diego State (16-0, 5-0 MW) is one of just two undefeated teams left in the country, and has already announced a sellout for the 11,000-plus seat Viejas Arena.

Boise State has never beaten a team ranked in the top 10, and it has just three wins in 30 chances against top 25 teams in 10 years under coach Leon Rice.

What’s it all mean? Should the Broncos (11-6, 3-2 MW) find a way to beat the Aztecs in a game that will be streamed on ESPN3, it would probably have to be called the biggest win in program history.

“Yeah, no question,” Rice said. “The No. 7 team in the country and with one of the best home environments in the country, and they are playing really, really well right now. They are a really, really good team and we know we have a big challenge ahead of us. But that’s the beauty of athletics. We’ll embrace it and let the fur fly and see where the chips fall.”

The win over the 11th-ranked Blue Jays is to this point the highest-ranked team the Broncos have ever beaten. They would top that with a win over San Diego State.

The Broncos are also just 2-18 all-time in conference games when facing a ranked team.

But don’t try bringing up the historically negative statistics to Rice.

“Those are goofy statistics in the fact that there’s lies, damned lies and statistics,” Rice said. “That’s why I don’t overanalyze those things. No. 1, there’s a reason why they are ranked. No 2, you’re playing them on the road so that’s even harder. (Those) are skewed stats. They mean they are really good.”

San Diego State has wins over BYU, Creighton, Iowa and Utah in nonconference play, and won 77-68 on the road at preseason Mountain West favorite Utah State last Saturday. Only four of San Diego State’s 16 wins have been decided by single digits, and they are winning by an average of nearly 19 points per game.

“They went out and played some people,” Rice said. “They’ve done a great job to be 16-0 and it’s remarkable because they didn’t schedule their way into it. They played legit teams night after night and they’ve handled them.”

The Aztecs are led by Washington State transfer Malachi Flynn, who is averaging a team-high 16.1 points and 5.0 assists per game. He’s one of three starters who hadn’t played a minute for San Diego State prior to this season.

“He’s dynamic. What a good point guard he is,” Rice said. “He’s got a good feel for the game, shiftiness, his command for the game — when you watch a guy like that on film sometimes you’re like ‘wow that was a tough shot’, ‘great play’, ‘nice move’, over and over again and watching Malachi on tape that’s what I’ve seen.”

San Diego State is clearly the top team in the Mountain West and one of the best in the country. The stats back it up.

“It’s going to take an A-plus game,” Rice said. “They are a terrific team to have gone through the season to this point (without a loss) and play the teams they have played and the places they’ve played, it’s an amazing accomplishment. It’s hard to win one Division I game. Ask any coach around the country. And they’ve rattled off all of these and they look like they are playing good.

“It’s going to be a hard challenge but our guys will embrace it and come out and compete. That’s what you do in a game like this.”

Two stats Rice enjoyed hearing? Boise State is 6-4 in the last 10 meetings with San Diego State, including a 2-2 mark in games at Viejas Arena.

In a year where there’s seemingly been a head-scratching upset in the Mountain West almost every night, the Broncos are hoping to be next to pull off a stunner. And what a historic win it would be.