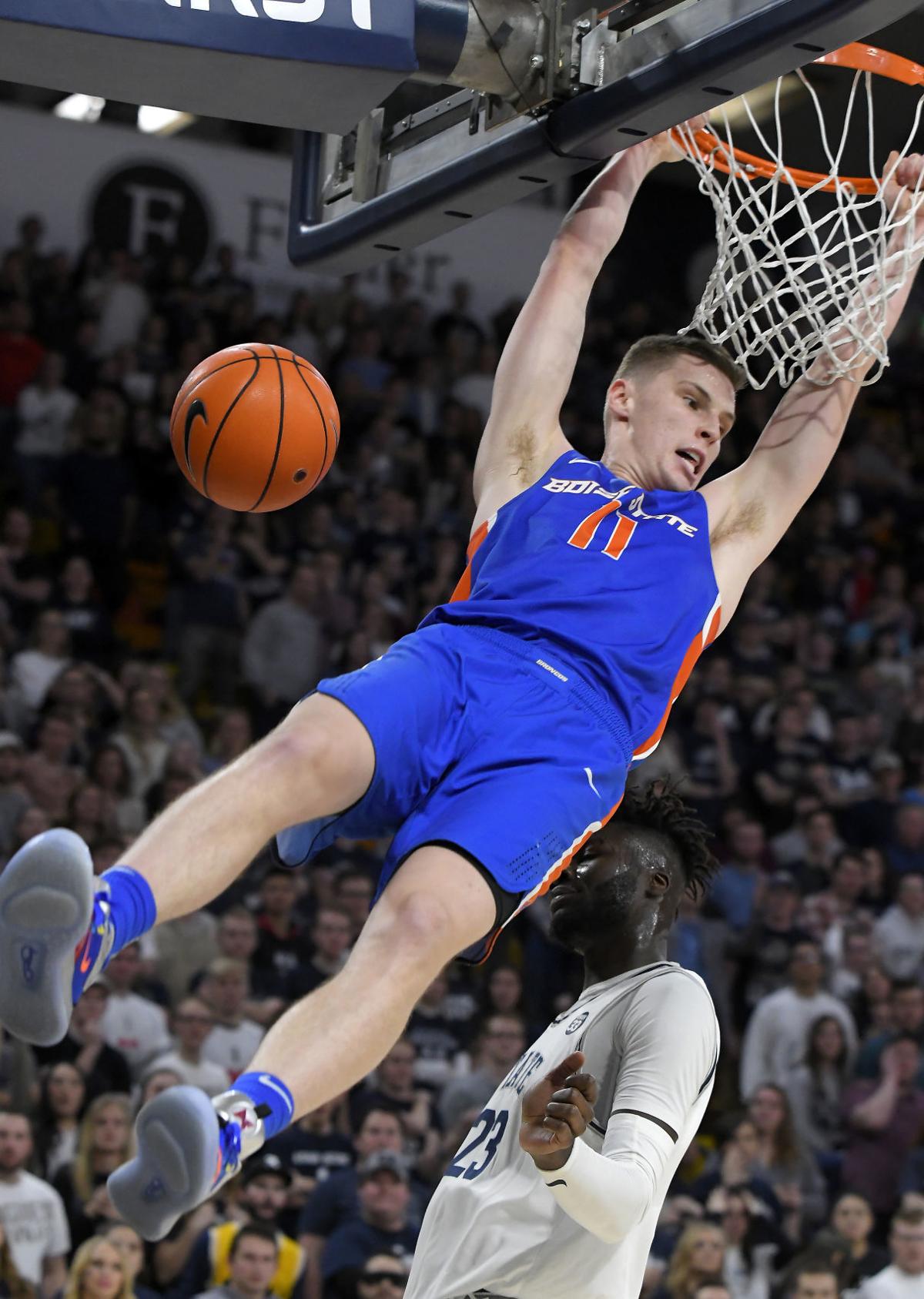 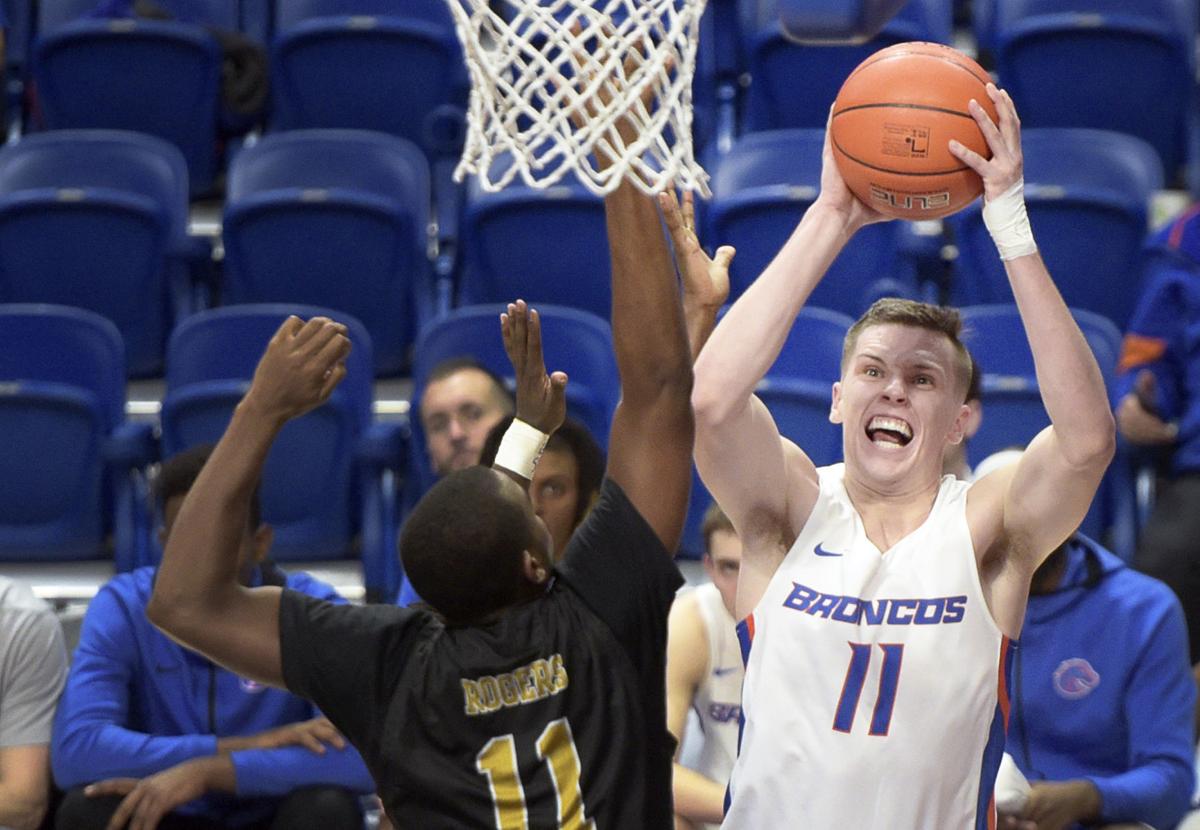 Boise State forward Riley Abercrombie (11) shoots the ball during the game against Alabama State on Saturday, Dec. 14 at ExtraMile Arena in Boise.

Boise State forward Riley Abercrombie (11) shoots the ball during the game against Alabama State on Saturday, Dec. 14 at ExtraMile Arena in Boise.

BOISE — With the writing on the wall that his role likely wouldn’t change much next season, Boise State forward Riley Abercrombie figured transferring elsewhere might be in his best interest.

He finalized that decision Monday, committing to return home to Houston to play at Rice University.

Abercrombie broke his wrist shortly before the first game last season and never was able to make an impact when he returned, averaging just 4.2 minutes in 17 games as a redshirt freshman.

“Getting hurt at the beginning of the year really hurt me because that’s when I would have played the most and had an opportunity to be out there on the floor,” Abercrombie told the Idaho Press. “And with all the new guys coming in, I knew it was going to be really hard to break into the rotation next year, so after talking to the coaches, we just all kind of decided that the best thing might be to leave.”

The 6-foot-9 Abercrombie came in with plenty of hype as a strong outside shooter and was expected to be a contributor for the Broncos after redshirting during the 2018-19 season. But he never was able to show any of that potential, finishing 10th on the team in minutes ahead of only walk-ons Bing Huang and Chase Berry.

“I’d come in for 50 seconds at the end of the half or something after I sat still for 30 minutes and you had to make one, otherwise you weren’t going back in, and that’s a very tough role to play,” Abercrombie said. “There’s no hard feelings at all. It will be a sad goodbye when I go back up and get my stuff and say goodbye to everybody.”

In the rare chances he did get to play, Abercrombie struggled. He made just 5 of 18 shots from 3-point range (27.8%), including an 0 for 5 game from deep in a winnable game at Utah State.

He had a career-high six points twice, against both Alabama State and at Fresno State. He had four points, a career-high three rebounds and an assist in a career-high 17 minutes at Utah State.

“I love Riley and I wanted to look out for what’s best for him and he needs to be in a situation where he can play a lot,” Boise State coach Leon Rice told the Idaho Press Monday night. “He’s ready. I’m 100 convinced he’s going to be a great player given the opportunity to get on the floor more, and that was going to be really, really hard with the guys we had coming back.

“He redshirted his first year, then didn’t play many minutes last year and I never want to promise a kid something I can’t deliver on so we talked long hard about it. I don’t want him to leave and he doesn’t want to leave, but we also want him to be able to play.”

The Australia native grew up in Houston, which made Rice a natural fit as his next destination.

“I’ll be close to my family and also hopefully be able to get the waiver to play next year,” Abercrombie said. “And with the opportunity they had for me to come in and contribute, it was a no-brainer for me.”

Boise State had four Division I transfers sitting out last season that are expected to play major minutes next season, and Abercrombie likely would have struggled to see the floor again.

“It was definitely a tough decision,” Abercrombie said. “I’m close with coach Rice and the guys and I liked everybody there. It wasn’t a clear-cut thing that I wasn’t going to play next year and that I had to leave and that made it even harder, but I had to make a business decision first and foremost and a basketball decision, and because of that, I think it was the best thing to leave.”

Boise State now has three scholarships still remaining for next season. They are hoping to find at least one post player that can contribute next season, either from the JUCO ranks or as a graduate transfer.

One position the Broncos don't need much help at? Wings. And that's why it made sense for Abercrombie to leave.

Just not the Rice he had hoped for.

Smith, who went to Lewis and Clark High School in Spokane, Washington and played on the same summer AAU team as current Bronco Max Rice, was recruited by the Broncos out of high school before ultimately going to junior college.

The 6-foot-7 wing shot 56 percent from the field and 38.3 percent from 3-point range. His 23.3 points per game ranked No. 11 nationally among junior college players.

Smith committed to the Broncos last month, but has yet to officially sign his letter of intent. He’ll join what could be the most talented team in program history with five Division I transfers and maybe the return of leading scorer Derrick Alston Jr.