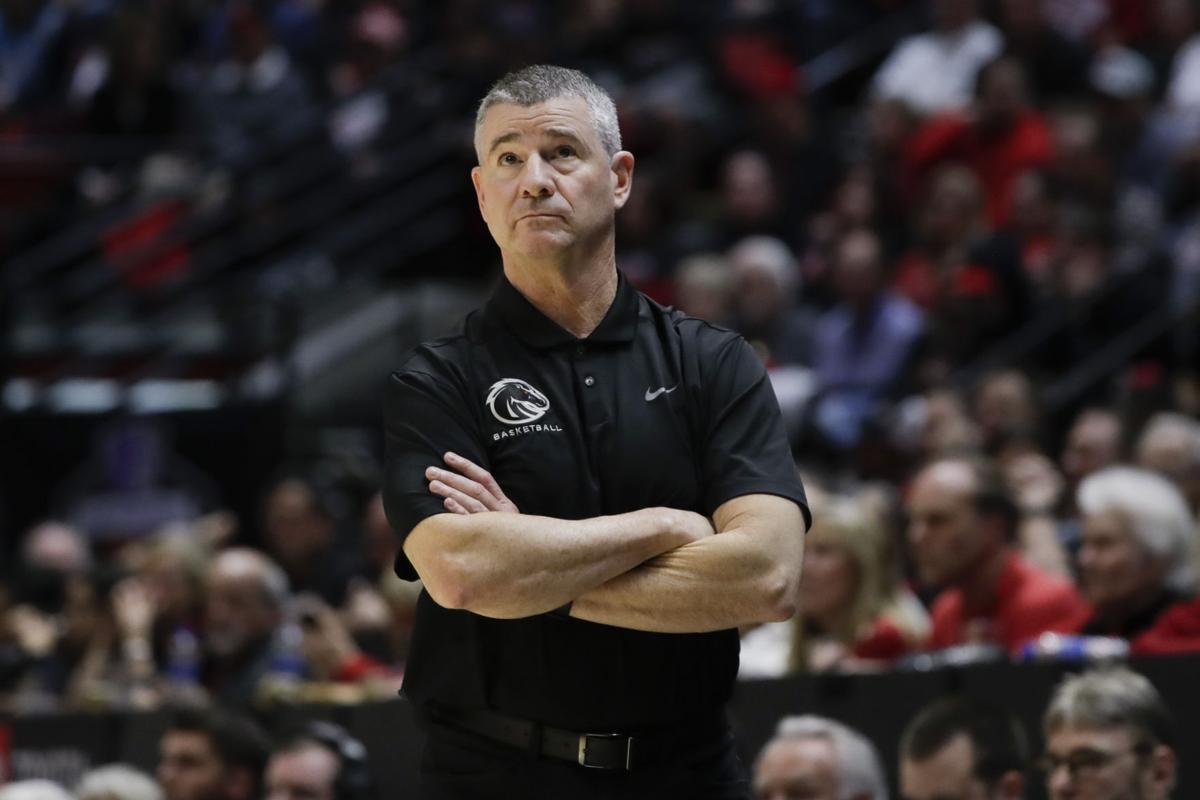 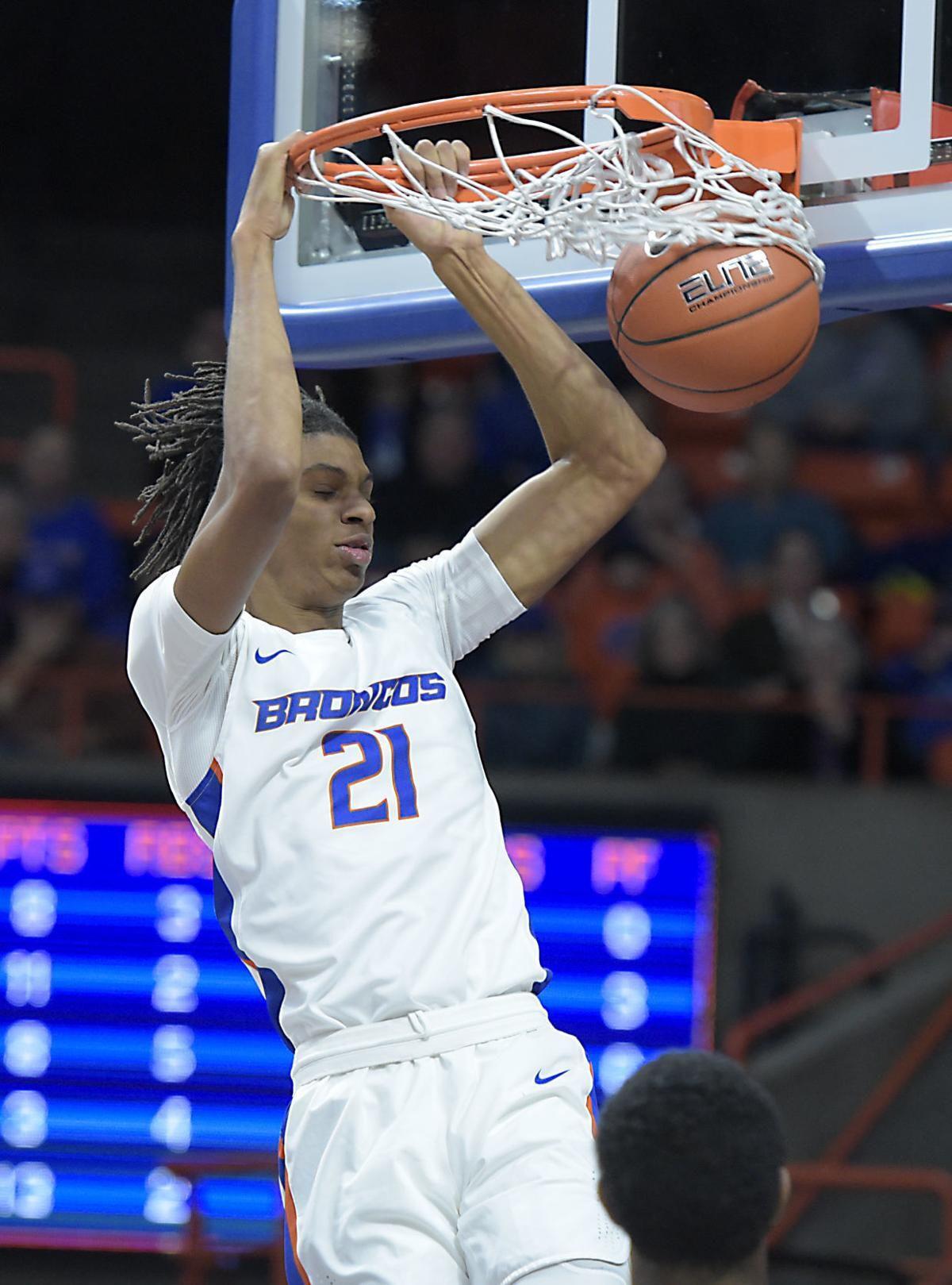 Boise State’s Derrick Alston Jr. dunks the ball during a game April 14. Alston elected to return to the Broncos for his senior year despite the uncertainty surrounding the ongoing COVID-19 pandemic.

Boise State’s Derrick Alston Jr. dunks the ball during a game April 14. Alston elected to return to the Broncos for his senior year despite the uncertainty surrounding the ongoing COVID-19 pandemic.

BOISE — Boise State men’s basketball coach Leon Rice is confident there will be a season in some form this winter.

The postponement of college football by several leagues including the Mountain West has already worried some about the future of basketball. But Boise State’s 10th-year coach, the longest tenured coach in the Mountain West, expects his team will get to play games this season.

“Who knows what kind of schedule we’ll be playing,” Rice said. “But everything is a go right now. We’re going to approach it that way. It’s fluid and we’ve seen it be fluid to this point and everything could change in a moment, but we have to be ready when we do get our opportunity, because basketball will happen this year.”

The Pac-12 already canceled all nonconference basketball games through Dec. 31. But the decision to do it so soon surprised many, and no other conferences have followed suit.

Plenty of possible scenarios remain in play for college basketball and the Mountain West. They could start Nov. 10 as scheduled and play a full season, they could push the season back a few weeks and start around Thanksgiving, or they could move forward with a conference-only schedule starting in January.

But five months after the NCAA Tournament was canceled at the start of the COVID-19 pandemic, there’s growing optimism around the sport that a season can be salvaged one way or another.

“I think I’m pretty confident of that because first of all you are controlling so many less variables with just the sheer amount of numbers,” Rice said of a 25-member traveling party for college basketball teams as opposed to 100-plus for football. “If you talk to any college coach in America, we’re going to have it and we’ll have a tournament. We just don’t know when.

“Will it start in November, December, will we only play league games? None of that is resolved yet, but it’s not resolved negatively either. I’m always optimistic, but I know I have to be realistic in this situation too. We’re just going to roll with it and be ready when we get our chance.”

The ‘bubble’ model used by the NBA and NHL is one Rice said he could see working in college basketball, and one that’s already being discussed behind the scenes. A group of teams could meet in one particular location and quarantine and test for COVID-19 before all playing each other to get games in. The format could work for both nonconference and conference games.

“Oh absolutely it could,” Rice said. “There’s been lots of discussions on that first in the preseason and then what maybe you could do for conference. (Assistant coach) Mike Burns has been working pretty diligently on different plans and working with people in our league just in case. We don’t want to lose the season. A lot of the schooling can be done online which is happening anyway, so something like that could happen.

“It actually would be feasible and we could make something work that way and have a season worst case scenario. The NBA has shown it can be done and done successfully ... I think everyone feels good about what the NBA was able to do and how they managed it. Granted we all know we don’t have the resources and the situation the NBA has, but we can take what they did and the model they did and make some things work for sure.”

Boise State’s team should be one of the best in the Mountain West. Leading scorer Derrick Alston Jr. returns along with two other starters, and the Broncos add four Division I transfers that all should make big impacts.

And that’s why if nonconference schedules have to be adjusted because of the pandemic, Rice wants to make sure the Broncos have a seat at the table.

“We’re going to have a good team and we’re excited to play, so if there does become a situation where teams are scrambling to get into bubble situations I want to make sure our team has a presence in these opportunities because of the quality of team that we have,” Rice said.

“There’s a lot of different talks about bubbles, even in the preseason. People are smart about working through contingency plans and we have to do that and that’s the hardest part about all this. Our administration, everybody, you work so hard developing plans and the next day plans are blown up and you have to start over again. It’s a hard position for everyone to be in, so we just have to roll with it and keep fighting.”

Boise State didn’t have any Pac-12 teams on the schedule this year, other than a preseason scrimmage with Utah. The Broncos are moving forward with a full schedule at this point, and will adjust as needed.

NCAA Senior Vice President of Basketball Dan Gavitt said recently he expects a decision “by mid-September” on whether the college basketball season can start on time. Unlike football, the NCAA controls the basketball championship at the end of the season and a more unified and consistent approach is expected.

Boise State currently is doing strength and conditioning workouts in the weight room and small group sessions on the basketball court. They have yet to do any full team practices or 5-on-5 scrimmages. Rice said for now the athletic department is “slow playing everything” to try and avoid any potential COVID-19 outbreak, which he is on board with.

“The nice thing is I have a team that’s played a lot,” Rice said. “We have a lot of veterans that know what they are doing.”

One thing they don’t know yet? When they’ll get to play a game.