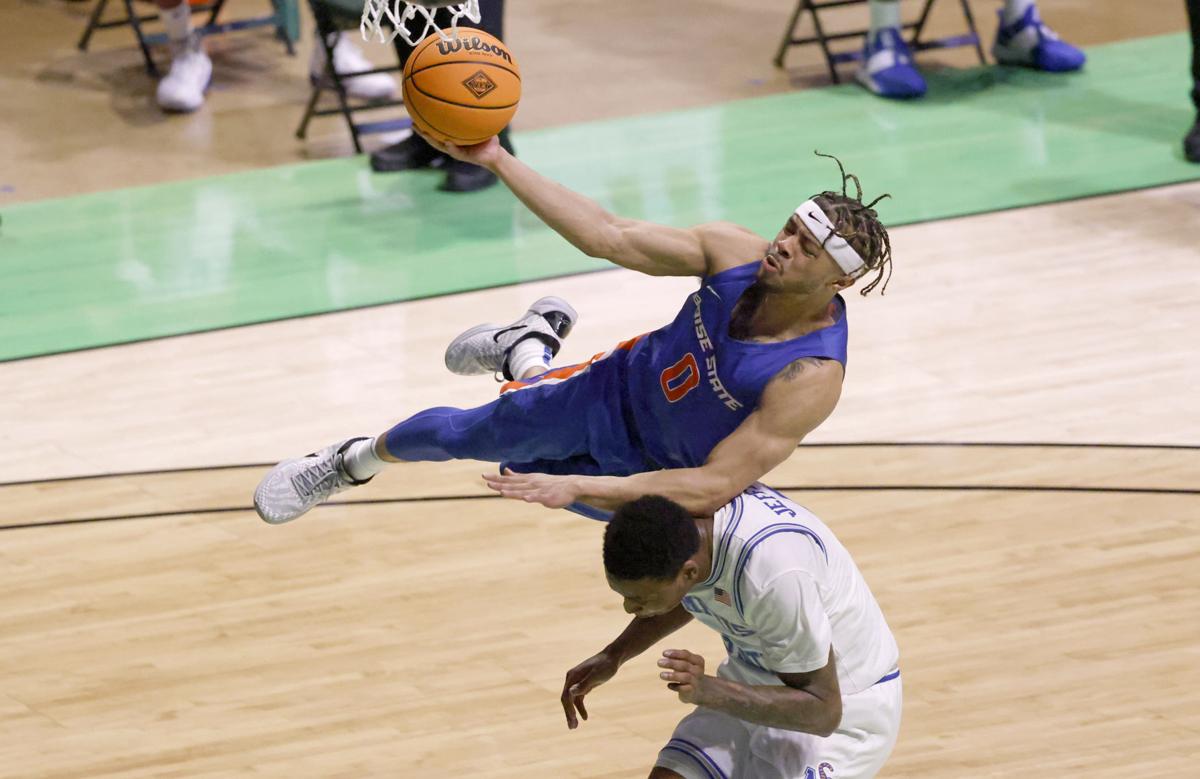 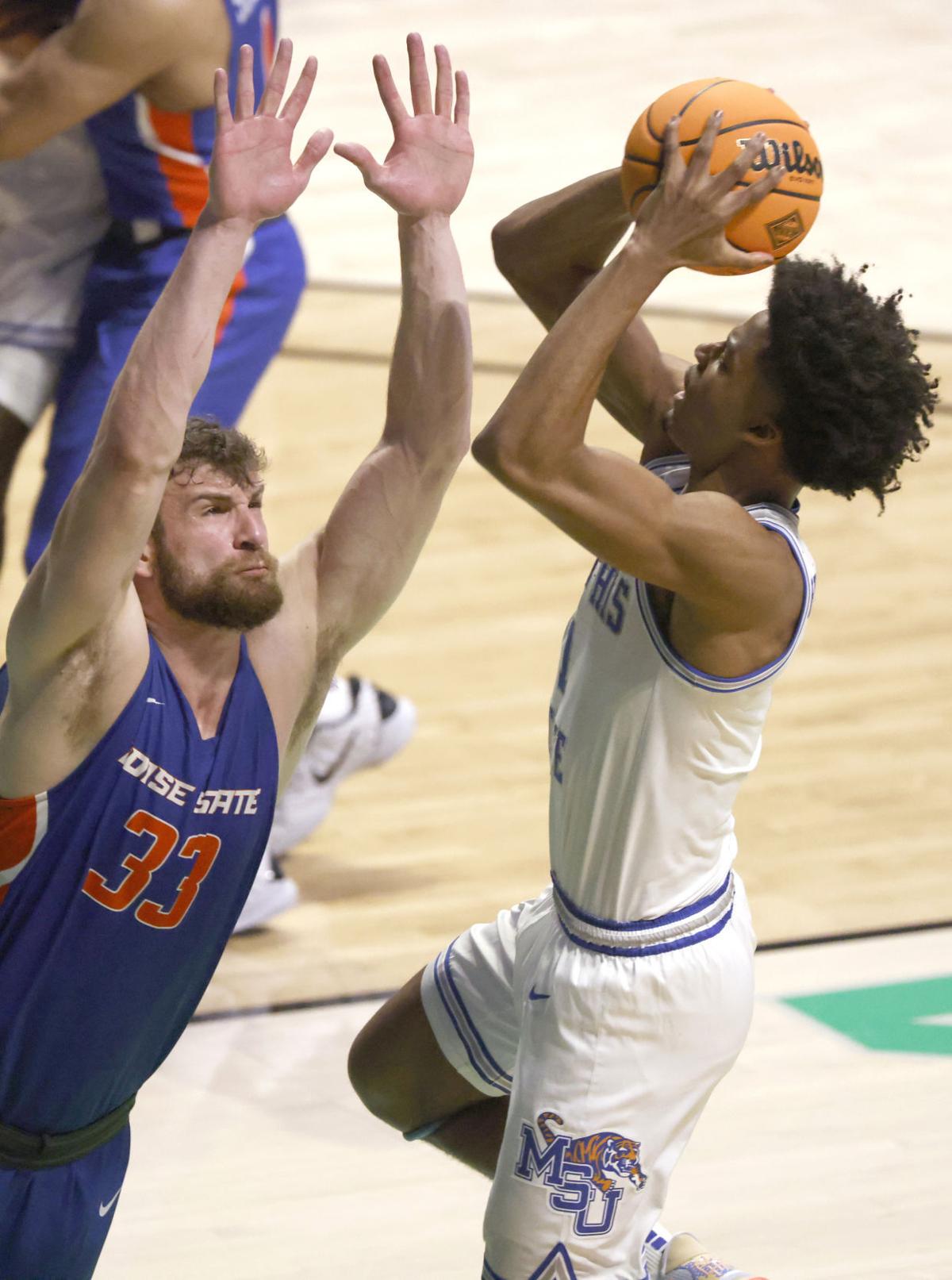 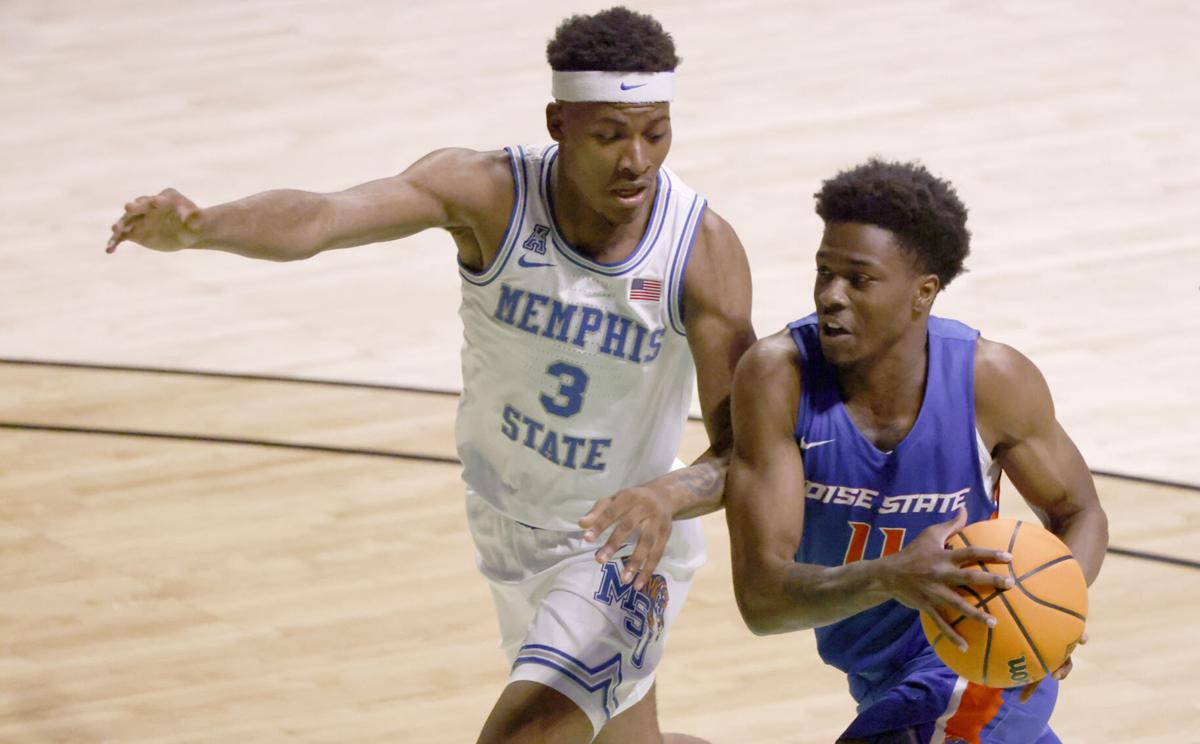 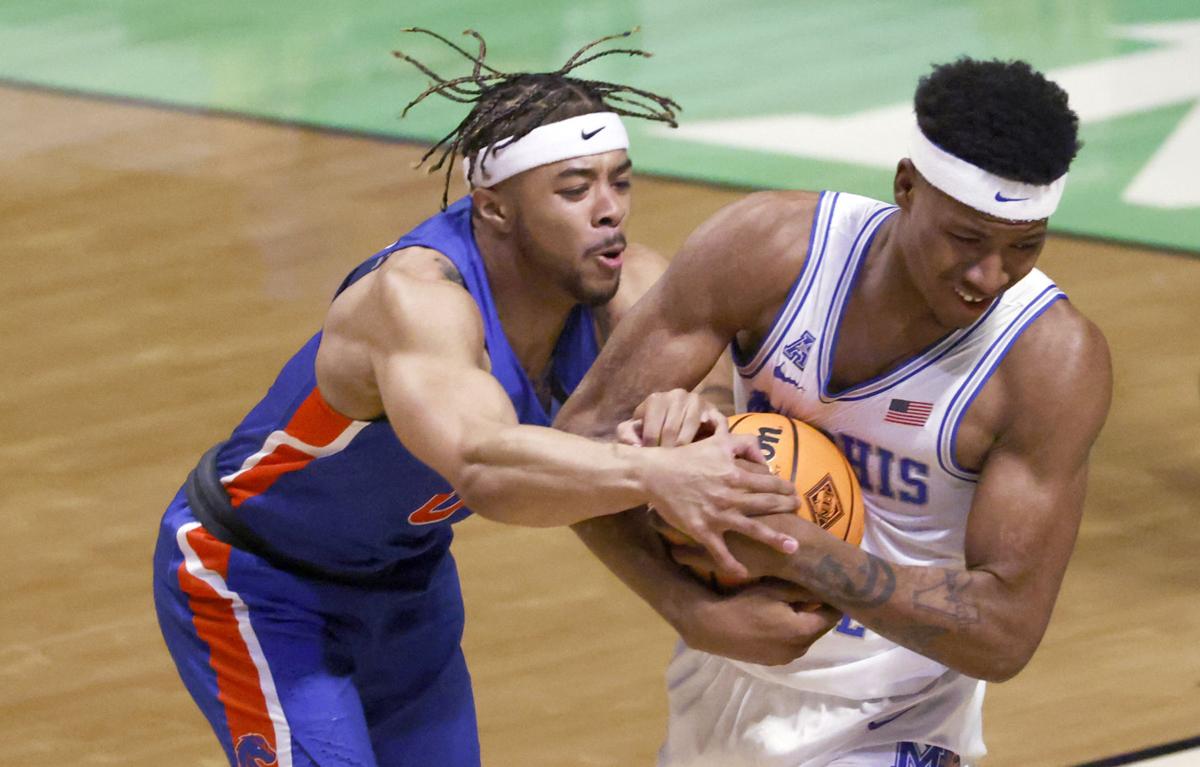 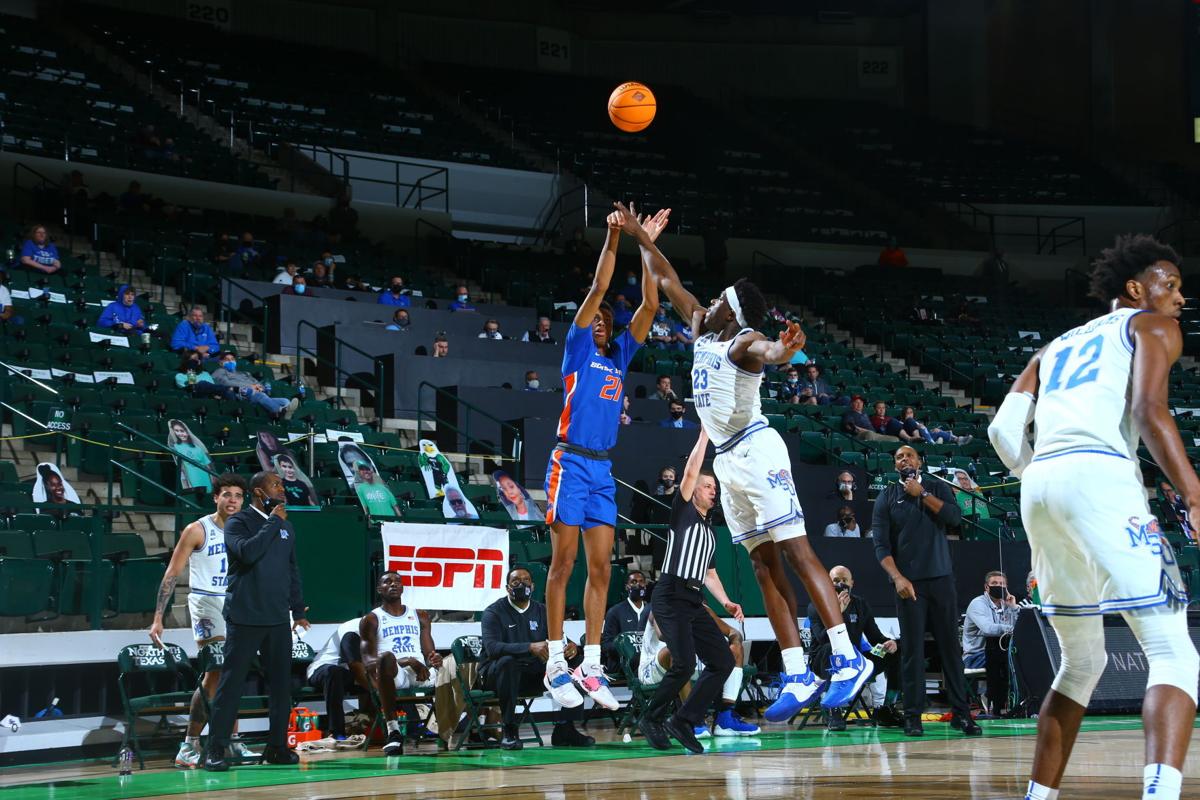 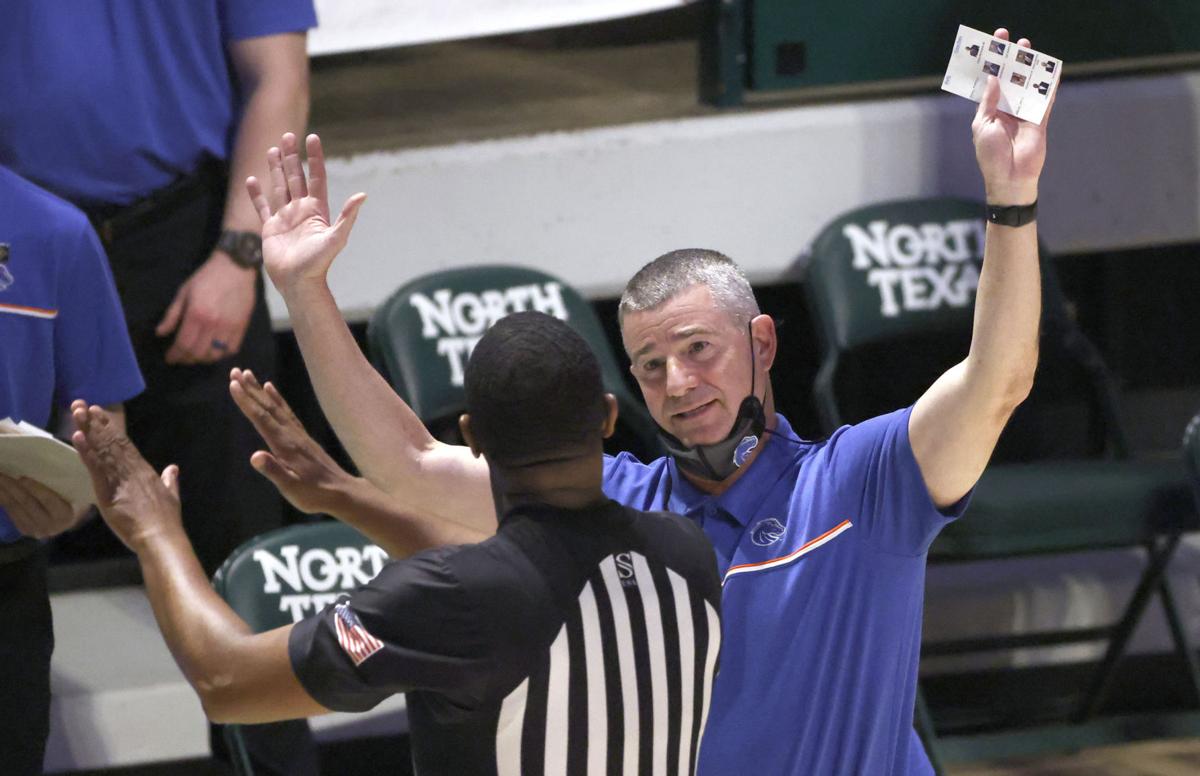 DENTON, Texas — It was almost a fitting end to a mostly frustrating season for the Boise State men’s basketball team.

One free throw away. One rebound away. One bucket away.

Boise State stormed back from a nine-point deficit in the final five minutes to take the lead, but ultimately the Broncos couldn’t hang on in a season-ending 59-56 loss to the Memphis Tigers on Thursday night in the quarterfinals of the NIT at UNT Coliseum.

“Our guys gave it everything they had,” Boise State coach Leon Rice told the Idaho Press. “They just had a little more than us left in the tank. Our guys kept fighting. We were right there.”

Had Devonaire Doutrive made both free throws instead of one with 47.5 seconds left, the Broncos would have led by two and the ensuing bucket from Memphis would have only tied the game instead of putting the Tigers up by one.

Had Boise State been able to secure the rebound on a missed shot from Boogie Ellis with 35 seconds left on the next possession, the Broncos would have had the lead and the ball.

Had Derrick Alston Jr. been able to get off a game-tying 3-pointer in the final seconds before Memphis fouled him, the game might have gone to overtime.

But none of the three happened, and the Broncos (19-9) were dealt with another close, late, frustrating loss that sends them into the offseason with a feeling of ‘what could and maybe should have been.’

A team with maybe the most talent in the program’s history didn’t get to the NCAA Tournament. And it couldn’t get past the quarterfinals in the NIT, falling for the fifth time in six games to end the year.

“It never goes exactly as you planned,” Rice said. “We wanted to win more games, but Memphis was in the same boat. They were one shot away. ... It is what it is, but the best thing was our guys learned a lot of lessons this year about togetherness and toughness and they showed that tonight.”

Mladen Armus had 12 points and seven rebounds to lead the Broncos, who had all five starters in double figures but just two points from the bench.

Alston had 11 points in what is likely his last game at Boise State. Doutrive had 11 and Marcus Shaver Jr. and Emmanuel Akot each had 10.

The Tigers entered the game with some of the best defensive metrics in the country — and they did nothing Thursday to show otherwise.

“They got my respect, I know that,” Rice said. “That’s where you need some depth. I think that really hurt us in the second half. Those guys played so hard and that can affect your shooting and your decision making, but you have to hand it to our guys because they left it all out there against maybe one of the best defensive teams in the country.”

Boise State trailed 54-45 with 5:18 left before pulling off a near-improbable comeback. Back to back buckets from Armus and a 3-pointer from Derrick Alston Jr. pulled the Broncos within 54-52 with 3:00 left.

Armus then used an impressive drive and left-handed layup from the top of the key to tie the game at 54-all with 1:33 left. After another Memphis missed shot, Doutrive was fouled and went to the foul line with 47.5 seconds left with a chance to put the Broncos in front.

Ellis missed a shot on Memphis’ next possession, but Lester Quinones grabbed an offensive rebound and scored with 32.5 seconds left to put the Tigers up 56-55.

“We got the stop but we just didn’t get the rebound,” Rice said. “We get that rebound and we’re probably still playing on Saturday.”

Doutrive then drove the lane on Boise State’s next possession, but he missed a floater with 15 seconds left and the Broncos were forced to foul. DeAndre Williams made both free throws with 13.2 seconds left to put the Tigers up 58-55.

Boise State tried to get the ball to Alston for a game-tying 3-pointer on the next possession, but Memphis fouled Alston before he could get the shot up. Alston made the first free throw, but the Broncos couldn’t get the rebound when he missed the second one on purpose.

Close but not close enough.

“We battled the whole game,” Alston said. “That’s a really good team we just played against. They played a crazy style of defense and they are long and athletic on offense and we just battled with them all game, so I’m just proud of our guys for sticking with it and fighting to the end.”

Boise State got off to a hot start and led 15-5 after a 3-pointer from Akot. But Memphis started turning up the pressure on defense and used a 14-2 run to take the lead at 19-17 on a 3-pointer from Williams midway through the half.

Memphis’ full-court defense continued to give the Broncos problems, and the Tigers extended the run to 22-6 to lead 27-21 with 5:05 left in the half.

A dunk from Armus brought the Broncos within 29-26, but Landers Nolly scored just before the half and Boise State went into the locker room trailing 31-26.

The two teams combined for 23 turnovers in the first half and they shot just 6 of 26 from 3-point range. The Broncos had 13 turnovers and shot just 39% and seemed fortunate to be down just five at the half.

Boise State trailed most of the second half and by as many as nine before the late 10-0 run put them up in the final minute.

It was all for naught.

“Our guys battled against a really, really good team,” Rice said. “I’m really proud of their effort and how we hung in there against the best defensive team we’ve played this season.

“We had a one-point lead with 30 seconds to go and it looked like we were going to get that rebound. ... We were just one rebound away. But I’m proud of our guys to keep fighting like they did.”

Boise State could return everybody except Alston to next year’s roster, so there’s plenty of reason for optimism. But after the Broncos failed to reach expectations and get to the Big Dance, there figures to be some pressure on Rice and the group for better results.

Rice, for one, can’t wait to get back to work.

“Oh absolutely,” Rice said. “It’s exciting. I don’t even want to think about that now, but you are always thinking that. I love this team and the guys I get to coach and I’m looking forward to next season.

“We have a lot of guys in this program that we’re going to make big progress with.”