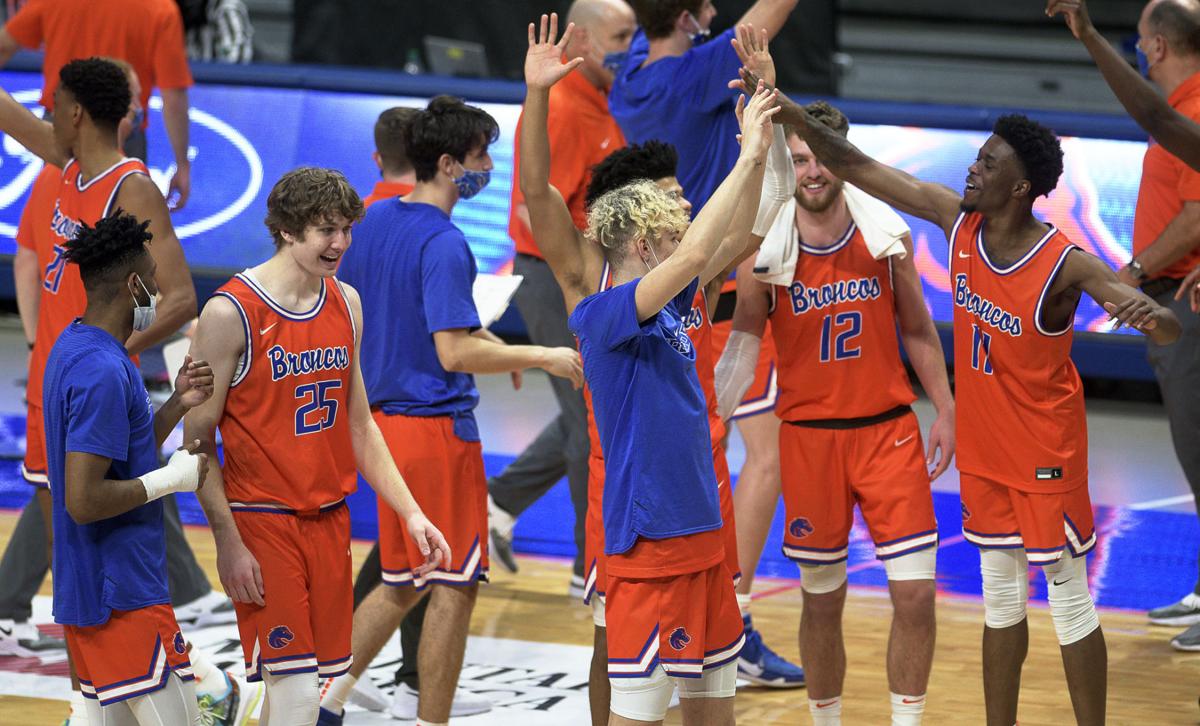 Boise State men’s basketball players celebrate on the court after winning a game against Utah State on Feb. 19. 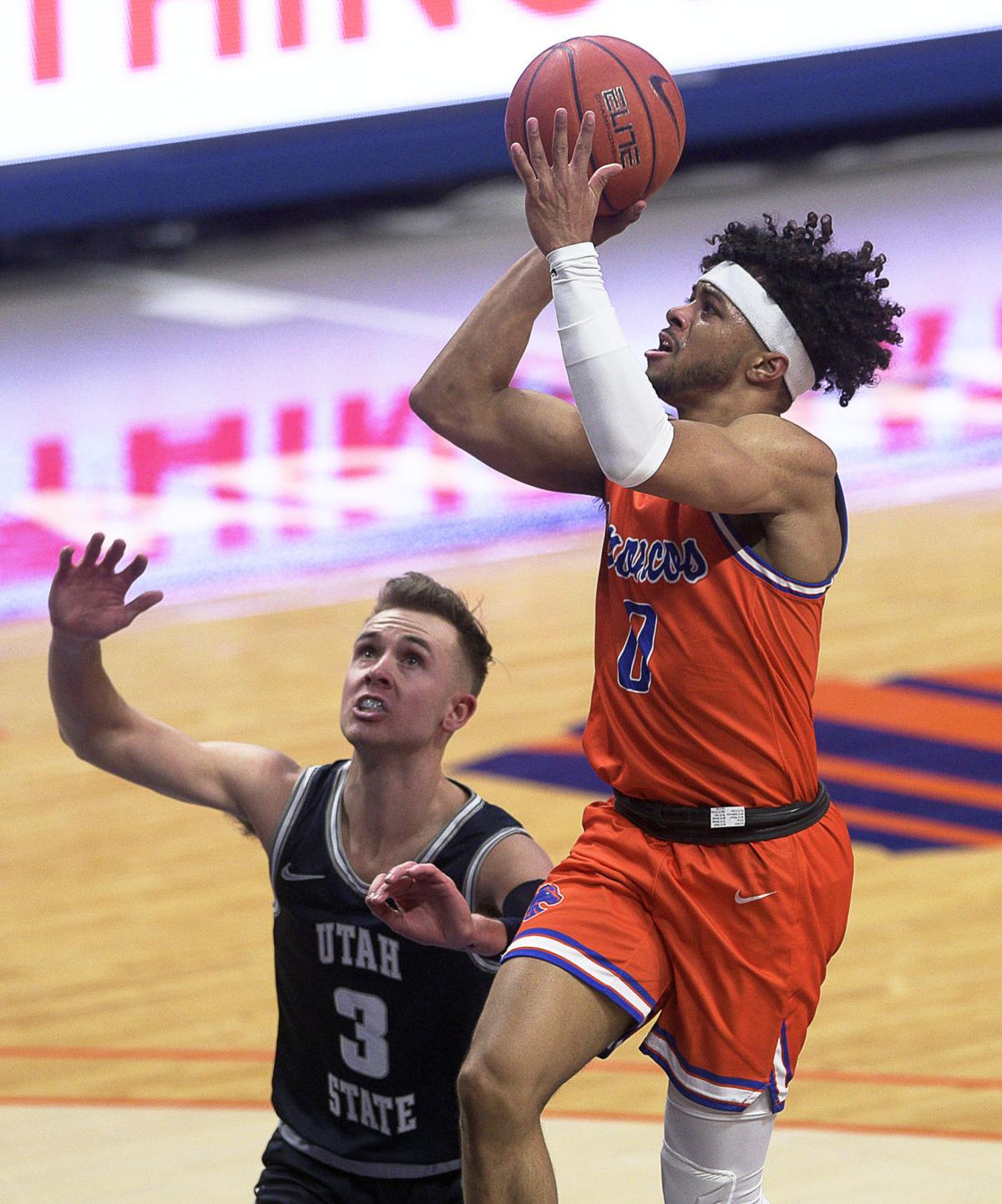 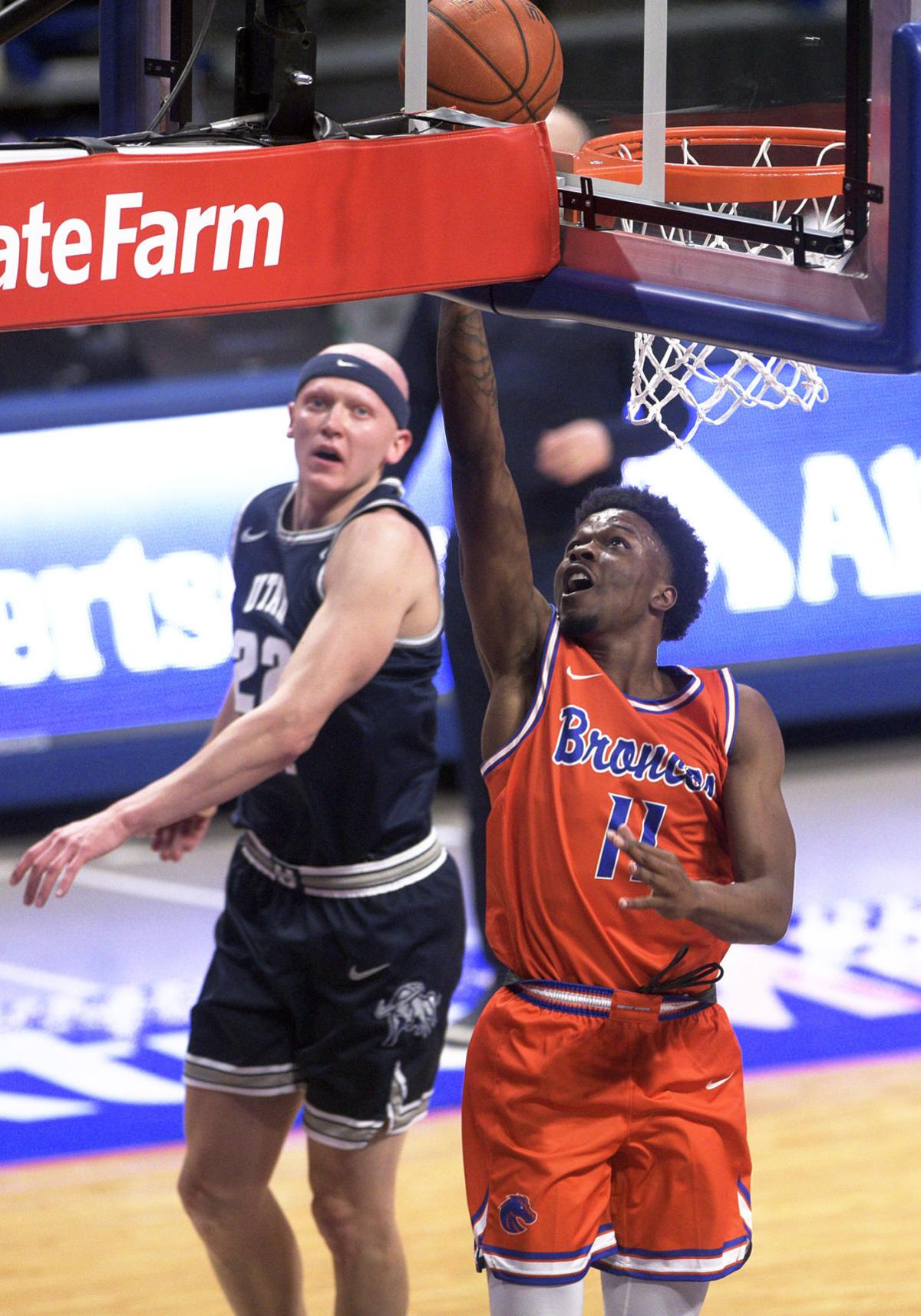 Boise State guard Devonaire Doutrive (11) goes in for a layup during the game against Utah State on Feb. 19. 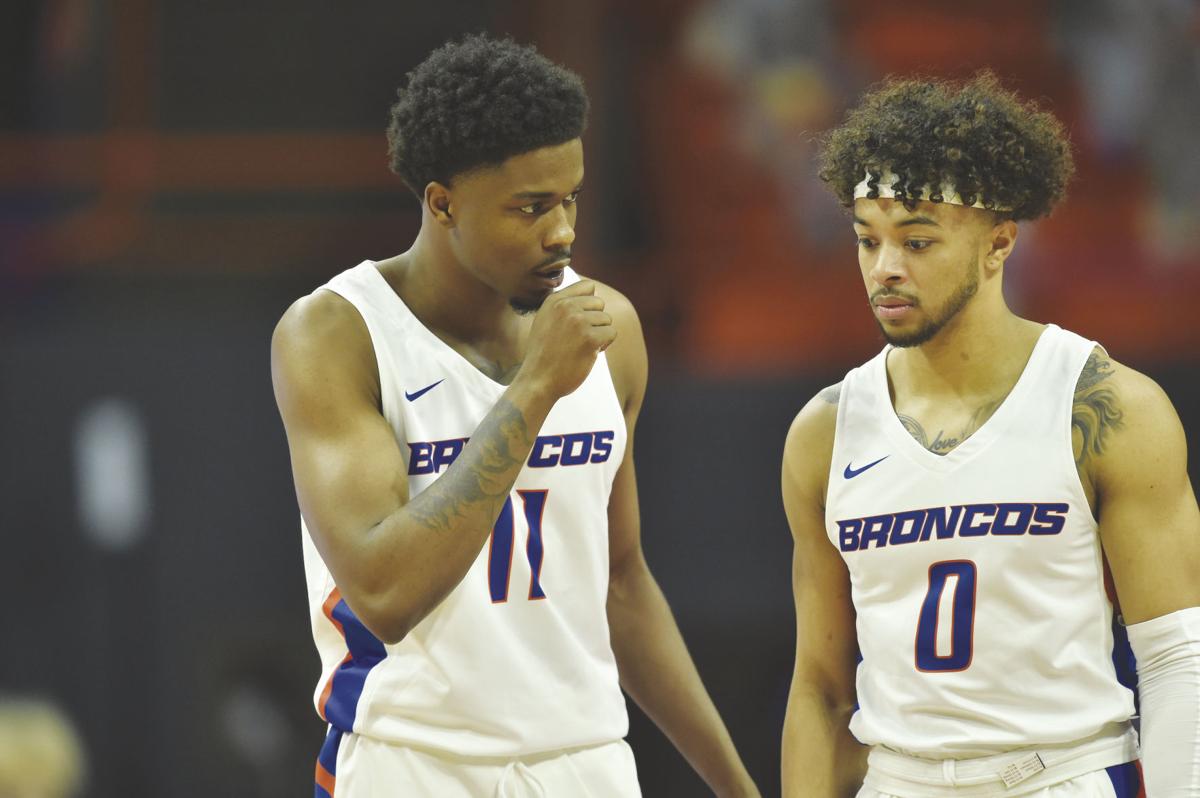 Boise State men’s basketball players celebrate on the court after winning a game against Utah State on Feb. 19.

Boise State guard Devonaire Doutrive (11) goes in for a layup during the game against Utah State on Feb. 19.

BOISE — A season filled with high expectations and plenty of promise ended in disappointing fashion for the Boise State men’s basketball team.

The Broncos, once 13-1 and on the cusp of landing in the Top 25, stumbled down the stretch and fell all the way from a near-NCAA Tournament lock to a No. 2 seed in the NIT.

Boise State lost eight of its last 14 games, including a 1-5 finish to close it out. The final chapter of another ‘what could have been’ year came when the Broncos couldn’t hold on to a one-point lead in the final minute in a 59-56 loss to eventual NIT champion Memphis in the quarterfinals.

Boise State’s worst loss was a crushing home loss to Fresno State (No. 191 at KenPom) in the regular-season finale that proved to be a big reason why Boise State didn’t make the NCAA Tournament.

In between, the Broncos had two thrilling home wins against Utah State, two close losses at No. 22 San Diego State and three frustrating losses to Nevada.

Boise State is currently ranked No. 60 in KenPom, which would be the program’s best finish since it was No. 47 at the end of the 2014-15 season.

To many it was an underachieving-but-familiar result for a program still looking for its first ever NCAA Tournament win. Billed by some as the best team in school history, the Broncos instead faded down the stretch and finished with a third NIT appearance in the past five years.

But for as frustrating as the 2020-21 season was for the Broncos and their fans, there’s plenty of reason for optimism moving forward. Leading scorer Derrick Alston and point guard RayJ Dennis depart, but Boise State figures to bring back a large part of its roster.

Here’s an early look at the Broncos heading into the 2021-22 season:

OUTGOING SENIORS: The only for sure departure is Alston, who was a first-team All-Mountain West selection after leading the Broncos with 17.0 points per game. Alston struggled to shoot from the outside down the stretch, making just 7 of 33 shots from 3-point range in the final five games, but overall had a tremendous career for the Broncos and will be missed.

Forward Abu Kigab was the only other senior on the roster, and he went through Senior Night festivities against Fresno State on March 2. The NCAA granted all players an extra year of eligibility due to the COVID-19 pandemic, and Kigab likely will take advantage and return. He was originally expected to test the NBA waters before making a decision, but suffered a torn labrum in that Fresno State game. The injury won’t allow him to do any NBA workouts this summer and probably means he’ll choose to come back for another season next year.

POTENTIAL TRANSFERS: News broke Tuesday afternoon of Dennis electing to transfer from Boise State. He averaged 8.6 ppg but struggled down the stretch and lost his starting spot for the final three games.

It’s not that surprising Dennis elected to transfer, and he may not be the only one to go. It’s impossible to keep everybody happy, and a new rule expected to go into effect this offseason would allow players a one-time transfer without having to sit out a season. That’s already led to a record number of players in the transfer portal, and there’s no reason to believe the Broncos won’t see some turnover as well.

Kasean Pryor, who played just 16 total minutes in five games, might be another candidate to seek a bigger role elsewhere because he likely wouldn’t see much playing time next season either.

RETURNERS: Boise State should return a strong nucleus, which is why expectations will again be high next season. Mladen Armus was maybe Boise State’s most improved player and could be an All-Mountain West center next season. Arizona transfers Devonaire Doutrive and Emmanuel Akot both slid into the starting lineup late in the year and could also emerge as all-league type players. Marcus Shaver Jr. also is back after reaching double figures in four of the last five games and finished third on the team in scoring at 10.6 points per game.

Reserve guard Max Rice had multiple surgeries on his hip and foot, but he should be recovered by the start of the season. He provides a scoring threat from 3-point range and should continue to develop. Lukas Milner emerged as a viable option on the interior as a backup to Armus and appears to have plenty of potential moving forward.

Guards Pavle Kuzmanovic and Donovan Ivory and forwards Naje Smith and Burke Smith didn’t play much last season, but Rice said he expects many of them to contribute next season.

NEWCOMERS: Boise State signed two highly touted prep prospects in R.J. Keene and Tyson Degenhart. Keane, a 6-foot-7 small forward from Concordia Lutheran in Houston, scored more than 2,000 points in his prep career and was rated as a three-star prospect. He picked the Broncos over Utah State, Wyoming, Hawaii and several other mid-majors. He’s the fifth-highest prep signing in program history according to the 247Sports composite rankings. Degenhart is a 6-8 forward from Spokane that committed early to the Broncos. He was named the Greater Spokane League MVP and was an all-state selection a year ago. He’s got plenty of potential and appears to be a strong fit for Boise State’s up-tempo offense.

Boise State also figures to hit the transfer portal hard. The Broncos currently have one scholarship available, but will have more if anyone else chooses to leave. Boise State could use an outside shooter who could help stretch the floor.

Many frustrated fans don’t want to hear the ‘wait until next year’ takes, but the Broncos appear to have a roster that should be better next season. Throw in a more normal offseason and a full 31-game regular season schedule, and the Broncos should again find themselves in contention for an NCAA Tournament bid.

The 2020-21 season fell short, but the Broncos are optimistic next year’s group could be the one to finally break through.

“Oh absolutely,” Rice told the Idaho Press. “I love them. They are great to be around, they are competitors, a lot of these guys hadn’t played for a year. We’re going to get Devonaire’s body right and Emmanuel’s body right, they had some knee stuff going on that we’re going to get right in the offseason, so maybe we don’t have the power outage at the end.

“We have two great guys coming in that we signed and they are special and will fit right in with the guys we have. We also had some great guys that people never saw that would have redshirted in a normal year, but the work they did in the dark was noticed by me and they are going to be good. It’s exciting. I love this team, I love the guys I get to coach, and I am looking forward to next year.”