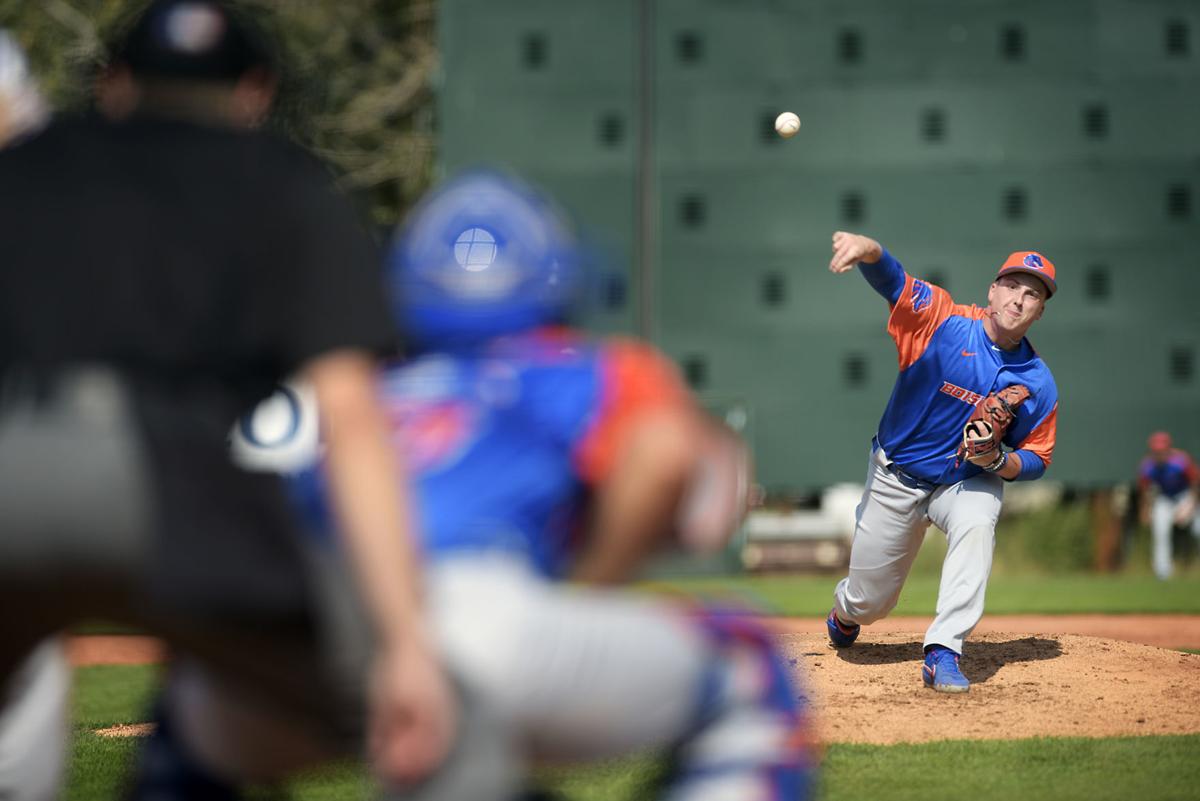 Boise State junior Mitch Lines (36) pitches the ball during a scrimmage at Memorial Stadium in Garden City on Sept. 10, 2019. Lines will start the second game of the season Saturday at Texas. 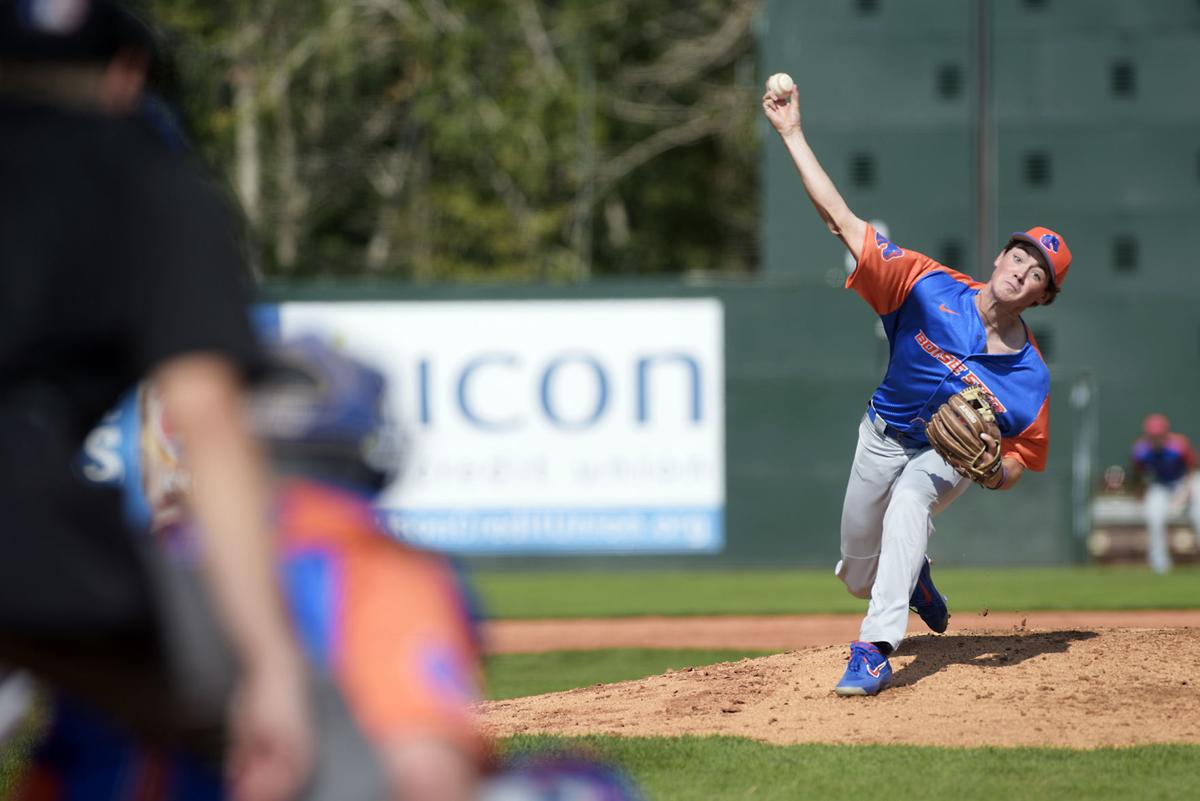 Boise State freshman Hunter Omlid (31) pitches the ball during a scrimmage at Memorial Stadium in Garden City on Tuesday, Sept. 10. 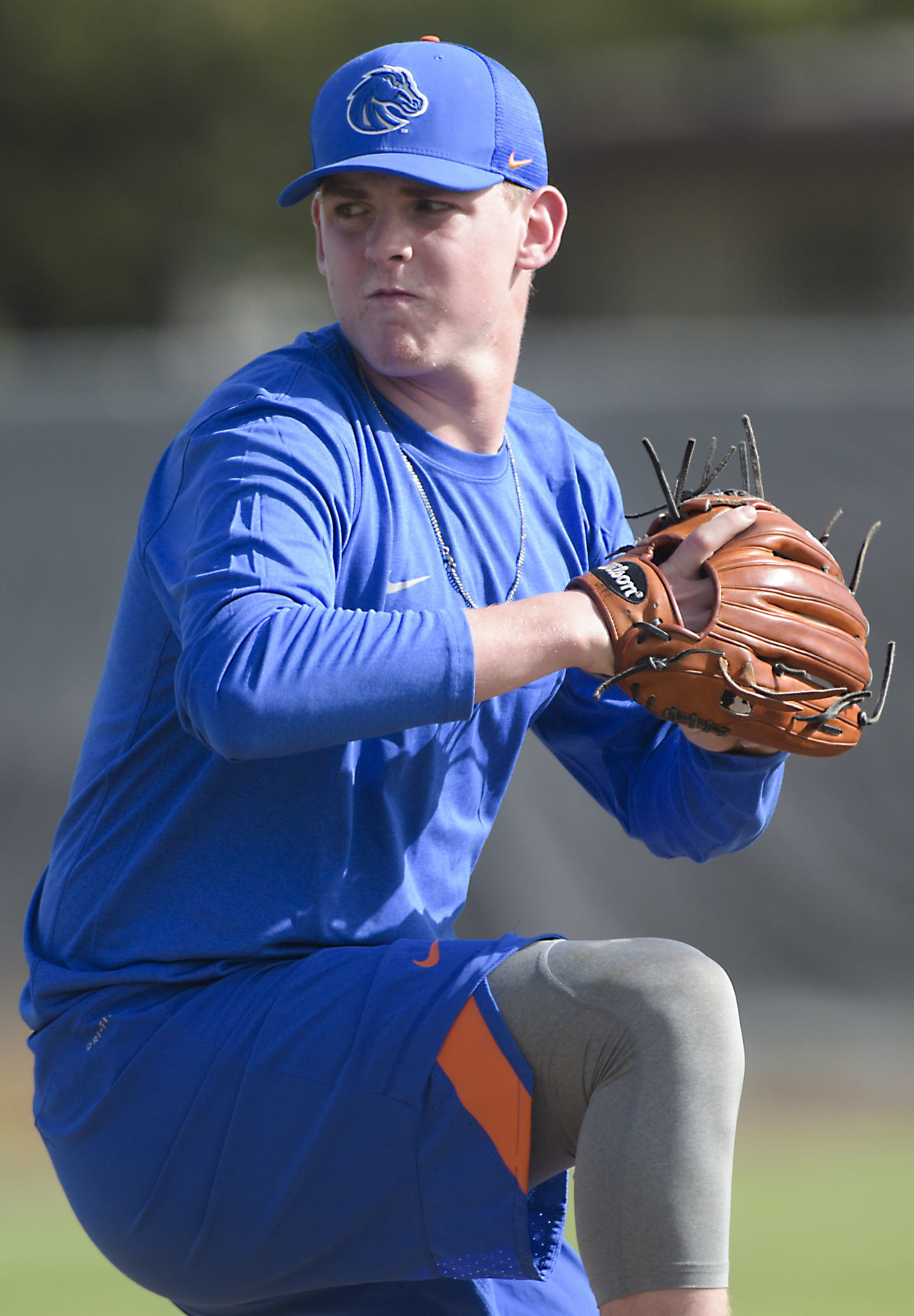 Boise State pitcher Gavin Gorrell winds up for a pitch during live hitting and pitching drills on September 21, 2018 at Fort Boise Park.

Boise State junior Mitch Lines (36) pitches the ball during a scrimmage at Memorial Stadium in Garden City on Sept. 10, 2019. Lines will start the second game of the season Saturday at Texas.

Boise State freshman Hunter Omlid (31) pitches the ball during a scrimmage at Memorial Stadium in Garden City on Tuesday, Sept. 10.

Boise State pitcher Gavin Gorrell winds up for a pitch during live hitting and pitching drills on September 21, 2018 at Fort Boise Park.

BOISE — The University of Texas Longhorns will have already played five games when the Boise State baseball team travels to play them Friday night in Austin to kick off the Broncos’ first season back on the diamond in 40 years.

And the pitching staff may be where you notice the biggest difference.

Boise State’s three weekend starters will all be on a 75-pitch limit in their season opening starts as they continue to build up arm strength in the middle of February.

“We’re not at 100 percent by any means,” Boise State coach Gary Van Tol said Monday. “I know our guys are going to be amped up, but it’s the middle of February and we have to follow that progression and build our guys up. We’re not winning a championship this weekend. We have to have patience with our guys.”

Van Tol announced Monday that left-handed pitcher Travis Weston will get the start Friday night at Texas, which is ranked No. 22 in the country by Collegiate Baseball after sweeping Rice to start their season last weekend. Right-hander Mitch Lines will start Saturday and lefty Dawson Day will go on Sunday.

All three are transfers with previous college experience.

“Three veteran guys that have had some key innings under their belt before they even got here,” Van Tol said. “They’ve earned that opportunity this weekend to get a start. … If we can get five innings out of our three starters this weekend, we’ll be on track.”

The Broncos had projected left-hander Jordan Britton, a Caldwell native and transfer from Oregon State, to be the No. 1 pitcher this spring. But he’s still dealing with a lingering injury and the hope now is that he’ll be ready by the start of conference play.

“He knew at the end of the fall that he’d get the ball Friday night at Texas, but he’s just not ready yet,” Van Tol said. “This is his last year, so when we look at those 21 playoff games when we get to conference play, that’s the target we have now. He’s disappointed and frustrated, but he is feeling good. He just needs more time.”

Van Tol plans to rely on a pair of freshmen for key roles in the bullpen in Hunter Omlid and Jay Baggs. Redshirt senior Cameron Sommer, a side-armer, also will be counted on early in the year out of the bullpen.

“I’ll take my chances that those three guys can each get three outs for us, no problem,” Van Tol said.

Here’s a closer look at some of the pitchers projected to have key roles for the Broncos this season:

The left-hander started his career at Mountain West rival San Diego State, but transferred to Ventura College (Calif.) after redshirting with the Aztecs in 2018. He went 8-3 with two saves and had 64 strikeouts in 75 1/3 innings last spring at Ventura College and was named to the All-Western State Conference North First Team. Weston posted a 0.92 ERA and had 73 strikeouts in 68 2/3 innings as a senior at Moorpark (Calif.) High in 2017. He was slated to start later in the weekend, but the injury to Britton moved him up into the Friday night, weekend-opening spot.

Lines may end up being the only right-handed starter in Boise State’s rotation this spring. The Hockinson, Washington, native joins the Broncos after two strong years at Lower Columbia College (Wash.). He went 7-1 with a 2.12 ERA in 12 appearances in 2019 while striking out 72 guys in 76 1/3 innings. The year before, as a freshman, he had a 1.94 ERA in 55 2/3 innings while posting a 6-0 record over 11 games. Lines was named to the all-region first team both years.

The Gresham, Oregon, native was named the 2017 Oregon Baseball Player of the Year as a senior in high school. He started his college career at Seattle University, where he appeared in 17 games and posted a 1-1 record and a 5.09 ERA. He held opponents scoreless in seven of the 17 games. Day then transferred to Mount Hood Community College in his hometown for his sophomore year in 2019 and posted a 3.15 ERA in 60 innings. He had 104 strikeouts to just 34 hits over 14 appearances (13 starts) while earning NWAC Baseball Athlete of the Year honors.

The Northern Colorado transfer will be used both as a starter and out of the bullpen. He’ll start the season as the primary left-hander in the bullpen, but will likely get the chance to start midweek games for the Broncos. He had 21 strikeouts in 19 2/3 innings over eight games for Northern Colorado in 2018 before joining the Broncos as one of the 12 redshirts last year. He posted a 4.23 ERA in 38 1/3 innings last summer for the Wenatchee (Wash.) AppleSox of the West Coast League.

The Puyallup, Washington, native spent two years at Clark College (Wash.) and one season at the University of Texas Rio Grande Valley before redshirting with the Broncos last season. The side-arm pitcher should be a key member of the bullpen due to his funky delivery. He only pitched six innings last year at UTRGV, but had a 1.18 ERA in 30 1/3 innings as a sophomore at Clark College in 2017. The previous year in 2016 as a freshman, he had 30 strikeouts in 27 innings and had three saves in 15 relief appearances.

Omlid impressed enough during the offseason to earn a prominent role to start the season late in games out of the bullpen as a freshman. He hails from Hamilton, Montana, but was under-recruited because his high school did not field a baseball team. He instead played four years of high school basketball. He was a two-time All-State selection in American Legion Baseball over the summer. Van Tol said Omlid has a “promising future in our program” moving forward.

The freshman earned a late-inning role in the bullpen with a strong fall and winter. He played football, basketball and baseball at San Clemente High School in California and was named All-South Coast League in baseball as a sophomore and junior. He held opponents to a .225 batting average and struck out 8.72 batters per nine innings those two years. As a senior, he was named All-SCL in football.