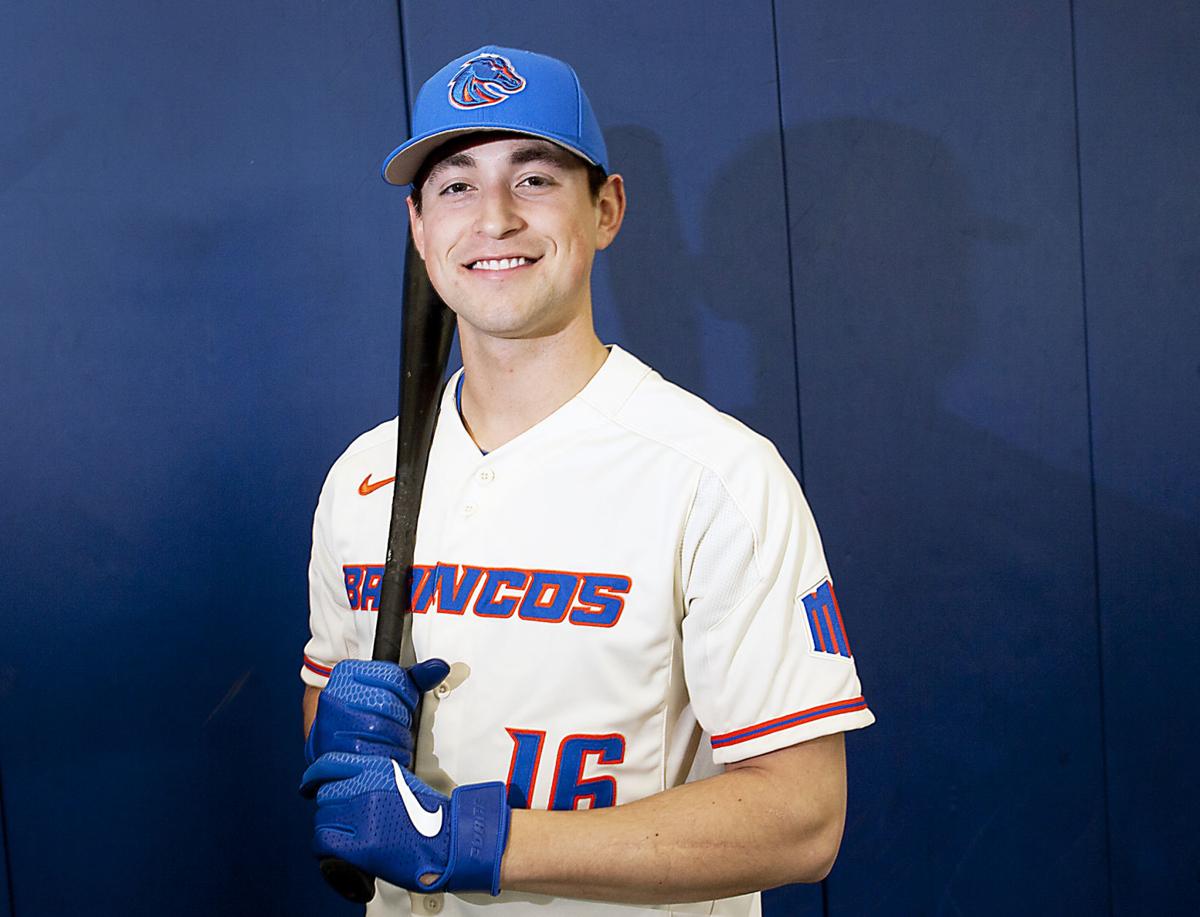 Boise State junior Christian Padilla poses for a photo prior to practice on Wednesday. 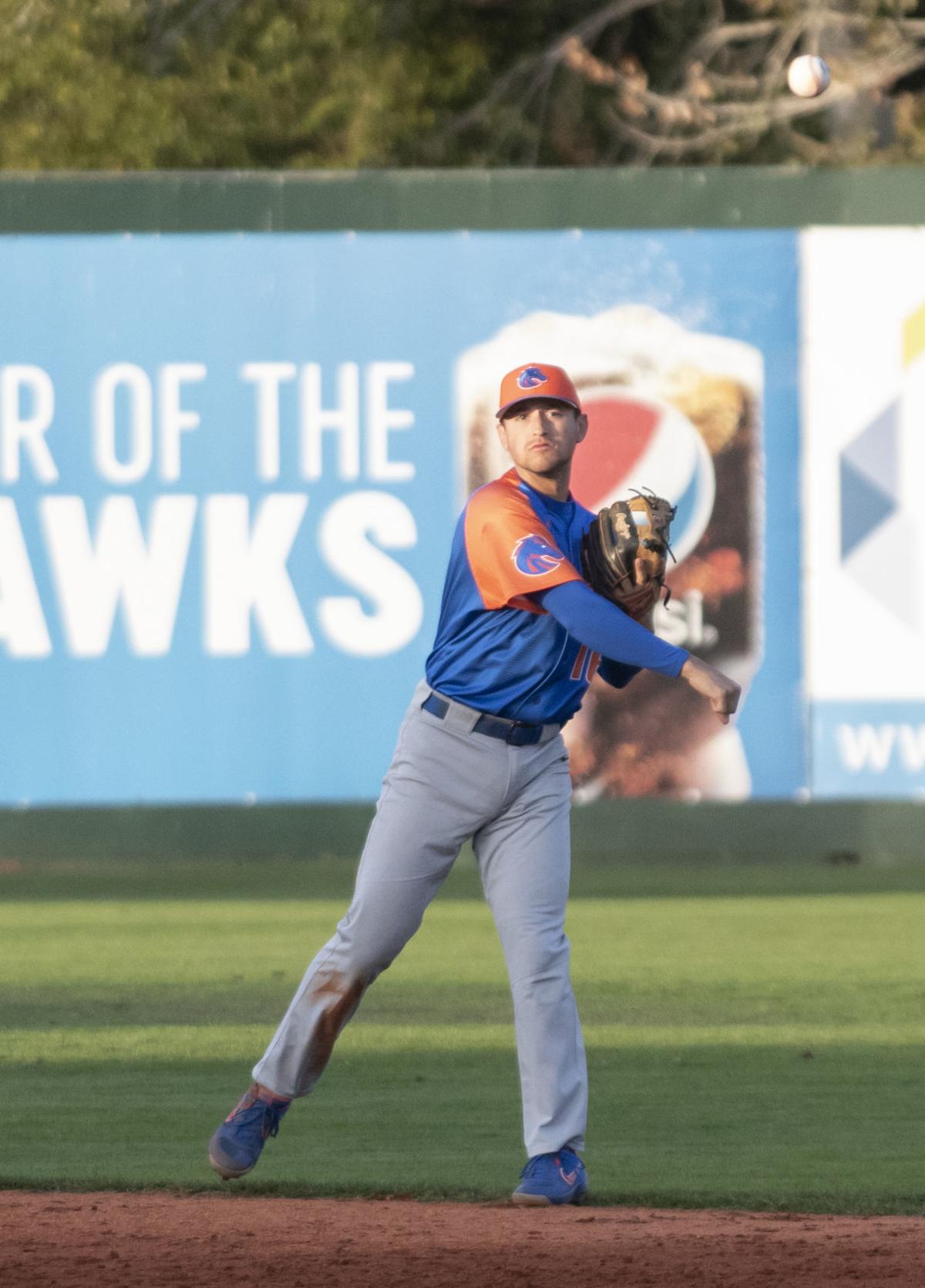 Boise State second baseman Christian Padilla throws the ball to first base after fielding a ground ball during a fall scrimmage against Northwest Nazarene on Oct. 4. 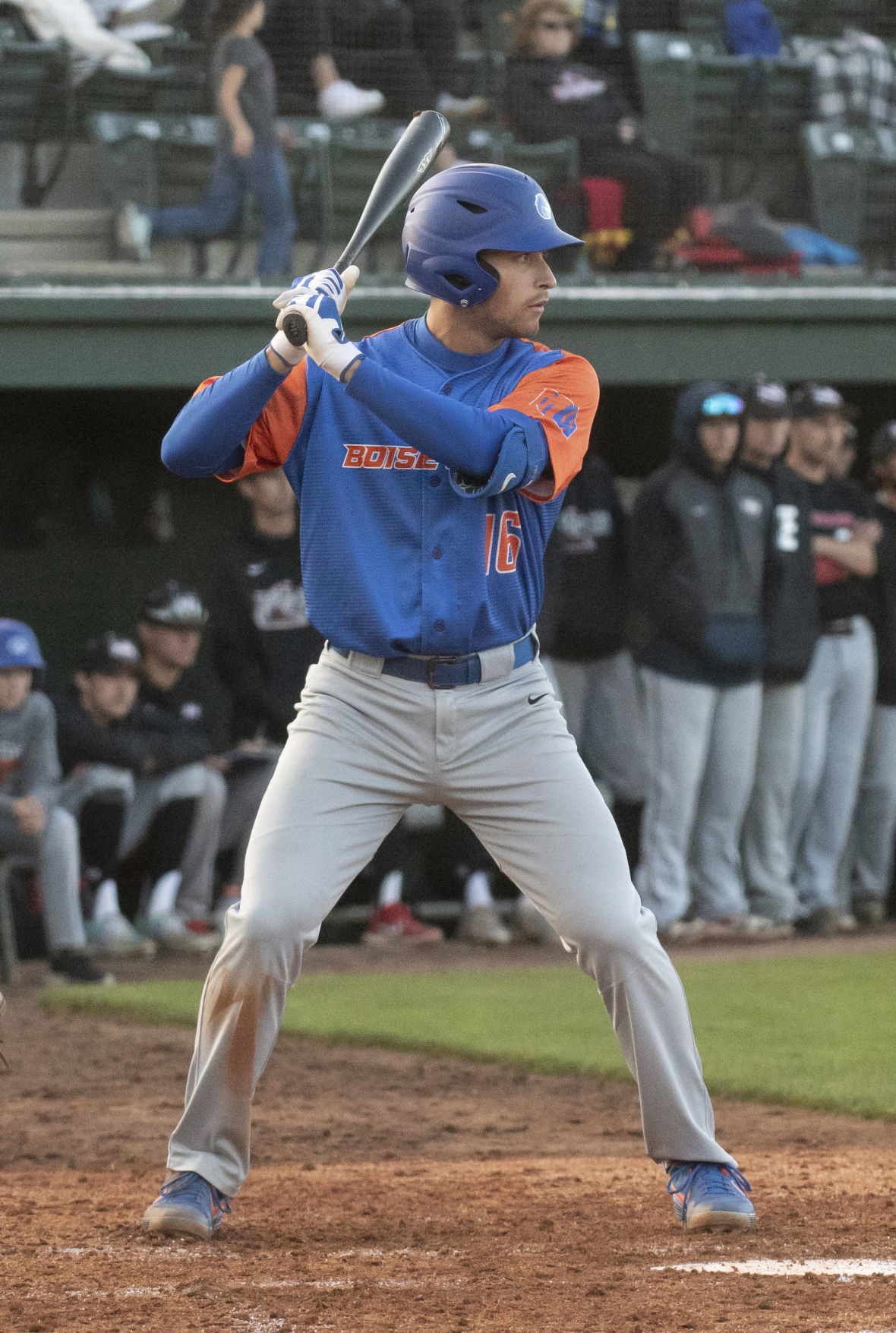 Former Eagle High School product Christian Padilla waits for a pitch while batting against Northwest Nazarene during a fall scrimmage on Oct. 4. 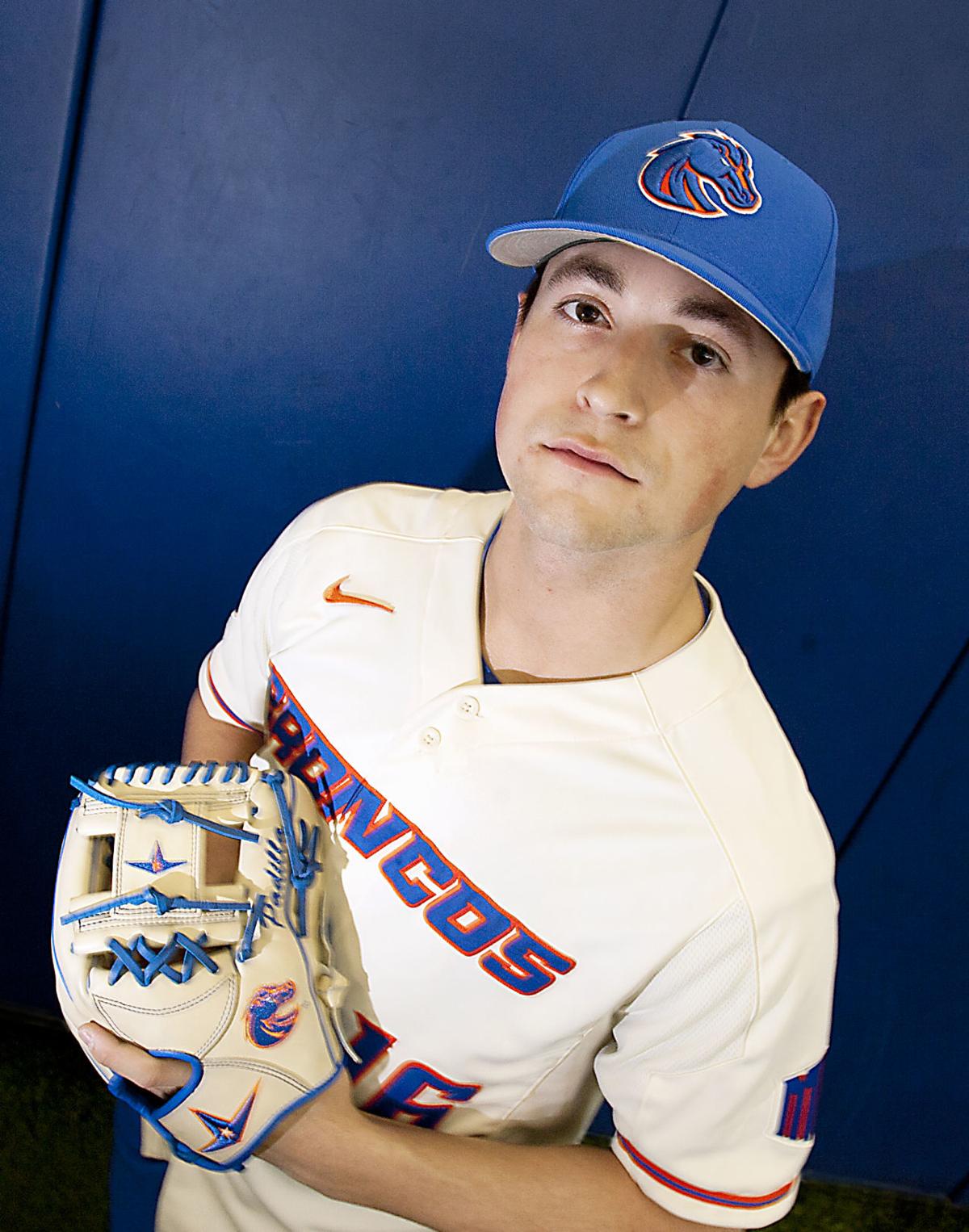 Boise State junior Christian Padilla poses for a photo prior to baseball practice at BSU's indoor practice facility on Wednesday. 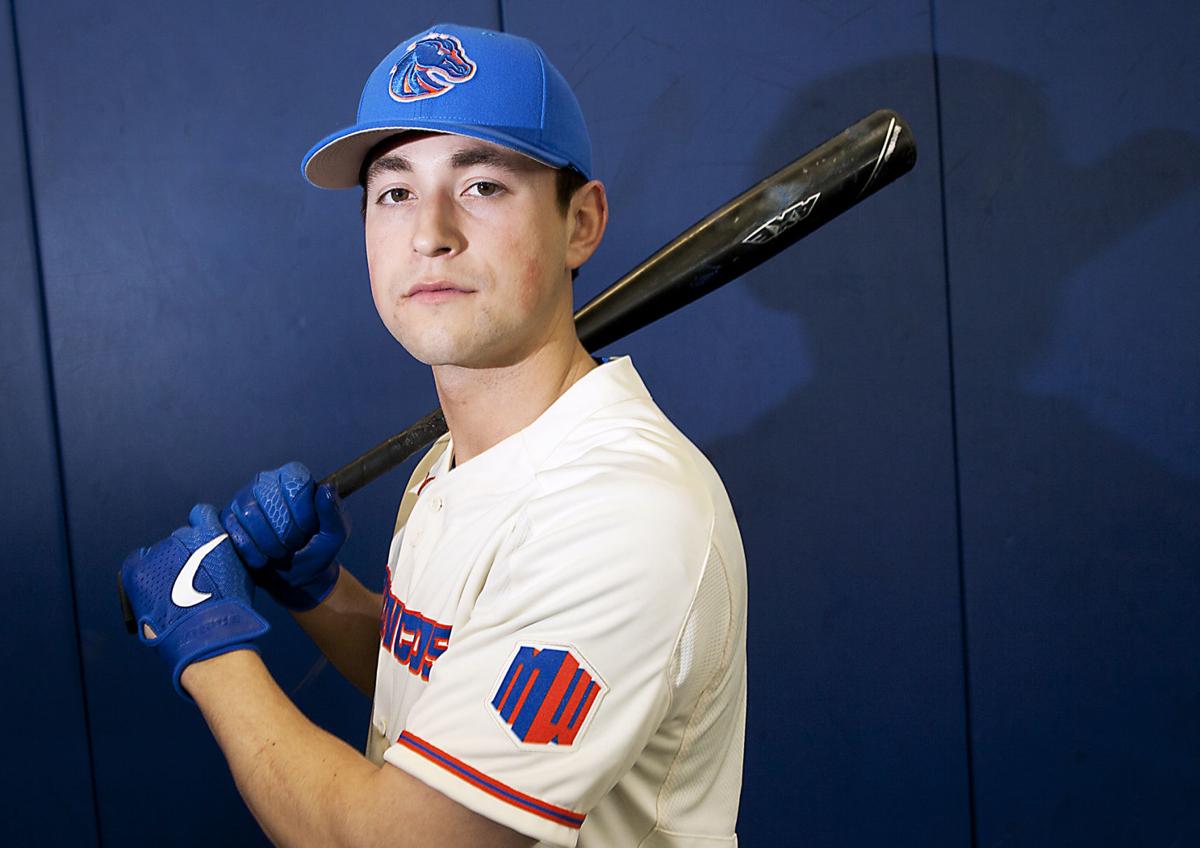 Boise State junior Christian Padilla poses for a photo prior to baseball practice at BSU’s indoor practice facility on Wednesday.

Boise State junior Christian Padilla poses for a photo prior to practice on Wednesday.

Boise State second baseman Christian Padilla throws the ball to first base after fielding a ground ball during a fall scrimmage against Northwest Nazarene on Oct. 4.

Former Eagle High School product Christian Padilla waits for a pitch while batting against Northwest Nazarene during a fall scrimmage on Oct. 4.

Boise State junior Christian Padilla poses for a photo prior to baseball practice at BSU's indoor practice facility on Wednesday.

Boise State junior Christian Padilla poses for a photo prior to baseball practice at BSU’s indoor practice facility on Wednesday.

BOISE — Former Eagle High School standout Christian Padilla was enjoying his time at Spokane Falls Community College but unsure what he’d do when his two years there ran out.

Boise State was bringing back the baseball program after a 40-year break and Van Tol, the team’s newly hired head coach, wanted Padilla to join the squad for the inaugural season in 2020.

“I really didn’t expect it so it was kind of a shock when he asked me if I wanted to come here,” Padilla said. “But it was a no-brainer.”

Padilla played at Eagle from 2015-18 and was a All-Southern Idaho Conference first-team selection as a senior and a second team All-SIC pick as a junior. But with no option for Division I baseball in the state of Idaho at the time, he elected to start his college career at Spokane Falls.

He hit .278 and had eight home runs as a freshman and .297 with five home runs as a sophomore while being named all-region both years. He originally had hoped to continue his college career somewhere warm, but changed course when he heard the Broncos were starting a program in his hometown.

“Once Gary called me I didn’t think about the warm weather anymore,” said the junior Padilla. “I thought ‘let’s go play for Gary.’”

Padilla, catcher Cory Meyer and a few others knew Van Tol and other members of the coaching staff from their days with the Idaho Cubs. Van Tol ran a program for some of the top youth players in the area, and that was the connection Gary first used to try and recruit players to join Boise State’s team.

But it didn’t take much convincing for Padilla, who jumped at the thought of being part of history as the Broncos field a team this spring for the first time since 1980.

“I’m kind of the hometown hero now,” Padilla joked. “I know all my parents, friends, the whole high school baseball community, they are excited. My parents are happy they don’t have to drive six hours to see me play anymore. It’s only 15 minutes now. That’s huge.

“I also get to go home every Saturday and get a free dinner, so that’s nice.”

A projected lineup from Van Tol two weeks ahead of the historic first game at Texas has the right-handed hitting Padilla batting second and playing second base.

The 6-foot, 180-pound Padilla played both infield and outfield during his career and likely will end up playing both for the Broncos at some point as well.

“He’s kind an X-factor type guy because of his skill set and his athleticism,” Van Tol said. “We recruited him as a utility-type player. He can play anywhere on the field, probably besides catching. He’s got arm strength, he can run, he’s athletic.

“He’s the only guy we have that brings the skill set he brings to the field every day. It’s not an easy role to have because he’s basically got to have three gloves in his bag and we’re asking him to hit near the top of the order.”

Van Tol noted a play Padilla made in a fall scrimmage against Montana State-Billings where he speared a line drive in the hole at shortstop and spun and made a perfect throw to first to double off the runner.

“You just don’t see that type of play very often,” Van Tol said. “It’s just trying to get him to play with that kind of consistency, because he’ll turn around and boot a routine ground ball, too.”

Asked how to describe himself as a player, Padilla said, “I like to hit the ball and run around the bases. Mostly just getting singles and running fast, maybe making a cool play here and there. I’m just the guy that tries to do it all for the team.”

Van Tol said having a player with Padilla’s versatility will be important for a first-year program still trying to build dependable depth across the field and throughout the lineup.

“He’s got some power, he can run. He’s got all the tools,” Van Tol said. “If he can put it all together, I think he’ll have a chance to play after college. He’s just scratching the surface. He’s always been that good athlete and I’ve known him since he was 13.

“He’s going to be an exciting player to watch. He can steal a bag, the range he has in the infield, the arm strength he has for the outside. He can play anywhere in the outfield or infield. As I said, he’s the X-factor.”

The X-factor for Padilla in his decision to come home and play for the Broncos? He might get some help from mom with his laundry.

“That’s a huge plus,” Padilla said with a smile.

Boise State’s first game in 40 years is set for Feb. 21 at 6 p.m. at Texas, the program with the most appearances in College World Series history. The game will be televised nationally on the Longhorn Network.