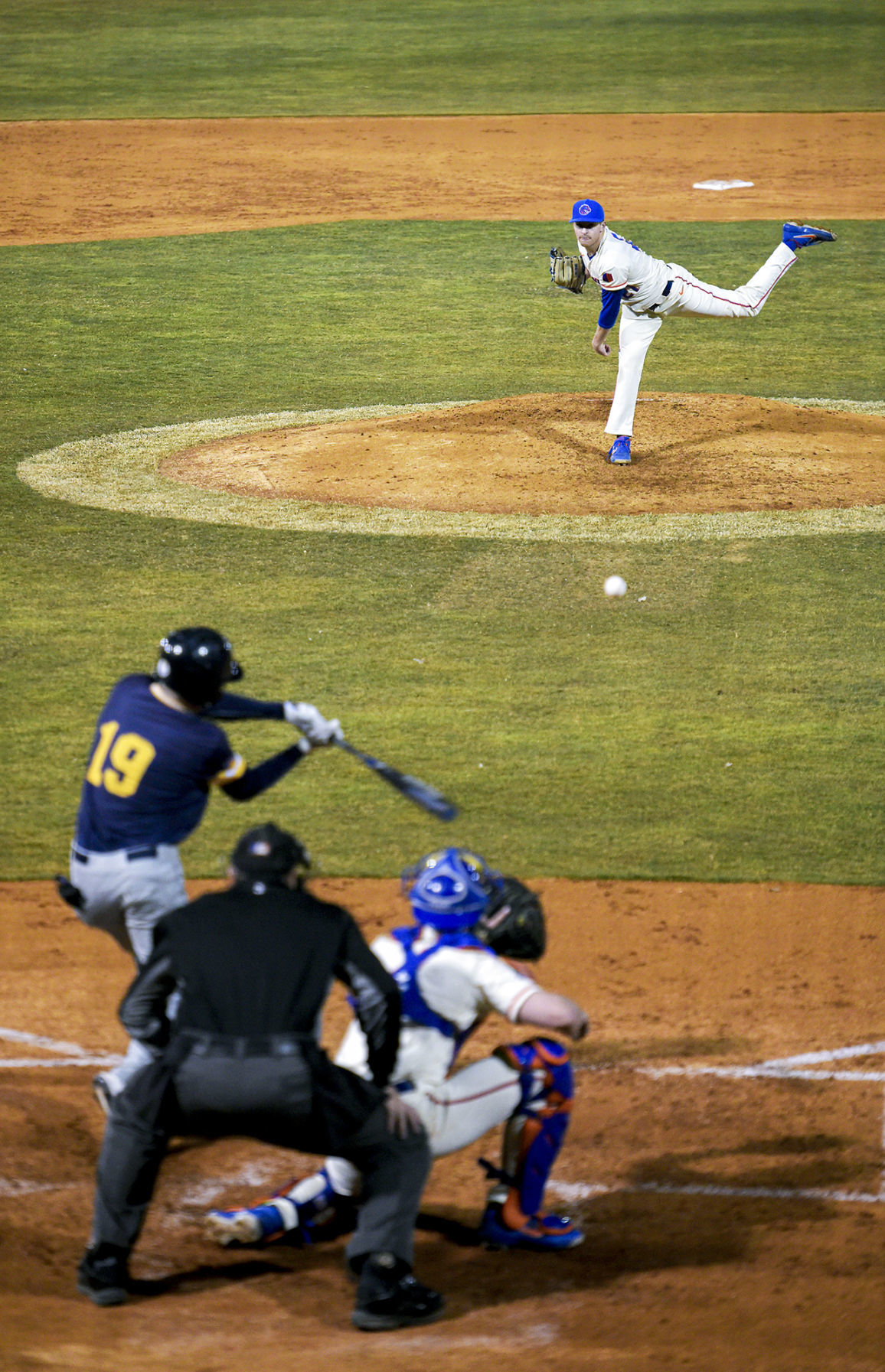 Boise State head coach Gary Van Tol walks toward the dugout after meeting with umpires at home base before the start of the home opener against Northern Colorado on Feb. 28 at Memorial Stadium in Garden City. 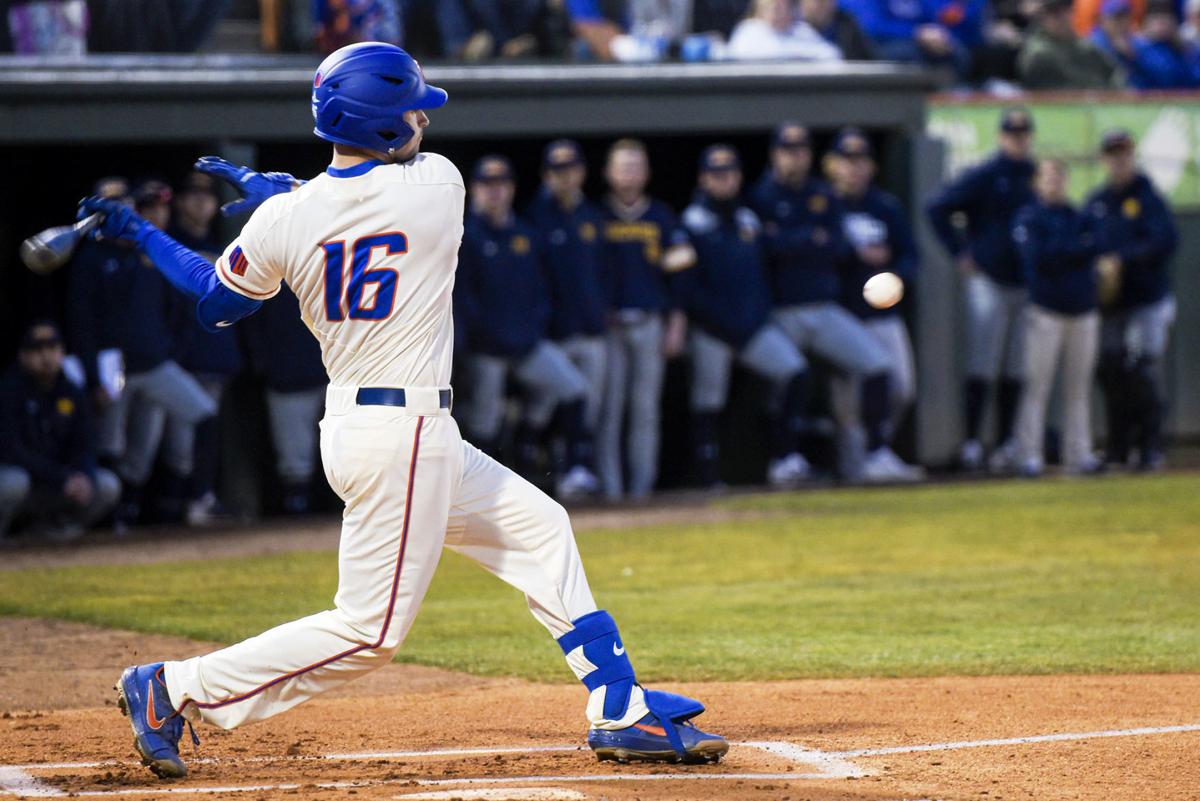 Boise State junior Christian Padilla (16) hits the ball during the game against Northern Colorado on Feb. 28 at Memorial Stadium in Garden City.

Boise State head coach Gary Van Tol walks toward the dugout after meeting with umpires at home base before the start of the home opener against Northern Colorado on Feb. 28 at Memorial Stadium in Garden City.

Boise State junior Christian Padilla (16) hits the ball during the game against Northern Colorado on Feb. 28 at Memorial Stadium in Garden City.

BOISE — With no games to play or practices to conduct, Boise State baseball coach Gary Van Tol has resorted to doing one of the only things he can these days — re-watching games from earlier this season.

After more than a two-year buildup to bring the baseball program back from scratch after a 40-year hiatus, Van Tol and the Broncos got to play 14 games before the season was canceled due to the COVID-19 outbreak.

“I feel like Chevy Chase in Christmas Vacation when he got locked in the attic and he’s pulling out old home movies and putting on old clothes and reminiscing,” Van Tol told the Idaho Press. “I’ve caught myself doing that the last four or five days, watching the Texas series again on TV and a few others. I watched our home opener again last night. It’s surreal and the emotions are just off the charts thinking about our guys.”

Van Tol was hired late in 2017, and the Broncos had 12 players on campus for redshirt years during the 2018-19 school year. The full 32-player roster arrived last fall, and the Broncos took the field for the first time since 1980 in their season opener at No. 22 Texas on Feb. 21.

The Broncos had just four hits and struck out an eye-popping 16 times in a 7-0 loss that night. But they competed much better the next two games, falling in extra innings in one game and by one run in the other.

Boise State returned to Boise for the first home game since 1980 and topped Northern Colorado, 4-0. The Broncos went on to sweep the four-game series, and were 9-2 on an 11-game homestand. The offense came alive, scoring at least seven runs in eight of their final nine games.

But as the team was getting set to leave for a road series at Utah Valley, word came down from the NCAA that the College World Series and the other spring sports championships had been canceled. The Mountain West canceled the rest of the baseball season a short time later.

“We were on track. We were on schedule. We were just getting this train rolling,” Van Tol said. “The identity of our team was starting to finally form, who the leaders were going to be. The cool thing about it was in the short stretch, everyone had an impact. Everybody played, and everybody was understanding of their role and they were embracing it and buying into it. Guys were excited to come to the park every day.

“I know everybody’s motto next year is going to be ‘unfinished business’ when we get this thing back to normal and under control. But right now our biggest opponent and enemy is this virus. We’re rolling up our sleeves and doing everything we can to beat this thing so we can get back together and keep this thing rolling.”

The Broncos finished with a 9-4 record, which was second-best among all Mountain West teams. Boise State also finished in the top half of the final RPI ranking, coming in at No. 148 out of 301 teams in the nation.

Individually, the Broncos had four players rank in the top 35 of D1Baseball.com’s final rankings of the top freshmen hitters in 2020 based on a formula that combines plate discipline, hit ability and game power. Matthew Farman ranked No. 5, Reagan Doss was No. 21, Rocky Mountain alum Kase Ogata was No. 23 and Torin Montgomery was No. 33.

Michael Hicks led the Broncos with a .386 average and had eight doubles, a home run, 11 RBI and 11 runs scored. Montgomery led the Broncos with three home runs while hitting .308 and slugging a team high .615. Geon Hyong Kim, Joe Yorke and Christian Padilla also were having success at the plate.

Closer Wesley Harper (1.76 ERA, two saves) was the standout on the mound through three weeks, while Travis Weston and Mitch Lines were leading the starting rotation. Others, including Hunter Omlid, Stu Flesland and Cameron Sommer, had impressive moments as well.

“I think a lot of people were surprised (with how well they played),” Van Tol said. “But we had 32 guys in that locker room and a coaching staff that were even a little disappointed with our record. We were competing and every guy was chipping in and putting their chips on the table to compete, whether it was the pitching one day with Flesland or Weston or the offense picking us up.

“When you look at the Friday night in Texas and just being absolutely overmatched, to each game little by little, we were starting to get things rolling.”

Boise State had just four seniors on the roster, and they’ll likely soon have an interesting decision to make. The NCAA is expected to grant an extra year of eligibility to spring sports athletes since their seasons were cut short less than halfway through.

Hicks, catcher Cory Meyer and pitchers Sommer and Jordan Britton will have to weigh whether to return next year, look to try and start a professional career or move on from baseball entirely. Van Tol confirmed that he offered the four seniors all a spot back on the team next season if they want it.

“We had to throw some scenarios at them and get those guys to think hard about what direction they want to go,” Van Tol said. “I said nobody was prepared to have this conversation right now, but we need to have it. And here are your three options. … I said if the NCAA grants the year back, I’m going to offer you this year back if you want to come back and take care of unfinished business and have one more go at this.”

Van Tol said Meyer likely would return if given the chance by the NCAA since he already planned to stay and enroll in graduate school at Boise State next year. Hicks might have a chance at getting drafted or signing as an undrafted free agent, but might decide to come back as well.

“We’re not going to find another Michael Hicks anywhere on the planet with his skillset and his power,” Van Tol said. “If he comes back we’re going to be pretty fired up.”

Boise State has only signed one player in the 2020 recruiting class, which helps the Broncos should the seniors elect to return. And with only four seniors, the Broncos won’t have a big problem with the roster next year like some teams with 10 or more seniors might have. The NCAA has yet to announce how they will handle roster and scholarship limits given the extra players returning next season.

“We’re in good shape from that standpoint,” Van Tol said. “At the end of the day I want to keep this group together as long as I can and if those seniors have an option to come back, that will be our first item of business on the roster and then we’ll go from there.”

Unlike the other spring sports at Boise State, the baseball team has most of its players scheduled to go play on collegiate summer teams. That means the pitchers need to keep throwing and the hitters need to keep hitting to stay in shape for those leagues — which may or may not happen themselves.

The Broncos continued to hold practices in small groups last week even after the season was canceled, but officially shut things down at 5 p.m. last Friday. Most players went home for spring break — and for the rest of the semester with classes at Boise State now online. Ten players elected to remain in Boise for the “long haul” as Van Tol put it.

“All our guys need to stay on schedule for the summer somehow, but at the end of the day that all gets thrown in the back seat because this is real life and it’s not about baseball anymore,” Van Tol said. “It’s about staying healthy and doing everything we can to hold off the spread of the virus in our communities and our neighborhoods.”

Van Tol said canceling the season early was a “crushing” blow to his players, many of whom waited more than a year to play for the Broncos. But he knows the foundation has been set for the team to have success next year — as hard as it may be to think that far ahead right now.

“It’s uncharted waters for everybody,” Van Tol said. “Nobody knows how long we’re going to be shut down. I guess it’s a good reflection and gut check to never take anything for granted and to play everyday like it might be your last.

“We were having a blast and it was everything we thought it was going to be. It was just cut way too short.”